The Screen Actors’ Guild Awards have long been been a bellwether for Oscar success, since actors make up the largest percentage of the Academy.

So all eyes were on the 26th annual SAG ceremony, which took place at the Shrine Auditorium in Los Angeles Sunday night.

And the stars descended upon the red carpet in their best, with Jennifer Aniston, Sophie Tuner and Scarlett Johansson leading the way.

Beautiful: Jennifer Aniston, Sophie Turner and Scarlett Johansson dazzled on the red carpet as they arrived at the SAG Awards on Sunday at the Shrine Auditorium

Jennifer, 50, turned heads in a slinky white gown that hugged her figure; the Friends star’s frock had a patterned hemline with a ruched accent along one hip and an asymmetrical neckline.

Sophie, 23, dazzled in her hot pink corset gown with a belt; the Game Of Thrones star wore her blonde hair loose and center parted.

Scarlett, 35, was an absolute bombshell in her emerald colored gown, complete with a plunging neckline and crystal encrusted straps in the back.

Scarlett’s arrival to the SAG Awards comes two days after she was ‘violently ill’ and couldn’t attend the Santa Barbara International Film Festival, according to ET Canada.

The star’s statement was read by SBIFF Executive Director Roger Durling, who also accepted her award on her behalf. Her statement read: ‘I am so saddened that I can not be here with you this evening. An hour-and-a-half ago, I became violently ill right as I was about to leave the Miramar Hotel for the theater. I was so looking forward to accepting this incredible honor in person, and to not be here on stage with Adam is deeply disappointing, to say the least,’ via People. 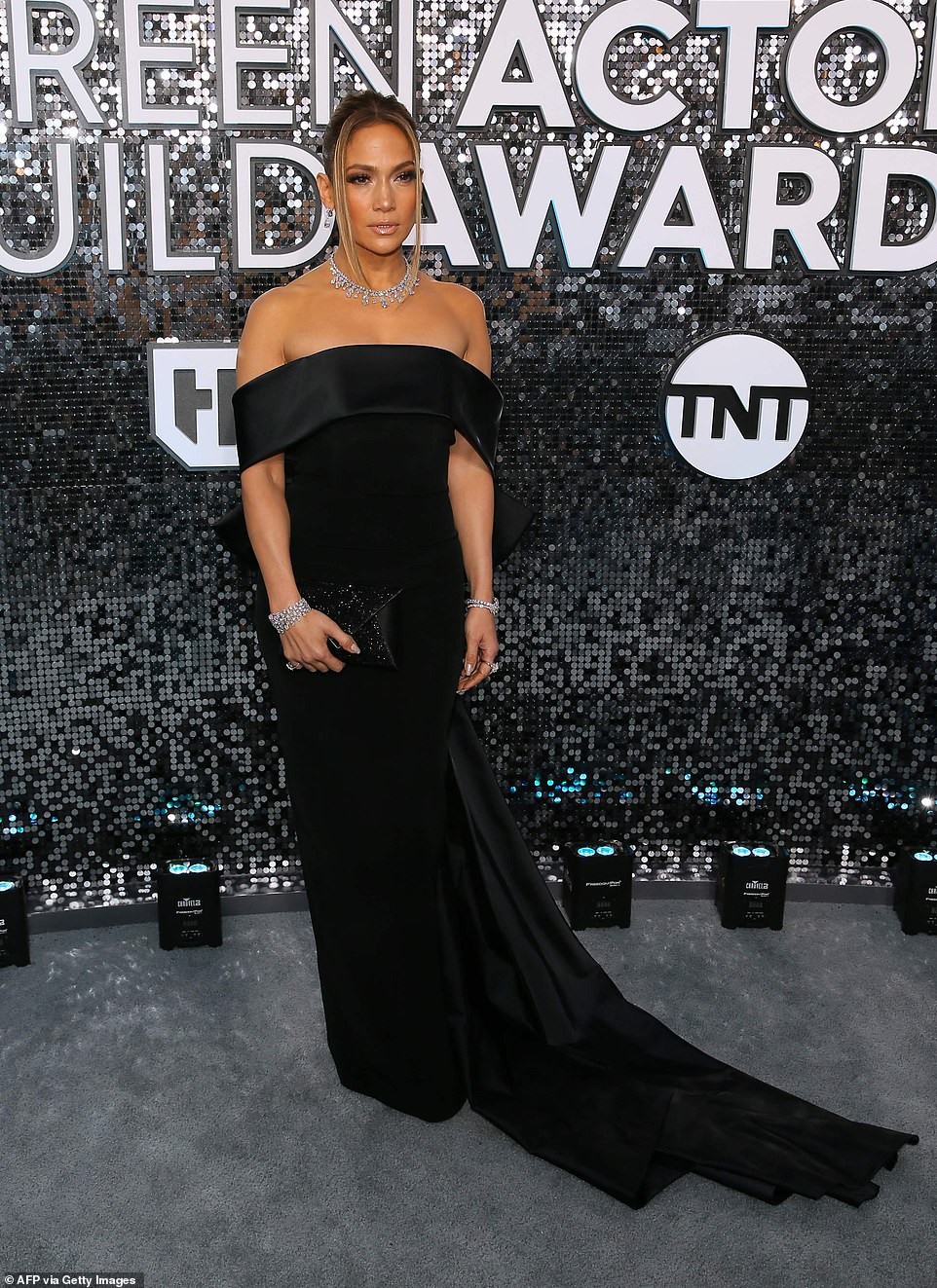 What an arrival: Jennifer Lopez, 50,  donned an off-the-shoulder black dress with over $9 million worth of Harry Winston jewelry

Sexy: Jennifer, 50, wore a formfitting white gown that she opted to rock braless 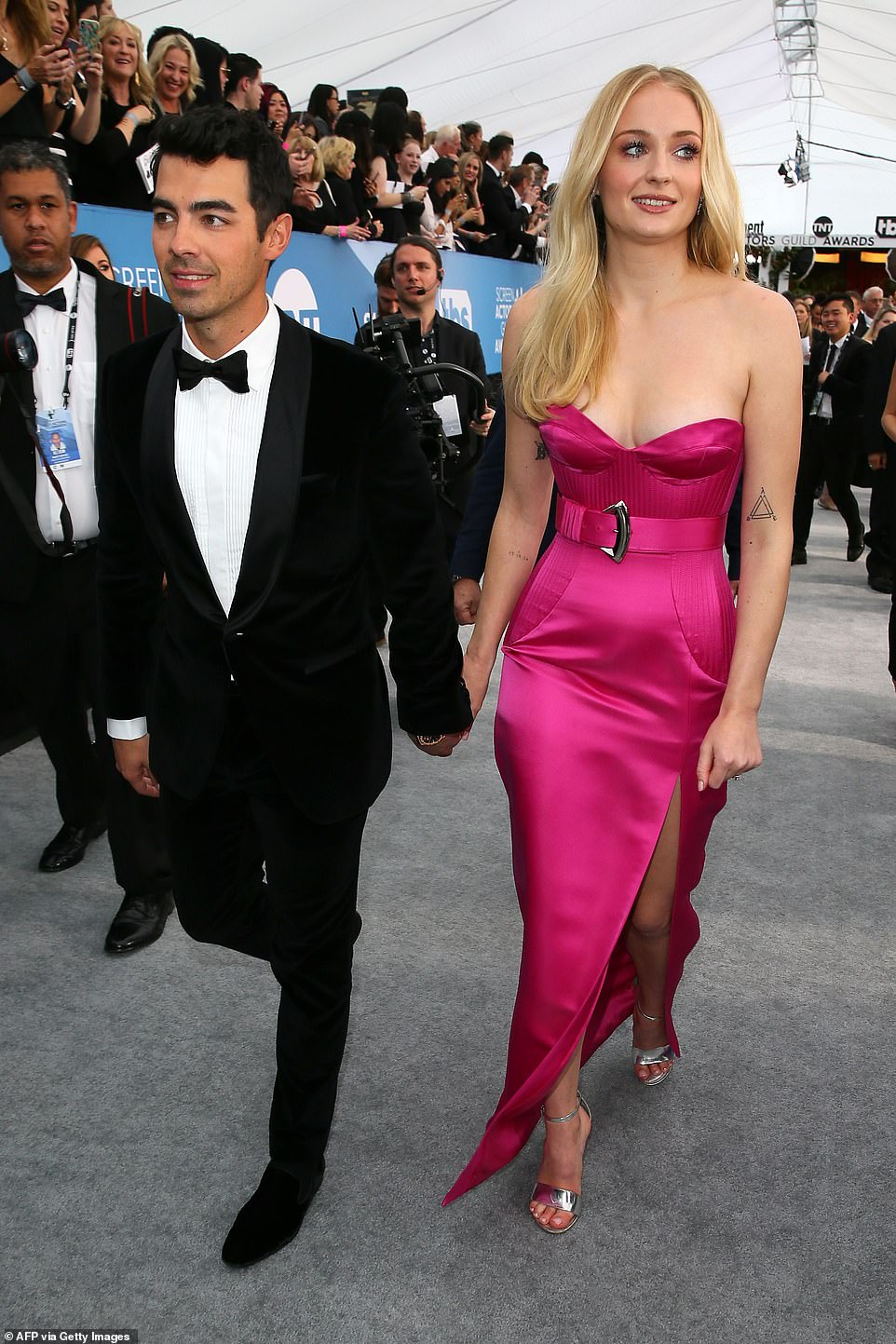 Date night: Sophie Turner and husband Joe Jonas beamed as they walked down the red carpet for the SAG Awards at the Shrine Auditorium in Los Angeles

Bombshell: Scarlett, 35, flashed her back tattoos in the shiny gown that had a low-cut neckline

In film, Once Upon A Time In Hollywood and The Irishman earned top honors, securing two individual actor nominations and the coveted Best Ensemble honor. Both were also nominated in the stunt ensemble category.

While Tarantino and Scorsese’s films both seemed like shoe-ins, there were also many surprises.

Like Once Upon A Time In Hollywood and The Irishman, Bombshell also dominated the individual acting categories, earning nominations for lead Charlize Theron and supporting players Nicole Kidman Margot Robbie. Their ensemble nom puts Bombshell in the same league as the critically-acclaimed Scorsese and Tarantino films. 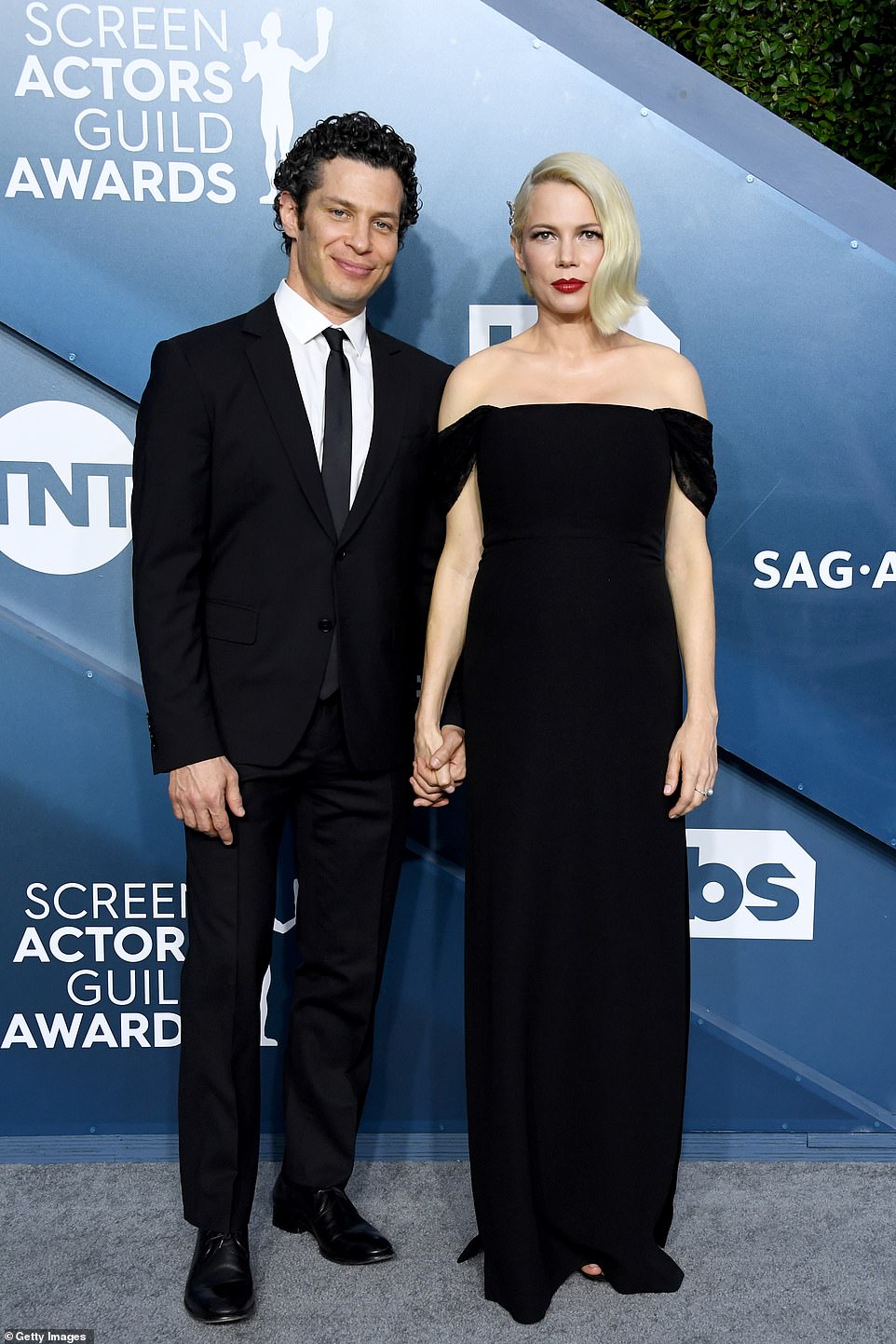 Glowing: Pregnant Michelle, 39, arrived with her fiance Thomas Kail to the awrds show

Parasite, the much-praised Korean film, makes history as just the second foreign language film to be nominated for the SAGs’ top award.

It still came away with acting nominations for its leads, Adam Driver and Scarlett Johansson, and Laura Dern for best female actor in a supporting role.

Johansson earned double noms for the evening, with a supporting nod for her performance in Jojo Rabbit as well. 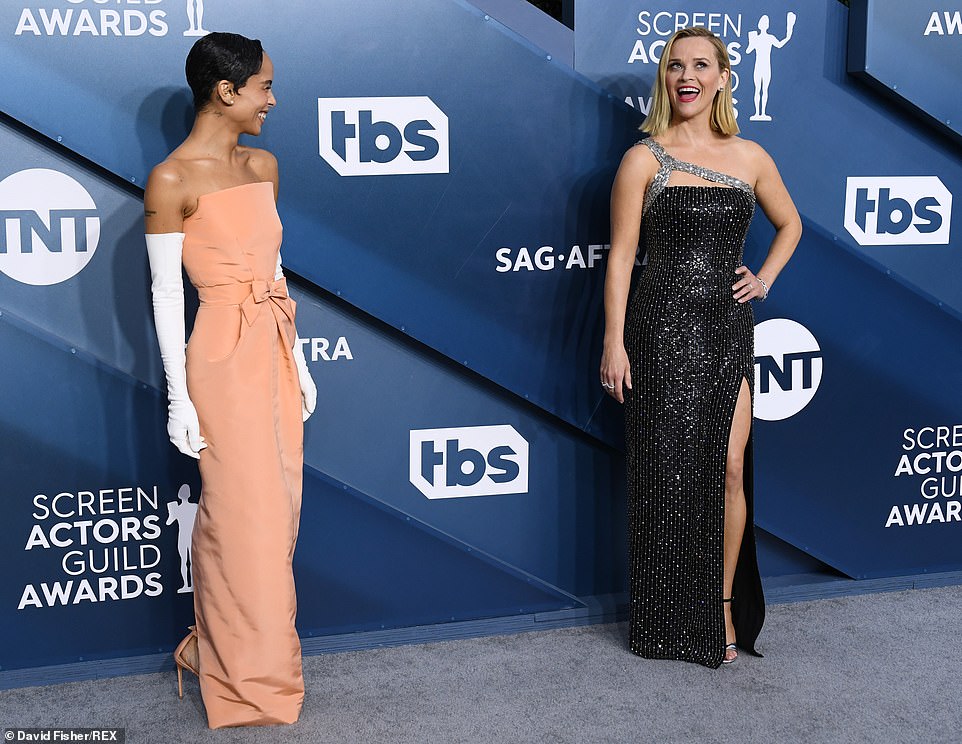 Co-stars: Zoe Kravitz shared a laugh with her Big Little Lies co-star Reese Witherspoon as they posed up a storm

Pretty in pattern: Margot Robbie was a vision in a plaid pleated gown, adding a chain bow belt and layers of gold jewelry

What a goddess: Jane Seymour, 68,(L)  looked stunning in a silver gown with diamond jewelry; Natalia Dyer, 25, cut a chic figure in a gold dress with a low-cut neckline

Wow factor: Dakota Fanning took the red carpet by storm in a chic beaded gown with cut-out details as she arrived to the SAG Awards in LA on Sunday

The nominees for best performance by a female actor in a leading role were: Marriage Story’s Johansson, Bombshell’s Theron, Cynthia Erivo of Harriet, Lupita Nyong’o for Jordan Peele’s horror romp Us and Renee Zellweger for the biopic Judy.

Those picks omitted Saoirse Ronan of Little Women and Awkwafina of The Farewell, whose performance earned her a Golden Globe earlier this month.

Among those left out were Antonio Banderas for Pain and Glory, Irishman lead Robert De Niro, Eddie Murphy for Dolemite Is My Name and Adam Sandler Uncut Gems. (While De Niro wasn’t given an acting nomination, he will be bestowing with the Life Achievement Award at the show.)

Tom Hanks (A Beautiful Day in the Neighborhood) and Jamie Foxx (Just Mercy) were nominated for best male actor in a supporting role.

And while she was snubbed by the Oscars, Jennifer Lopez could be adding to her trophy collection with a nom for best female in a supporting role category.

Things were a toss-up in the TV world. 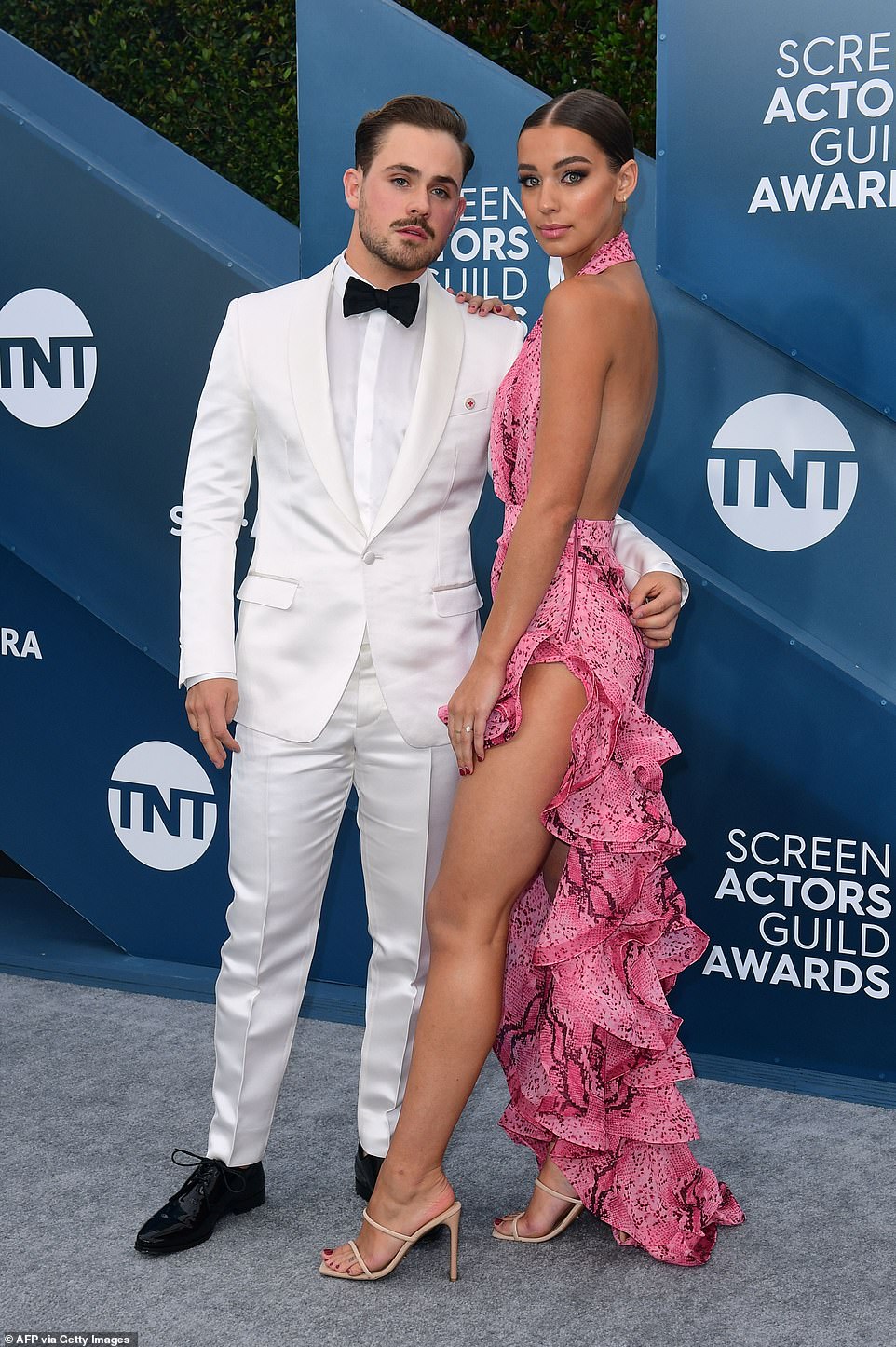 While Apple TV+’s The Morning Show earned three individual noms for supporting actors Steve Carell and Billy Crudup, and female lead Jennifer Aniston, they failed to get into the ensemble category.

In best drama series ensemble, the actors nominated the casts of Big Little Lies, The Crown, Game of Thrones, The Handmaid’s Tale and Stranger Things. 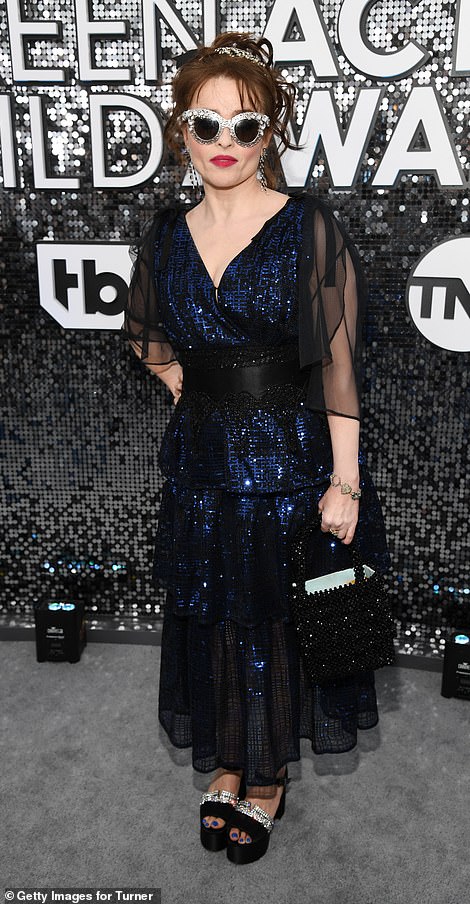 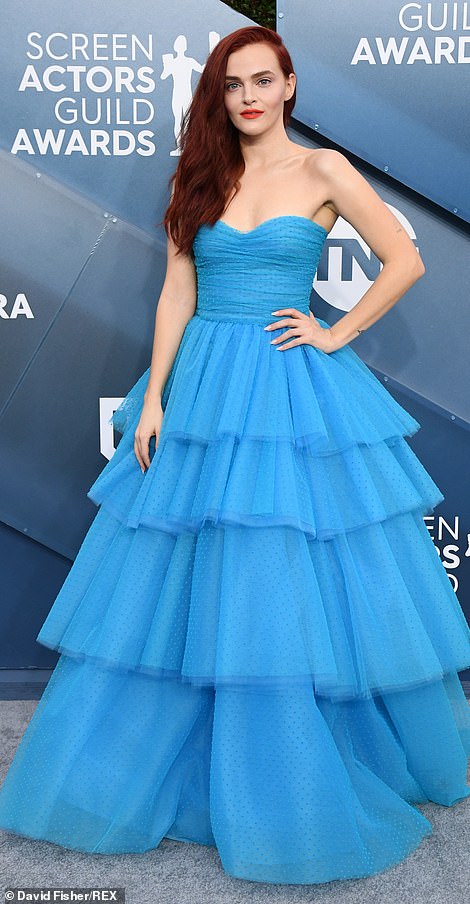 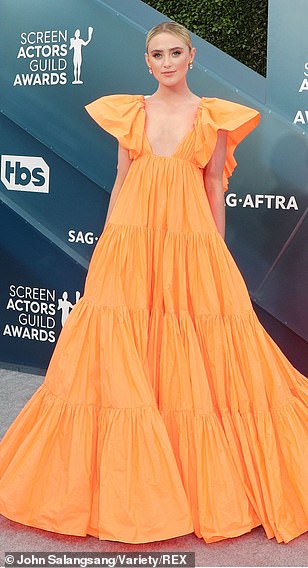 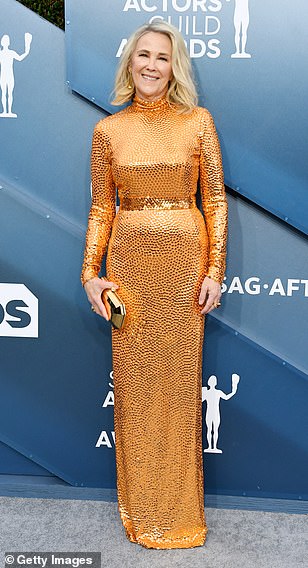 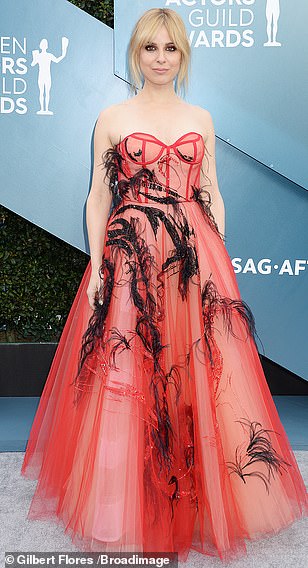 Recently, a SAG ensemble nomination hasn’t been quite as vital for a best-picture winner at the Oscars as in years past.

The last two winners, Green Book and The Shape of Water, managed the feat without a nod for the screen actors’ top award.

Before that, it had been two decades since the SAG Awards didn’t help predict the eventual best-picture winner.

Usually, about four out of five individual SAG nominees go on to land an Oscar nomination. 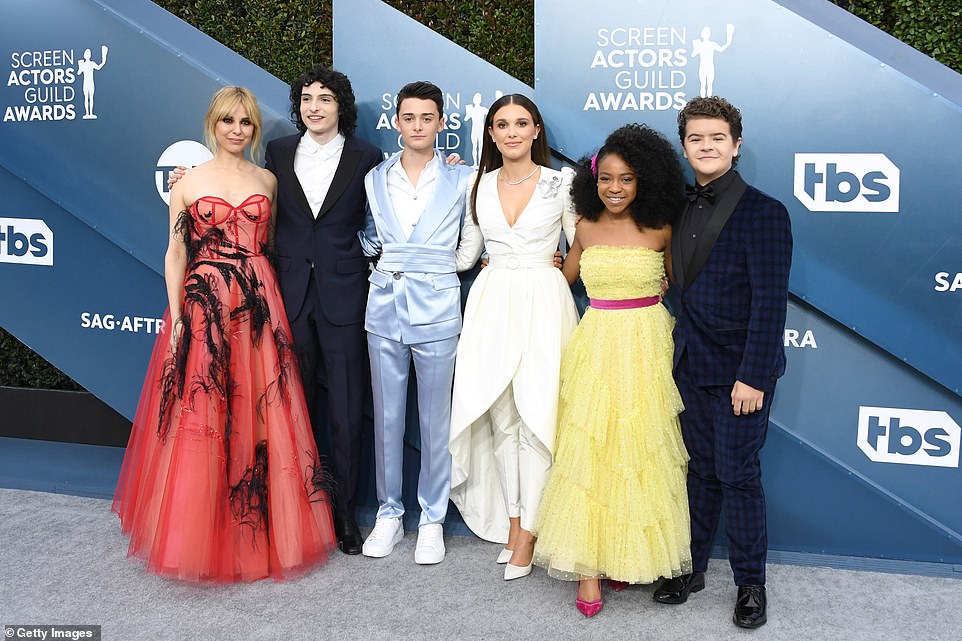 Handsome: Stranger Things’ Dacre, 25, chose a white suit with a black bow while his co-star Gaten Matarazzo donned an all black look and Finn Wolfhard chose a black suit with a white suit 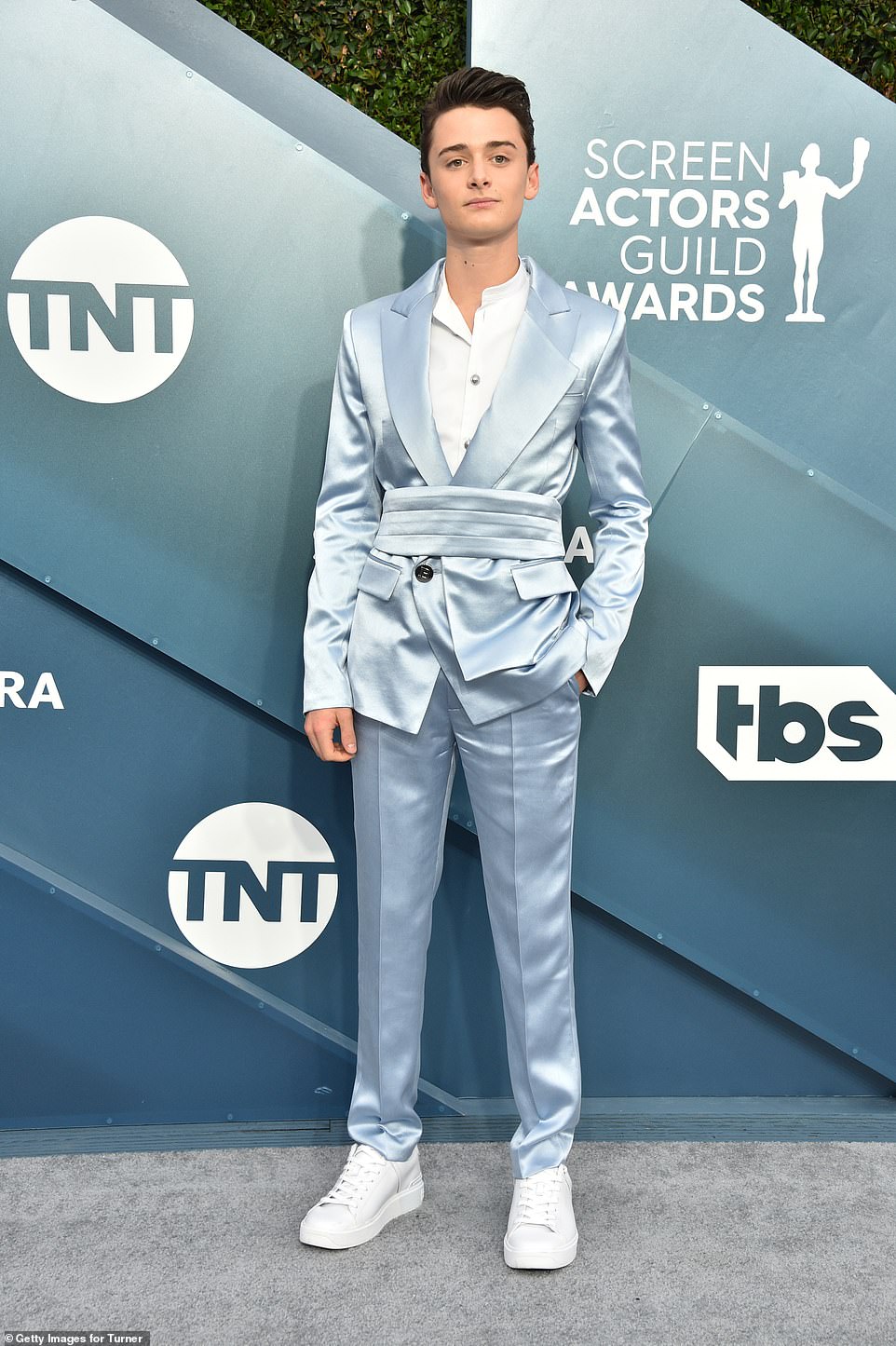 Outstanding Performance by a Male Actor in a Leading Role

Leonardo DiCaprio – Once Upon a Time in Hollywood

Outstanding Performance by a Female Actor in a Leading Role

Outstanding Performance by a Male Actor in a Supporting Role

Tom Hanks – A Beautiful Day in the Neighborhood

Brad Pitt – Once Upon a Time in Hollywood – WINNER

Outstanding Performance by a Female Actor in a Supporting Role

Outstanding Performance by a Cast in a Motion Picture

Once Upon a Time in Hollywood – Sony

Outstanding Action Performance by a Stunt Ensemble in a Motion Picture

Once Upon a Time in Hollywood

Jharrel Jerome – When They See Us

Outstanding Performance by a Male Actor in a Drama Series

Sterling K. Brown – This Is Us

Outstanding Performance by a Female Actor in a Drama Series

Outstanding Performance by a Male Actor in a Comedy Series

Outstanding Performance by a Female Actor in a Comedy Series

Christina Applegate – Dead to Me

Outstanding Performance by an Ensemble in a Drama Series

Outstanding Performance by an Ensemble in a Comedy Series