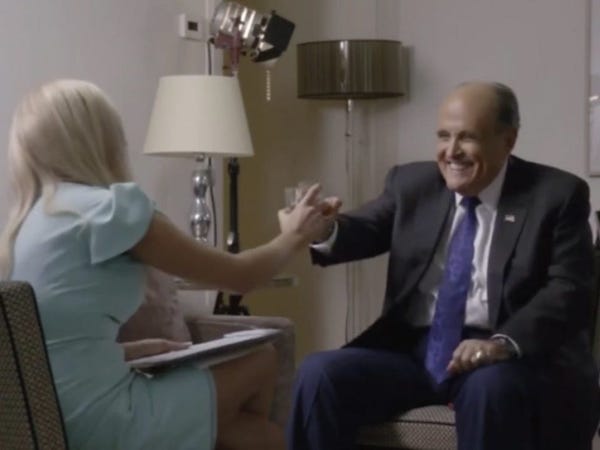 We now have Sacha Baron Cohen's take on the most talked-about scene in his new movie, "Borat Subsequent Moviefilm."

The movie ends with the actress who plays Borat's daughter in the movie, Maria Bakalova, looking to be in an inappropriate encounter with Rudy Giuliani, President Donald Trump's personal lawyer. It's topped by a moment when it looks like Giuliani has his hands in his pants.

Giuliani has since tweeted out that the scene is a "compete fabrication" and that he was "tucking in my shirt after taking off the recording equipment."

Cohen responded to Giuliani's tweet in an interview on "Good Morning America" on Friday.

"Well I would say that if the president's lawyer found what he did there appropriate behavior, then heaven knows what he's done with other female journalists in hotel rooms," he said. "I just urge everyone to watch the movie. It is what it is. He did what he did. Make your own mind up. It was pretty clear to us."

Bakalova, who was sitting next to Cohen during the "GMA" interview, turned to Cohen and said: "I thank you because I was sure you were going to save me from everything."

Cohen then divulged that a hiding spot was built in the suite where the Giuliani interview took place so the star could keep a close watch as he was "quite concerned" for Bakalova.

"We built a hideaway I was hiding in during the scene," he said. "I was monitoring it by text. It's my responsibility as a producer as well to assure the lead actor is looked after."