They’ve jetted away for a summer break in Ibiza with friends amid their busy schedule back home in London.

And Rochelle Humes looked on cloud nine as she enjoyed a day on a luxury yacht in the Mediterranean hotspot on Thursday with husband Marvin, soaking up the sunshine in a wild leopard print swimsuit.

The Saturdays star got stuck into some champagne before enjoying a paddle board session with her pals and packing on the PDA with her hunky husband.

This is the life: Rochelle and Marvin Humes had a day to remember on Thursday as they partied on a luxury yacht with their friends during a summer break in Ibiza

Rochelle and Marvin have spent the past few days in Ibiza for their pal, footballer Tom Cleverley’s 30th birthday party, celebrating with the sportsman and his ex TOWIE star wife Georgina at a surprise party on Tuesday night.

The fun continued for the group on Thursday as they chartered a luxury boat to set sail around the party island.

Rochelle made the most of the blazing temperatures in her skimpy orange one-piece, covered in an animal print and featuring a scooped neckline and high-cut on the legs to flaunt her gorgeous figure. 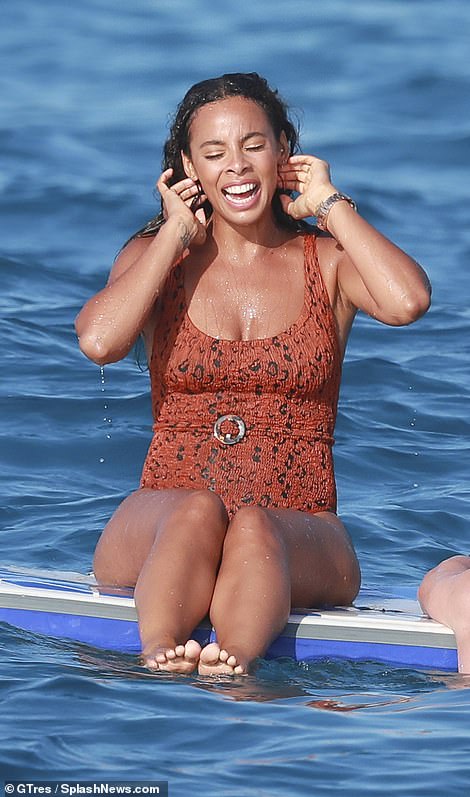 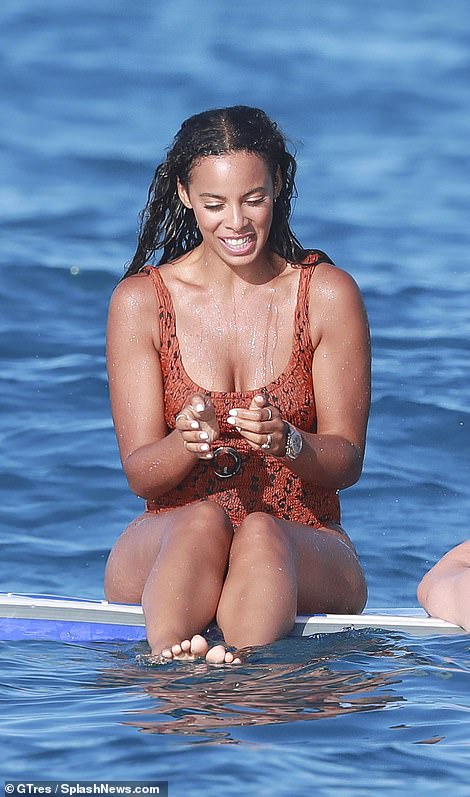 Looking fab! Rochelle made the most of the blazing temperatures in her skimpy orange one-piece as she took a dip

Wild: Rochelle looked amazing in her skimpy swimsuit, which showed off her derriere with its high cut style

Not to be outdone, the star’s husband stripped down to his swimshorts to show off her muscular physique.

The couple looked in a world of their own as they sipped champagne on the deck, gazing out at the view and cuddling up.

Later, Rochelle spent some time with her girlfriends, with the glam ladies doing their best to fit on some paddleboards, laughing as they toppled into the water. 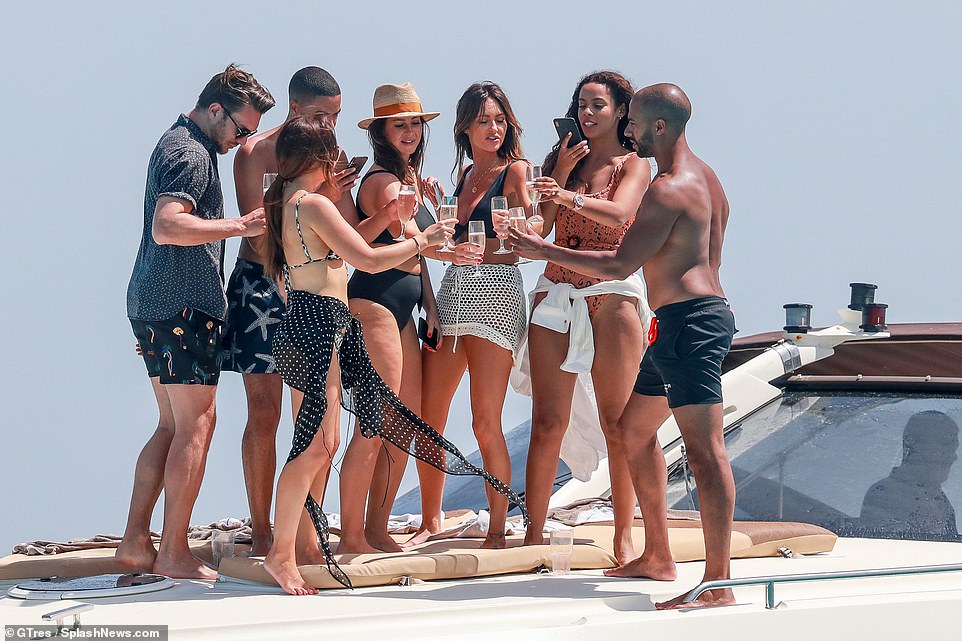 Cheers! Rochelle was keen to capture the day on her phone, snapping photos as the group toasted to their trip . The pals are in town to celebrate footballer Tom Cleverley’s 30th birthday with his wife Georgina (centre) a close friend of Rochelle’s 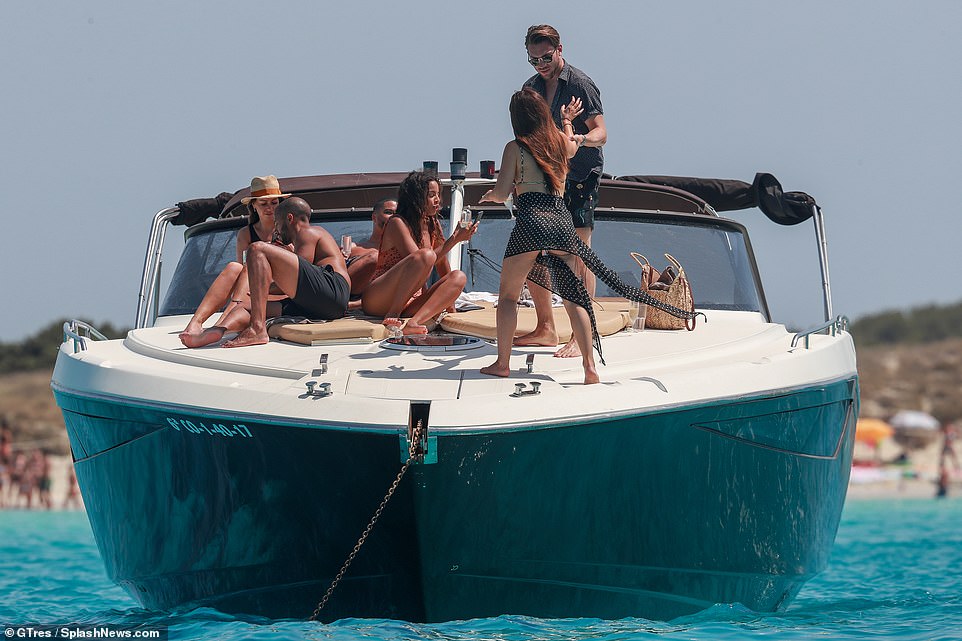 Boat life: Rochelle perched on the boat snapping photos while Marvin chatted to their friends behind her 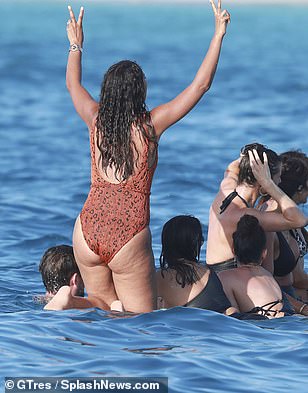 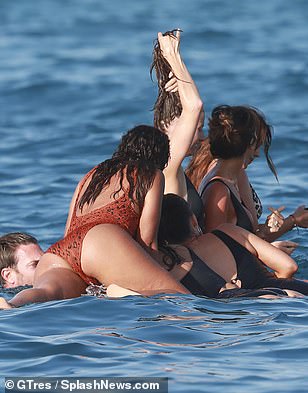 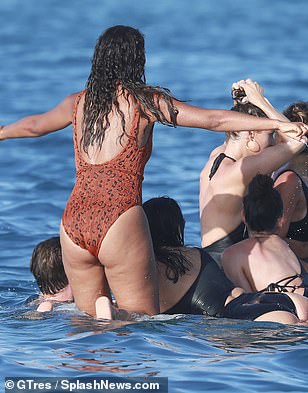 All at sea! Party-loving Rochelle led the charge as the girls tried to balance on surf boards at one point 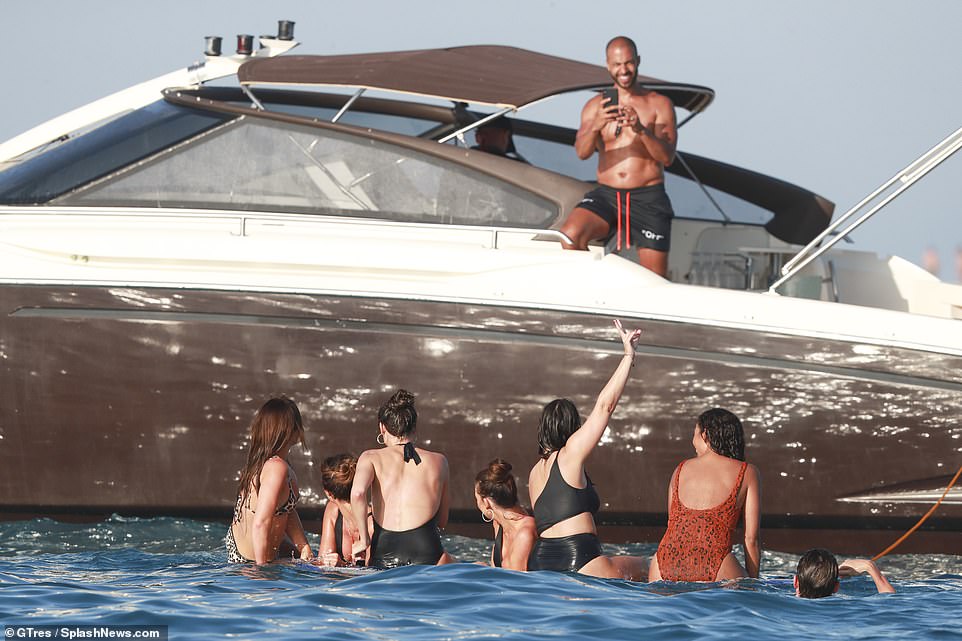 Insatgram husband: Marvin was on photo-taking duty as he snapped pics from the safety of the yacht

Rochelle was keen to capture the day on her phone, snapping photos as the group toasted to their trip with bubbly on the boat.

Rochelle’s close friend Georgina Cleveley went all out for her husband Tom’s 30th, throwing an epic surprise party for the Watford footballer in Ibiza on Tuesday night.

Georgina and Tom’s celebs pals shared Instagram videos of the moment Tom walked off an elevator to be greeted by a huge crowd of family and friends at a stunning rooftop bar.

Summer fun: Rochelle has had a fun-filled month with Marvin and their pals, with the group spending a few days in Mykonos two weeks ago 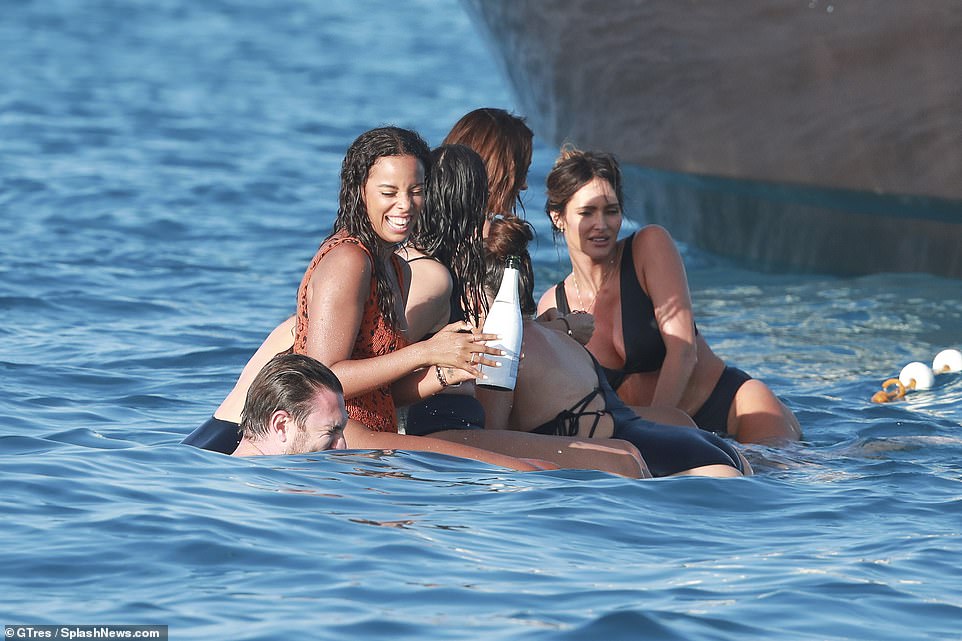 All the essentials: The laughing star clasped a bottle of drink as they paddled about in the waves 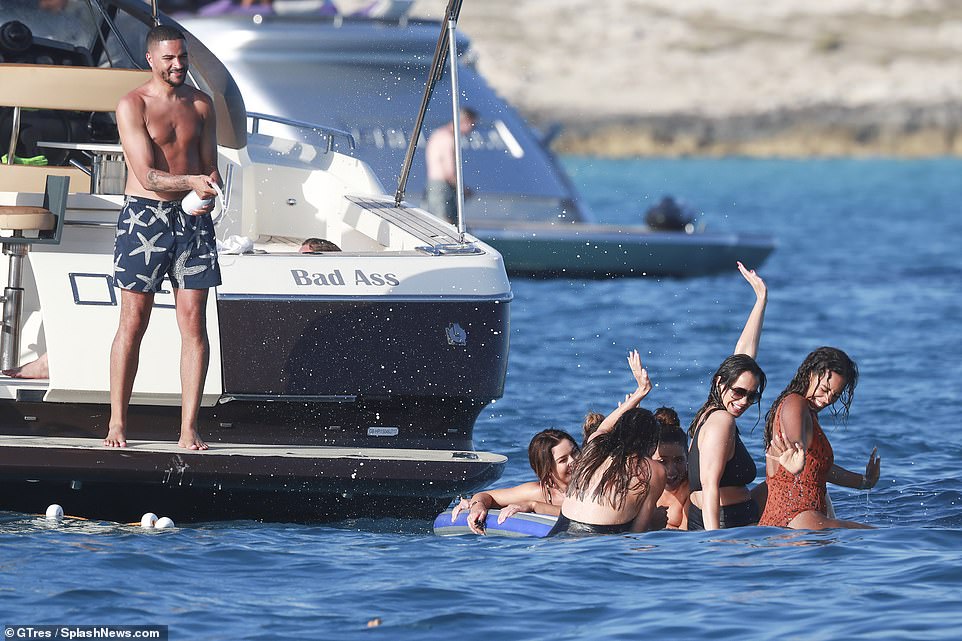 Champagne life: A pal was seen spraying champagne on the girls from the cheekily named boat 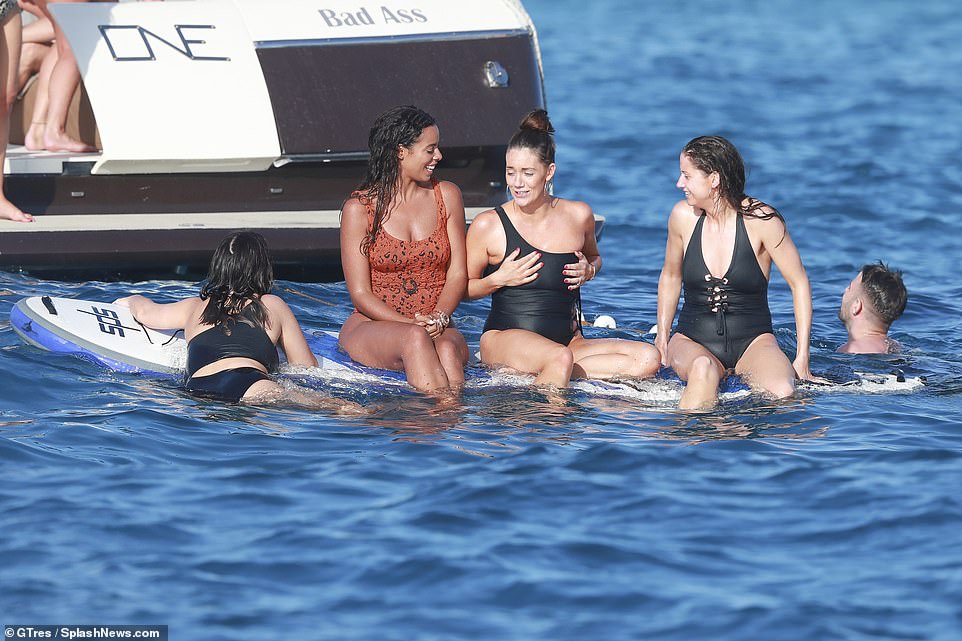 Sitting pretty: Rochelle giggled with her glam pals as they cooled down and worked on their tans 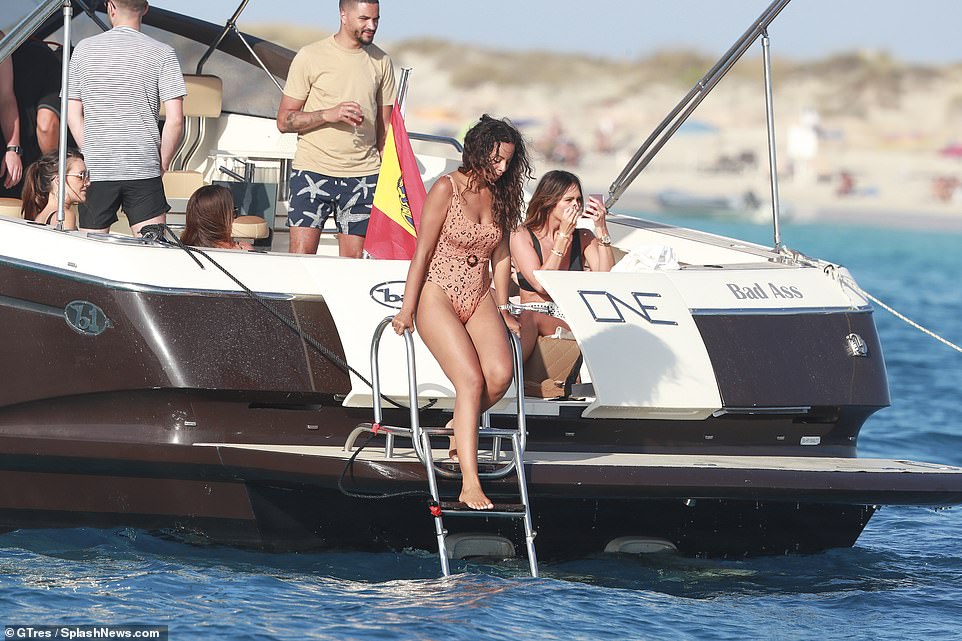 In she goes: The star carefully made her way down the steps and into the crystal clear Med waters

Marvin lent his DJ skills to the event, playing a selection of ’90s hits including Peter Andre’s Mysterious Girl to the delight of the crowd.

Proving they are such close friends, Rochelle and Marvin went on another holiday to Mykonos with Georgina and Tom earlier this month.

Marvin and Rochelle tied the knot at Blenheim Palace in Oxfordshire in July 2012 and have two daughters together, Alaia-Mai, six, and Valentina, two.

Hunk: Not to be outdone by his gorgeous wife, Marvin stripped down to his swimwear to show off his muscular physique 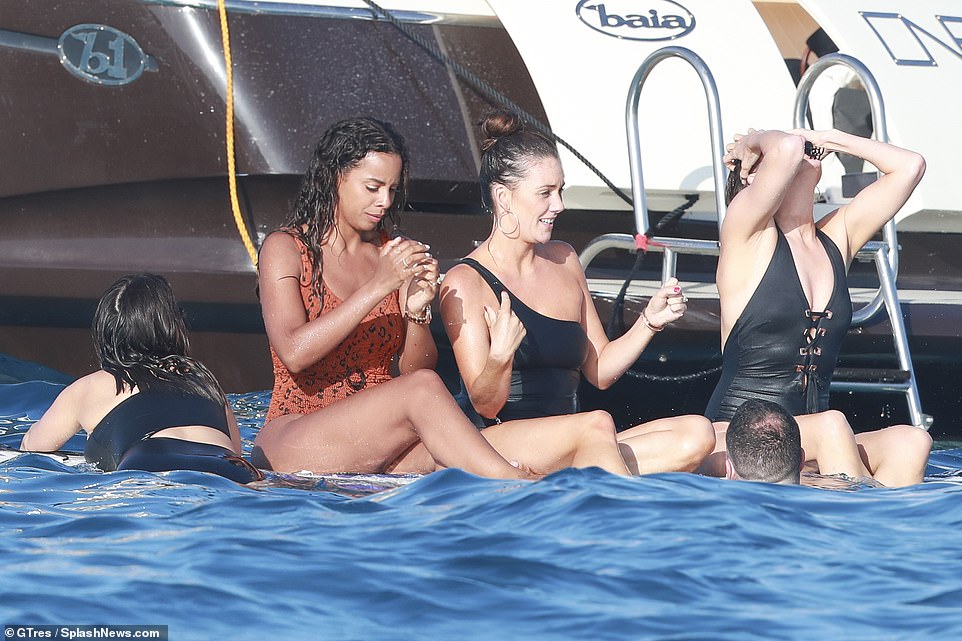 Girl talk: Rochelle was keen to spend some time with her friends as well as her hunky husband 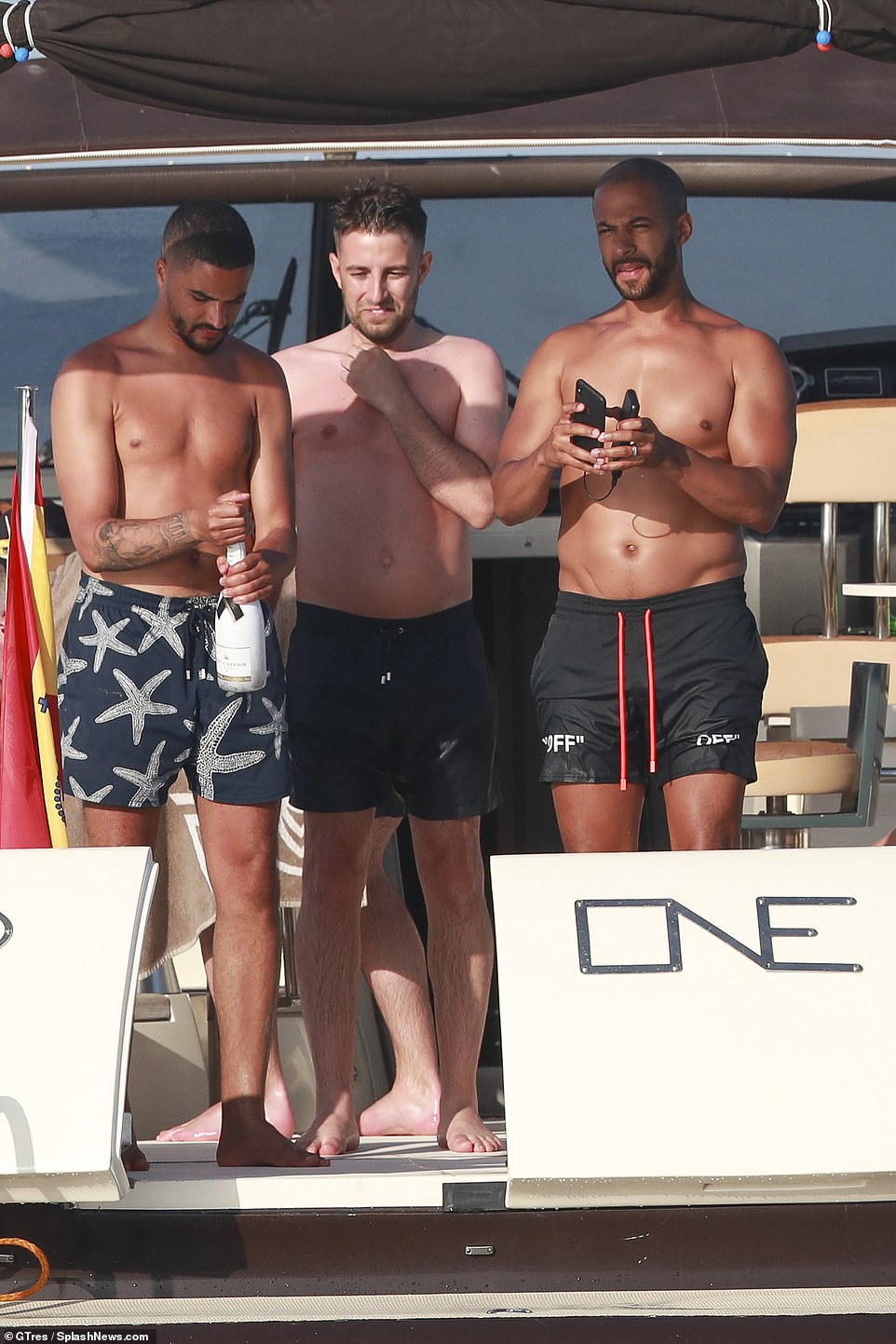 Lads lads lads: Marvin kept to the boat for the day, taking photos of his wife and hanging out with his buddies 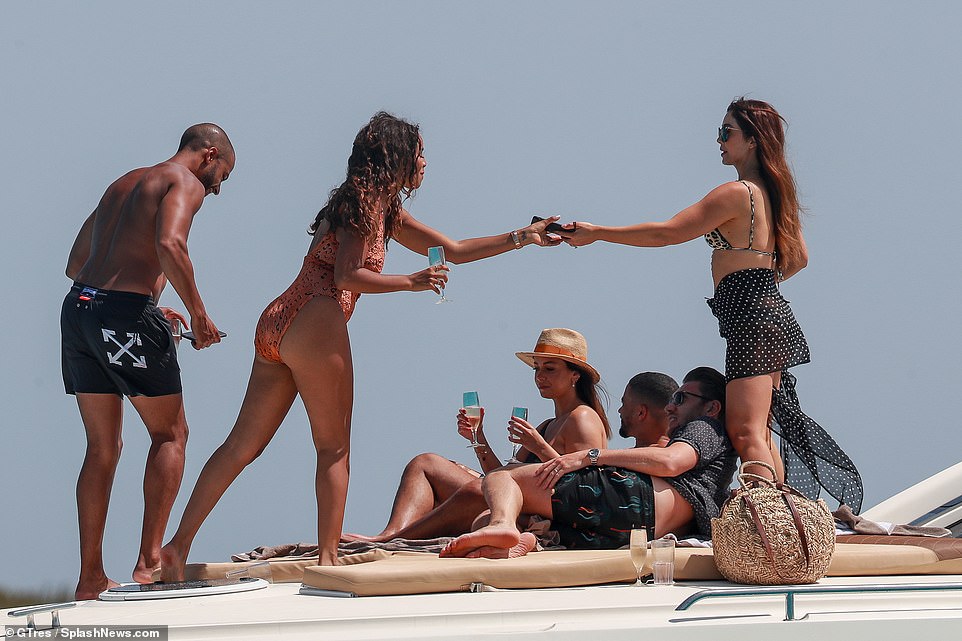 Celebrations: Rochelle and Marvin have spent the past few days in Ibiza for their pal, footballer Tom Cleverley’s 30th birthday party, celebrating with the sportsman and his ex TOWIE star wife Georgina at a surprise party on Tuesday night 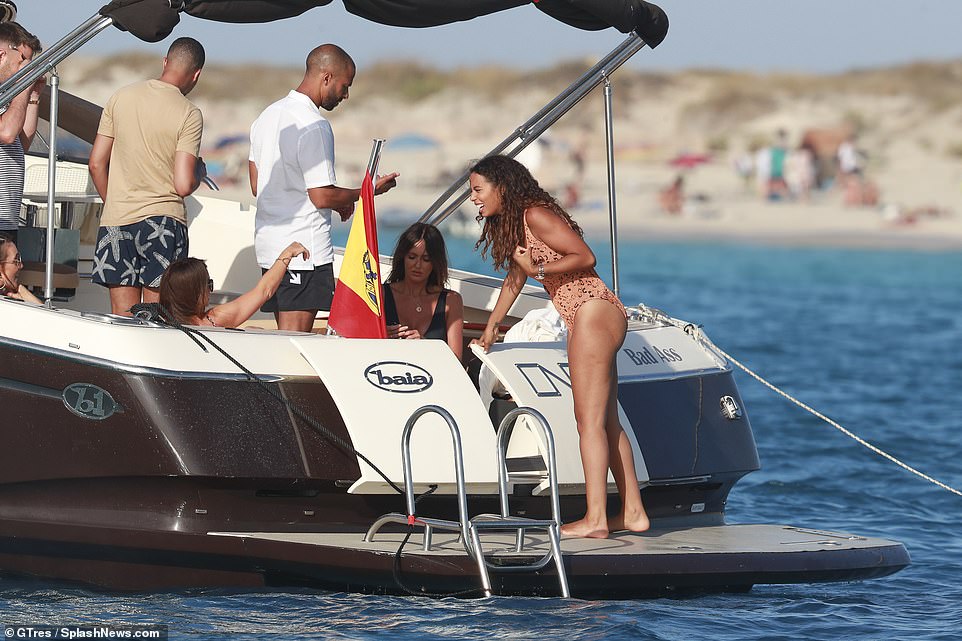 Party people: Marvin lent his DJ skills to the event, playing a selection of ’90s hits including Peter Andre’s Mysterious Girl to the delight of the crowd 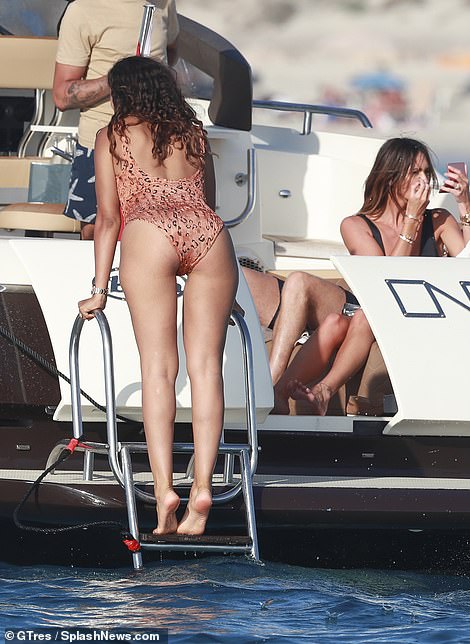 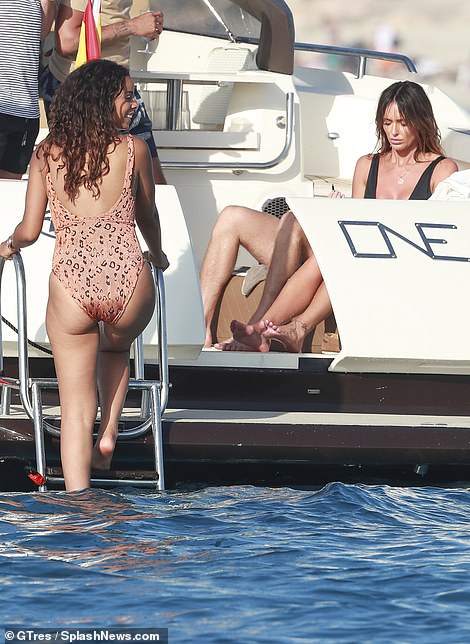 BFFs: Rochelle climbed on board as her close friend Georgina checked her makeup back on the boat

The couple recently discussed their plans for their upcoming 7th wedding anniversary on This Morning.

Revealing they will not be holding a huge celebration, the JLS star said: ‘I think after her 30th birthday party… I think the celebrations are going to be pushed back a bit.’

With Rochelle adding: ‘It wasn’t meant to be as big… he saw the bill and said: “This is meant to be a wedding package!”‘ 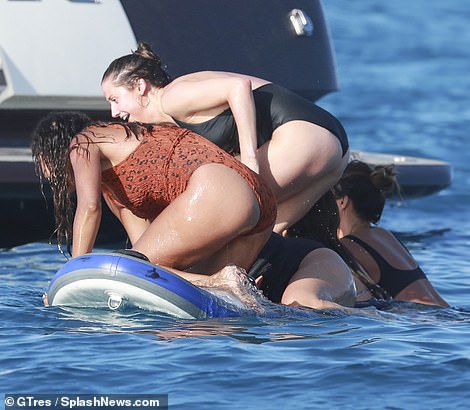 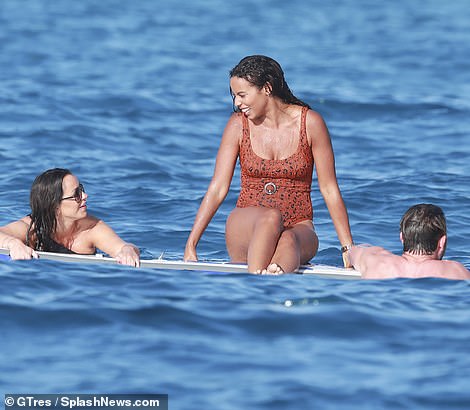 Easy does it! The girls had plenty of fun larking around on their boards before finally Rochelle managed to find her balance 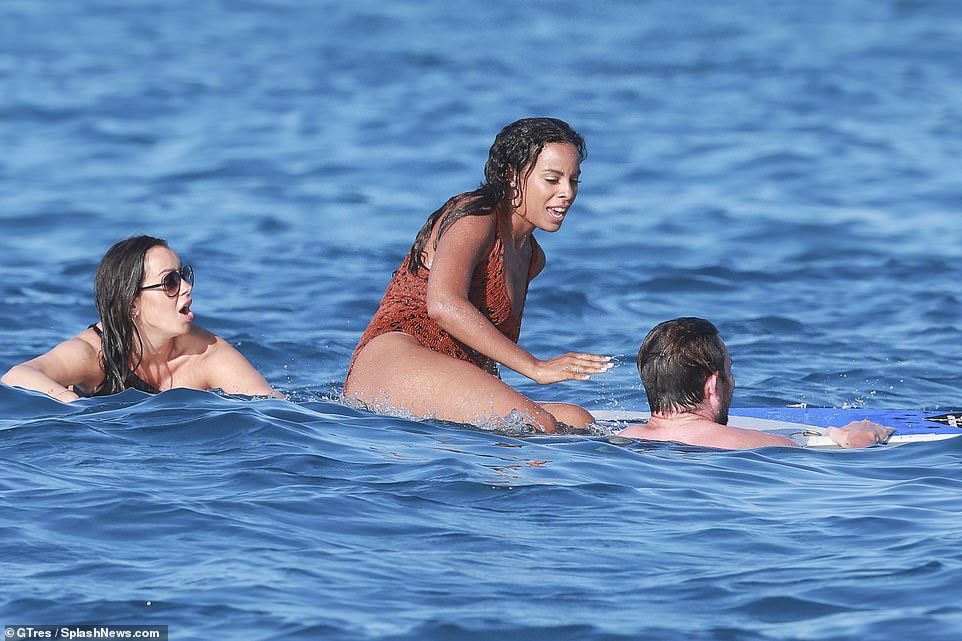 Steady! The star gave instructions to her male pal who was trying to help balance the board 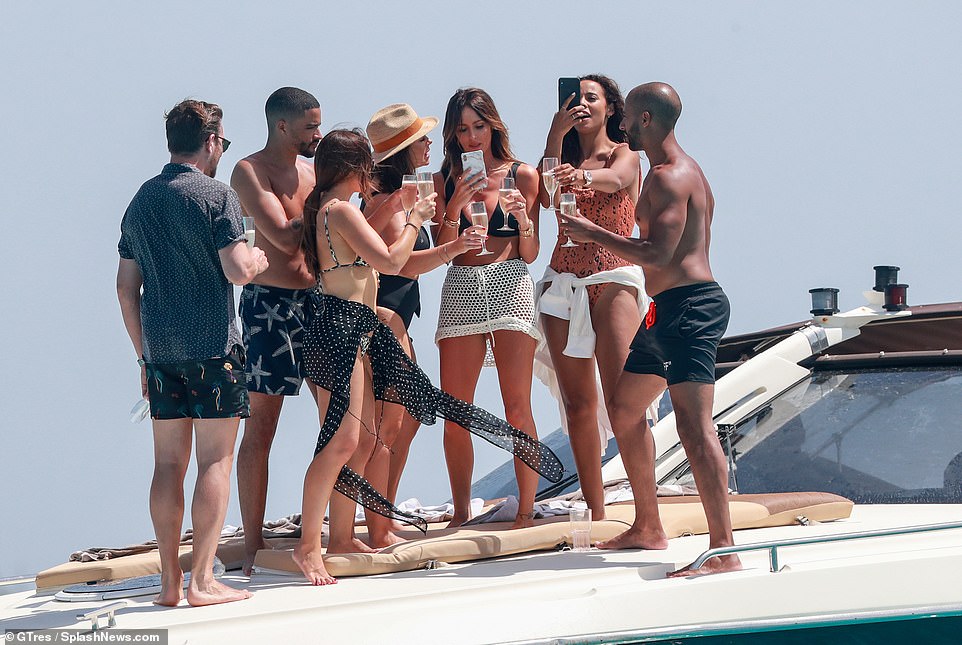 Back on board: Rochelle was in charge of snapping as the group of friends tucked into bubbly on their boat 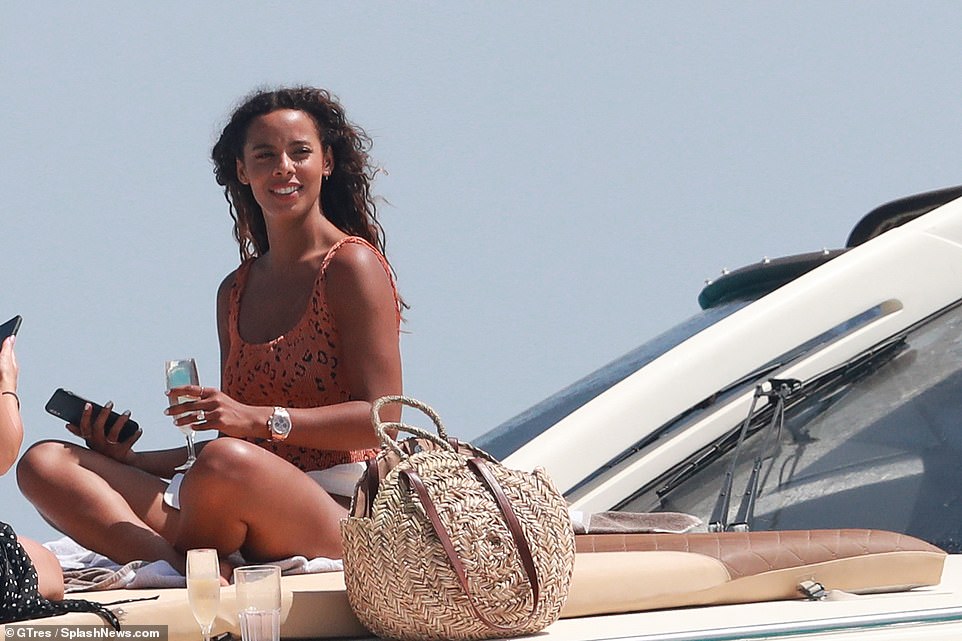 Taking it easy: The busy mother of two looked relaxed and happy during the raucous child-free day 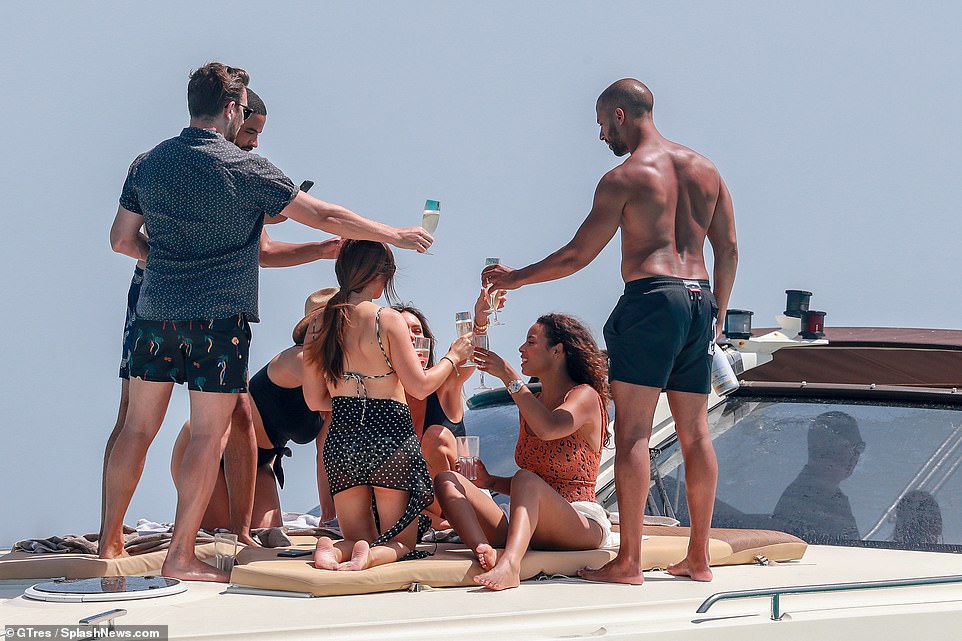 Cheers to us! The group toasted Tom’s birthday, which the footballer was celebrating early thanks to pre-season training keeping him busy in August, when he actually turns 30 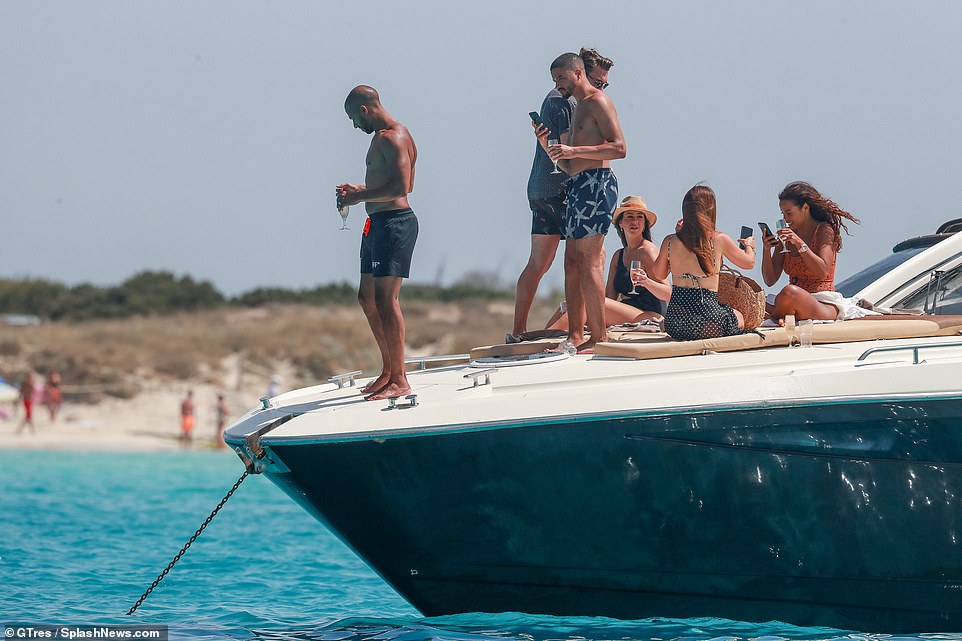 Stunning setting: The boat was moored just off the coast, allowing the group some time away from the crowded Ibiza beaches 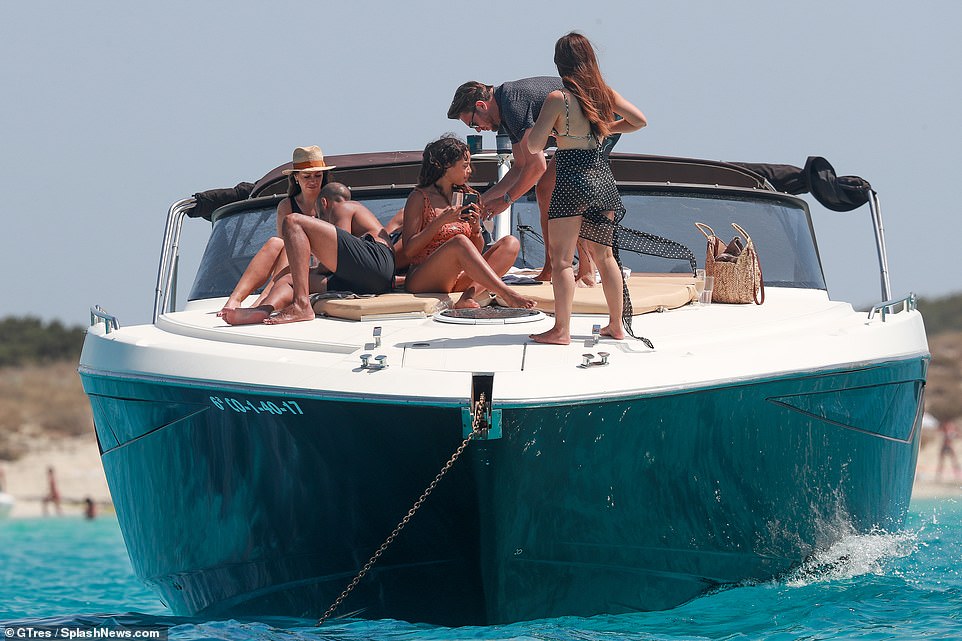 VIP treatment: The boat provided the perfect setting for the group’s continuing celebrations

While Marvin joked: ‘I sent Gary Barlow a grovelling letter. He was in rehearsals, it was the best time.’

Rochelle celebrated her 30th birthday with her closest friends at the exclusive Soho Farmhouse in Oxfordshire.

The glamorous celebrations ended with a performance from Gary Barlow – who even encouraged the birthday girl to sing alongside him. 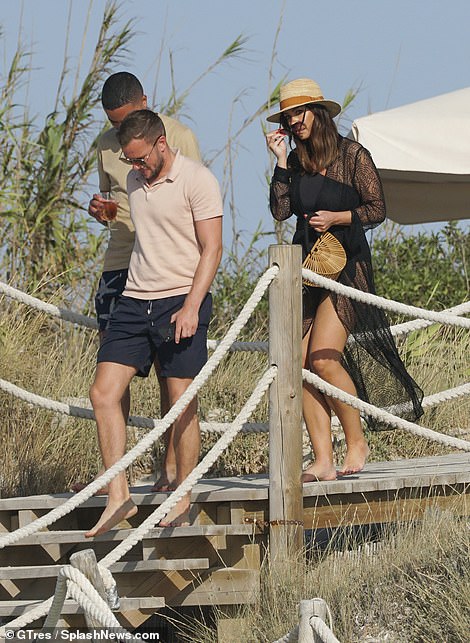 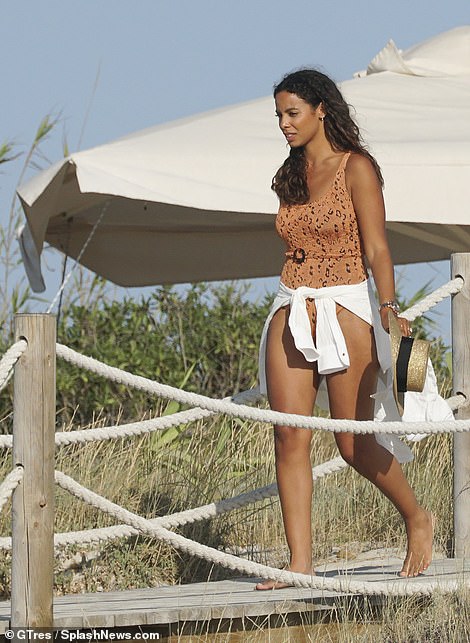 What a day! The couple and their friends looked a little tired as they disembarked the boat and headed back to dry land 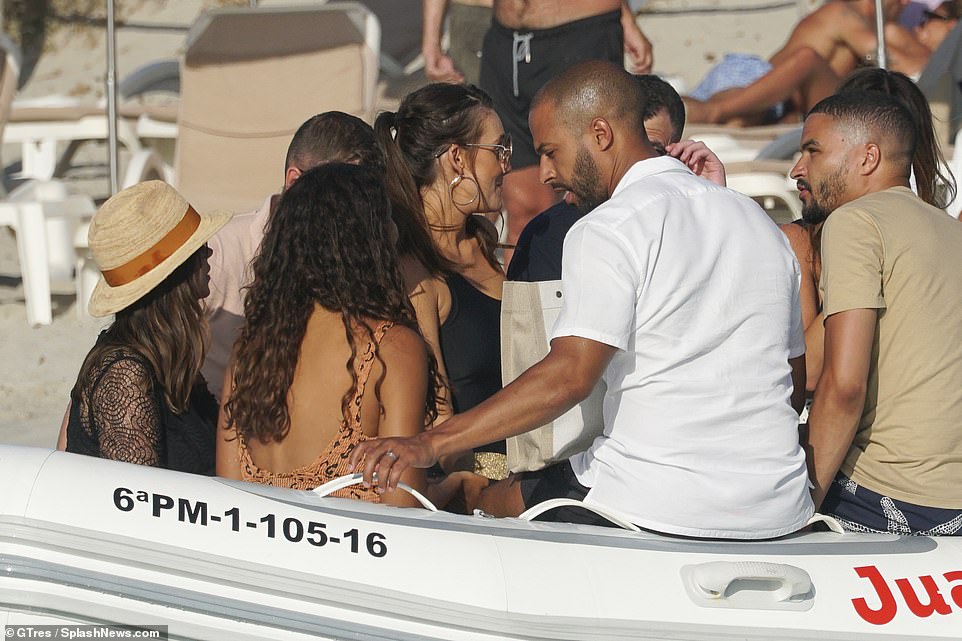 Next to you: Marvin and Rochelle had a cosy chat as the pals squeezed onto a dinghy for the ride back to shore