Pregnant Rochelle Humes has revealed she once tried to ‘scrub her skin off’ after receiving racist abuse when she was a child.

The This Morning presenter, 31, broke down in tears as she discussed the ordeal in a trailer for Channel 4’s new documentary about race The Talk that was released on Monday.

Sitting next to her husband Marvin Humes, 35, the singer cried as she said: ‘My legs were red, because I’d tried to scrub my skin off. 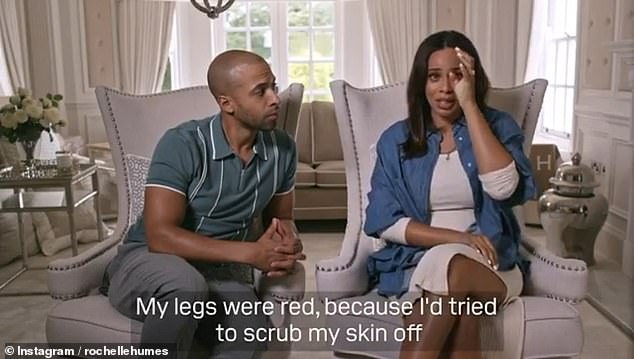 Honest: Pregnant Rochelle Humes has revealed she once tried to ‘scrub her skin off’ after receiving racist abuse when she was a child

‘I’m not upset for me, I’m just upset because I think my little girl is the same age. I just don’t know how I would handle that.’

Sharing the clip on Instagram the mother-of-two penned: ‘Opening up about racism and my challenges was overwhelming as it reminded me that we still live in a world where racism is normalised and accepted.

‘I don’t want my children growing up in a world where they think that their heritage and skin colour could be judged negatively. That’s why I was so emotional, not for me, but for every child or person who has been made to feel like they were not enough because of their skin colour.

‘So I allowed myself to open up and be vulnerable about this topic publicly to help support others through shared experience and also educate people on the lasting impact racism and discrimination can have on people.’ 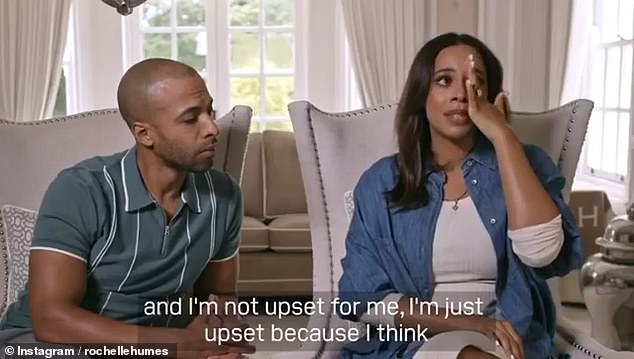 Candid: The This Morning presenter, 31, broke down in tears as she discussed the ordeal in a trailer for Channel 4’s new documentary about race The Talk that was released on Monday 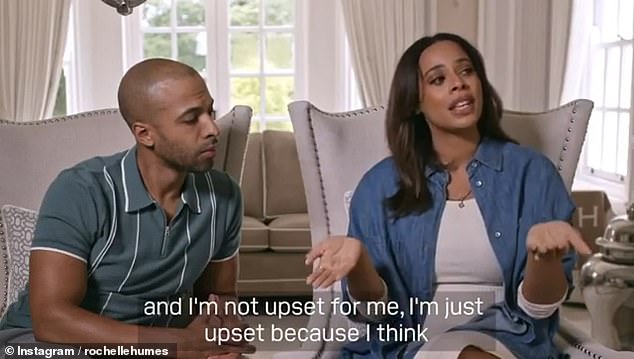 Upset: Sitting next to her husband Marvin Humes, 35, the singer cried as she said: ‘My legs were red, because I’d tried to scrub my skin off’

The former Saturdays singer shares daughters Alaia-Mai, seven, and Valentina, three, with husband Marvin, who listened attentively as she spoke in the clip.

Back in June Rochelle and Marvin spoke candidly to their followers about the importance of having conversations surrounding racism following the death of George Floyd in the US.

The couple shared the video to their respective Instagram pages in place of their ‘Stay Home With The Humes’ Friday night disco.

Rochelle stressed how important it is for their children to know they are ‘enough’ and how they want them to be ‘proud’ of their heritage. 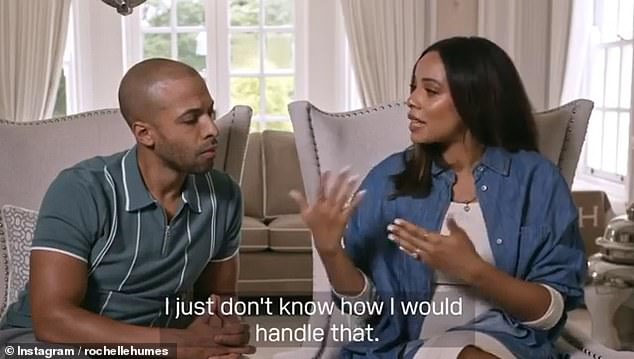 Emotional: Rochelle said she wouldn’t know how to handle it if her daughter ever tried to do something similar

Marvin began: ‘Hey guys how you doing? Normally we’d be getting ready for our Stay Home With The Humes House Party, but it just doesn’t feel right. It has been a massive few days around the world after the tragic killing of George Floyd.’

Rochelle continued: ‘We thought it can’t just be one day. It can’t be one week, one month. It needs to be a conversation that keeps happening. But I think it’s been far more positive than we could have hoped.’ 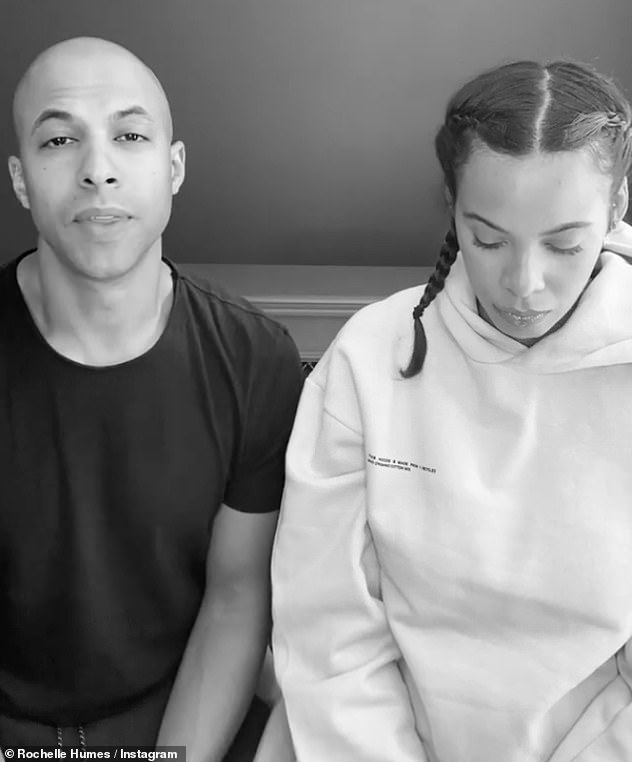 Important: Rochelle and Marvin Humes spoke candidly to their followers about the importance of having conversations surrounding racism in June after the death of George Floyd in the US

Marvin went on: ‘Definitely, we’ve seen so many people that follow us, people we follow, friends, family, work colleagues take time this week and understand the challenges other communities face at the hands of racism.’

Rochelle then said: ‘It’s been a beautiful thing. Previously these conversations might have made people feel uncomfortable. Maybe innocently not wanting to say the wrong thing. We’ve seen that with friends.’

Marvin continued: ‘I’m in a WhatsApp group with five other white guys, I’m the only black guy in the group and one of them opened up a conversation about race and he shared his experiences growing up and what he’s seen and we had a lengthy conversation on the group. And it was a conversation that would have never happened if we hadn’t had the events of the last week.’

The mum-of-two then said: ‘And sadly an innocent man died so we can have these conversations. It breaks my heart. ‘It’s the unthinkable. Sadly it’s not just one incident, it’s been going on for generations.’

Little Mix singer Leigh-Anne Pinnock, 28, will also star on the show alongside her parents.

In her interview, she said: ‘I got told, ‘You’re the black girl, you’ve got to work ten times harder’. 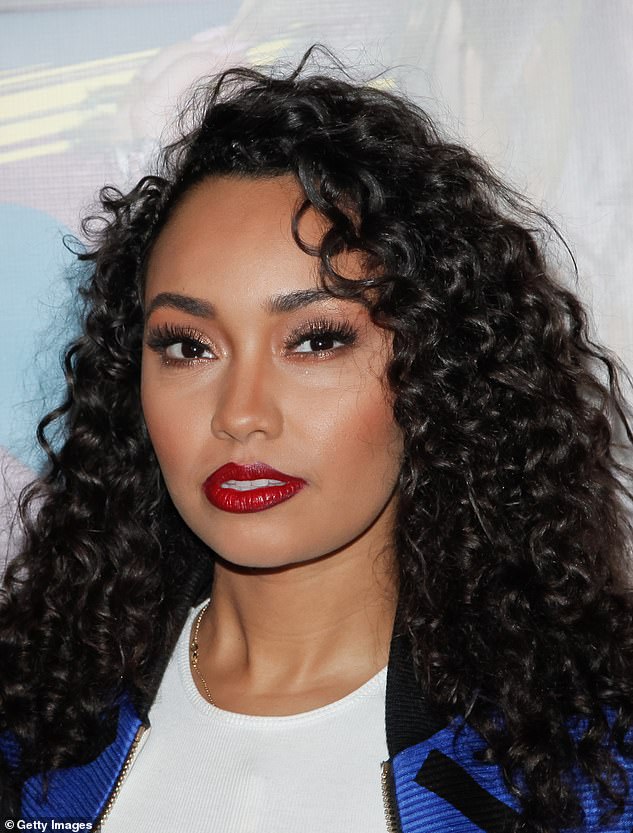 Open: Little Mix singer Leigh-Anne Pinnock, 28, will also star on the show alongside her parents to talk about racism in the UK

Last month Leigh-Anne shared an emotional video about her own experiences with racism.

She took to Instagram to share the heartbreaking message as she candidly spoke about her own experiences and anxiety battle.

Leigh-Anne, whose bandmates are Jesy Nelson, Perrie Edwards and Jade Thirlwall, tearfully admitted that she feels ‘invisible’ at times in the group.

The star also shared that she always feels like the ‘least favoured’ and has to work ‘ten times harder’ in Little Mix.

Leigh-Anne said during the five minute video: ‘My reality is feeling anxious before fan events and signings because I always feel like I’m the least favoured.

‘My reality is constantly feeling like I have to work ten times harder and longer to make my case in the group, because my talent alone isn’t enough. My reality is all the times I felt invisible within my group.

‘Part of me is fully aware that my experience would have been ever harder to deal with had I been dark-skinned. Our reality is no matter how far you think you’ve come, racism exists.

‘So let’s all continue to speak up on racism and keep this movement going. Thank you.’ 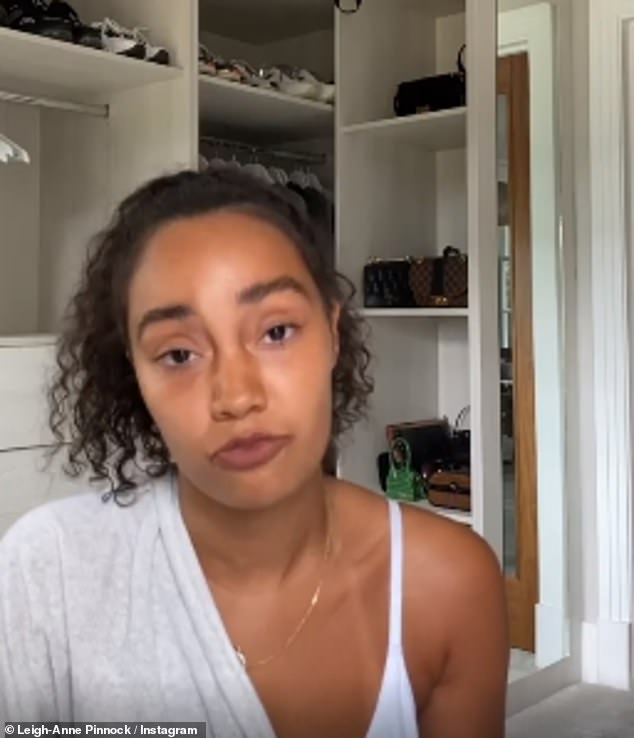 Emotional: Leigh-Anne shared that she always feels like the ‘least favoured’ and has to work ‘ten times harder’ in Little Mix last month