Rihanna and A$AP Rocky were a supportive duo as they were seen in Barbados to cheer on fellow musician, King Beenie Man, following his stage performance.

The mother of one stunned in a fitted, red hot minidress while her boyfriend – whose real name is Rakim Athelaston Mayers – opted for a colorful ensemble as they were greeted by the Beenie Man backstage in Rihanna’s hometown.

The Jamaican DJ uploaded a photo series and a short clip on Instagram earlier Saturday of himself crossing paths with the Lift Me Up singer and talented rapper, both 34. 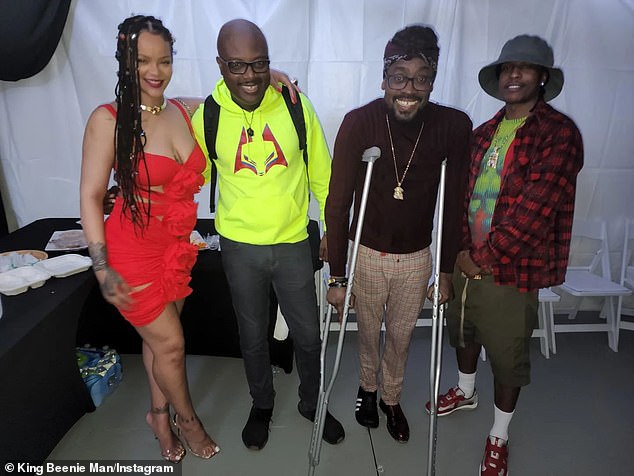 Fun night: Rihanna and A$AP Rocky were a supportive duo as they were seen in Barbados to cheer on fellow musician, King Beenie Man, following his stage performance

The Diamonds hitmaker turned heads in a figure-hugging, vibrant red dress with cutouts on the sides and floral embellishments on the front.

The Grammy award-winner slipped into a pair of open-toed, strappy heels to complete her overall ensemble for the exciting evening.

Rihanna accessorized her look with a gold-colored, beaded choker necklace for an, eye-catching touch to her look.

The star and A$AP were all smiles as they posed for a few quick snaps with Beenie Man and DJ Kurt Riley backstage. 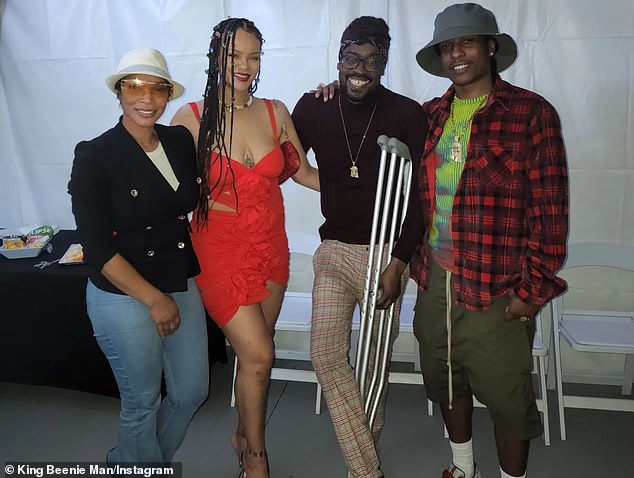 Stunning: The Lift Me Up hitmaker was radiant in a form-fitting, red dress as she posed for a few backstage photos with fellow musicians and her boyfriend 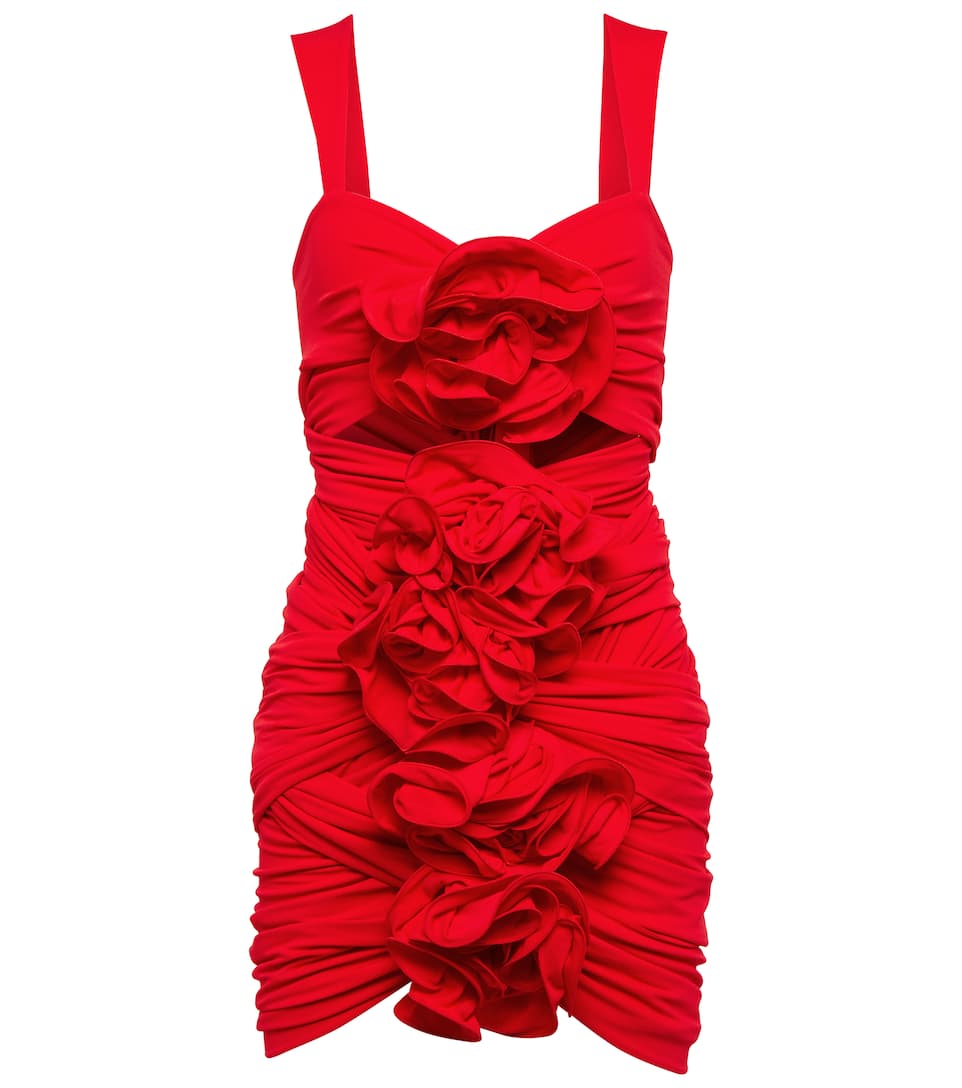 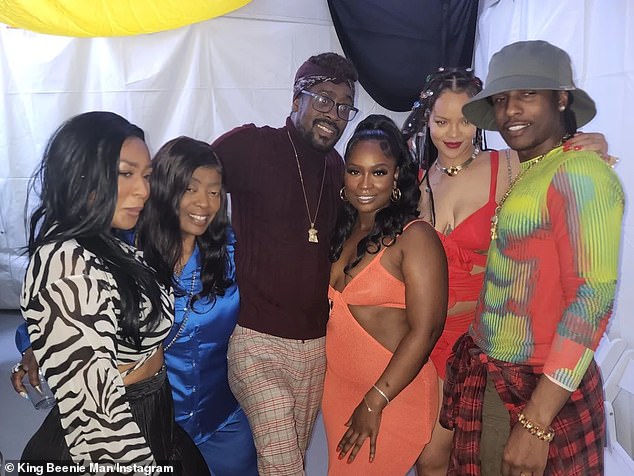 Making memories: The two stars were also seen posing with other close pals after the performance

The Barbadian-born performer was seen with her long locks falling down past her shoulders.

Her makeup was classically done, and comprised of a simple layer of black mascara to make her eyes pop along with a reddish-colored lipstick to coincide with her dress.

The Good For You rapper also opted for style for the night’s festivities, and wore a long-sleeved, colorful shirt with hues of green, yellow, blue, and red.

He also donned a pair of forest green shorts while throwing on a red and black flannel shirt. Later in the night, he wrapped the flannel securely around his waist.

The couple happily posed for various group photos throughout the night, while in a short reel, Rihanna could be seen walking up to Beenie Man to give him a welcoming hug. 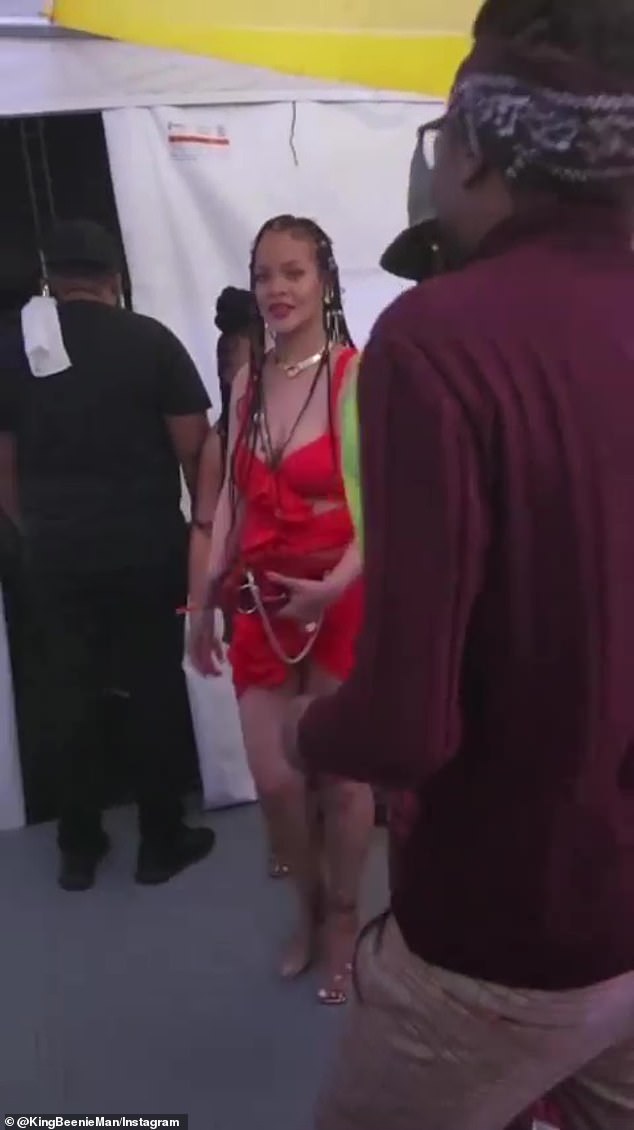 Cheerful smiles: The award-winning performer was additionally seen in a clip uploaded by the Jamaican DJ as she swooped in for a hug with the musical artist 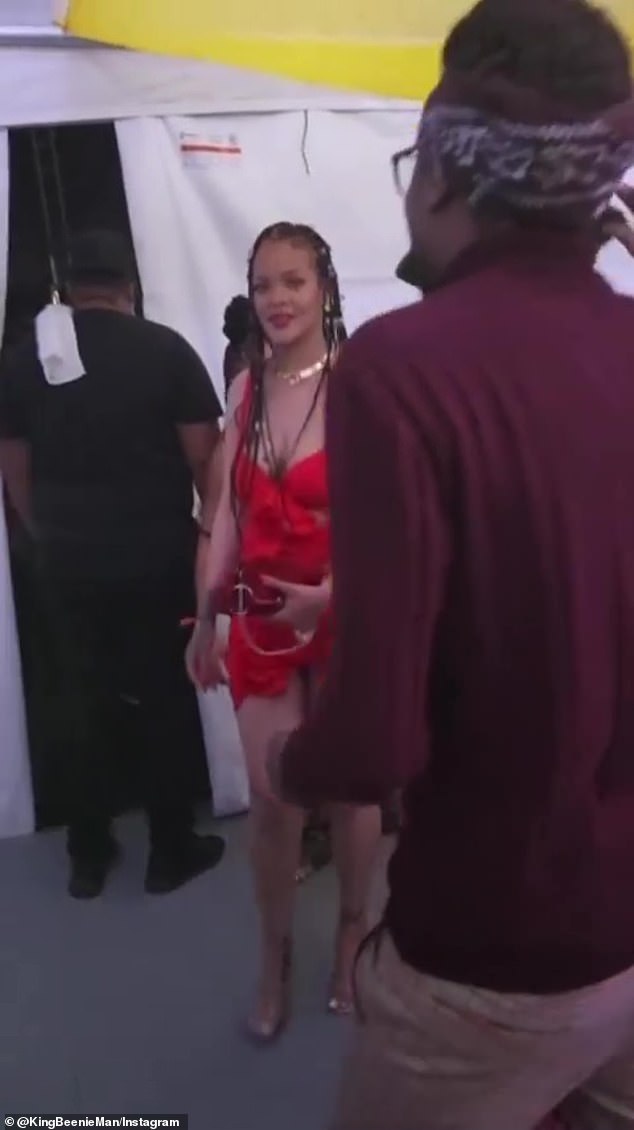 Great night: The mother of one cheered on Beenie Man and stated that his performance on stage was ‘amazing’ 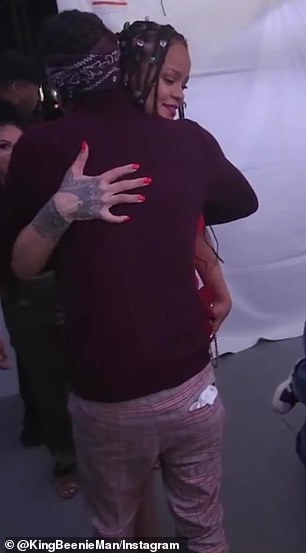 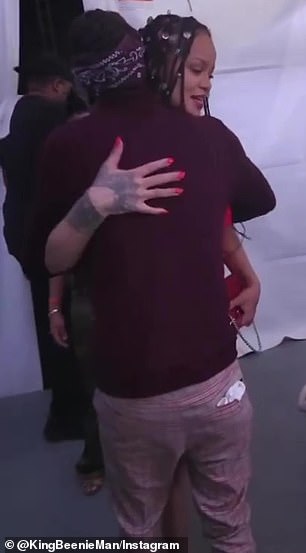 Reunited! In the clip, Rihanna could be heard saying to the Jamaican DJ, ‘Long time right?’ as the two stepped in for a quick embrace 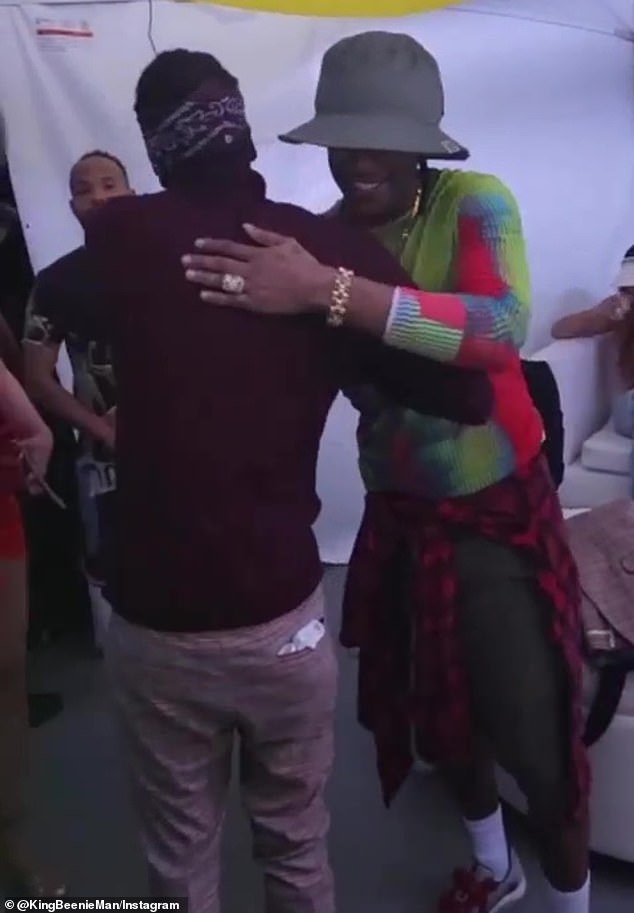 Talented: A$AP Rocky was also seen in the frame as he happily joined in a side embrace with Beenie Man

‘Riri!’ the DJ called out as Rihanna came into view. She quickly walked over and responded with, ‘What up? Long time right?’ as the two stars reunited.

As she stepped back following a brief hug, she cheered him on and gushed that his performance was ‘amazing.’ Beenie Man had injured his ankle in a recent bike crash, and in the photos, the performer could be seen resting on crutches.

A$AP Rocky was also seen in the frame as he happily joined in a side embrace with Beenie Man. The couple appeared to be more than thrilled during their stop in Barbados, which is notably Rihanna’s hometown.

The two recently welcomed their first child to the world earlier this year in May, and a source close to the stars recently informed Us Weekly that they are definitely, ‘open to more kids.’ 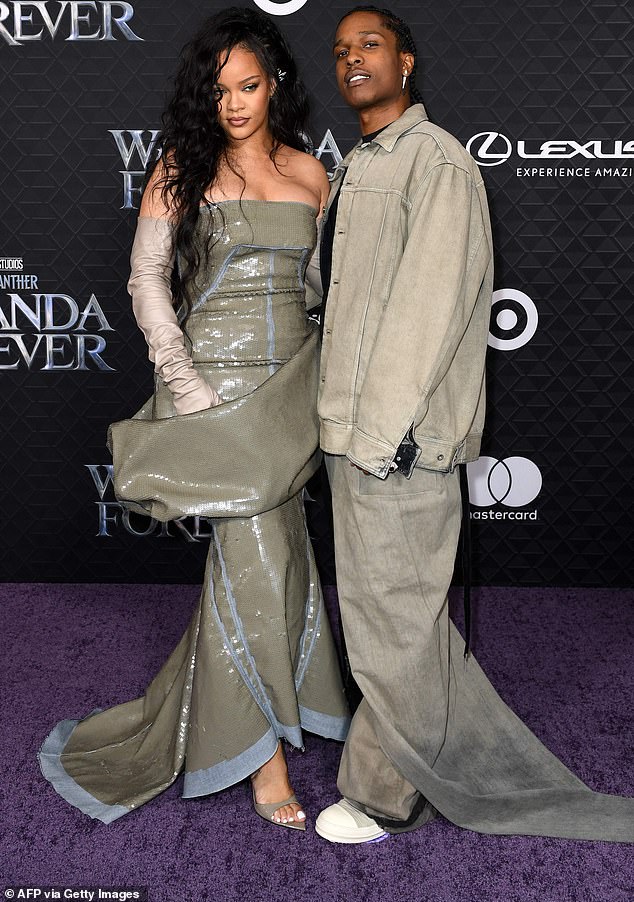 ‘Open to more kids’: Rihanna and A$AP are reportedly open to continue growing their family, after welcoming their first child in May; Pictured October 2022

The insider continued to state that the two performers, ‘love being parents,’ and that, ‘Having this family together has brought them so much closer, they are more loved up now than ever.’

Another source expressed that the two are doting parents and, ‘rarely leave their baby’s side. They’re being very private about their newborn out of concern for his safety and really just want to keep him away from the public eye for the time being.’

Along with focusing on her beloved family, Rihanna has excitedly been jumping back into her award-winning career. She recently showcased her Savage X Fenty Vol. 4 show earlier this month and released her latest single, Lift Me Up, for the Black Panther: Wakanda Forever soundtrack.

According to The Sun, the beauty will also appear in an upcoming Apple TV+ documentary that will showcase her return to the stage for her Super Bowl Halftime performance in February 2023.

‘She will be recorded during rehearsals and meetings in the lead-up to the big night and give an insight into what her life is really like now she is returning to pop as a mom,’ a source informed the publication of the multi-million dollar deal.

‘She is keen for the world to remember why she is one of the greatest performers of all time,’ the insider added. 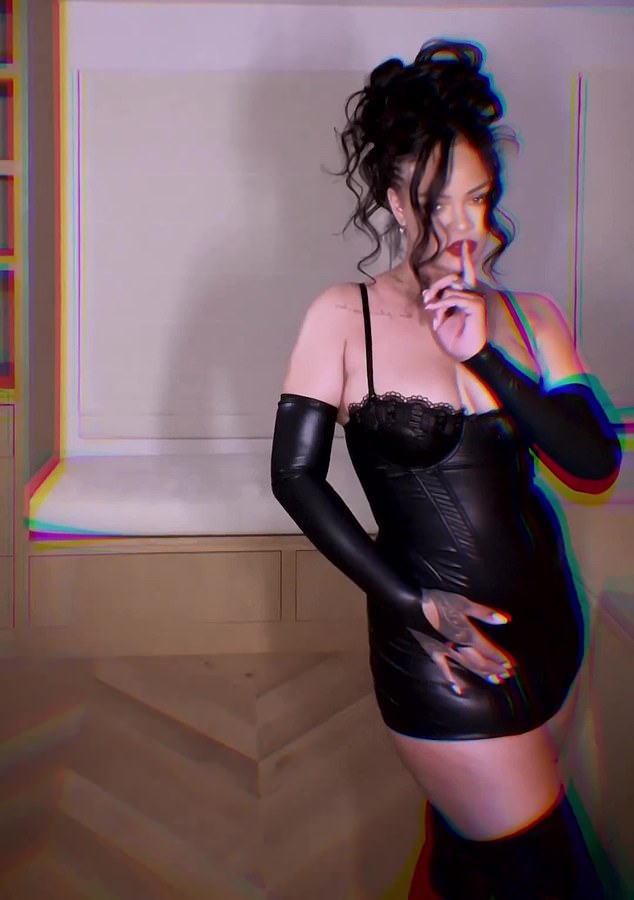 She’s back! The beauty will reportedly appear in an upcoming Apple TV+ documentary that will showcase her return to the stage for her Super Bowl Halftime performance in February 2023