She’s no stranger to showcasing her enviable figure in racy ensembles on her widely-followed social media account.

And Rhian Sugden set pulses racing as she slipped her curves into pretty nude lingerie from Scantilly by Curvy Kate for a sizzling snap, which she shared to Instagram on Sunday.

The glamour model, 33, looked incredible in the underwear set, which boasted a cross-your-heart styling in a plunging neckline and delicate floral embroidery on the fishnet cups. 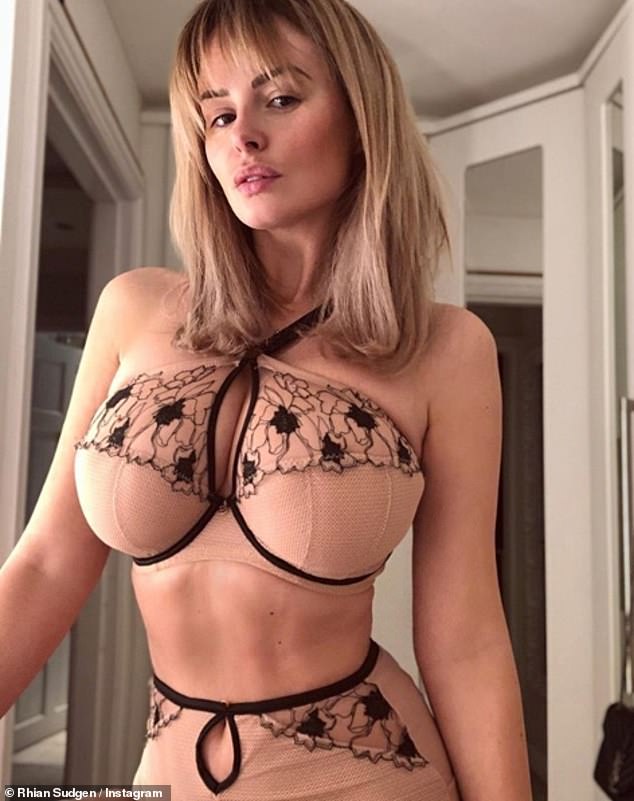 Wow! Rhian Sugden, 33, set pulses racing as she slipped her curves into pretty nude lingerie from Scantilly by Curvy Kate for a sizzling snap, which she shared to Instagram on Sunday

Rhian captioned the jaw-dropping shot: ‘@scantilly holding me in nicely! (Just). This set is heart throb. Perfect for Valentines.’

The star turned up the heat once again as she shared a sizzling lingerie snap onto Instagram last Monday evening.

Rhian looked sensational as she posed in mesh black underwear by Björn Borg, just moments after she uploaded a candid image of herself eating chocolate biscuits in bed.

In the radiant photo, the media personality was the picture of confidence as she flaunted her toned physique in the barely-there two-piece following a yoga session. 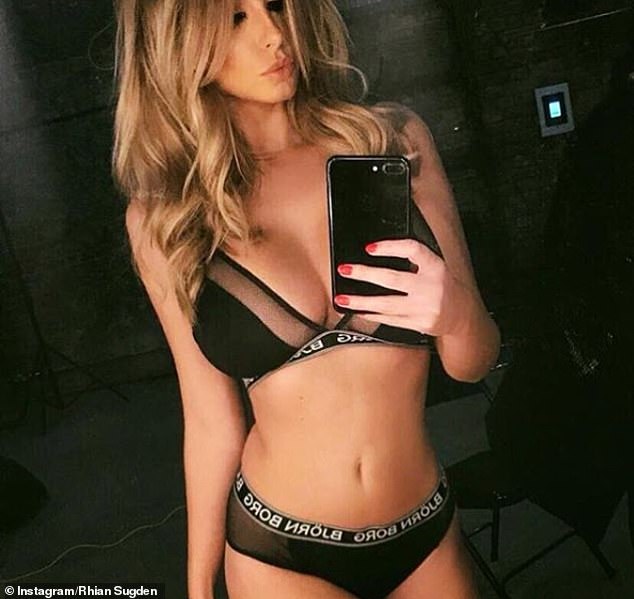 With her locks styled worn in glamorous waves, Rhian complemented her beauty with a dewy make-up look.

The CBB star captioned her post: ‘Yoga… I suppose I better put some clothes on…’ [sic]

Over the weekend, Rhian indulged in some yummy treats as she ate a chocolate Digestive biscuit in bed. 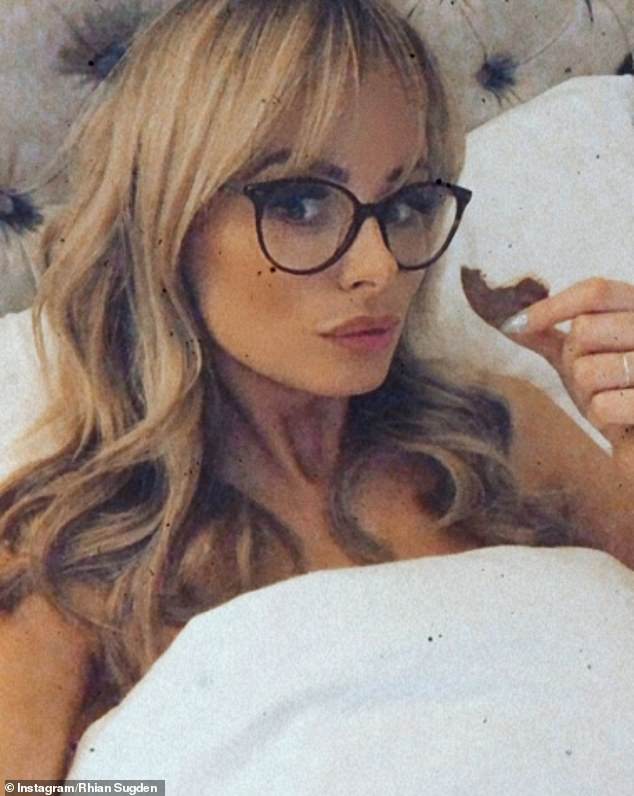 Stark contrast: The glamour model, 33, posed in mesh black underwear by Björn Borg, just moments after she uploaded an image of herself eating chocolate biscuits in bed

She wrote alongside the snap: ‘Biscuits in bed. Living the Saturday night dream. #JOMO (joy of missing out).’ [sic]

Meanwhile, Rhian recently revealed she’s been attacked by vile social media trolls after starting her second round of IVF.

In an emotional Instagram video, the model broke down in tears as she said they had claimed she ‘didn’t deserve’ to have a child, and her fertility struggles were ‘karma’ for various woes in her past.

While she was not specific, the star appeared to be alluding to her ‘sexting’ scandal with married TV presenter Vernon Kay in 2010.

In April, Rhian candidly shared she was planning to have IVF as part of her bid to start a family with husband Oliver Mellor, after being told she has the egg count of ‘a woman over 45.’

She said: ‘I’ve come forward to talk about my IVF struggles and I’ve also started a blog to talk about it and I’ve actually helped quite a lot of women. But some of the comments underneath the article are absolutely disgusting. 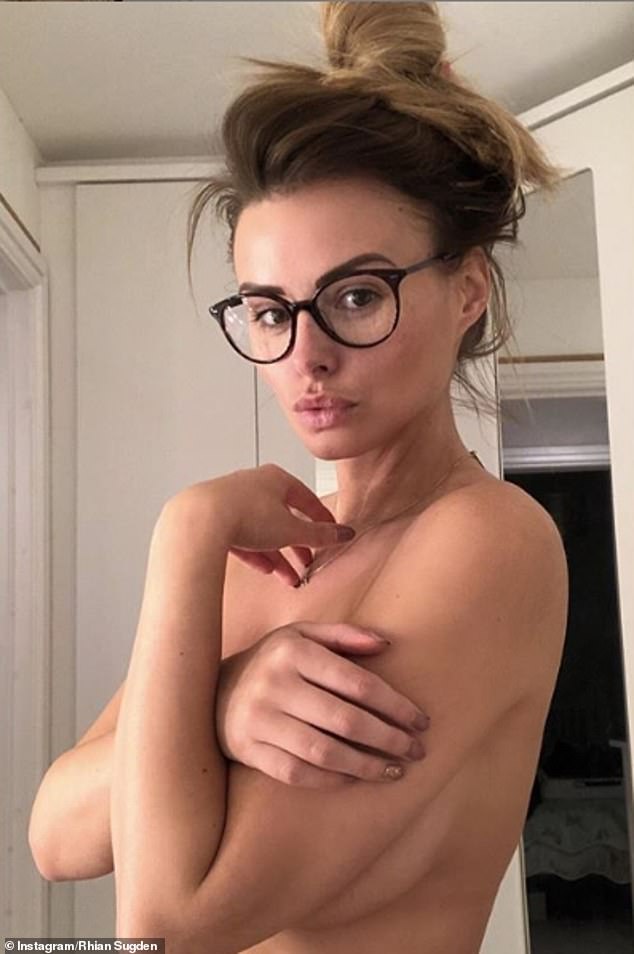 Dare to be bold: The bombshell is no stranger to showcasing her enviable figure in racy ensembles on her widely-followed social media account (pictured last year)

‘People are saying I don’t deserve to have babies, because I was a Page 3 model and saying my kids are gonna get bullied saying it’s karma from things that have happened for why I can’t have kids…

‘Saying I don’t deserve any NHS funding because I should have started when I was younger. And I just… it’s a really sensitive subject and I appreciate the people get trolled all the time online, me included.

‘And I’m happy get trolled over how I look or things I might say but this is a whole new level of cruelty it really affects me.’ 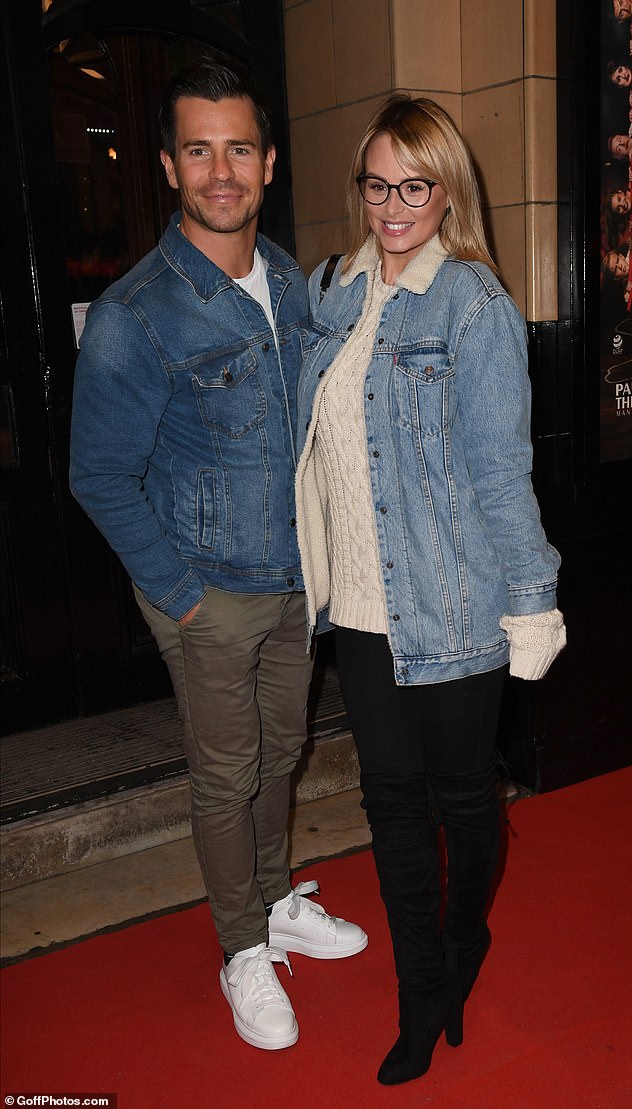 Family planning struggles: The blonde recently revealed she was planning to have IVF to start a family with husband Oliver Mellor (pictured in October)