Real Housewives of New York’s Ramona Singer is ‘concerned’ Eboni K. Williams will make her look like a ‘racist’ and ‘bigot’ at show reunion

Real Housewives of New York’s Ramona Singer is reportedly ‘concerned’ that castmate Eboni K. Williams is set to make her look like a ‘racist’ at the upcoming Bravo reunion.

The 64-year-old reality TV vet has reportedly attempted to ‘negotiate terms’ with producers to avoid any racial conversations at the September taping, out of fear she will be painted as a ‘bigot’ by Williams, 37, per TMZ.

Throughout the course of the season, Ramona and Williams – the show’s first Black castmate, have been at odds.

Ramona reportedly has been chirping in producers’ ears ahead of taping, out of fear that Eboni may attack her publicly and ‘frame her as a bigot.’ 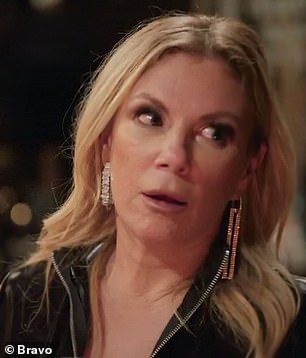 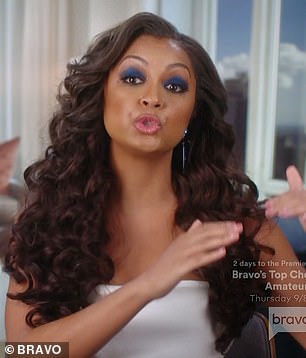 According to the outlet, producers shut down Ramona’s demands that race be off limits throughout the course of the  sit down — which she has come to ‘accept,’ — but she wanted ‘producers to know how she feels.’

An insider said that amid the trepidation, the Palm Beach frequenter has no plans to dodge the reunion all together, but is not approaching the situation lightly.

DailyMail.com was the first to report news that the reunion filming was pushed back from August to at least September, following news of low-ratings this season.

The cast – which currently features Luann de Lesseps, Singer, Sonja Morgan, Leah  McSweeney and Williams – was also informally advised that taping of a next season will not occur until early in 2022 rather than late 2021 as planned. 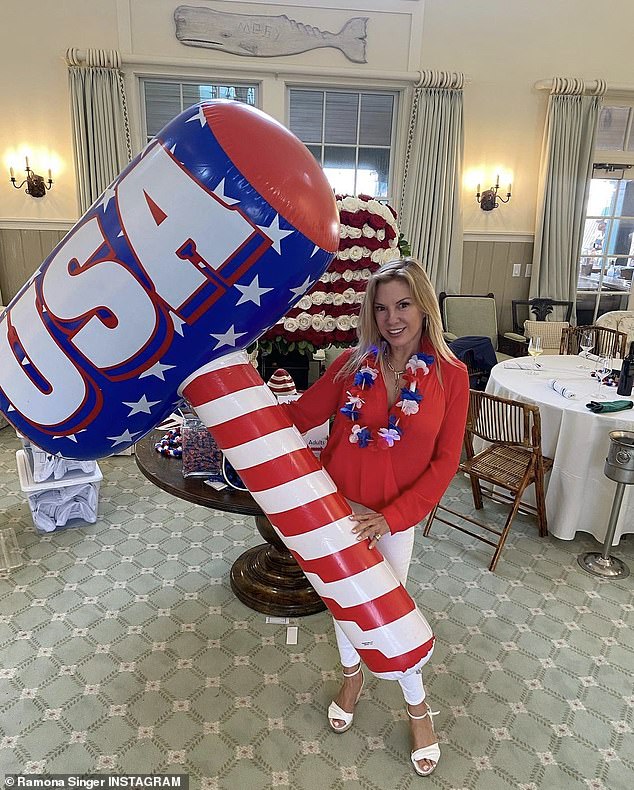 Patriot: The veteran housewife has skirted around tense conversations this season; pictured July 4 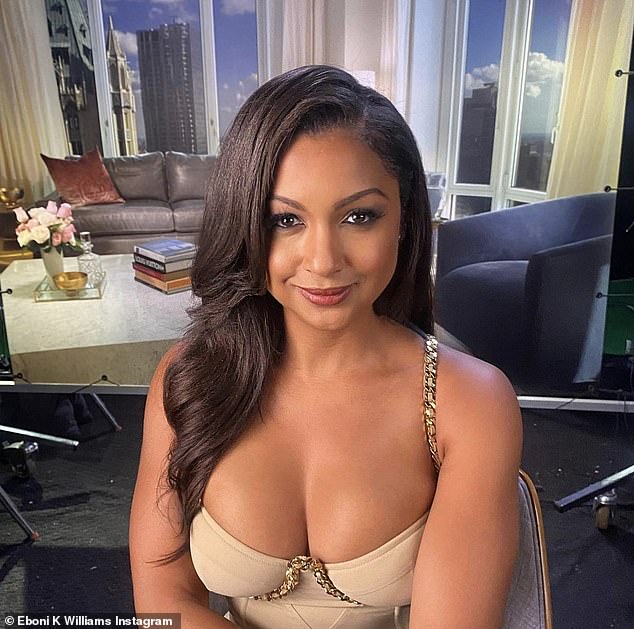 Going to bat: Eboni — the first Black RHONY castmate — has made it her mission to educate the women about race, and recently hit back at accusations fans were bored this seasons by her repeated conversations about race; pictured July 13

The ladies have had quite a few back and forths throughout the season with regards to race — though Singer has tried to remove herself from the dialogue on numerous occasions.

Upon inviting Eboni to stay at her South Hamptons manor, she offended her when she referred to her staff as ‘the help,’ which sparked the first conversation.

‘Am I in trouble now. I feel like I’m being talked to by a teacher,’ Ramona quipped. ‘There’s a button here — I’m really getting along with you nicely…can you tell me later? Cuz I know it’s going to be negative’ she continued. 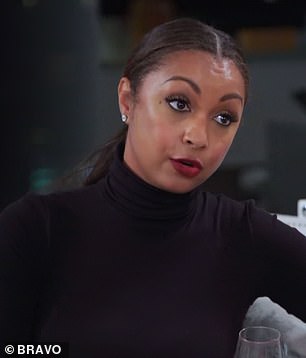 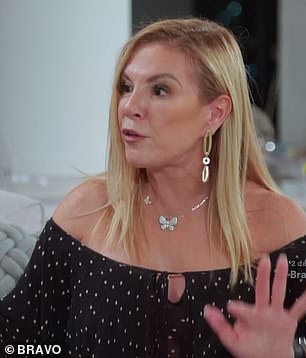 Politics: On another occasion Williams tried to broach the subject of politics with Singer during a one on one sit down to which she said: ‘Let’s just have a nice evening, I don’t want to talk politics’ 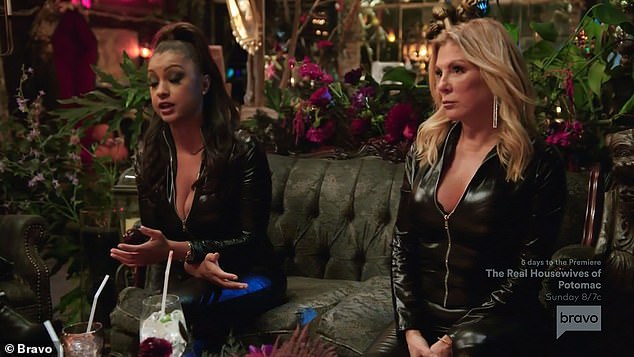 Tough conversations: At one point throughout the season Eboni told Ramona ‘Your white fragility is killing me right now’

And on another occasion she tried to broach the subject of politics with Singer during a one on one sit down to which she said: ‘Let’s just have a nice evening, I don’t want to talk politics.’

‘I’m going to take a step away because you know what, I don’t want to do this. I don’t. I’m liking you. I don’t know you that well, feel like you’re teaching me, you’re preaching me,’ Singer said while threatening to walk out of her own apartment on numerous occasions.

And recently Eboni seemed to continue to not so subtly make her stance on things with Ramona known as she retweeted a fan who wrote: ‘Ok wait…. did Ramona jokingly say to @EboniKWilliams “you’re a strong black b***h” #RHONY has my full attention this season.’

Ramona had also previously been accused by castmate Sonja Morgan of being a ‘master manipulator,’ after she posted a photo with Williams on social media just weeks apart from sharing another photo with new castmate Bershawn Shaw — who is also Black.

‘Are y’all telling me that Ramona is posting pictures rapid-fire of black women in her life to counter a narrative that she’s racist?,’ castmate Leah McSweeney quipped, which garnered a resounding ‘Yes’ from the group. 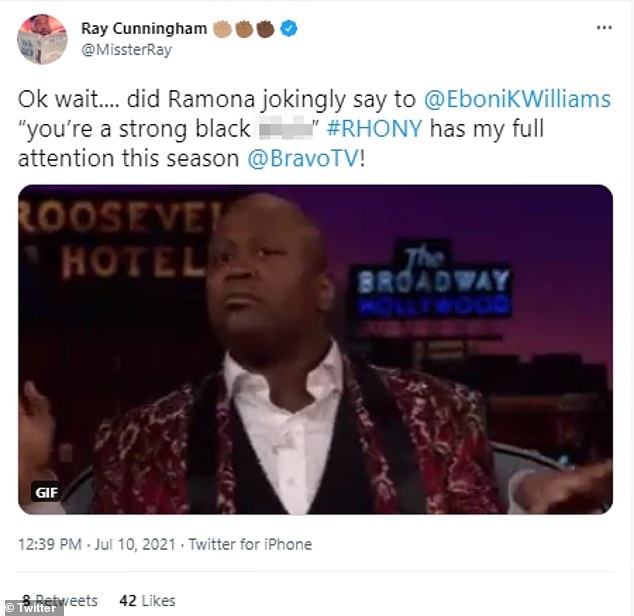 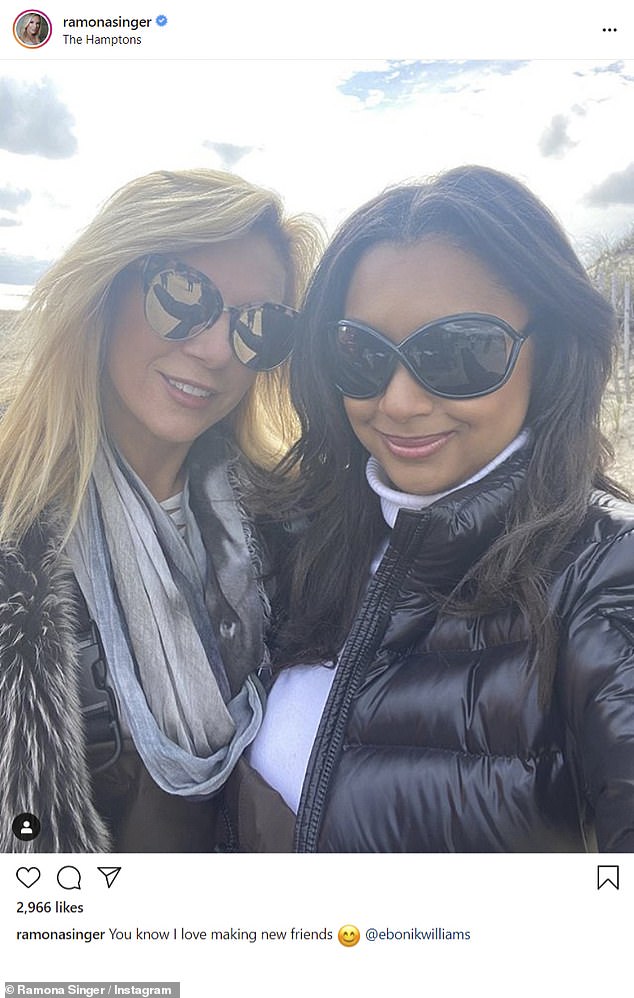 Counteracting a narrative: Ramona had also been accused of trying to ‘counter a narrative that she’s racist’ by posting photos with Black castmates Williams and newcomer Bershawn

Recently Eboni sparked outrage behind the scenes of Real Housewives Of New York after publicly blaming producers for the show’s sinking ratings this season.

She hit back at accusations fans were bored by her repeated conversations about race, telling TMZ it’s the producers who make the final cuts about what appears on TV.

Williams also said that the show has tackled sensitive issues like mental health, alcoholism, bankruptcy and divorce in the past, so race shouldn’t be taboo.

But three different sources inside the production exclusively told DailyMail.com they were shocked when they read TMZ’s story, with one pointing out: ‘Blaming production is the worst thing you can possibly do.’ 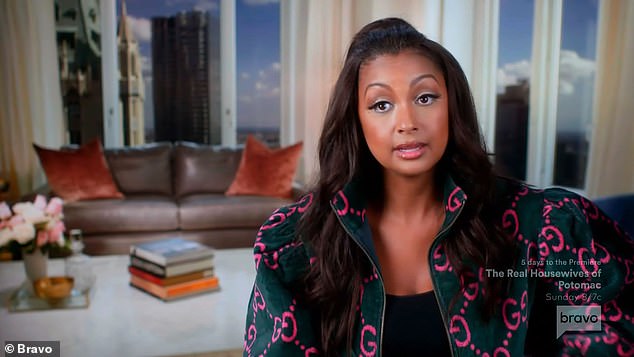 Blame game: RHONY insiders are shocked that star Williams has blamed the show’s plummeting ratings on producers after getting backlash for trying to tackle complicated conversations about race on the Bravo reality romp

‘First it was Ramona and Luann who Eboni said she had issues with – so what is it Andy Cohen’s fault now or Lisa Shannon’s (from Shed, the production company)?

‘Our network and production company take good care of us. They want our show to succeed. Andy takes all of our calls and cares about us and our show,’ the source explained.

‘We all want Eboni to be a success. The fact is EVERY woman who joins an existing cast is hazed to some extent. This did not happen to Eboni. The cast and crew were excited to have Eboni on the show and really made sure she became a fast friend and colleague.

‘It seems like Eboni is on a mission to take the show down. Speaking on the record to slam producers is shocking to me. Shocking.

‘She wants Ramona demoted, if not fired and now she’s going after production. This is not going to end well. Bring on the very much delayed reunion.’ 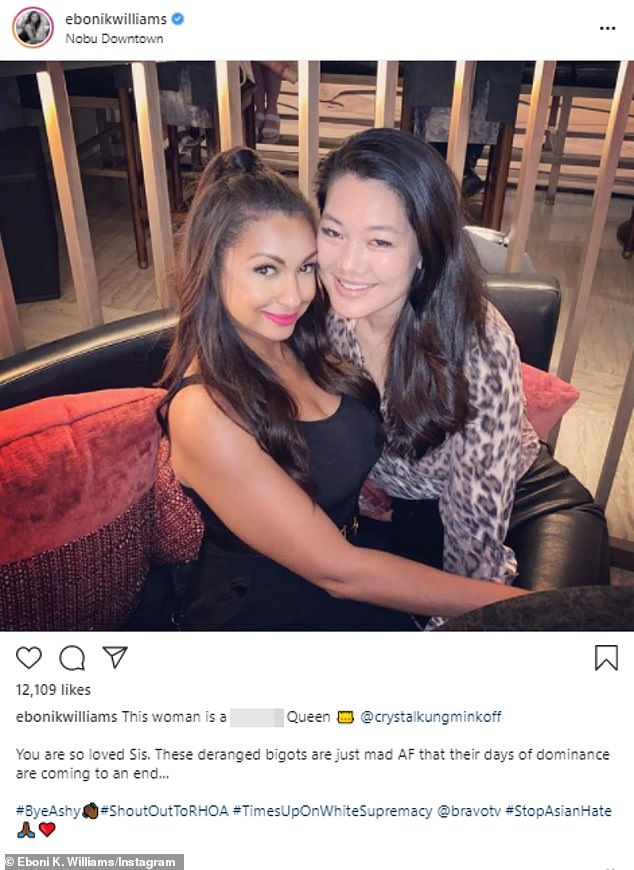 Clapback: Eboni fired back in a cutting Instagram post with castmate Crystal Kung Minkoff on Thursday, calling her a ‘f***ing queen’ and adding: ‘You are so loved Sis. These deranged bigots are just mad AF that their days of dominance are coming to an end… ‘

Eboni fired back in a cutting Instagram post with castmate Crystal Kung Minkoff on Thursday, calling her a ‘f***ing queen’ and adding: ‘You are so loved Sis. These deranged bigots are just mad AF that their days of dominance are coming to an end… ‘

She continued the message with tags that read: #ByeAshy, #ShoutOutToRHOA, #TimesUpOnWhiteSupremacy, #StopAsianHate and a tag for Bravo.

Last week the Bravo show recorded its lowest rated episode of all-time, earning only 764,000 live viewers. (The only episodes rated lower were the ‘secrets’ recap episodes for season seven and 12.) 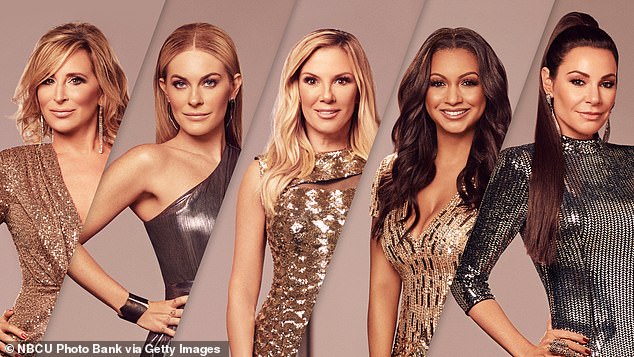