They jetted into Andalucia earlier this week for a sunshine break.

And, Vogue Williams stunned in a chic swimsuit as she and shirtless husband Spencer Matthews, 33, enjoyed a family beach day in the Costa Del Sol, Spain on Wednesday.

The DJ, 35, oozed elegance in her black swimwear, with a woven fedora bearing her married initials, VM, and classic shades keeping her sun-safe. 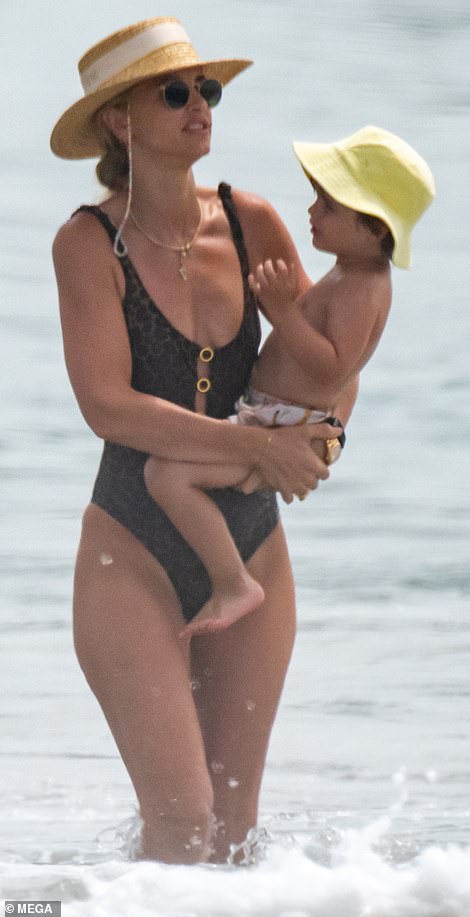 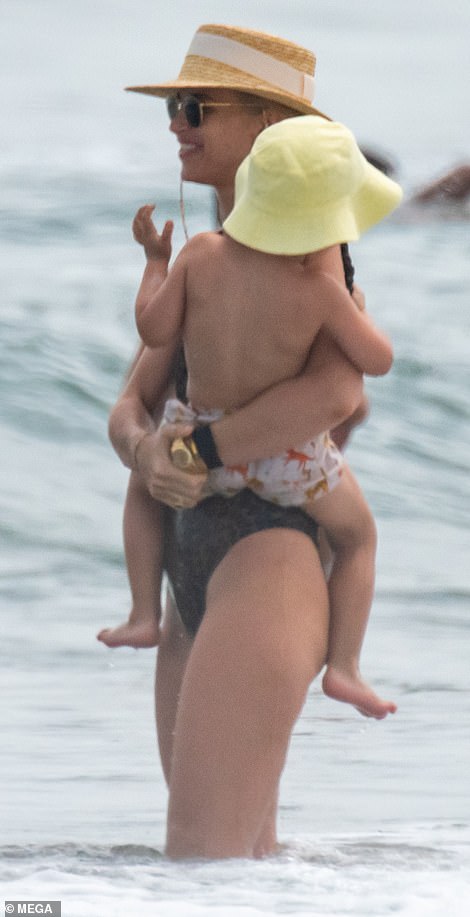 Hot mama! Vogue Williams, 35, stunned in a chic swimsuit as she enjoyed a family beach day in the Costa Del Sol, Spain on Wednesday

Vogue paraded her slim frame in the swimsuit which featured an eye-catching plunge-front held together by large gold buttons.

The TV personality accessorised with a smattering of metal jewellery and a beaded glasses chain.

MIC star Spencer showed off his buff body while cooling off in the sea during a break from his sunlounger.

Vogue was in the company of her shirtless husband and their two young children: Theodore, two, and one-year-old daughter Gigi. 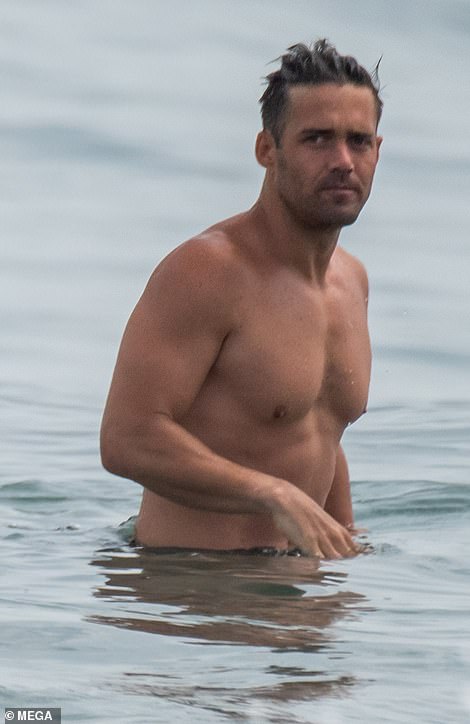 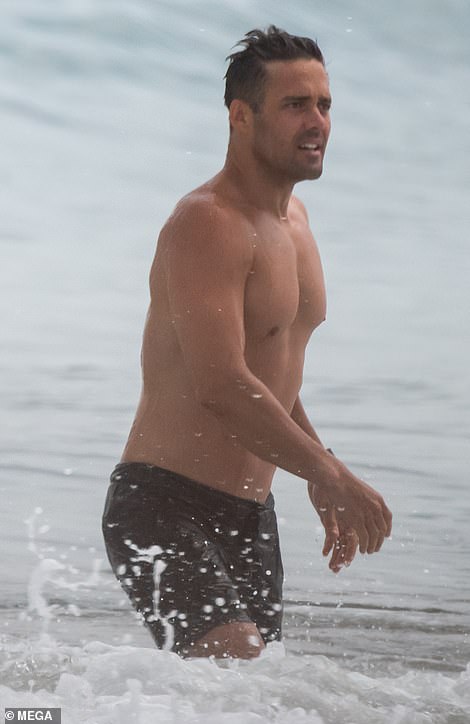 Buff! Her shirtless husband Spencer Matthews, 33, showed off his buff body while cooling off 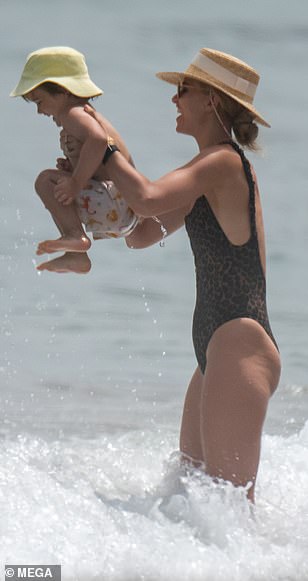 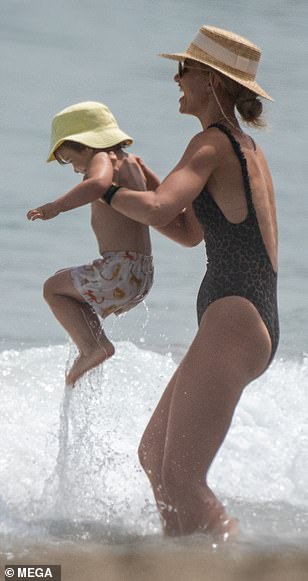 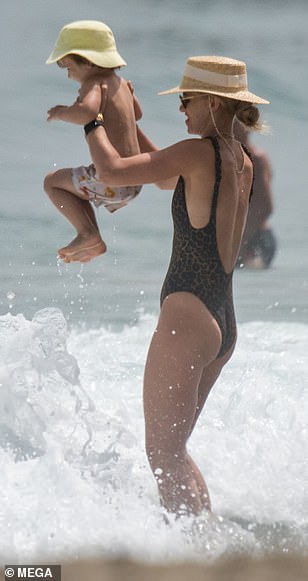 Family fun: The mother-of-two took Theodore, two, into the sea to splash about 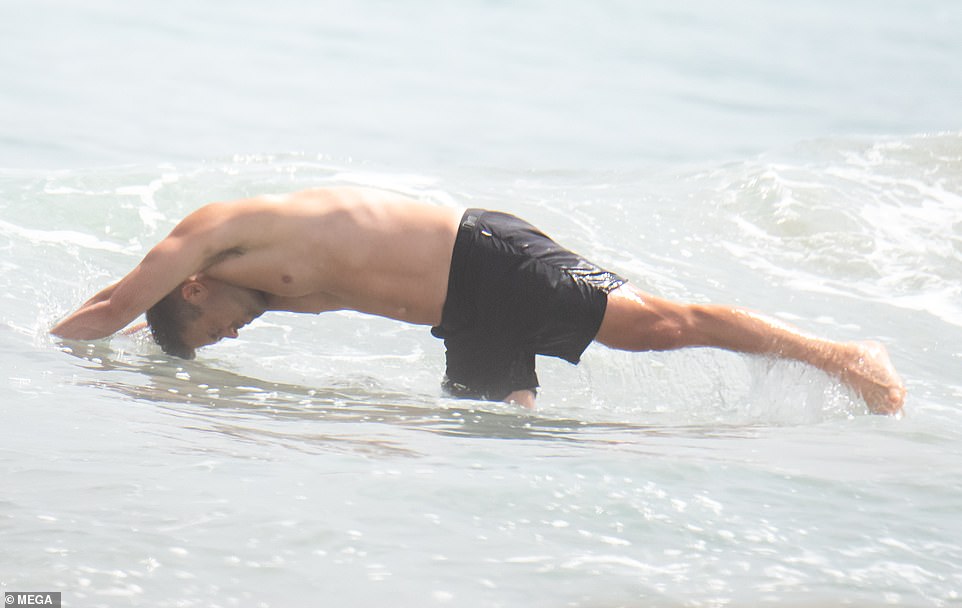 Athletic: Spencer showed off his swimming abilities as he dove into the sea 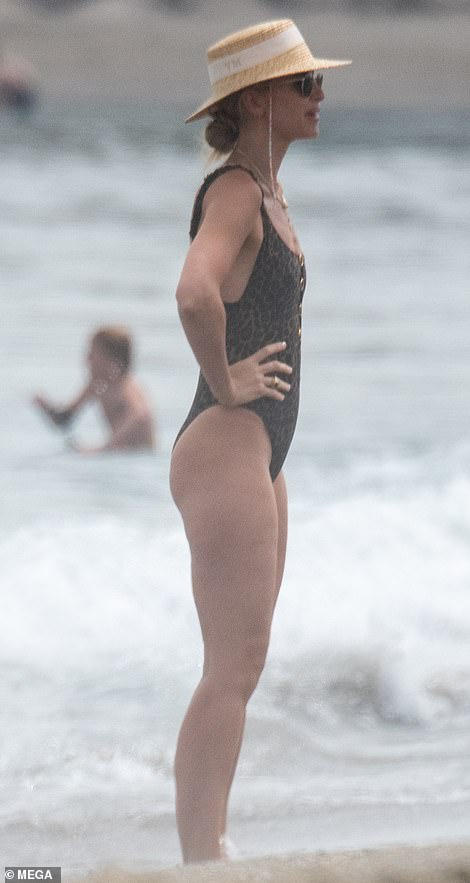 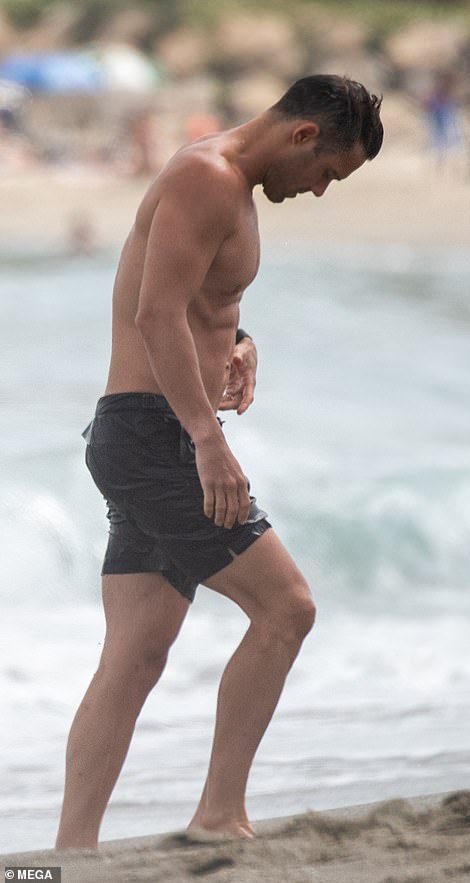 Hot stuff: Vogue and Spencer showed off their gym-honed bodies on the beach 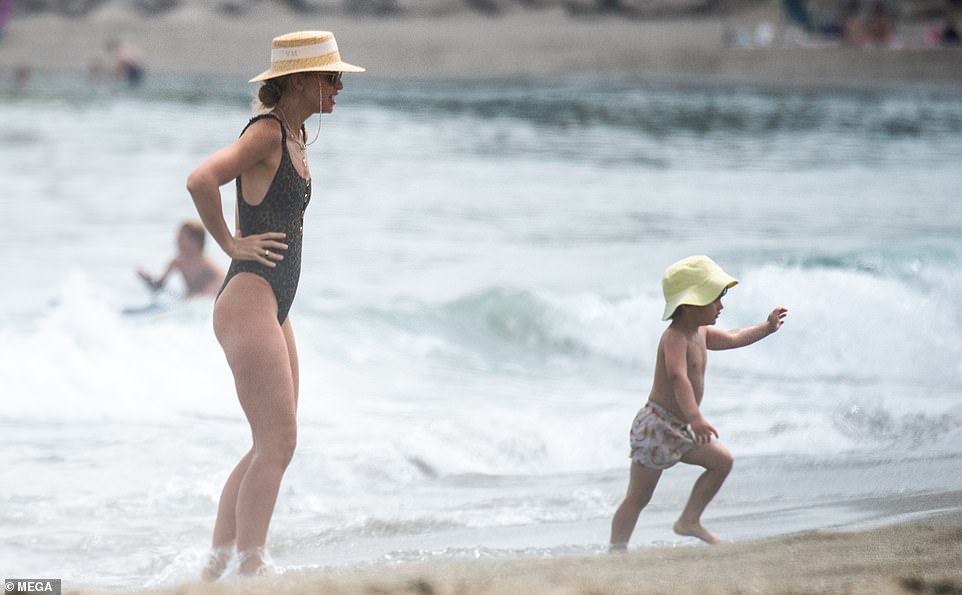 Energetic: Theodore ran along the sand as he enjoyed time with his parents

The DJ and her MIC star husband spoke on their podcast, Spencer & Vogue, when they revealed their unusual nickname for their daughter: ‘fat maggot’.

Vogue said: ‘I know, every parent loves their plump little fat daughter. We call ours the fat maggot.’

Explaining the name, Spencer said he likened his daughter to the insect and revealed he believes she will turn into a butterfly.

He said: ‘And she’s so sweet, she crawls around like a little maggot consuming anything she can get her hands on.’

‘Becoming plumper, and rounder, until one day, even though she’s not a caterpillar, she’ll turn into a beautiful Maggotfly, a butterfly, yeah.’ 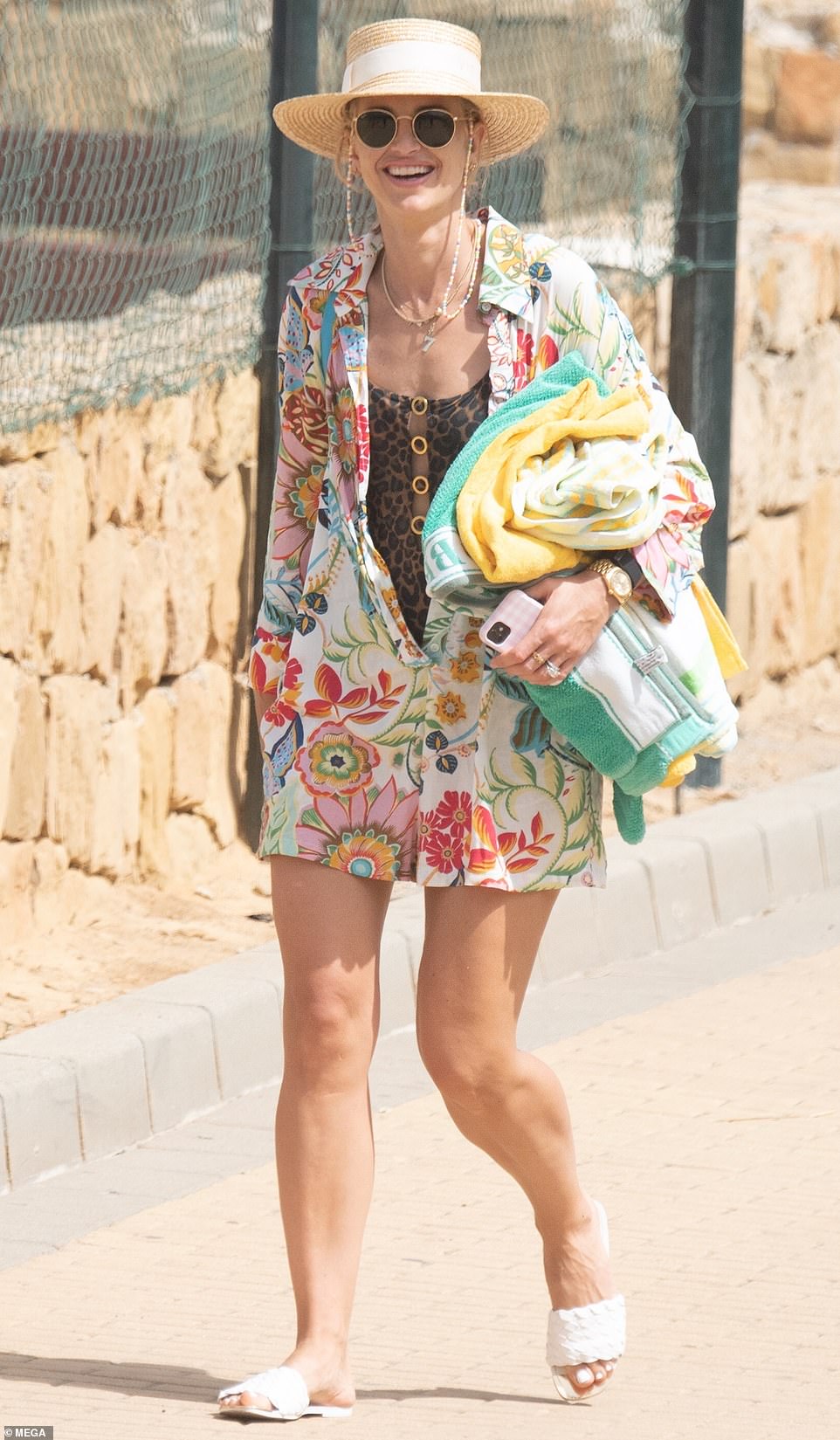 Fashionista: Vogue wore a floral tunic as a cover-up while making her way to and from the beach to enjoy a day in the Spanish sunshine 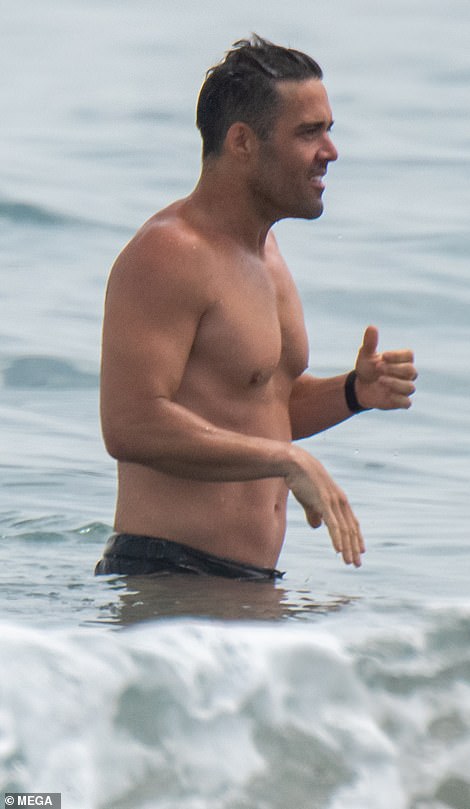 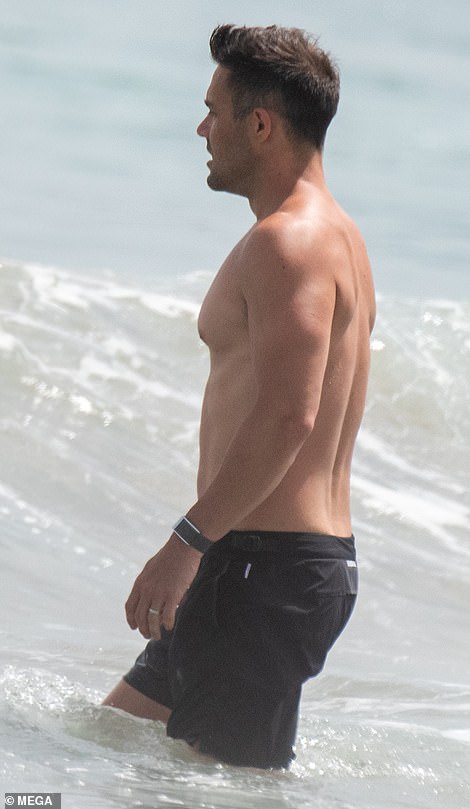 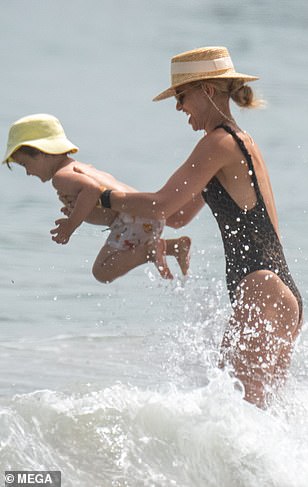 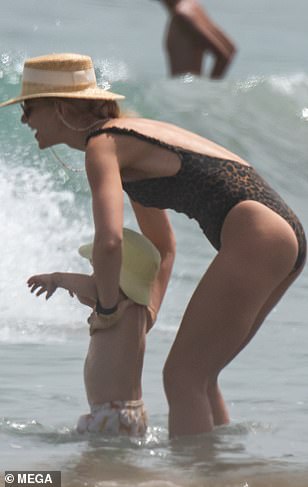 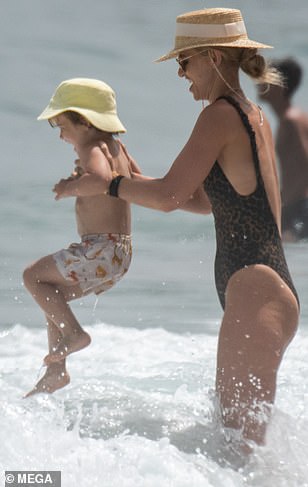 Water baby: Vogue’s baby boy shrieked with delighted as waves splashed up at him 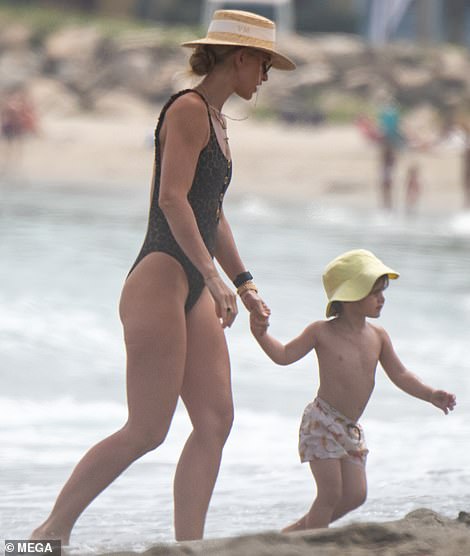 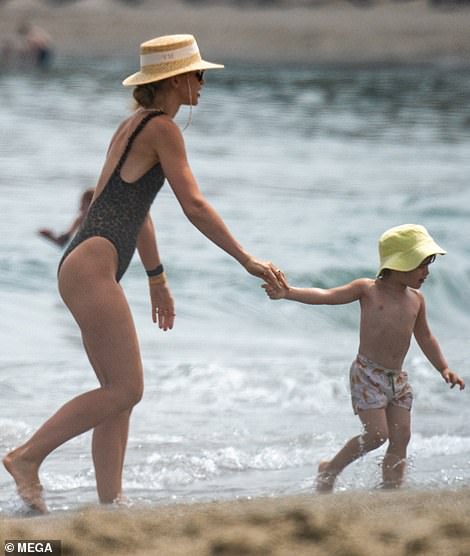 Mummy’s boy: The toddler held onto Vogue’s hang before speeding up 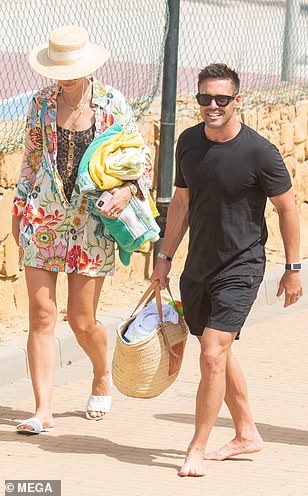 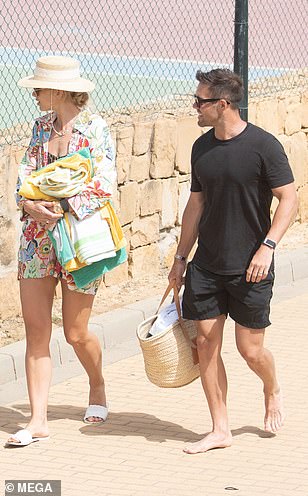 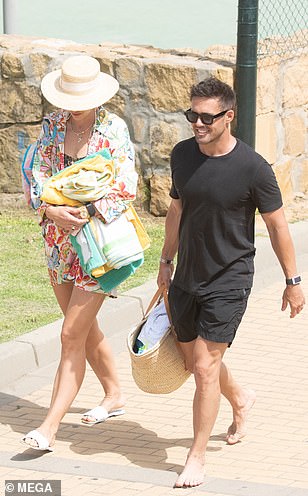 Gorgeous pair: Vogue and her handsome husband shared the load as they carried their belongings 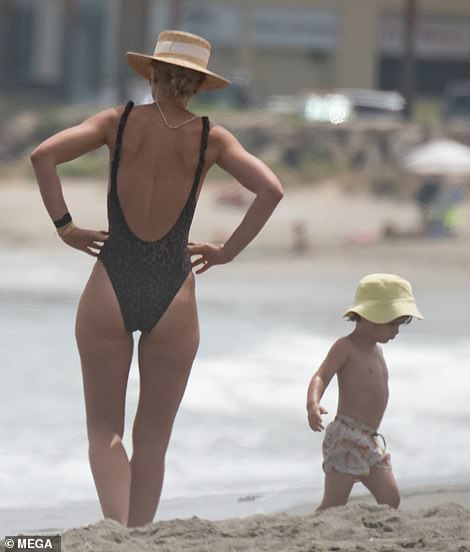 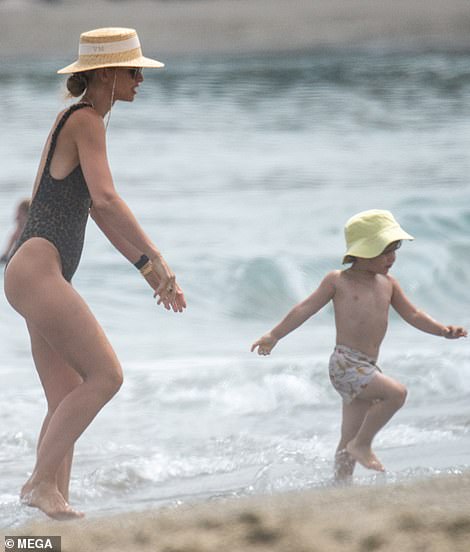 Little rascal: Theodore couldn’t be held back as he darted off with his little legs

Discussing their other child, son Theodore, Spencer said that he ‘drives you up the walls.’

He said: ‘He’s quite spoilt, he just whinges all the time and without drawing attention to the fact that I spent many months in Africa doing incredibly lovely charity work, none of those kids cried none of them.

‘Of course if they hurt themselves they might cry but I have spent time with loads and loads of two to ten-year-olds in Africa and they have nothing they never cry. Theodore cries in his mountain of toys because he can’t find something.’

Vogue then offered an explanation as to her son’s behaviour and said: ‘I don’t think you understand that is what a two-year-old does and the problem with Theodore was we were away.

‘Everyone kept giving him TV which he’s not allowed and he turns into the moodiest little naughty boy and that is why.’ 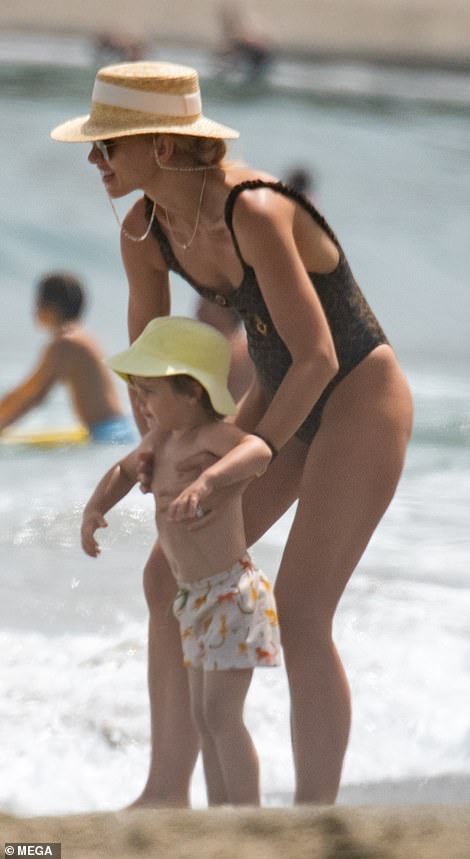 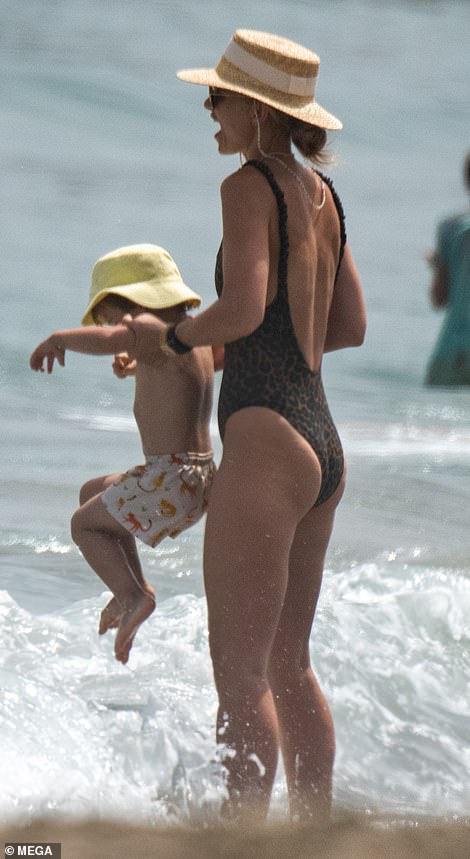 And again! Theodore couldn’t get enough of being hoisted above the waves by his mum 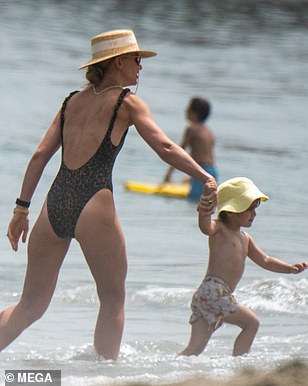 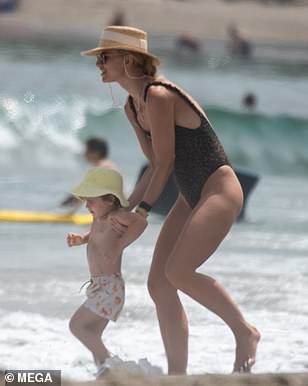 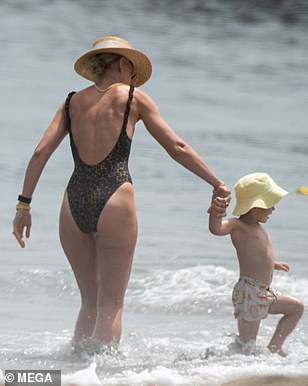 Centre of attention: Theodore commanded his mum’s attention as he ran about on the sand 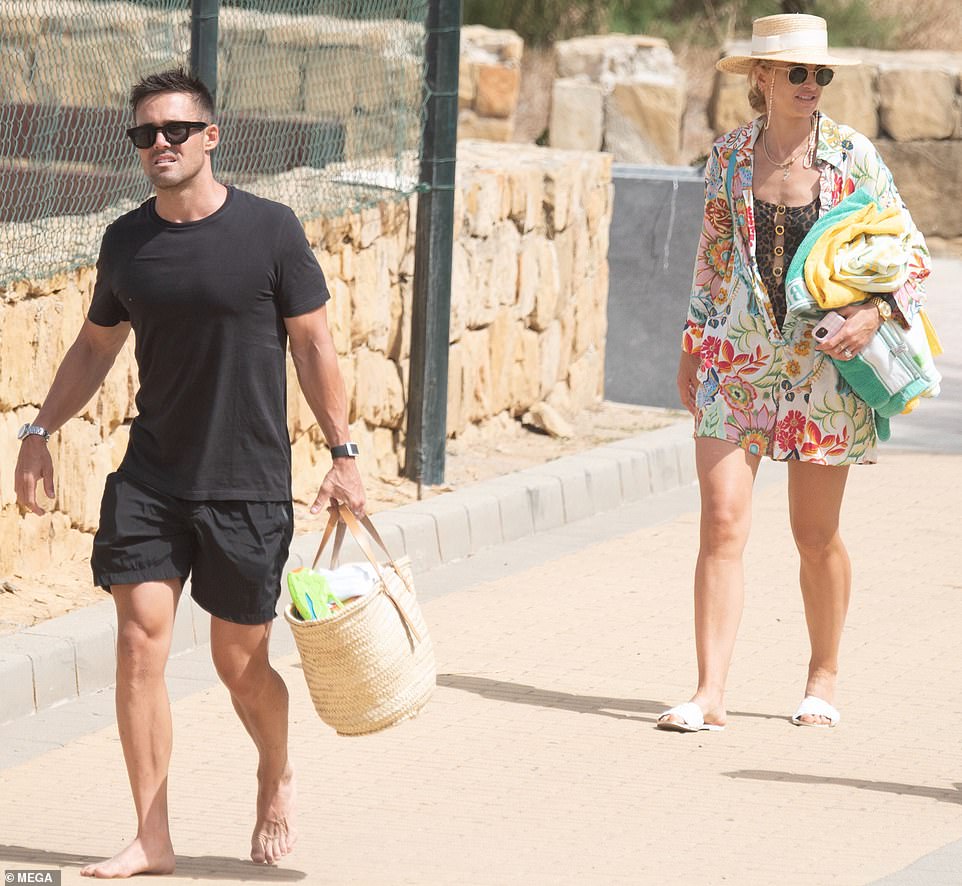 Teamwork: Spencer carried their woven bag while Vogue bundled towels in her arms