‘It’s a fun story and I have never taken that too seriously’: Olivia Newton-John continues to defend her Grease role amid sexism claims in wake of #MeToo

Olivia Newton-John has continued to defend her role as Sandy in Grease in wake of the #MeToo movement.

During Monday’s Loose Women, the actress, 72, whose character Sandy underwent a sexy makeover to win Danny’s heart, insisted the classic 1978 film is based on a ‘fun story’ and has never taken the criticism ‘too seriously’.

The screen star also noted that her love interest, played by John Travolta, also attempted to woo her by changing his persona, and admitted she doesn’t know whether the movie would work in today’s world. 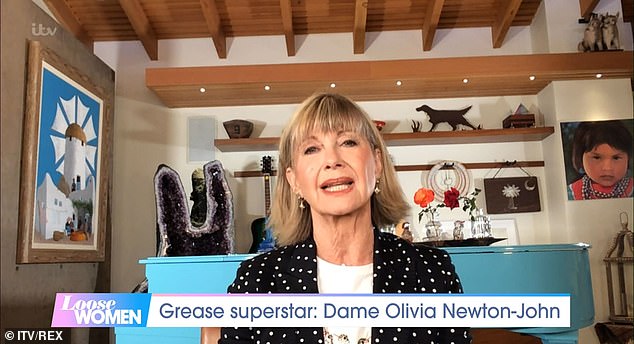 ‘It’s a fun story’: Olivia Newton-John continued to defend her role as Sandy in Grease in wake of the #MeToo movement during Monday’s Loose Women

When questioned if the hit film would be received the same way in current day, the media personality candidly said: ‘I don’t really know.’

The singer went on to address the backlash as she added: ‘I know there were some criticisms about me wanting to change to be like him but they forget that he wanted to change to be what I wanted. It’s a movie and it’s a fun story and I have never taken that too seriously.’

Olivia and John, 66, famously starred as two 1950s teens who are reunited as seniors in high school following a summer fling and attempt to rekindle their romance despite being from vastly different cliques.

After arriving at Danny’s school as a prim and proper girl, Sandy transforms into a biker chick, donning a skintight black catsuit and leather jacket. 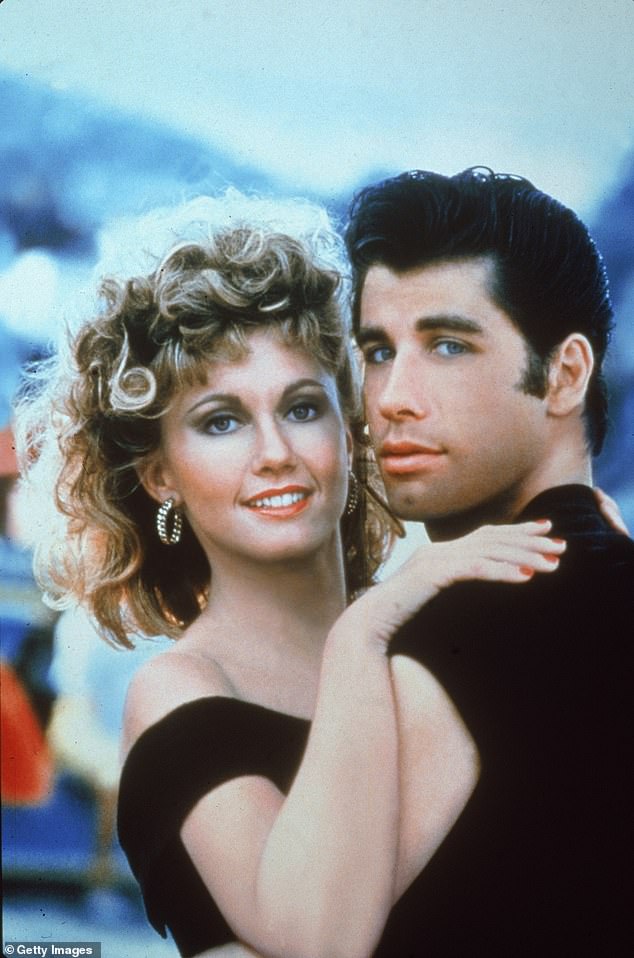 ‘People forget that!’ The actress, 72, noted that her love interest, played by John Travolta (pictured in the film), also attempted to woo her by changing his persona 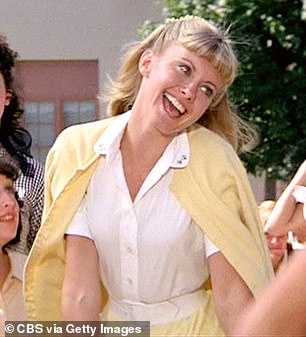 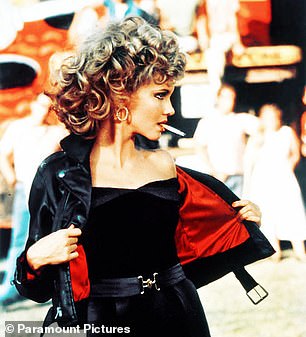 New look: In the 1978 film, her character ditched her prim and plain style (left) for a sexy new look (right) to win Danny’s heart

The leading lady opts to switch up her look despite Danny insisting he’d ditch his biker persona and become a jock to be with her, with many fans insisting it’s sexist that she was the one who changed her appearance.

For years it’s been claimed that Grease promotes a questionable representation of women, but the argument gained speed in the wake of the #MeToo movement, which increased awareness of women in media.

Throughout the film, it seems that the male T-Birds’ sole focus is having sex with their girlfriends, whatever the consequences.

Among moments under scrutiny was the controversial lyric ‘Did she put up a fight?’ from the song Summer Nights, which some have claimed could be a reference to sexual abuse or rape.

Confessing she wasn’t unaware of how successful the musical comedy would have been, the If You Love Me, Let Me Know hitmaker reflected: ‘I don’t really think anyone had a clue.

‘I mean, the stage show had been a huge success for a long time so there was a lot of talk about the movie and it was a very popular show.

‘Nobody could have imagined the success the movie has enjoyed, especially all these years later – 41 years later and people are still talking about it! It’s pretty amazing, I’m pretty lucky.’ 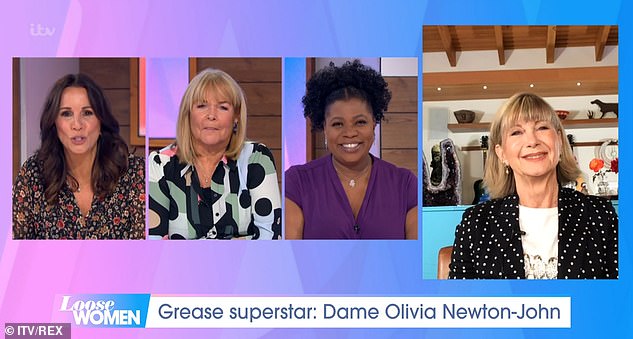 Candid: When questioned if the hit film would be received the same way in current day, the media personality candidly said: ‘I don’t really know’ 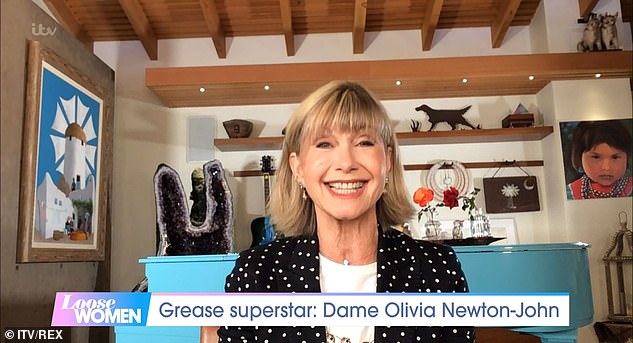 ‘I have never taken that too seriously’: The singer went on to address the backlash and also confessed ‘no one had a clue’ how successful the movie would have been

The musician said: ‘John and I are still friends which is wonderful, he is a lovely lovely guy and so talented.’

Paying tribute to his late partner, she added: ‘Kelly was a wonderful, beautiful spirit inside and out, and so it was incredibly sad.

‘It just strengthened my resolve for my Foundation even more. I have lost quite a few friends in the past year and it made me even more determined to see a world beyond cancer.’

The activist went on to update viewers on her health, after her breast cancer returned three years ago.

‘My husband [John Easterling] is a plant medicine man… That’s really why I started my Foundation, to introduce the idea of plant medicine into the world of cancer and hope that we can see an end to it.

‘You can make a choice on what you think and how you think about it… If I hadn’t experienced breast cancer, I wouldn’t be doing the things I am doing now.

‘I wouldn’t have lent my name to a cancer wellness centre in Australia, I wouldn’t want to start this Foundation to try and find kinder therapies for cancer, which is my goal… For me it gives me purpose and it gives me a reason to get up everyday. 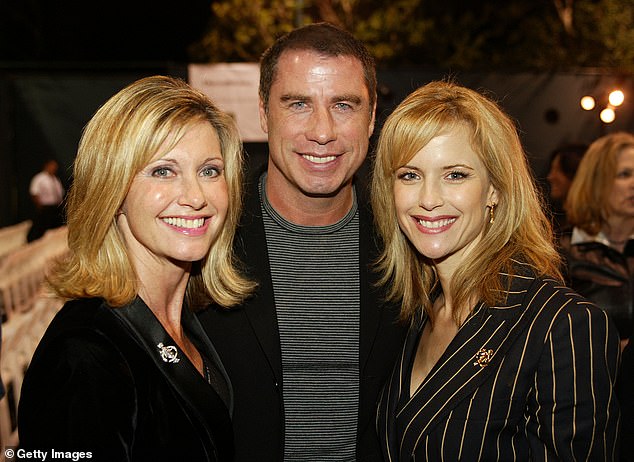 ‘We’re close and her death is so sad’: The artist shed light on her friendship with actor John,  66, who lost his wife Kelly Preston to cancer earlier this year (pictured together in 2002)

‘I am so grateful for every day anyway, and if I can give back and help other people, then that is really what I want to do.’

On her decision to use medicinal cannabis instead of chemotherapy, the You’re the One That I Want singer, who previously credited her battle as a ‘gift’, detailed: I did have radiation a couple of years ago when I had a fractured sacrum.

‘I was in my hospital in Australia and I did have radiotherapy. I haven’t had chemotherapy since my first bout with cancer which was in ’92 and I am lucky enough to be married to a wonderful man who grows medicinal cannabis for me and knows a lot about many other herbs.

‘There are hundreds of plants and herbs and a hundred thousand in the Amazon rainforest alone. I have been lucky enough to be the beneficiary of that and it has helped me greatly.

‘I want to do the science on it and find out if what I am experiencing can be true for everybody, and that is what we are raising money for.’

Last month, Olivia echoed her comments about Grease as she hit back in an interview with The Guardian: ‘It’s a movie. It’s a story from the 50s where things were different.

‘Everyone forgets that, at the end, he changes for her, too. There’s nothing deep in there about the #MeToo movement. 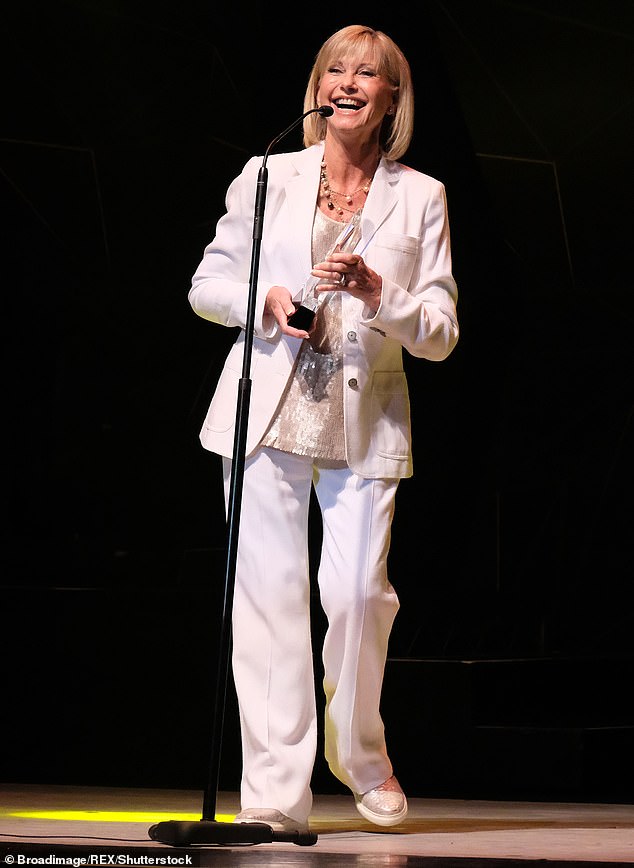 ‘I am great, I feel really good’: The activist went on to update viewers on her health, after her breast cancer returned three years ago (pictured in August 2019)

However, some have backed the film as a feminist piece, with Dr Barbara Jane Brickman detailing the argument in her book Grease: Gender, Nostalgia and Youth Consumption in the Blockbuster Era.

She said: ‘Coming towards the end of the swinging 1970s but supposedly lacking any condemnation of the 1950s era, Grease was criticised for being a reactionary piece of (white) male fantasy, one longing for a time when boys could be boys, women knew their place, and there was no racial conflict (or diversity, for that matter).

‘The film is, through much of its action, a girl’s film – exploring girls’ ”bedroom culture” and fandom, wrestling with and critiquing that sexual double standard impinging itself on Rizzo and Sandy, and focusing on female teen friendships, more so, one might argue, than many, many teen films then or since.’