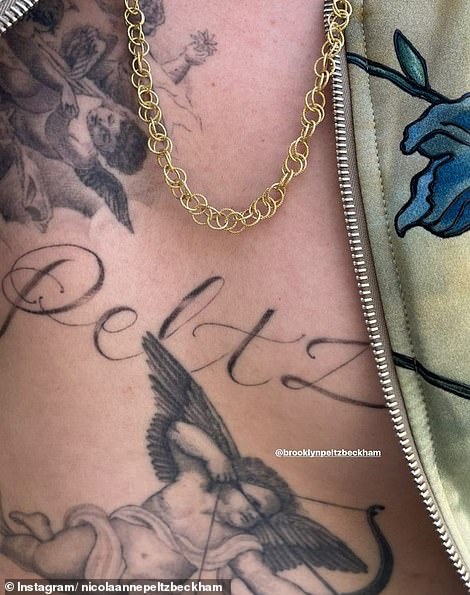 Nicola Peltz added fuel to rumors of an Insta-feud with Victoria Beckham by pointedly posting an image of her husband Brooklyn’s ‘Peltz’ tattoo – just 20 minutes after DailyMail.com called out speculation of a social media froideur between the model and her mother-in-law

Nicola Peltz Beckham is a young woman who is fond of making passionate declarations of love.

On Thursday night the 27-year-old posted a picture on her Instagram Story of her husband Brooklyn’s chest – focusing on the word ‘Peltz’, which he has inscribed in a huge cursive tattoo across it. A cherub with an arrow sits underneath.

The message seems clear: this man belongs to me, and my family.

Brooklyn, 23, who is the oldest son of David and Victoria Beckham, made the unusual step of taking Nicola’s family name when he married; the couple have both changed their names to become Peltz Beckhams.

However, this tattoo was done in February, ahead of the lovebirds’ mega-wedding, which took place in April at the Peltz family’s Palm Beach mansion, and two months before Brooklyn officially became a Peltz Beckham.

‘I’m so happy you’re a Peltz @brooklynbeckham,’ Nicola wrote while sharing the original image of the inking.

She shared the picture again just 20 minutes after DailyMail.com published a story asking why she so seldom likes any posts made by her Beckham in-laws.

Needless to say, the timing of the model’s latest post showcasing the tattoo appears particularly pointed.

Could it be a not very subtle hint about a family rift? Certainly, it will only stoke talk of an Insta-feud. 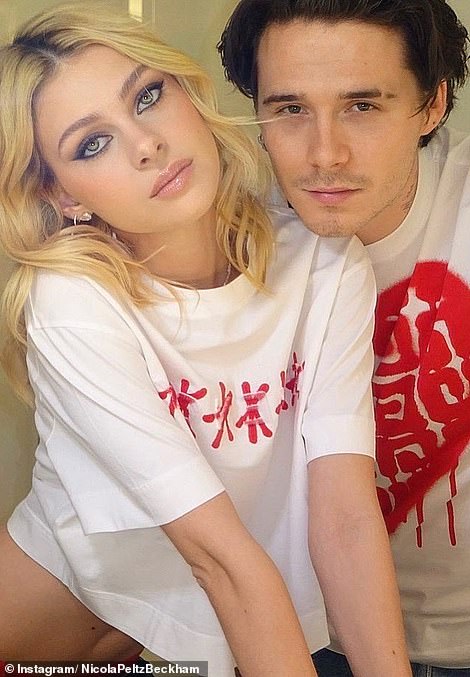 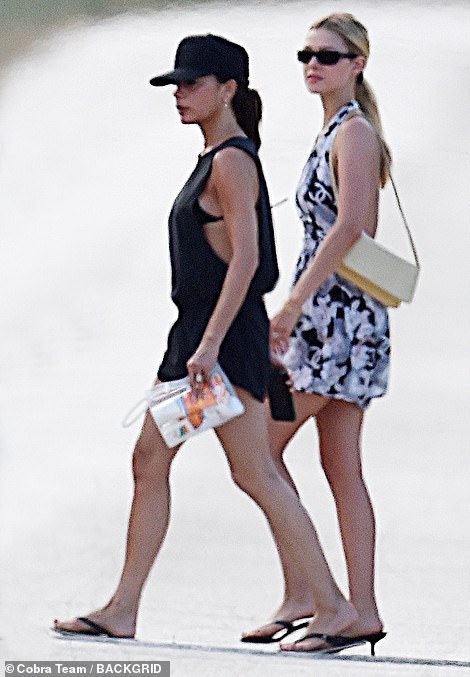 Speculation about chilling relations between Nicola, 27, and Victoria (pictured right together in July 2020), 48, emerged after it was revealed that Posh Spice has failed to ‘like’ any of the model’s Instagram posts for almost two months – including images of Brooklyn and his wife (pictured left together) on their honeymoon 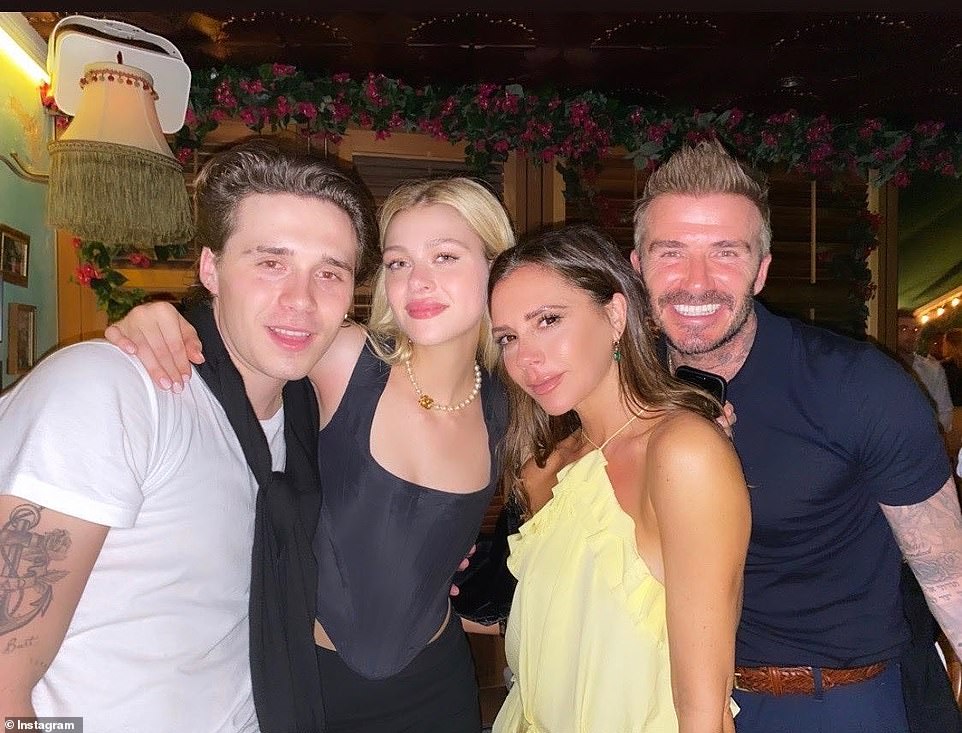 It can be revealed that it is nearly two months since Posh last liked one of Nicola’s posts on May 26 – and she hasn’t liked any of the images that the younger woman has shared from her honeymoon with Brooklyn.

Nicola meanwhile hasn’t liked Posh posts about her 29th Vogue magazine cover, about her wedding anniversary with David, or even about Harper’s 11th birthday. She also didn’t like a post wishing David a happy Father’s Day – despite the fact that the post featured her husband Brooklyn.

The model did however like one recent post shared by fashion designer Victoria five days ago, which featured a series of photos of the Beckhams’ youngest child, daughter Harper, posing in front of a mirror.

Still, the chilling Instagram relationship between Nicola and Victoria is in marked contrast to the once-loving online connection that used to exist between them, which was gushing to say the least.

Last summer, in the three months between the start of June and the end of August, Victoria liked 20 of Nicola’s posts, exclaiming on August 29: ‘Kisses! We love you!’

In that same period, Nicola liked 25 of Victoria’s posts — everything from her prospective mother-in-law’s fashion collection being featured in Vogue Korea to her eye pencils.

However, since Nicola and Brooklyn tied the knot, a chill appears to have set in as far as the two women’s social media interactions.

In fact, in the three months since the couple said ‘I do’ in a lavish ceremony, which was attended by the entire Beckham family, Nicola has liked only five posts out of 131 put up on Instagram by Victoria. And in that same period, Victoria has liked only six out of 35 posted by Nicola.

Questions have been asked about the Beckhams’ apparent exclusion from the honeymoon, too.

It turns out the Nicola and Brooklyn were on honeymoon with the Peltz family, comprising father Nelson, mother Claudia and at least one of her brothers, on a yacht off the coast of Italy.

At the same time the Beckhams were on a smaller yacht in a party which included sons Cruz and Romeo and daughter Harper.

I’m told that although both parties were aboard yachts off the coast of Italy at the same time, they didn’t meet because they weren’t in the same place at once. 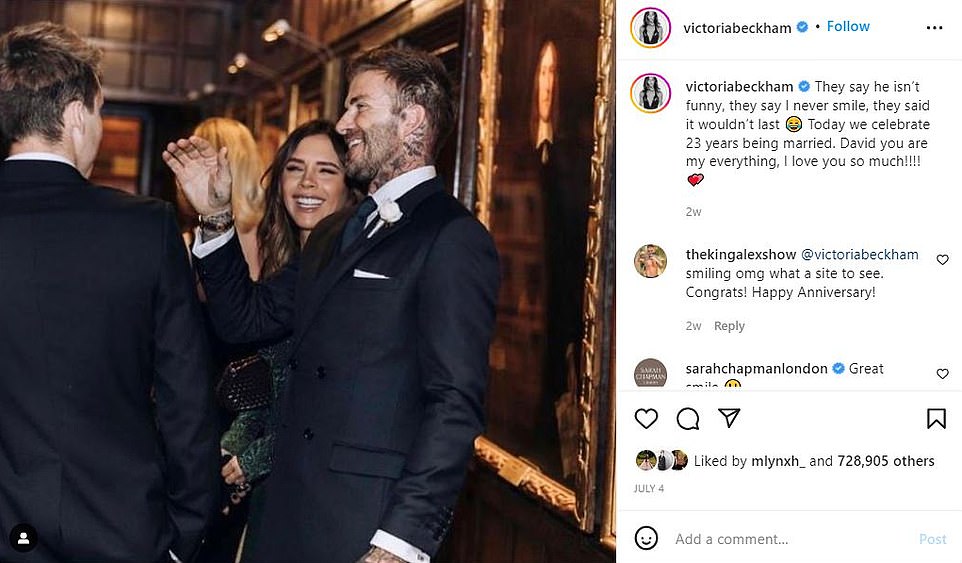 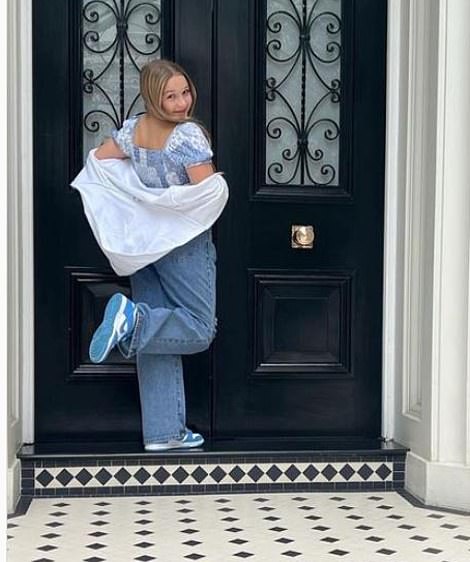 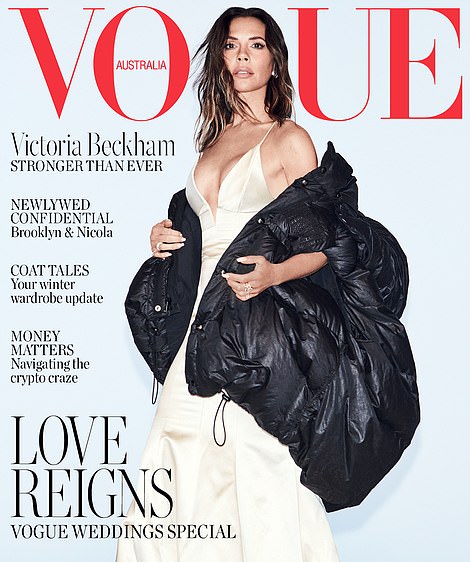 However Posh and Becks did see Brooklyn and Nicola for a dinner in Venice during the Beckhams’ anniversary getaway earlier this month, so relations must be friendly enough in real life. All of which begs the question of what on earth is going on online – and why.

Perhaps Brooklyn is just taking his cue from the advice he was given by Nicola’s ‘man of honor’, her brother Brad Peltz, at the wedding. ‘Rule number one: Happy wife, happy life,’ he said. ‘Rule number two: Don’t f*** up rule number one.’

However this is not the first time that there have been rumors of a rift between Nicola and another member of the extended Beckham clan; prior to the speculation over her cooling relations with Victoria, reports surfaced suggesting that there was tension between the model and Mia Regan, the ex-girlfriend of the Beckhams’ youngest son, Romeo.

It was claimed Victoria was planning to hold a clear-the-air girls’ lunch between her son Brooklyn’s new wife and Romeo’s then-model girlfriend, whom he split from earlier this month.