A fundraiser for the late Broadway star Nick Cordero, who passed away over the weekend due to complications related to COVID-19, has raised close to $1 million in support of his surviving family members, wife Amanda Kloots and their one-year-old son Elvis.

As of Monday evening, a GoFundMe fundraiser page for Cordero, who died aged 41 on Sunday in Los Angeles, California, had amassed a total $916,571 to help pay for medical and funeral expenses.

The sum should come as a small measure of solace for Kloots, 38, since her late husband was bound to an LA-area hospital for an astounding 94 days before succumbing to his illness. 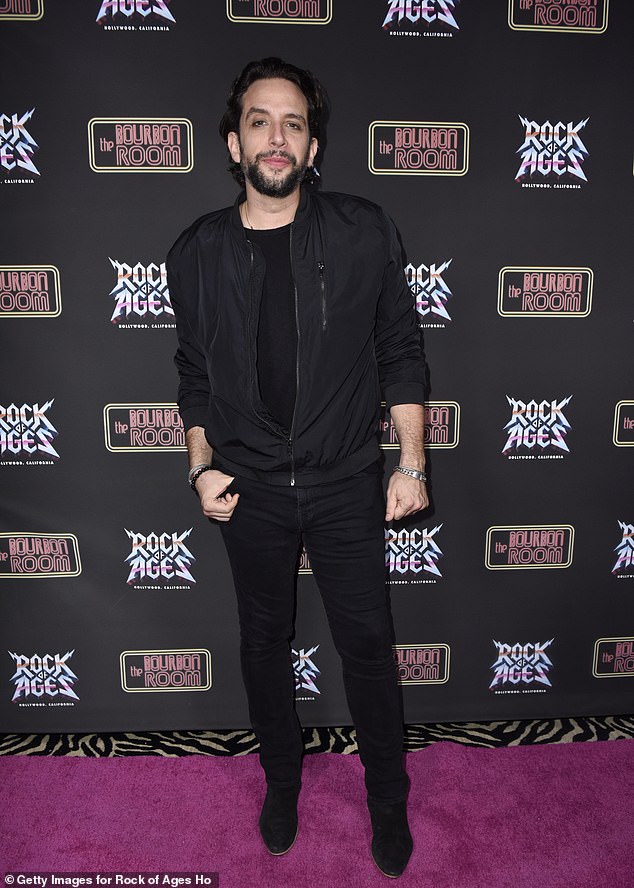 In memoriam: A fundraiser for the late Broadway star Nick Cordero, who passed away over the weekend due to complications related to COVID-19, has raised close to $1 million; Nick seen here last December

In one of her last updates on social media before Nick passed, the ever-candid Amanda revealed she was planning to refinance her home to ‘pay bills’ as they mounted in connection to his prolonged hospital stay.

But now, as famous friends from Zach Braff and Florence Pugh to Katherine McPhee and Lin-Manuel Miranda have posted moving tributes to Nick on social media, it seems that fans and friends touched by this tragedy have come forth in support of Amanda to donate whatever they can in Nick’s memory.

‘We are heartbroken to update this account to a memorial,’ the GoFundMe page, which was created on April 18th, now reads. 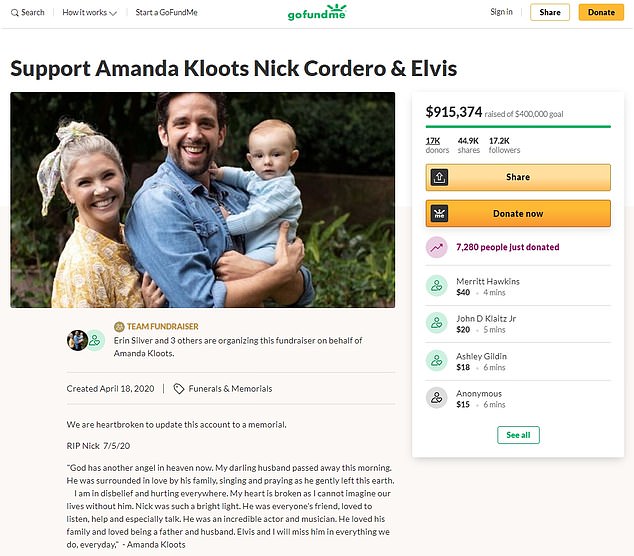 As of Monday evening: The GoFundMe fundraiser page for Cordero, who died aged 41 on Sunday, had amassed a total $916,571 to help pay for medical and funeral expenses

Cordero entered the hospital due to his coronavirus infection almost a month prior, on March 31st.

Nick was unconscious when he was first hospitalized, and he was initially mis-diagnosed with pneumonia.

The Waitress star later tested positive for the novel coronavirus, on April 1st.

From there Nick’s battle went from one complication to the next, as he was placed on a ventilator and experienced blood clot issues which eventually led to the amputation of his right leg.

He also received a temporary pacemaker, and entered a medically-induced coma. 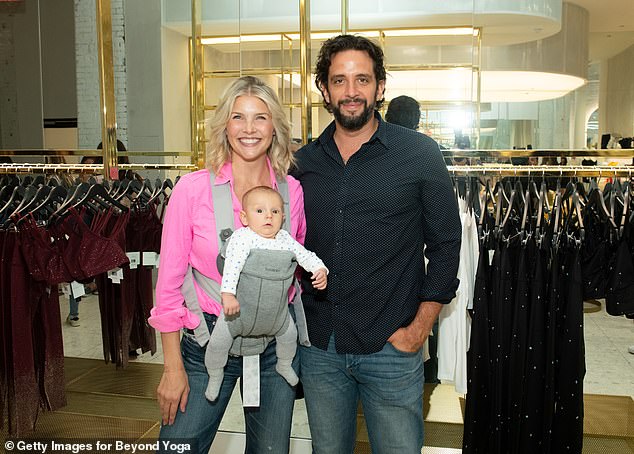 Gone too soon: Cordero entered the hospital due to his coronavirus infection on March 31st; Nick seen here with wife Amanda Kloots and son Elvis seen in August 2019 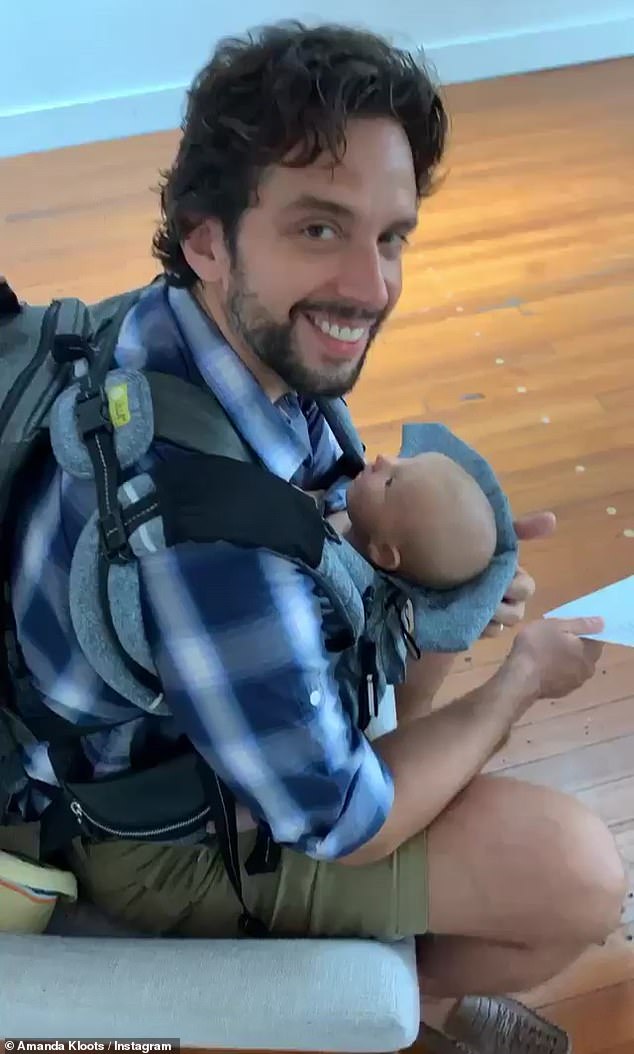 ‘We are heartbroken to update this account to a memorial,’ the GoFundMe page, which was created on April 18th, now reads; Nick seen on his wife’s Instagram in an undated photo

Over the last few months, Nick was able to come off the ventilator and wake up from his coma, but the infection left his body and lungs so weak that he was never fully able to bounce back.

In spite of it all, his wife Amanda remained a beacon of positivity, keeping her Instagram followers informed of his stop-and-start progress every step of the way.

As Nick was a Tony Award-nominated musical theater performer, many of the updates and shows of support on Kloots’s social media were infused with song and dance.

And while the GoFundMe campaign was initially intended to raise a goal amount of $400,000 to help with medical expenses, that sum has more than doubled as of one day after the actor’s tragic death on Sunday, July 5th. 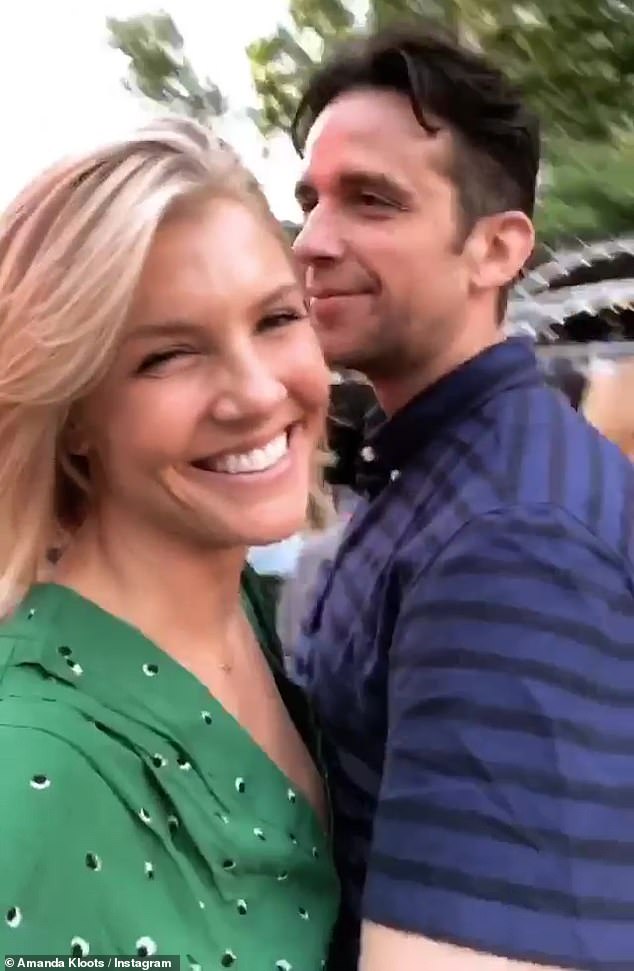 In spite of it all: Nick’s wife Amanda remained a beacon of positivity, keeping her Instagram followers informed of his stop-and-start progress every step of the way

‘God has another angel in heaven now. My darling husband passed away this morning. He was surrounded in love by his family, singing and praying as he gently left this earth,’ she wrote.

‘I am in disbelief and hurting everywhere. My heart is broken as I cannot imagine our lives without him. Nick was such a bright light.’

Kloots explained that Cordero was ‘was everyone’s friend, loved to listen, help and especially talk’ and that he was ‘an incredible actor and musician.’

‘He loved his family and loved being a father and husband. Elvis and I will miss him in everything we do, everyday,’ said Kloots.

She went on to thank the medical team that aided her husband in his tumultuous months-long health battle. 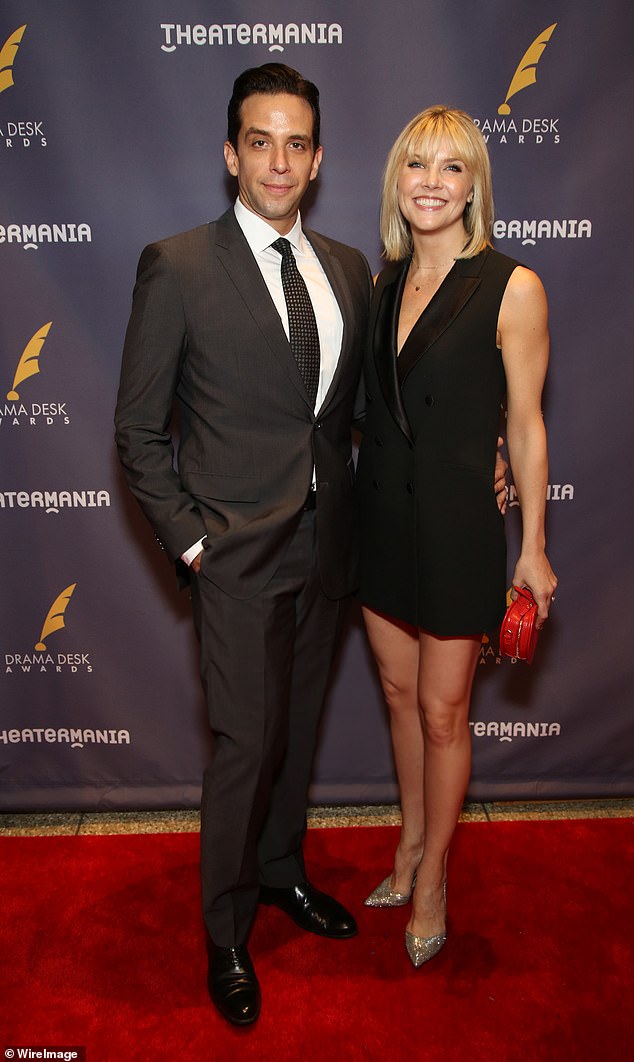 Tragic: Cordero’s death was announced by his wife in a heartbreaking post on Instagram on Sunday; seen together in June 2017

‘To Nick’s extraordinary doctor, Dr. David Ng, you were my positive doctor! There are not many doctors like you. Kind, smart, compassionate, assertive and always eager to listen to my crazy ideas or call yet another doctor for me for a second opinion. You’re a diamond in the rough.⠀

‘I cannot begin to thank everyone enough for the outpour of love , support and help we’ve received these last 95 days. You have no idea how much you lifted my spirits at 3pm everyday as the world sang Nicks song, Live Your Life. We sang it to him today, holding his hands.

‘As I sang the last line to him, “they’ll give you hell but don’t you light them kill your light not without a fight. Live your life,” I smiled because he definitely put up a fight. I will love you forever and always my sweet man,’ Kloots concluded. 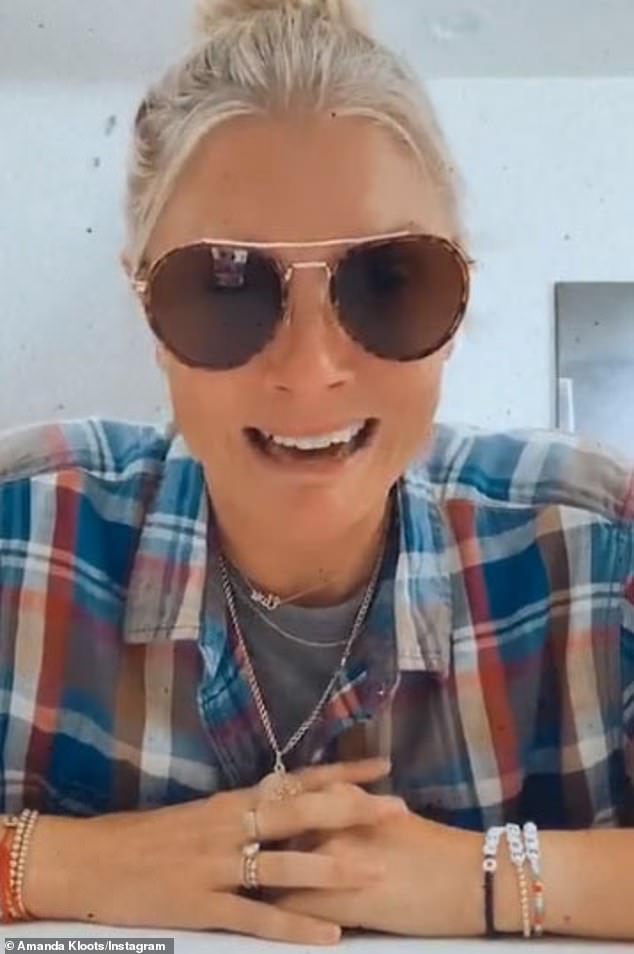 Poor Scott Disick… we really do feel for you with this one, pal! Kourtney Kardashian‘s baby daddy is perhaps the one star of Keeping Up with the…