‘If you thought it was a lot of kids last year…’: Nick Cannon hints he may be having even MORE children as he expects an eighth baby

Nick Cannon could be expecting even more children this year, as he awaits the birth of his eighth child.

The 41-year-old television personality has six children: twins Moroccan and Monroe, 11, with ex-wife Mariah Carey; Golden, five, and Powerful Queen, one, with Brittany Bell; and twins Zion Mixolydian and Zillion Heir, who will turn one later this month, with Abby De La Rosa.

His seventh child, son Zen, whom he had with Alyssa Scott, passed away just two months after he was born. 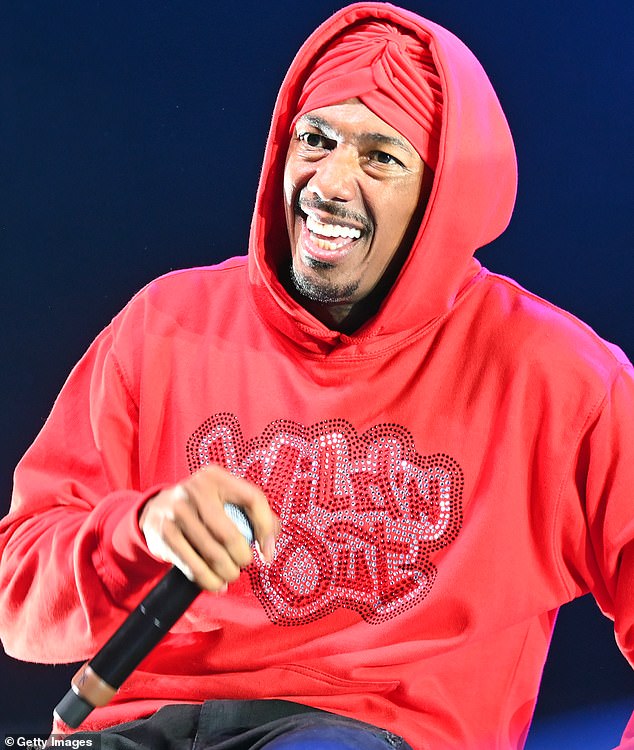 Baby news: Nick Cannon could be expecting even more children this year, as he awaits the birth of his eighth child

In January Nick announced he is expecting an eighth child, this time with model Bre Tiesi.

Speaking on the Lip Service podcast, he said: ‘Let’s just put it this way… the stork is on the way.’

When asked if he’s currently expecting three children, he played coy, saying: ‘I don’t know, it could be…’

Nick then suggested he plans on breaking his personal fatherhood record by declaring: ‘If you thought it was a lot of kids last year…’ 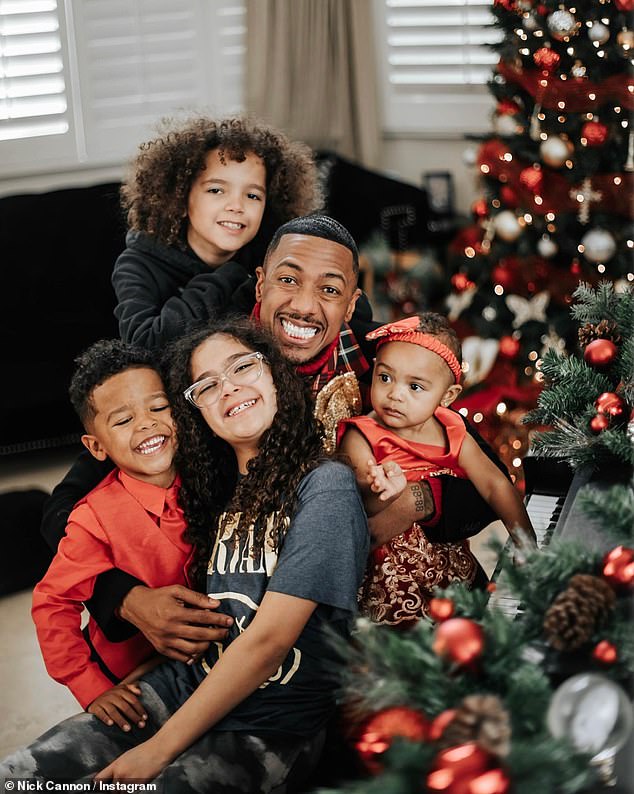 Revealing: The 41-year-old television personality said: ‘Let’s just put it this way… the stork is on the way’ (pictured with Moroccan, Monroe, Golden and Powerful Queen

When co-hosts Angela Yee and Gigi Maguire asked if fans can expect him to have a handful of children in September and October, he laughed before responding: ‘Y’all are pretty good at math.’

It comes after Nick said he doesn’t need the mothers of his seven children to like one another and insisted that he isn’t ‘built’ for marriage.

He opened up about the relationships between the five mothers of his kids in an interview on The Big Tigger Morning Show. 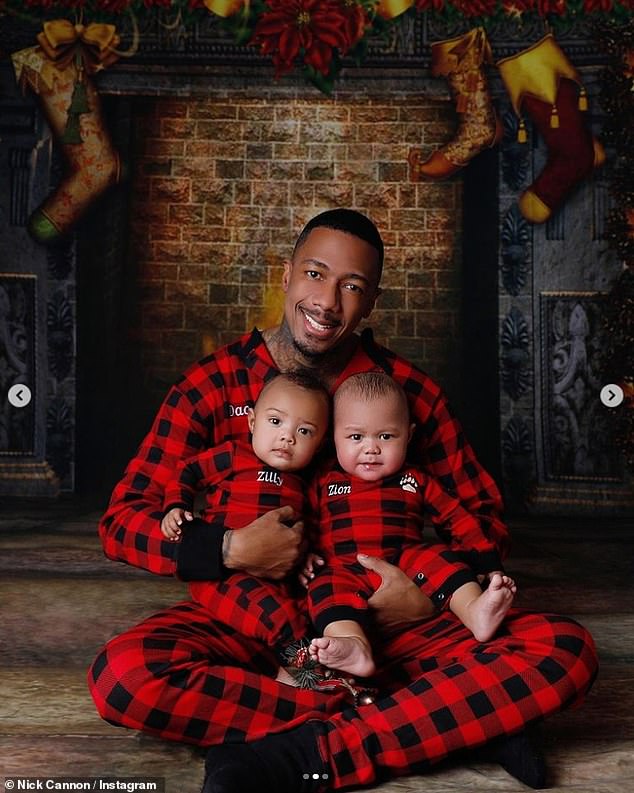 Keeping tight-lipped: When asked if he’s currently expecting three children, he played coy, saying: ‘I don’t know, it could be…’ (pictured with Zion Mixolydian and Zillion Heir) 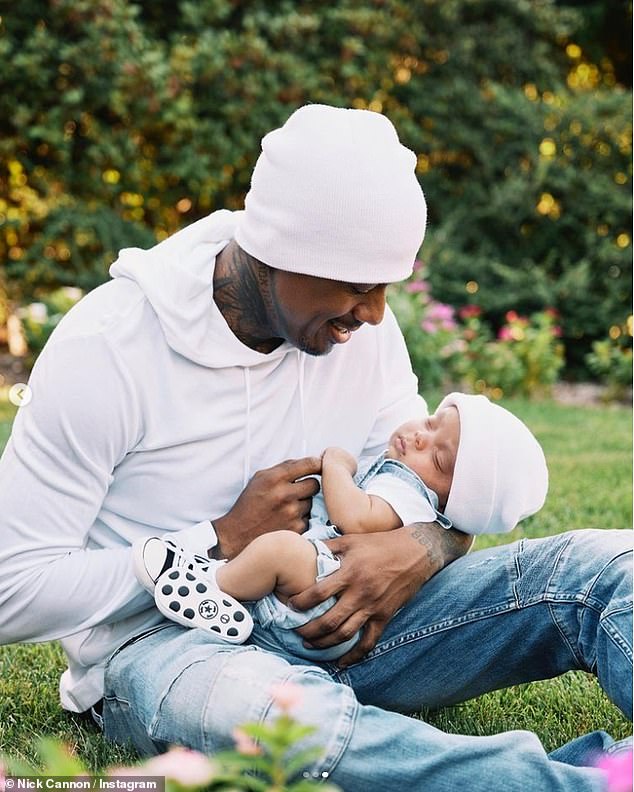 Tragic: His seventh child, son Zen, whom he had with Alyssa Scott, passed away just two months after he was born

He was asked on the show whether or not ‘all the baby mamas get along’.

The Drumline singer quickly replied: ‘They don’t have to, they all get along with me.’

He went on to take about going to a consultation for a vasectomy which he previously opened up about on an E!’s Daily Pop segment.

Despite the appointment, Cannon said he didn’t totally rule out the possibility of having more children in the future. 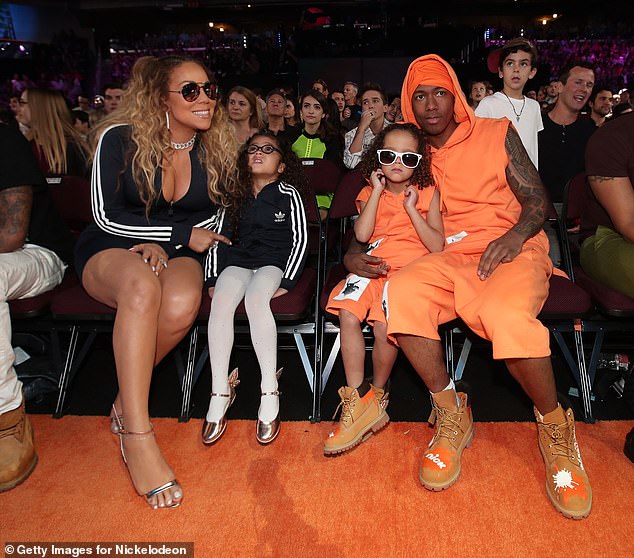 Wedding: Nick admitted that he isn’t ‘built’ for marriage as he spoke about his union to Mariah Carey from 2008 to 2016. He shares twins Monroe and Morracan, 10, with the singer

‘I embrace all my children, I love children, but I wasn’t setting out to be Father Abraham, I just embrace it.’

Elsewhere, Nick admitted he isn’t ‘built’ for marriage as he reflected on his union to Mariah Carey from 2008 to 2016.

Although he described his marriage to Mariah as one of the ‘greatest experiences’ of his life, he insisted that the legal partnership doesn’t play to his strengths.

Speaking on the ‘It’s Tricky with Raquel Harper’ podcast about his and Mariah’s marriage, he said: ‘That, to me, was one of the greatest experiences of my life, and for that to have come to an end … why would I go back, if I couldn’t make that work out right?

‘Once I gave my all to a scenario going forward, I’d have to be presented with something I’d never seen before, never experience, in order for me to be willing to go back to do something like that.

‘Because I did my best in this space, and now there’s a new journey in my life that’s different.

‘I’m not going to backtrack and put myself in that position again, because it doesn’t get any better than that.

‘I love my family, all of my children, and every woman that has given me the blessing of being able to experience that.

‘But marriage, and all that goes into that, is so … it’s a lot. You’re literally entering a partnership where two become one. I’m not built for that.’

He recently admitted it is ‘challenging’ juggling the needs of his children and their mothers.

Nick said he is still able to ‘communicate’ with all of his kids every day, despite the complex set up of his personal life, and he hopes things continue to run ‘smoothly’ as his brood gets older.

He said: ‘It’s definitely challenging. I give respect and honour to all the mothers because they’re wonderful, outstanding people.

‘The extracurricular activities, schooling, education, it’s structured in such a way to where no one feels like they’re not getting enough time.

‘Contrary to popular belief, where people might think there’s no way he could be present to all of them, it has worked out phenomenally.

‘I just pray that it continues to work as smoothly as it does because I’m able to see and communicate with all my children every single day. I give everyone their respected time, whatever is needed of me.’

Nick and his partner Bre pair went on a tropical babymoon earlier this month at the Sugar Factory American Brasserie in the Bahamas which they turned into a sponsored job as well.

Nick couldn’t keep his hands off his future baby mama’s belly as the two posed in front of candy dispensers together.

Bre Tiesi is the ex-wife of former NFL quarterback Johnny Manziel. The pair married in 2018 and divorced last year. 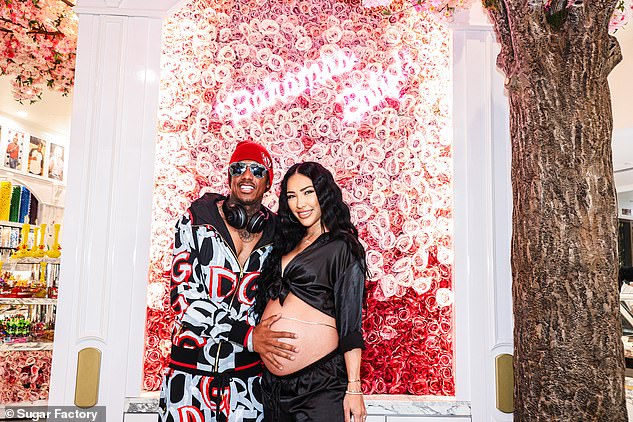 Another child: Cannon is expecting his eighth child with model Bre Tiesi later this year