France’s greatest seducer – or just Monsieur Naff? A new book claims Catherine Deneuve was one of Johnny Hallyday’s thousands of lovers… despite his tacky clothes, cheesy songs and orange tan

By the time of his death aged 74 in 2017, in Britain and the U.S. Hallyday had become the personification of Gallic naffness, renowned for his sexual exploits — politely glossed over by the French Establishment — as much as his music.

In France, however, he remained a national hero — and this week, the country is reeling at the news that ‘France’s Elvis’ conducted a steamy, secret affair over many decades with film star Catherine Deneuve.

A new book published in Paris reveals the pair were lovers of 60 years’ standing. 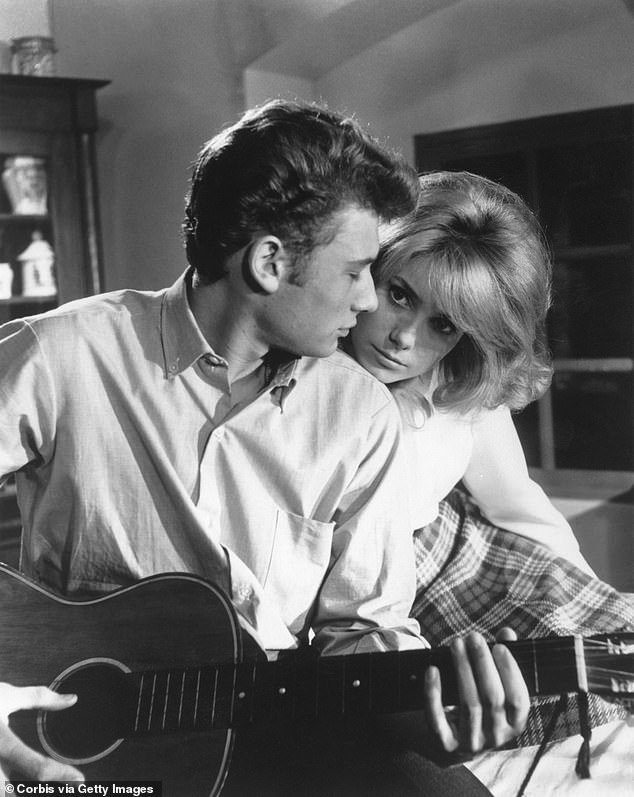 Since the early 1960s, when they met as teenagers, they conducted passionate and frequent liaisons without anyone in France — or anywhere else — having an inkling.

To avoid the paparazzi, the duo would travel through Europe with the impeccably dressed Deneuve squashed into the car boot or lying down in the footwell. Their affair lasted almost until Hallyday’s death from cancer.

The new revelations are all the more astonishing because theirs was, at first sight, such an unlikely coupling. Deneuve, now 76, is well-known to British audiences as an icily aloof Hollywood star.

She made her name in Luis Bunuel’s 1967 film Belle De Jour, playing a sophisticated but bored French housewife who decides to take a part-time job as a prostitute.

But there was nothing sophisticated or aloof about Johnny Hallyday. Born Jean-Philippe Léo Smet in 1943, he became a fantastically successful singer who sold 110 million records in the French-speaking world — but virtually none anywhere else. 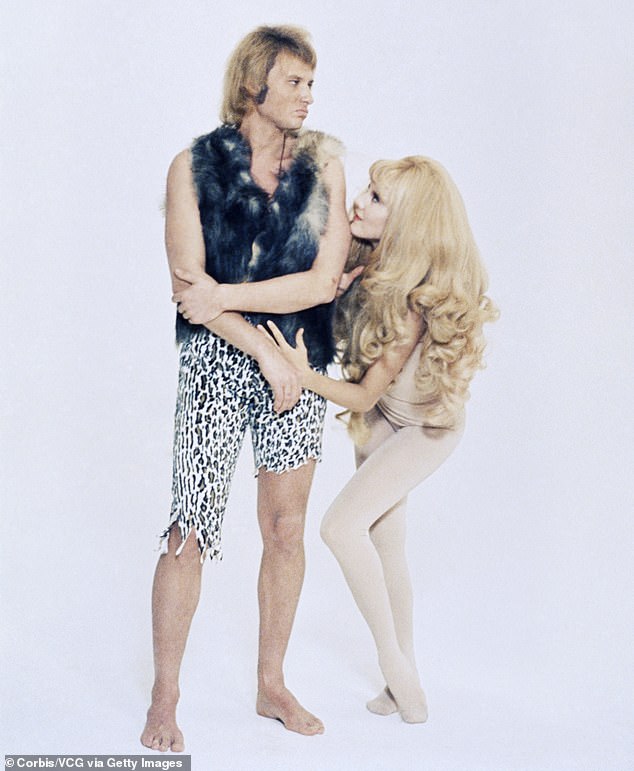 Hallyday’s first marriage to Sylvie Vartan, with whom he had a son, ended in divorce in 1980

Often described in the international press as ‘the biggest pop star you’ve never heard of’, after his death, he was given the unusual honour of a French state funeral, attended by President Emmanuel Macron, his wife Brigitte, and former presidents Nicolas Sarkozy and Francois Hollande. As a million fans processed through Paris, the rest of the world looked on in bafflement.

Yet perhaps some of Hallyday’s appeal to his countrymen lay not in his voice, undeniable charisma and lasting influence in bringing rock ’n’ roll to France — but in his reputation as an unquenchable lothario.

Throughout his adult life, his libidinous lifestyle meant he had no shortage of young fans and groupies. He surpassed the real Elvis in sexual conquests. And, unlike Elvis, with Hallyday there was no respite from sex: no reclusive phase in which he disappeared into his private mansion, self-isolating with cheeseburgers. 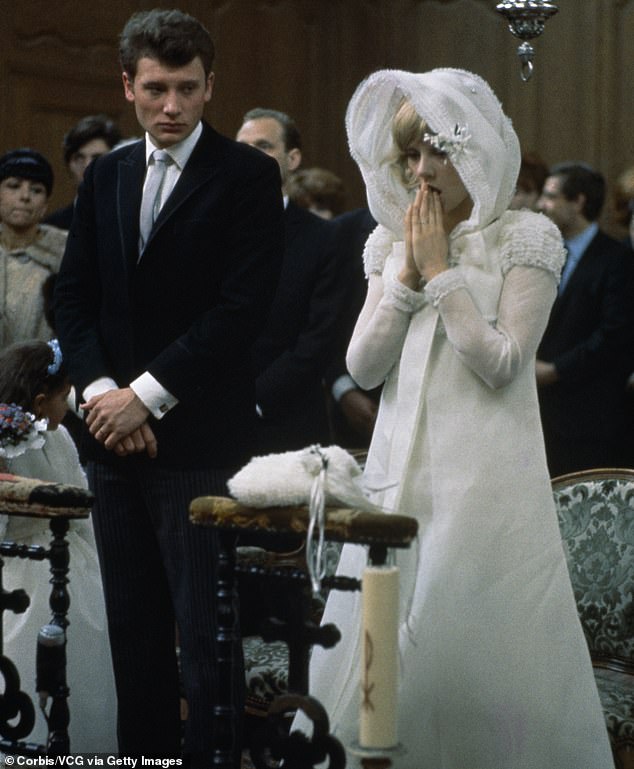 In spite of a penchant for booze and cocaine — in the 1960s, he counted Jim Morrison, Keith Richards and Jimi Hendrix as friends — he managed to keep trim.

On one occasion he took so much cocaine and drank so much alcohol on tour that he ended up playing Russian roulette with an American backing singer who had worked with the Rolling Stones and John Lennon.

‘My photographer found us in the room playing with a real bullet in the barrel,’ said Hallyday. Luckily, the photographer persuaded them to stop. Well into his 60s and 70s, Hallyday was still seducing adoring young women. Only colon cancer finally stopped him. 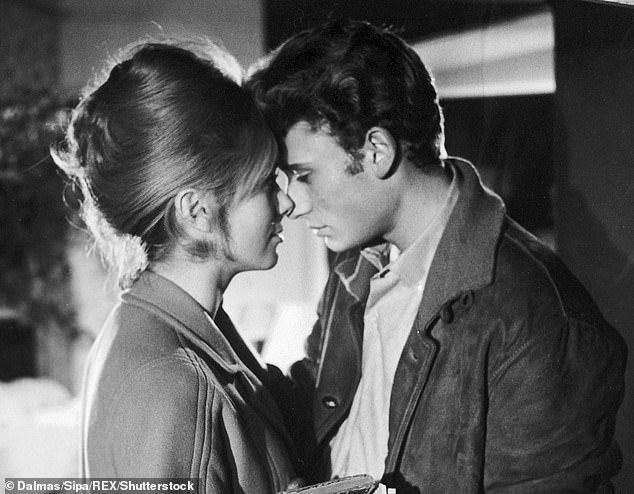 Since the early 1960s, when they met as teenagers, they conducted passionate and frequent liaisons without anyone in France — or anywhere else — having an inkling

The author of the new book in which the Deneuve revelations appear, Parisian journalist Gilles Lhote, was a close friend and confidant of Hallyday’s, well-acquainted with the details of the star’s prodigious sex life, maintaining an inventory of the lovers who succumbed to his charms.

‘If Mick Jagger had 4,000 mistresses, Johnny Hallyday was not far behind,’ he writes.

Hallyday himself was always proud of his loucheness, revelling in his status as one of France’s most accomplished roués. ‘I’ve been like that all my life,’ he once said. ‘Girls, girls, girls, girls . . . when I see a nice face, I see a nice body. Most of the time, it’s models, because they’re great-looking. Not much up there, but a lot down there.’ 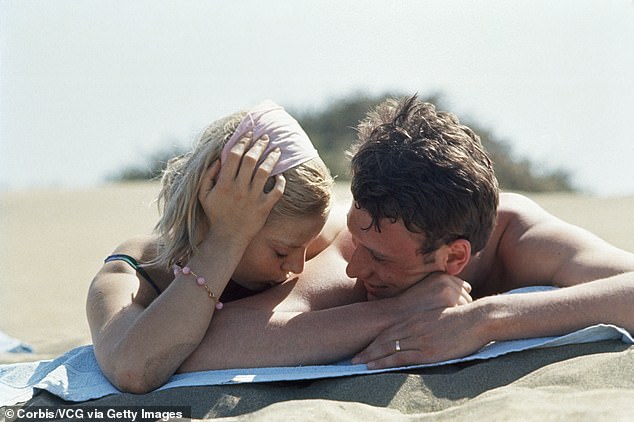 He continued to see Deneuve throughout the time he was married to Vartan (pictured left), often at actor Gerard Depardieu’s house

Ironically, his first single in March 1961 was entitled Laisse Les Filles: ‘Leave The Girls Alone.’ It was advice he spectacularly failed to follow.

Hallyday and Deneuve first met on the set of the film Les Parisiennes in 1961, when they were both just 18 and, according to Lhote, formed a ‘loving friendship’.

Hallyday revealed the true nature of that friendship in 1995, and subsequently gave Lhote his permission to reveal their affair after his death. (Deneuve, it appears, would have to deal with the resulting publicity without him.) 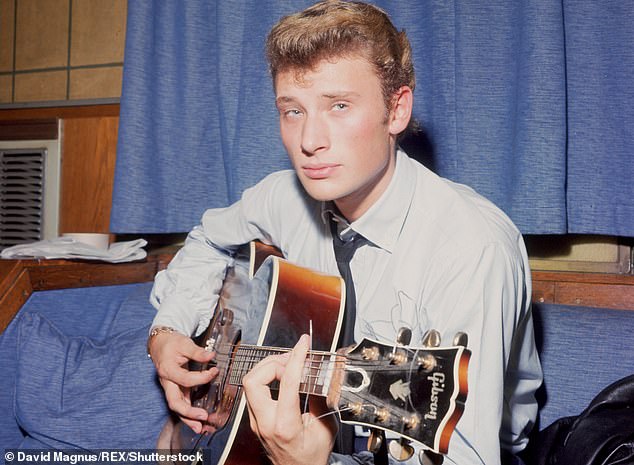 Born Jean-Philippe Léo Smet in 1943, he became a fantastically successful singer who sold 110 million records in the French-speaking world — but virtually none anywhere else

The singer’s interest in ever-younger women, many of them under age, continued during both his relationship with Deneuve and throughout his five marriages (two of them to the same woman). Yet he did say no at least once.

In the early 1960s, just before he met Deneuve, Hallyday had an encounter with Edith Piaf, almost 30 years his senior, whose star at the time was in decline.

She had succumbed to various addictions, and was very fragile. ‘I was sitting beside her and, in the middle of the meal, I felt her hand climbing up my thigh,’ Hallyday later recalled.

‘I hesitated. Then I left and ran away from there. I ran away from Piaf. I was almost a virgin at the time. I couldn’t see myself in bed with her. As far as I was concerned, she was an old woman. I was a minor at the time.’

By the mid-1960s, after national service in the French navy, he started a singing career. He struck gold very quickly, but his life soon careered out of control. Aided and abetted by pop star friends, by the early 1970s he was blowing chunks of his fortune on cocaine binges, women and fast cars, one of which, a Lamborghini, he wrote off while drunk and on drugs at 125mph. As with much of his life, he emerged unscathed.

His legendary thirst never left him: in 2010 French doctors were forced to place him in a medical coma after he entered hospital for a back operation and was denied alcohol for the first time in a long time (chronic alcoholics can die if their intake is suddenly stopped).

His domestic life was just as chaotic. Hallyday’s first marriage to Sylvie Vartan, with whom he had a son, ended in divorce in 1980. He continued to see Deneuve throughout this time, often at actor Gerard Depardieu’s house.

He then had a second marriage lasting just 65 days, before he embarked on a four-year relationship with actress Nathalie Baye, with whom he had a daughter.

In 2001, he was accused of rape by a young woman who claimed he forced himself upon her on his rented yacht in St Tropez, alleging that he had subjected her to a three-hour ordeal. 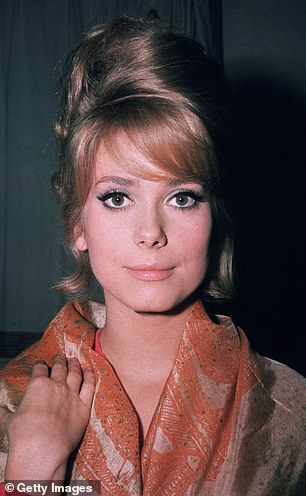 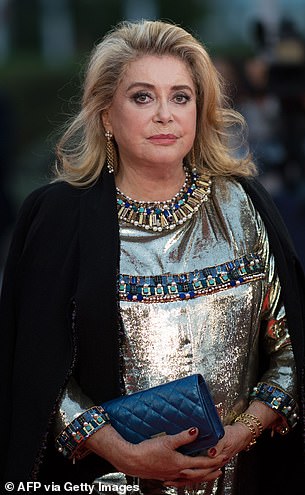 Ms Deneuve (left aged 18 and right last year), who is now 76, first met Hallyday on the set of the film Les Parisiennes in 1961 when they were both 18

The case was thrown out of court and Hallyday said at the time that the experience was akin to a ‘bad novel’.

Such was his standing in the eyes of the French public, the claims were barely reported in the French press. His final marriage, which was largely happy and lasted until his death, was to model Laeticia Boudou, who was 21 when they wed. Hallyday was more than 30 years her senior, yet the union lasted 21 years until his death.

Although Deneuve has not commented on the latest revelations, she effectively confirmed them in an article in Paris Match in 1993. ‘It is for me alone,’ she said, ‘that Johnny sings Quand Revient La Nuit (When The Night Returns).

He was buried on the Caribbean island of St Barts, where he had a home, though he also spent time in Gstaad, Switzerland, and anywhere else where the taxman might not trouble him.

After his death, Deneuve said: ‘I had a lot of affection for him. A little more than affection . . . .a real attachment.’

Intriguingly, she later became a controversial critic of the #MeToo movement, when she and 99 other prominent Frenchwomen wrote to a newspaper declaring men had the right to steal a kiss or send a salacious text.

It was, perhaps, an old-fashioned view — and one very much in keeping with her and Johnny’s secret and long-lasting affair.