I’m A Celeb 2021: Naughty Boy gets all ELEVEN stars as he is pelted with fish guts in trial… after threatening to leave the show for a second time

He’s had a turbulent first week on I’m A Celebrity… Get Me Out Of Here!

But Naughty Boy surpassed expectations as he took on his first solo trial, Creepy Closets, on Friday night and managed to scoop all 11 stars that were up for grabs.

The DJ, 36 had previously claimed his ‘time was up’ in the competition and gave the task his all after admitting he wanted to make his final night on the show ‘special’. 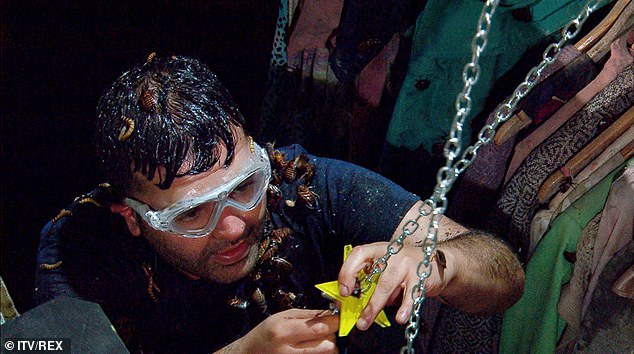 Impressive: Naughty Boy surpassed expectations as he took on his first solo trial, Creepy Closets on Friday night and managed to scoop all 11 stars up for grabs

Ant explained: ‘Behind us are six Creepy Closets hidden within them are 11 stars. Two minutes in each closet to find the stars. Once you get a star, pop it in your star bag.’

Dec hinted of impending critters: ‘Now, this is a Trial, so the chances are you won’t be alone in any of them.”

And as Naughty Boy started searching through the clothes for stars, he was pelted with slimy fish guts and offal. 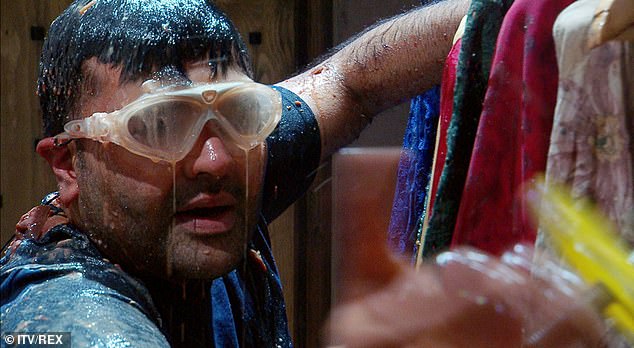 Arriving at the trial, Naughty Boy told Ant and Dec: ‘I’m actually pretty pumped. This is my first solo trial, I’m looking forward to it, focussed’… before being covered in fish guts

As he moved through the different areas, Naughty Boy was showered with various creepy crawlies.

With encouragement from Ant and Dec to move quicker, the musician raced through the rooms and bagged star after star while yelling in panic.

In the final room, Naughty Boy came face to face with a closet of corn snakes and very quickly found his tenth star.

In a heart-stopping finale, the celebrity then managed to scoop the eleventh and final star seconds before the klaxon sounded. 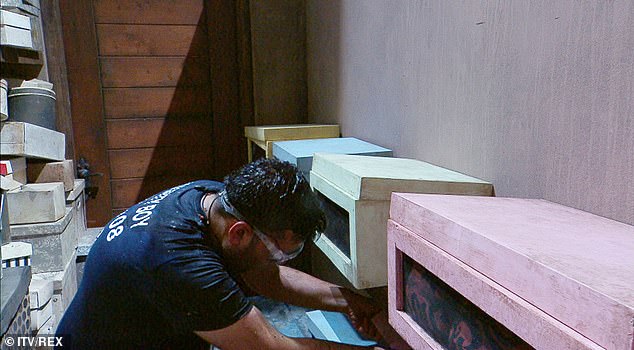 Hurry: With encouragement from Ant and Dec to move quicker, the musician raced through the rooms and bagged star after star as he went while yelling in panic 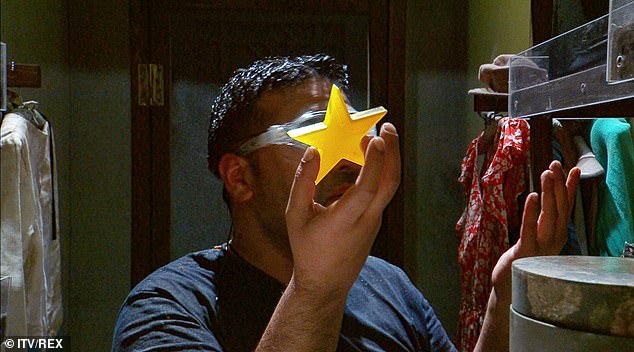 Woo! In a heart stopping finale, the celebrity then managed to scoop the eleventh and final star seconds before the klaxon sounded

Naughty Boy revealed to his campmates earlier that day that Friday would be his final night in the camp.

He told Snoochie, Matty and Danny: ‘I want to make tonight a special night, as I will be leaving in the morning.’

Snoochie asked in shock: ‘You will be? You’re leaving?’ to which Naughty Boy confirmed: ‘I just think my time here is done.’

Attempting to change his mind, Snoochie added:  ‘I feel like your journey’s only just begun. If I had handcuffs I’d chain you to a chair, but I don’t.’

Naughty Boy explained of his decision:  ‘At some point you do have to do what’s best for you.’ 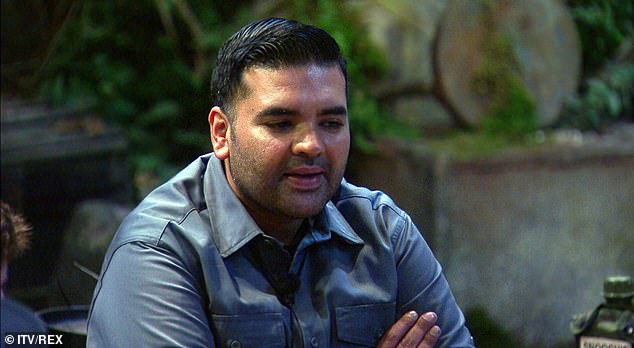 ‘You do have to do what’s best for you’: Naughty Boy made sure to go out with a bang as he revealed to his campmates earlier that day that Friday would be his final night in the camp

In the Telegraph, he added: ‘I’m still planning to leave tomorrow. I feel like my journey here in the camp has come to an end. I can’t go against my spirit.’

He told his campmates:  ‘I genuinely feel good about it. I don’t feel sad, I don’t feel like… I wouldn’t be leaving if I knew I haven’t challenged myself or overcome any fears because what’s the point of being here in the first place? 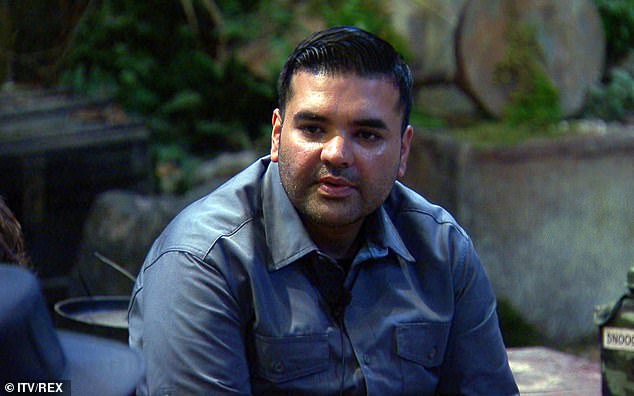 ‘I feel like my journey here in the camp has come to an end. I can’t go against my spirit,’ he said

But after the trial, Naughty Boy said: ‘I can’t wait to go in victorious. Full house! Who would have thought it?’

He said in the Telegraph: ‘The camp’s happy, I dedicated these stars to Richard because we miss him and we love him. I hope he sees this, I’m just gassed fully. The boy became a man.’

Adam said: ‘To see him [Naughty Boy] come back in, it was almost like he was floating on air. He was so happy with himself, you could see the confidence just rising up in him. That was a nice moment, a really nice moment.’

Danny asked him: ‘Are you going to stick around now? You’re not going anywhere are you?’ 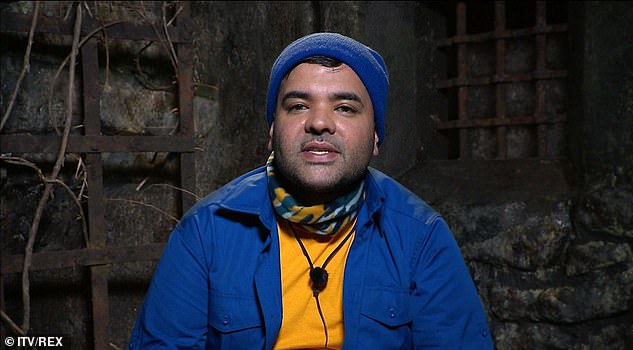 Fed up: It comes after Naughty Boy threatened to quit the competition altogether rather than join Main Camp earlier this week

It comes after Naughty Boy threatened to quit the competition for the first time rather than join Main Camp earlier this week.

He told his fellow campmates in The Clink: ‘I do think my time here is done. I had a feeling earlier and I was thinking about mum and obviously I love you guys.

‘I don’t think after knowing what the Main Camp probably knew what they were putting me through knowing I did the challenge earlier – I don’t know if I could ever join that camp.’ 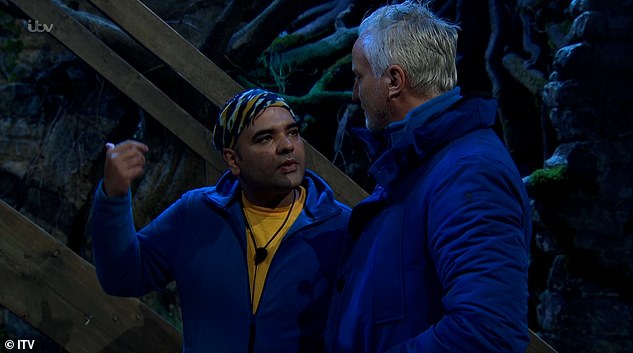 Done: He told his fellow campmates in The Clink: ‘I don’t know if I could ever join that camp.… there is no love’

‘This isn’t a random big decision… I’ve tried my best both times today. I just can’t go from here into that Main Camp… I can’t fake that. I’m sorry.

‘I can’t continue something that my heart’s not in anymore. I can’t suddenly join a camp who doesn’t give a s**t about us. Sorry, that’s the truth.’ 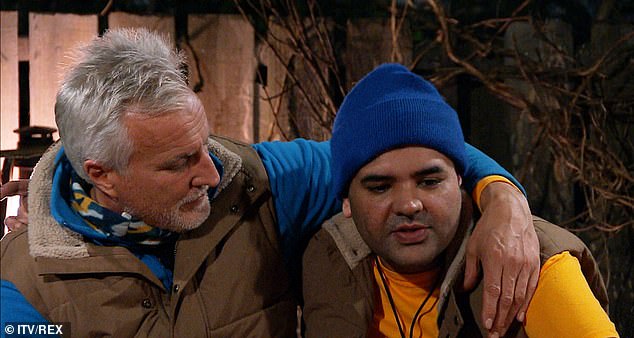 Feeling sad: He added: ‘I can’t continue something that my heart’s not in anymore. I can’t suddenly join a camp who doesn’t give a s**t about us. Sorry, that’s the truth’

BIGGEST MISCONCEPTION TO DISPEL IN THE CASTLE: It’s nice to be able to show the fun side of me rather than the serious news presenter.

PHOBIAS: The idea of small, enclosed spaces with cockroaches and spiders is horrific!

ROLE IN THE CAMP: I will give out hugs and make the food more edible!

MISS MOST: My comfortable bed and lovely bath.

DREAM CAMPER: Angelina Jolie and Daniel Craig – we wouldn’t have a problem getting stars if he were in the Castle.

BIGGEST MISCONCEPTION TO DISPEL IN THE CASTLE: People always see me as very composed and serious on the diving board. This will be a nice opportunity to let people get to know me better.

ROLE IN THE CAMP: I don’t mind helping out with cleaning.

MISS MOST: My bed!

BIGGEST MISCONCEPTION TO DISPEL IN THE CASTLE: People know me as a very bubbly person but when I am outside of my comfort zone, I can be shy.

ROLE IN THE CAMP: I love twerking on a Friday night and I’m going to teach everyone how to do it in the Castle!

MISS MOST: My cat and lip gloss.

BIGGEST MISCONCEPTION TO DISPEL IN THE CASTLE: Nothing. I don’t worry about what people think.

PHOBIAS: Heights. I’m not sure how I will feel if I have to walk across a plank very high up!

ROLE IN THE CAMP: Cook and interviewer. I love finding out about people’s lives.

MISS MOST: Aside from Judy and my family, not knowing what is happening in the news. I am a news junkie.

DREAM CAMPER:  The late Jimmy Greaves. I would have loved to chat about goal scoring in the Castle with him.

BIGGEST MISCONCEPTION TO DISPEL IN THE CASTLE: People don’t really know the real me at home and I’d like to show people the motherly side, the side my family sees.

PHOBIAS: I am hoping I will overcome my fears to take part in the Trials!

ROLE IN THE CAMP: Mum and to organise some fun dance routines!

MISS MOST: My notepad and pencil –I am known for always having to write down ideas.

DREAM CAMPER: Giovanna Fletcher –she is such a lovely, warm person.

BIGGEST MISCONCEPTION TO DISPEL IN THE CASTLE: People don’t know the real me and I want everyone to get to know me.

PHOBIAS: Confined spaces and heights but I want to give the Trials a go to bring back some stars.

ROLE IN THE CAMP: Castle chef and someone who everyone can confide in.

MISS MOST: My mum. I live with her and it’s going to be hard being away from her.

BIGGEST MISCONCEPTION TO DISPEL IN THE CASTLE: Great to be able to show people with all disabilities they can try different things in life.

ROLE IN THE CAMP: Chef – so long as there isn’t too much pressure to make the food interesting!

MISS MOST: TikTok, my mum and dog.

BIGGEST MISCONCEPTION TO DISPEL IN THE CASTLE: None because I never hide behind a false image. What you see is what you get.

PHOBIAS: I am going to tell you when I am in the Castle!

ROLE IN THE CAMP: Chef. I enjoy cooking at home and I will be hoping to add some garlic and rosemary to the food.

MISS MOST: My partner and my little girl. It’s going to be tough.

CLAIM TO FAME: The Saturdays star

BIGGEST MISCONCEPTION TO DISPEL IN THE CASTLE: People think if you are in a pop group, you lead a glamorous lifestyle and won’t get stuck in, but I’m determined to muck in with all the chores.

ROLE IN THE CAMP: The serial hugger.

MISS MOST: Wayne and my boys.

BIGGEST MISCONCEPTION TO DISPEL IN THE CASTLE: None but I would like to show everyone what I am like in real life rather than my soap character, Aaron Dingle.

PHOBIAS: I am absolutely dreading the eating Trials! I fear I will gag!

ROLE IN THE CAMP: A shoulder to cry on and a person everyone can come to if they have a problem.

MISS MOST: My fiancée, Steph, and our new baby.

DREAM CAMPER:  Fred Sirieix or any ex football player. I won’t be able to leave them alone asking lots of questions!