EXCLUSIVE: Model Delilah Belle Hamlin SPLITS from Love Island star Eyal Booker following two-year romance because ‘it was important to her that 2022 is a fresh start’

A source told MailOnline the couple’s shock breakup was amicable, and Delilah, who’s the daughter of The Real Housewives of Beverly Hills star Lisa Rinna, 58, and Hollywood actor Harry Hamlin, 70, is in a ‘happy and good place.’ 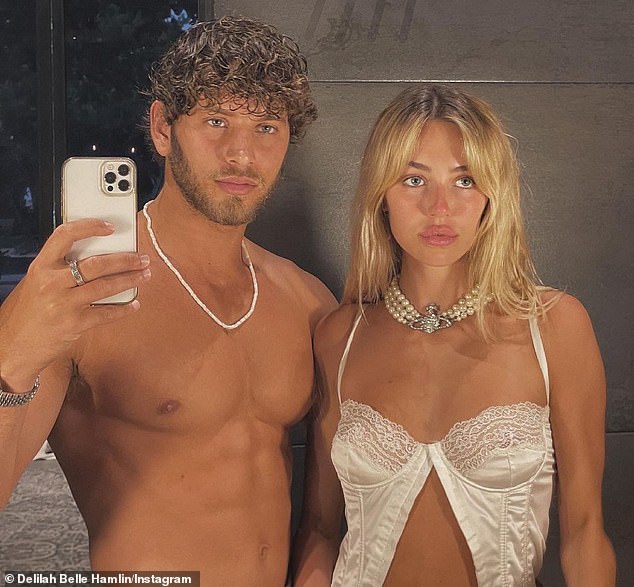 An insider said: ‘Delilah ended her relationship with Eyal before New Year’s Eve. It was important to her that 2022 could be a fresh start and right now she wants to be single and focus on her career.

‘Last year, she experienced some difficult times, but she’s come out the other side stronger than ever and is happy, enjoying time with friends and family, as well as looking positivity to the future.’

During their two-year relationship, Delilah and Eyal, who rose to fame on UK’s Love Island in 2018, split their time between London and Los Angeles.

Delilah watched Eyal on the ITV2 series and direct messaged him on Instagram, before the pair went official at Coachella festival in 2019.

MailOnline has contacted Delilah and Eyal’s representatives for comment. 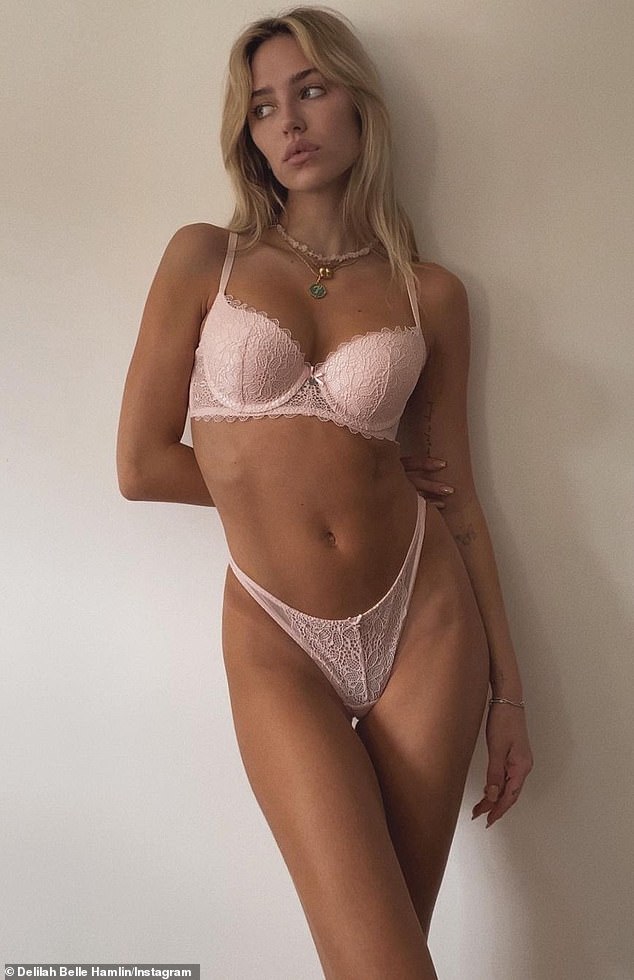 Stunner: The US star, who started dating Eyal in 2019, called time on their relationship before New Year’s Eve so she could begin 2022 with a fresh start

Kardashian star Scott Disick, 38, shocked fans in 2020 by sending Love Island’s Megan Barton-Hanson, 27, a DM demanding that she apologised to Eyal for the way she treated him on the dating series.

Megan said she was left ‘speechless’ after receiving the message from Scott, who was dating Delilah’s younger sister, Amelia, 20, at the time.

Scott said: ‘I was recently introduced to a beautiful man named Eyal. When I went to see what he’s done on TV, I was astonished by your behaviour.

‘To find you mugging him off and taking full advantage of his unbelievably beautiful sense of humour and vulnerability, I’m extremely disturbed that anybody could be so disrespectful to somebody for no good reason.’ 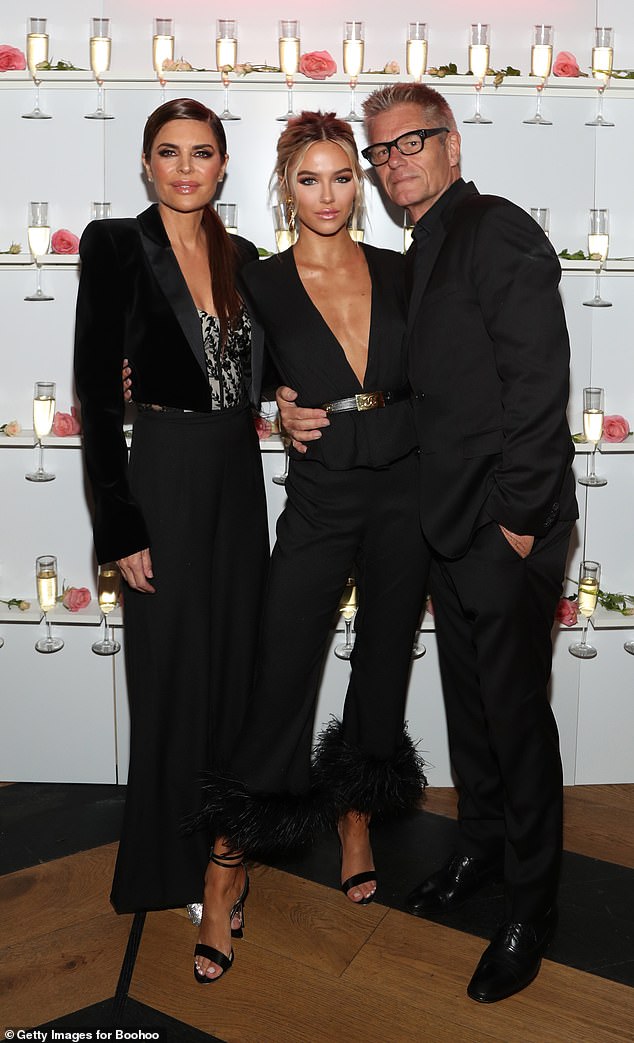 Famous family: Delilah is the daughter of The Real Housewives of Beverly Hills star Lisa Rinna and Hollywood actor Harry Hamlin (pictured in May 2019)

Eyal previously revealed his concerns over the couple having a long distanced relationship.

In 2020, he admitted: ‘Covid was going to either make or break mine and Delilah’s relationship.

‘And we weren’t always sure if we would be able to see each other and spend time with each other but somehow we managed to get through it, make it work and come out even stronger.’

‘Covid is not over yet, but we’ve made it this far and that’s pretty special to me considering at the beginning we weren’t sure how we would navigate through it.’ 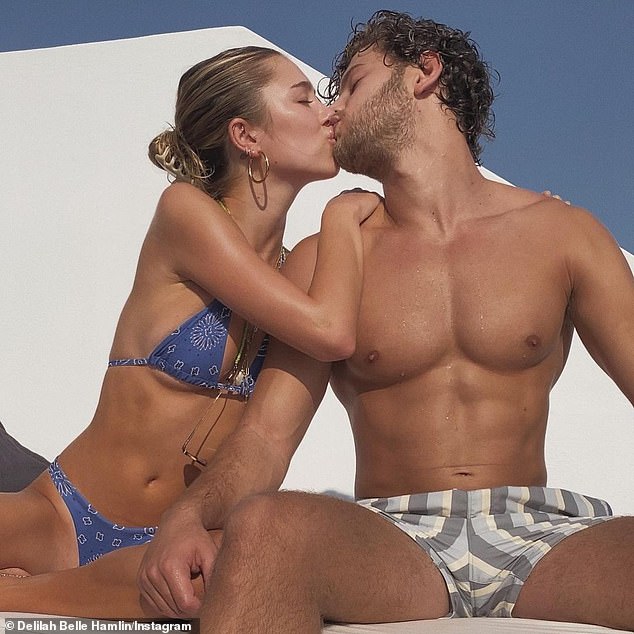 Moving on: A source told MailOnline the couple’s breakup was amicable, and Delilah is in a ‘good place’ after telling her followers in November she suffered from an accidental overdose

Delilah hoped to start 2022 with a fresh outlook after revealing in November that she had been hospitalised following an accidental drugs overdose.

After having her second Covid vaccination, Delilah suffered a panic attack, and she became unwell when the jab prompted an autoimmune disease reaction in her body.

As a result of the trauma, she started to struggle with panic attacks, OCD, and anxiety, which was made worse by her phobia of vomit that stems from childhood.

She was then diagnosed with several illnesses including Lyme disease, causing her to be on multiple antibiotics and supplements but her panic attacks became so worrying that she needed the help of a psychiatrist. 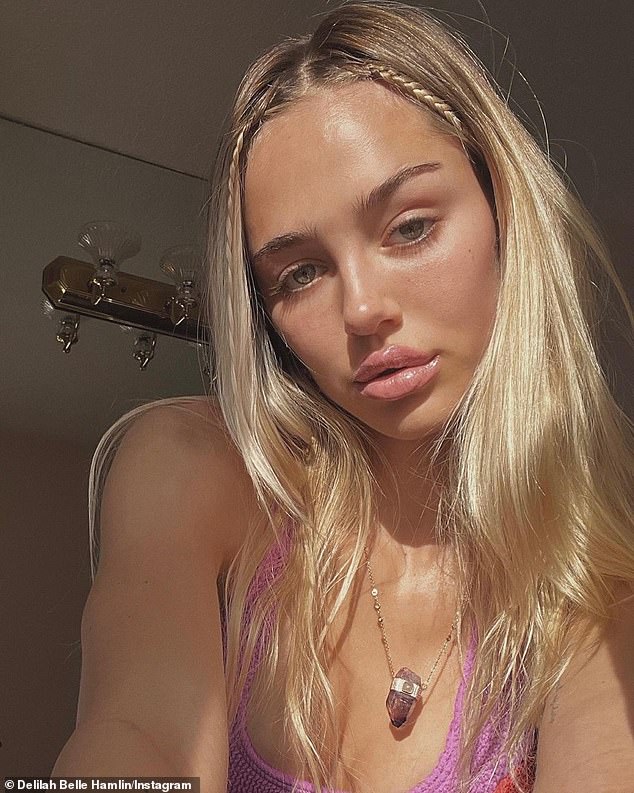 ‘You broke me’: Delilah’s ‘transformative year’ started after she had a negative reaction to the Covid vaccine, which eventually caused her to have worrying panic and anxiety attacks

Delilah explained: ‘I found a psychiatrist and he overprescribed me.

‘He overprescribed me with one medication that one of my friends takes like 10 milligrams, and he gave me like 20 milligrams three times a day and then he gave me 3 milligrams of Xanax a day, so my body got dependant on Xanax number 1 and number 2 I overdosed.

‘I didn’t mean to at all. I overdosed on this on this one medication called Propranolol and I took Benadryl with it and for some reason, I ended up in the hospital.’

In December, Delilah reflected on 2021, telling her 1.7million Instagram followers: ‘2021, you changed my life. You broke me. But thank you for pushing me to do things I would have never been able to do.

‘Thank you for showing me disease so I could be at ease instead. What a transformative year it had been.’ 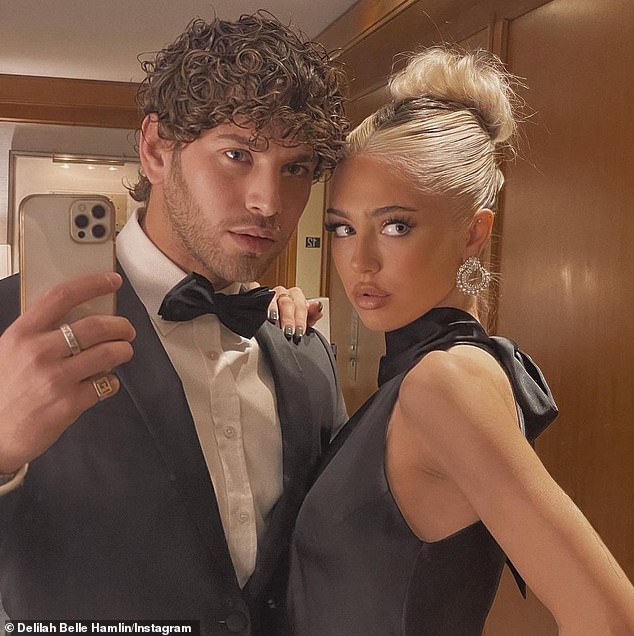 Throwback: The couple met in 2019 after Delilah watched Eyal on Love Island and messaged him privately on Instagram, with the pair at first embarking on a long distanced relationship