She’s been adjusting to parenthood ever since welcoming her first child, daughter Sienna Grace, with husband Hugo Taylor, five weeks ago.

And Millie Mackintosh joked she’s become a ‘milkmaid’  in a tongue-in-cheek post shared to Instagram on Tuesday.

The former Made In Chelsea star, 30, looked every inch the yummy mummy in a frilly dress by Dôen as she quipped: ‘You know when you subconsciously dress the part? #milkmaid #postpartum #gotmilk.’ 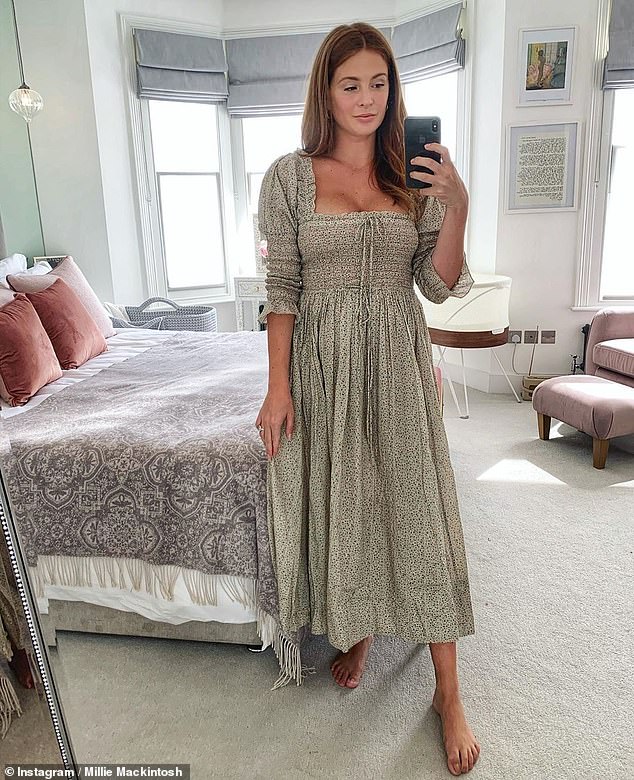 ‘When you subconsciously dress the part!’ Millie Mackintosh joked she’s become a milkmaid in a cheeky post shared to Instagram on Tuesday

Catching the eye, the socialite put on a busty display in the ensemble which featured puffy shoulder pads and a squared neckline.

The TV star complemented her naturally radiant beauty with minimal make-up, while styled her tresses in a straight fashion.

Earlier this week, Millie introduced her little girl to the world as she gushed that she and former Made In Chelsea co-star Hugo, 34, are ‘on cloud nine’ since becoming parents for the first time.

Millie told how grateful she was to have her husband of almost two years present for the birth amid the coronavirus pandemic, which has caused most hospitals in the UK to allow only one birthing partner. 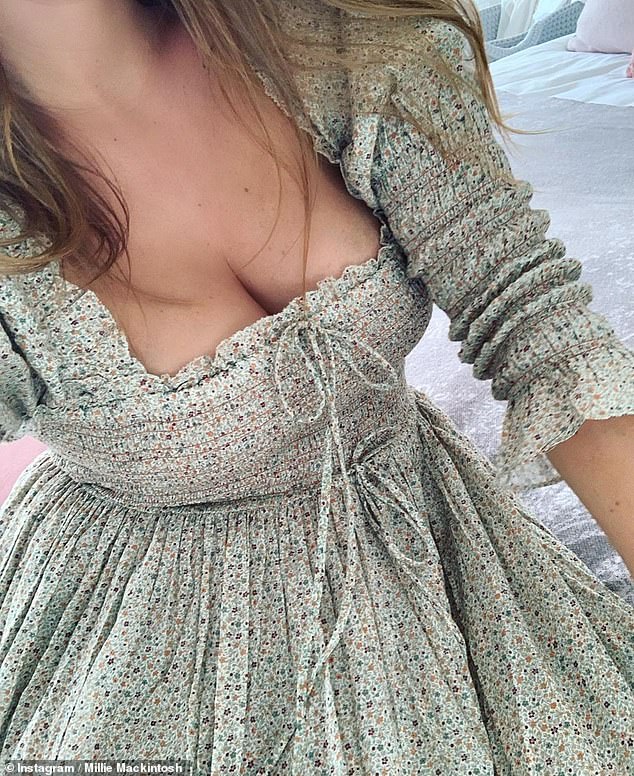 Busty display: The former Made In Chelsea star, 30, looked every inch the yummy mummy in a frilly dress by Dôen 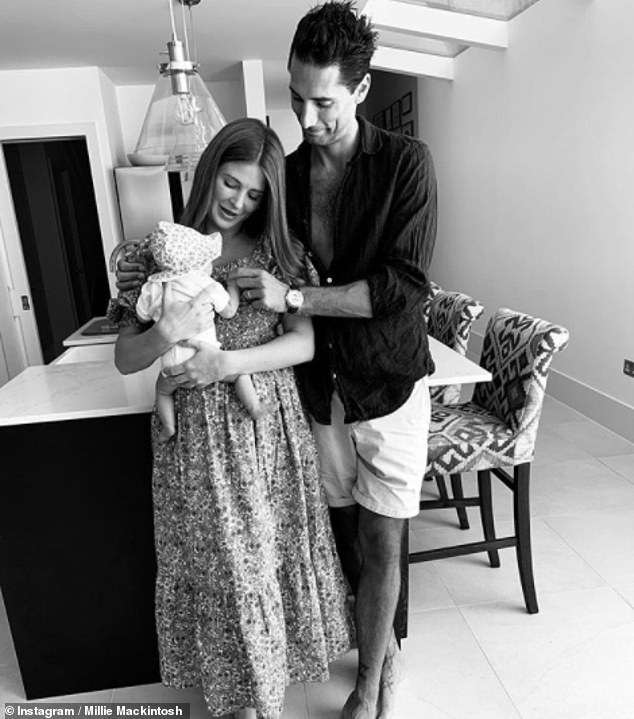 Family-of-three: Earlier this week, Millie introduced her little girl to the world as she gushed she’s ‘on cloud nine’ and praised Hugo, 34, for being present during labour

In this week’s Hello! magazine, the beauty revealed the couple settled on Sienna Grace’s name ‘months’ before she arrived, adding: ‘We’ve been on cloud nine; it’s gone so quickly.

‘We’ve been in our little love bubble at home, cherishing those newborn moments, whether that’s her sleeping on me or just lapping up all the cuteness.’

‘Time has gone so quickly. She is so adorable, even down to the little noises she makes.’

Hugo added: ‘Sienna has turned our world upside down. It’s like first love all over again – that wondrous feeling of excitement, joy and endless possibility for the future. I can’t wait to watch her grow.’

Millie also revealed that Sienna was born via Caesarean section, which was planned after the couple found out at 28 weeks that she was in the breech position. 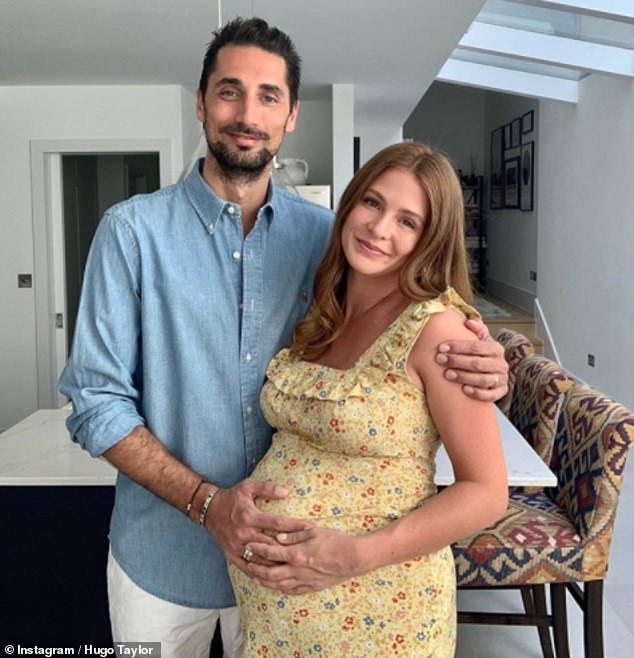 Parents: Last month, the London native announced her daughter’s arrival as they wrote in a statement: ‘We are delighted to announce the arrival of our darling girl (pictured in April)

Millie and Hugo announced Sienna’s arrival on May 1 in a statement, reading: ‘We are delighted to announce the arrival of our darling girl who arrived on Friday 1 May at 1:21pm, weighing a very healthy seven pounds.

‘We are eternally grateful to the doctors, nurses and midwives for taking such good care of us. Mum and baby are both doing incredibly well and we are looking forward to bringing our daughter home and spending time together as a family.’

The couple tied the knot in June 2018 at Hugo’s uncle’s country estate, Whithurst Park in West Sussex, one year after he proposed during a holiday to the Greek island of Mykonos.

The pair briefly dated during their Made In Chelsea days back in 2011 and reunited in May 2016 shortly after Millie’s split from her first husband, rapper Professor Green, 36.

Millie was married to the musician, real name Stephen Manderson, for two-and-a-half years before they announced their split in February 2016. 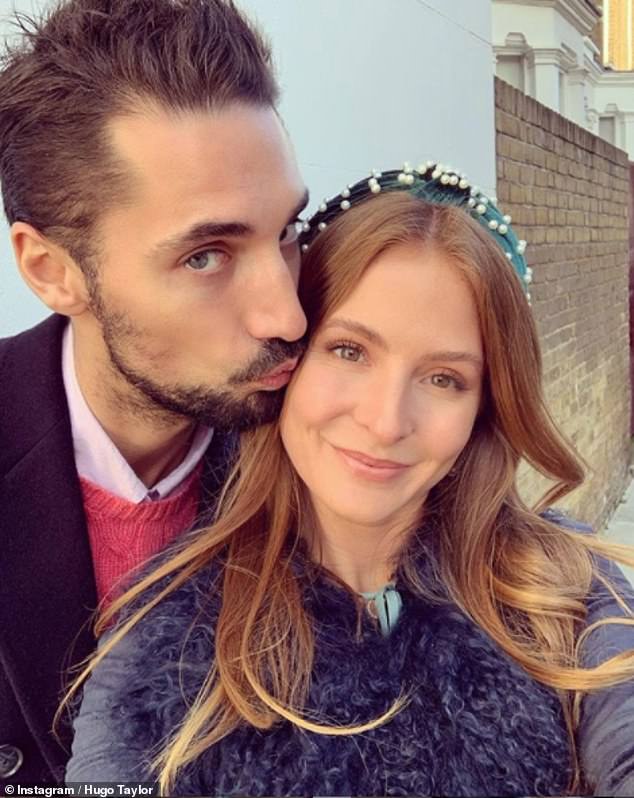