Millie Mackintosh has revealed she has given birth to her first child with husband Hugo Taylor.

The Made In Chelsea star, 30, announced the news on Friday to Hello! Magazine, as they said: ‘We are delighted to announce the arrival of our darling girl who arrived on Friday 1 May at 1:21pm, weighing a very healthy seven pounds.

‘We are eternally grateful to the doctors, nurses and midwives for taking such good care of us. Mum and baby are both doing incredibly well and we are looking forward to bringing our daughter home and spending time together as a family.’ 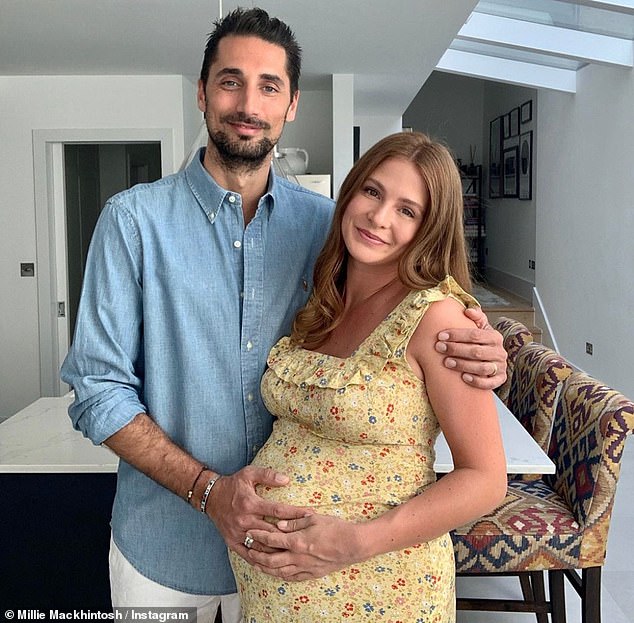 Happy news: Millie Mackintosh, 30, has revealed she has given birth to her first child with husband Hugo Taylor, 33

The reality star has kept followers up to date on her pregnancy journey for several months on Instagram. Millie previously admitted that her body was ‘starting to feel the strain’ of carrying her baby around as she entered the third trimester.

She wrote: ‘Pregnancy update – Entering the third trimester and oh boy is my body starting to feel the strain of carrying this precious baby around.

‘My feet are aching so much I can only wear slippers or trainers. Hugo even suggested crocs to wear around the house! (not sure I’m there just yet!).

‘The heart burn is pretty constant and I’m REALLY struggling with sleep (3am wake up calls are no fun), it’s just so hard to get comfortable! 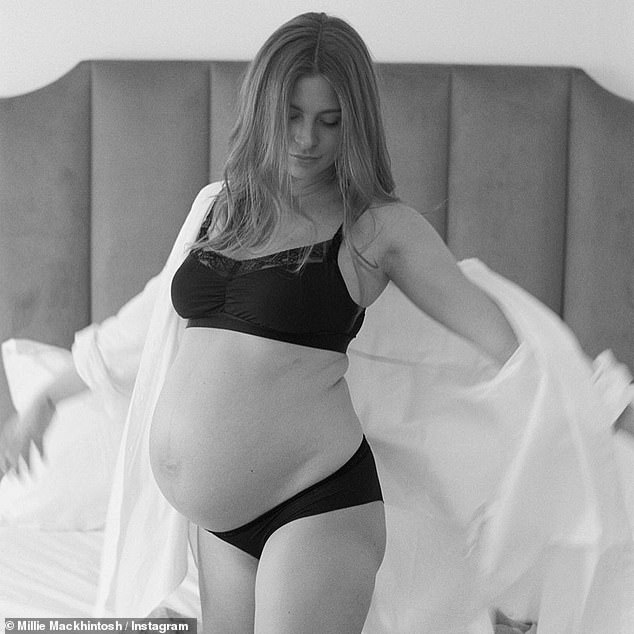 Radiant: The Made In Chelsea star, 30, announced the news on Friday to Hello! in a touching statement released less than two hours after the baby was born

‘More recently I’ve been experiencing a flare up of pelvic girdle pain which makes it painful to walk sometimes…..???? No wonder I’ve been feeling super emotional.’ (sic)

Millie told her Instagram followers she was trying to keep moving, while enjoying plenty of ‘down time’ and reminding herself to put her feet up ahead of the arrival of her baby girl with husband Hugo in May.

She added: ‘I’m aware it’s important to keep moving in your third trimester so I have my physio advising on my exercise, as movement will make me feel better both physically, mentally and emotionally. 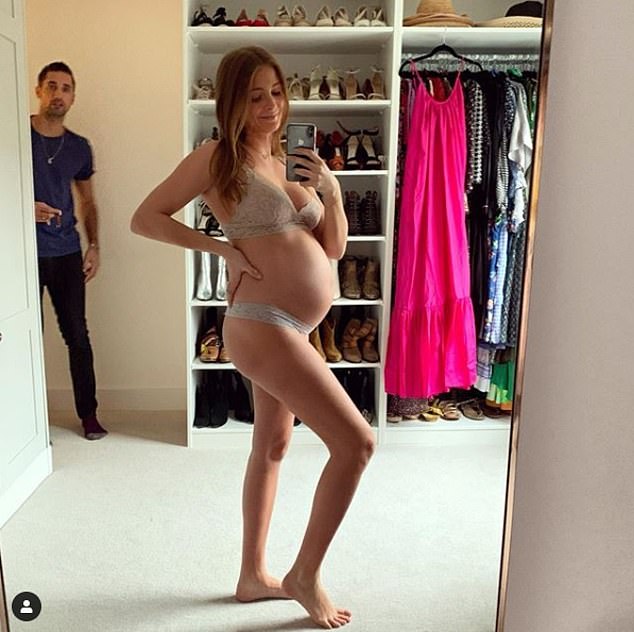 Changes: Millie previously admitted that her body was ‘starting to feel the strain’ of carrying her baby around as she entered the third trimester

‘With a gentle routine of swimming, Pilates and specially adapted exercises from @bodybysimone hopefully will elevate some of the symptoms.

‘More importantly I have to remind myself to allow plenty of down time, putting my feet up and focusing on enjoying the last few months before we meet our baby girl! The excitement is just too much!

‘If anyone has any tips on how to manage pelvic girdle pain, it would be hugely appreciated! #28weekspregnant #thirdtrimester.’ (sic) 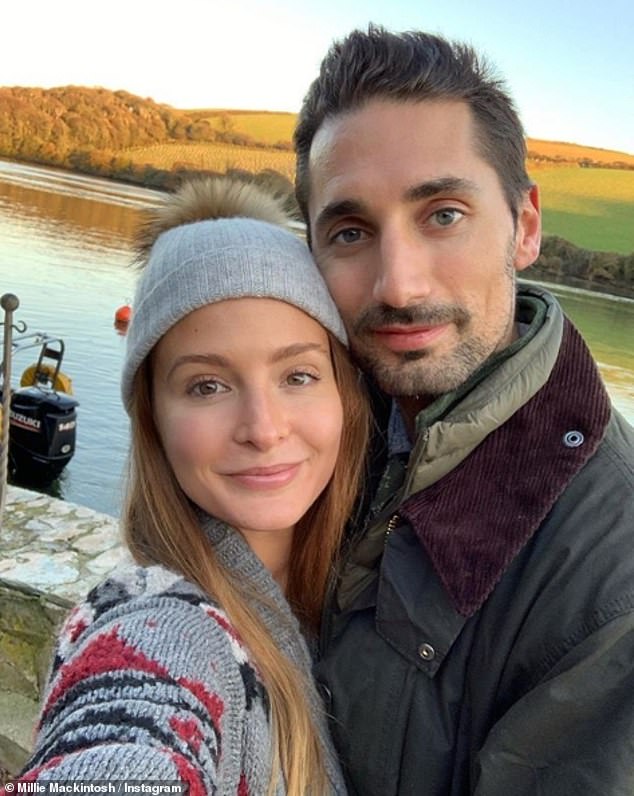 Romance: Millie and husband Hugo tied the knot in June 2018 one year after he proposed

The former fashion designer also recently discussed her ‘dwindling’ self confidence as she adapted to the changes her body underwent during pregnancy.

Writing on Instagram in January, Millie said: ‘As my bump gets bigger I am in total awe of what my body is capable of. It’s a wonderful feeling to know that you’re sharing your space with such precious cargo.

‘However that doesn’t mean that I haven’t had days/weeks where I felt my self confidence slowly dwindling! I particularly found the transitioning weeks from 1st trimester into the second most difficult. 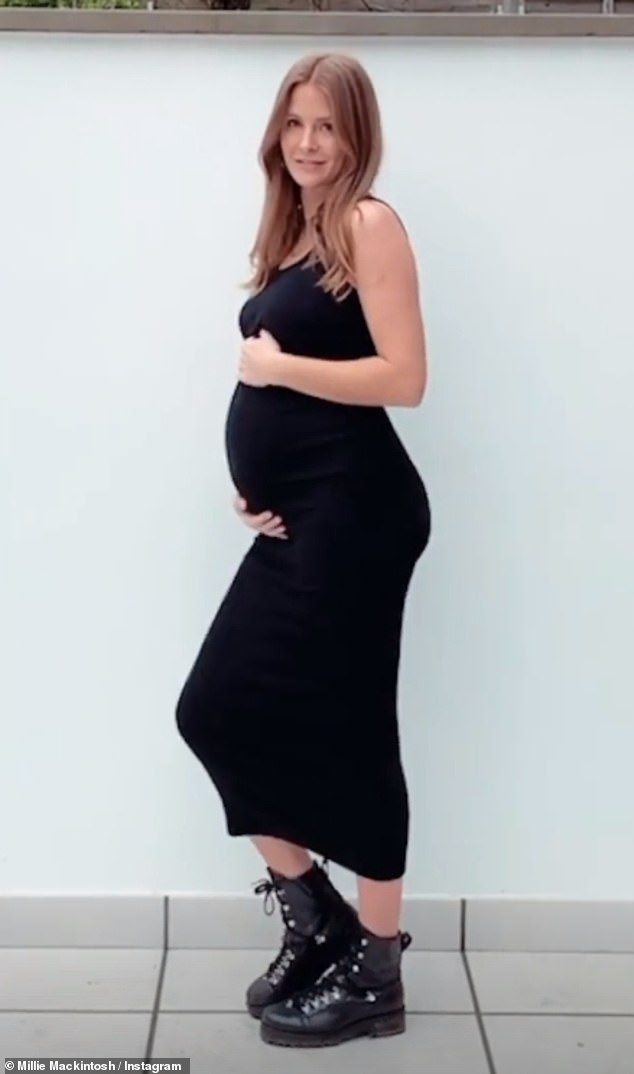 Millie wrote: ‘My feet are aching so much I can only wear slippers or trainers. Hugo even suggested crocs to wear around the house! (not sure I’m there just yet!)’

‘I was unsure of my body and its new found shape. It’s like being an awkward teenager again, figuring out what styles suit your ever evolving silhouette.’

She continued: ‘To say I have loved every second of watching my body expand wouldn’t be honest, it has been a real transition and at times scary as I haven’t felt like me.

‘But today was a good day! I put on a cute dress (stretchy knit of course) and headed out the door for meetings with confidence and pride of my bump! Tomorrow who knows……. taking each day as it comes!’

The reality star also detailed her battle with ‘severe anxiety, vomiting and mood swings’ in an emotional social media post about her ‘rollercoaster’ pregnancy journey to date.

Writing on her Instagram page in December, she said: ‘My pregnancy journey so far… I’m not going to lie it’s been a bit of an emotional rollercoaster. 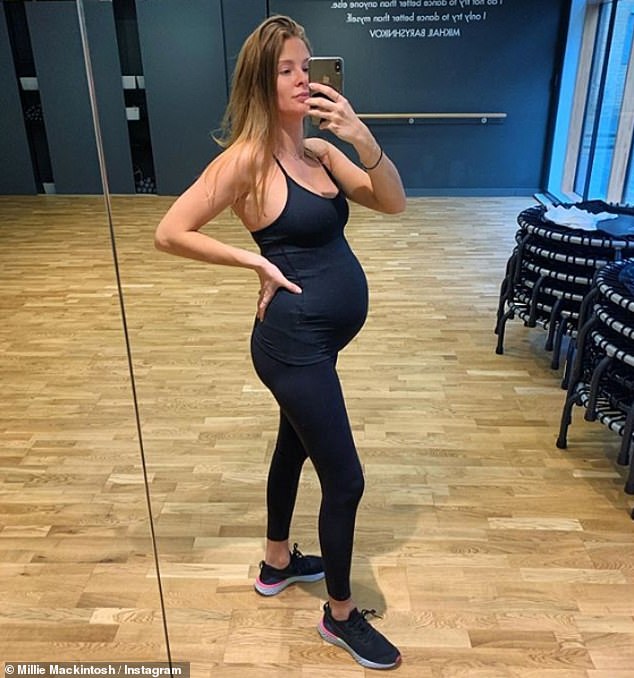 Relaxation: Millie told her Instagram followers she was trying to keep moving, while enjoying plenty of ‘down time’

‘Bursting into tears for no apparent reason has become a weekly occurrence (sorry Hugo!) coupled with nausea, vomiting (not just in the morning – the evening sickness was worse for me)…

Millie told her followers she was finding it difficult to keep her mental health in check amid fears surrounding the birth of her baby girl and how she will ‘cope’ when the little one arrived.

She added: ‘Trying to keep on top of my mental health is proving a little trickier than usual. I’m still practicing mindfulness and daily meditation (as I normally would) but have had moments of severe anxiety on multiple occasions. 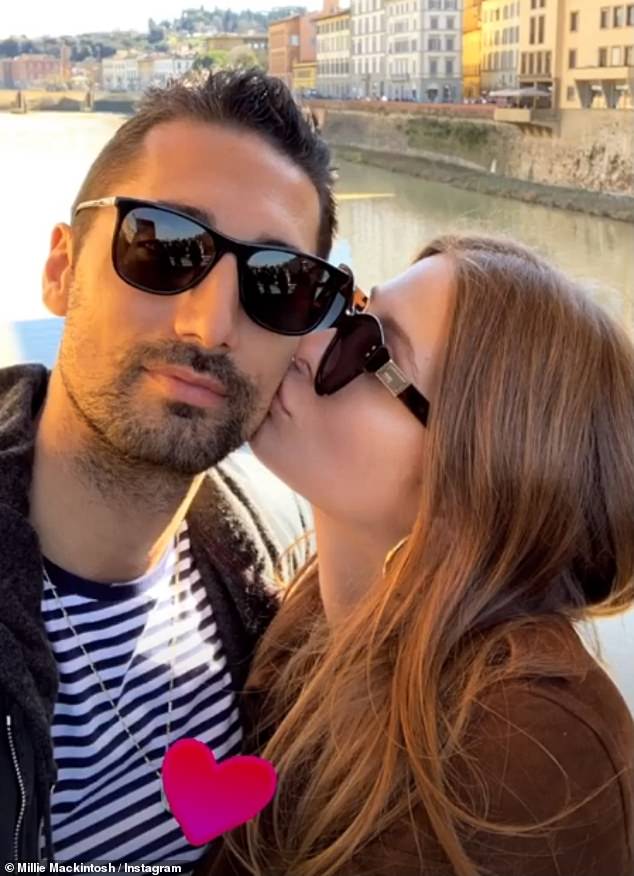 Honest: Millie discussed her ‘dwindling’ self confidence as she adapted to the changes her body underwent during pregnancy (pictured with Hugo)

‘I have found over the last few months that I have unexplainable (sic) fear which constantly switches from ‘something is wrong with the baby’ to ‘how I will cope when the baby arrives?’ and don’t get me started on the BIRTH!

‘I’m sure all new mums go through this and I am no different but would be great to hear from any of you who have been through similar things or have any suggestions on how to lessen these worries.’

Millie and Hugo tied the knot in June 2018 at his uncle’s country estate, Whithurst Park in West Sussex, one year after he proposed during a holiday to the Greek island of Mykonos.

The couple briefly dated during their Made In Chelsea days back in 2011 and reunited in May 2016 shortly after Millie’s split from her first husband, rapper Professor Green, 36.

Millie was married to the musician, real name Stephen Manderson, for two-and-a-half years before they announced their split in February 2016. 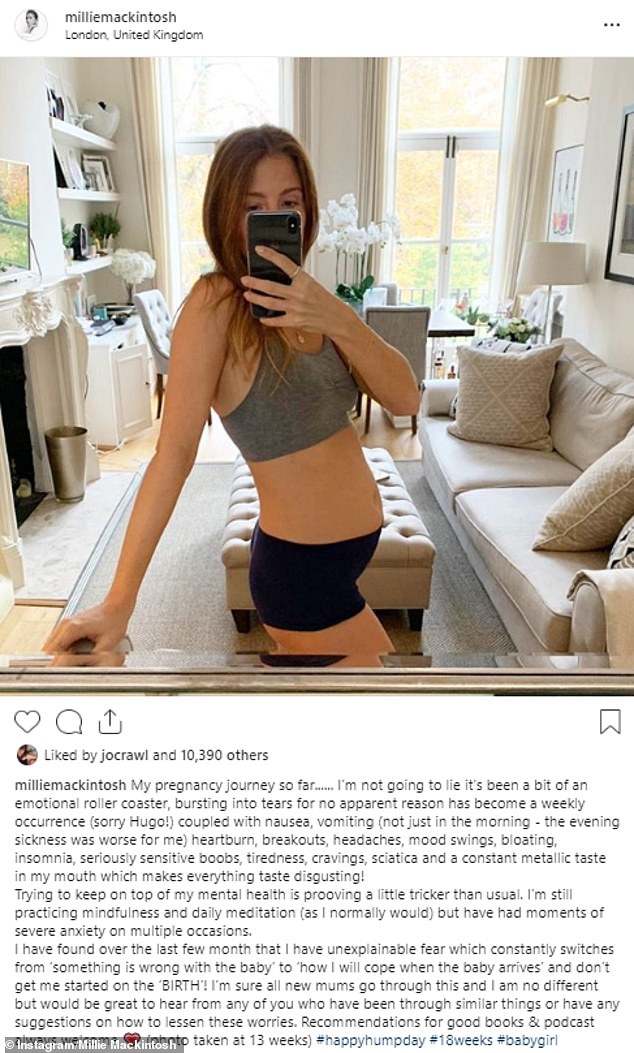 Tough: Millie admitted her journey to motherhood has been ‘a bit of an emotional rollercoaster’ so far as she detailed her battle with ‘severe anxiety’