Michelle Pfeiffer says she broke her arm while getting out of the bathtub while in her hotel room.

The 61-year-old revealed that she was getting out of the bath when she slipped on wet marble floor during her press tour for her latest movie, Maleficent: Mistress of Evil.

‘I was at the hotel and I got out (of the bath) and I saw really slippery marble floors … and I said to myself, ‘Self, slippery floor, be careful…’ she said while speaking with Extra about the accident. 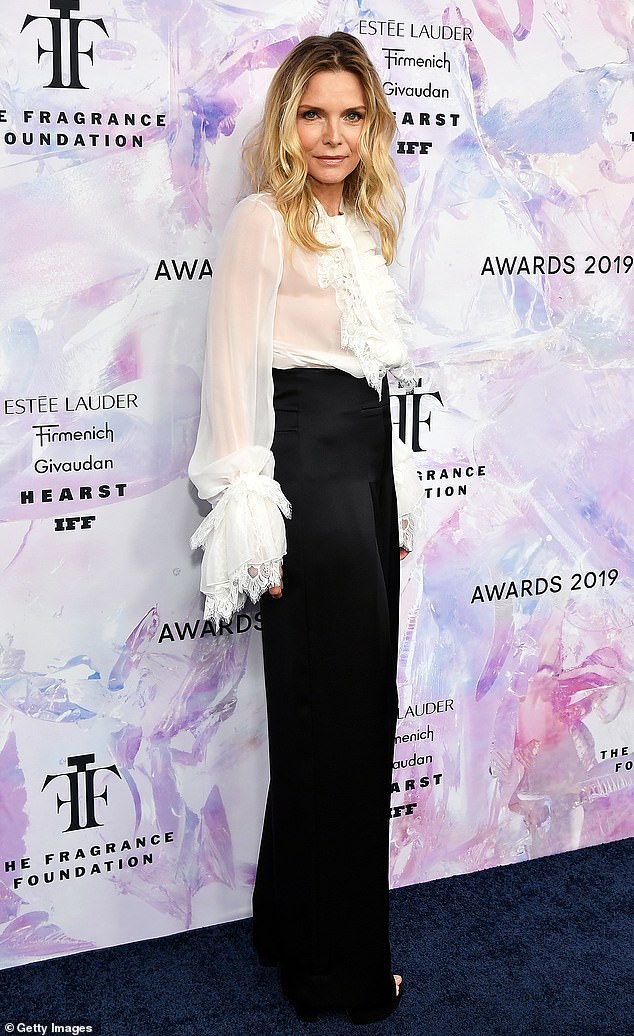 Stunning: Michelle Pfeiffer revealed while on her press tour for her new movie that she broke her arm while getting out of the bathtub in her hotel. She is pictured above at the 2019 Fragrance Foundation Awards back in June in New York City 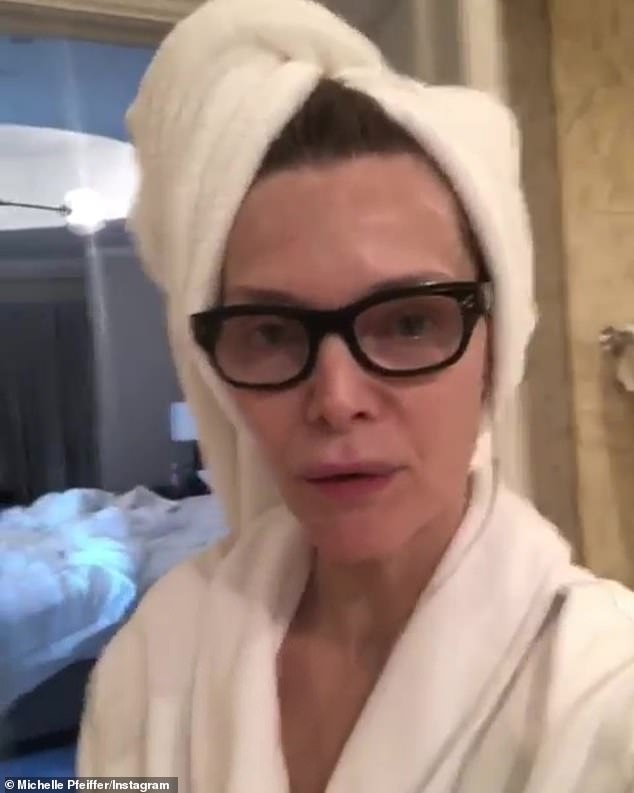 Being  careful: Michelle revealed she told herself that the floor was wet and to be careful, but the fall happened anyway

In the movie, she stars alongside Angelina Jolie, 44, and Elle Fanning who plays Princess Aurora.

Pfeiffer plays Queen Ingrith and revealed she had a lot of fun while on set filming the movie: ‘We laughed a lot. [I’d say to Angelina], ‘You’re in horns.’

‘Michelle Pfeiffer is yelling at me. And I’m a giant fairy.’ Jolie said during the same interview. ”It became a whole new experience for me. It’s always nice when you’re with actors you respect and you get to play and you have something you get to chew up a little bit together.’ 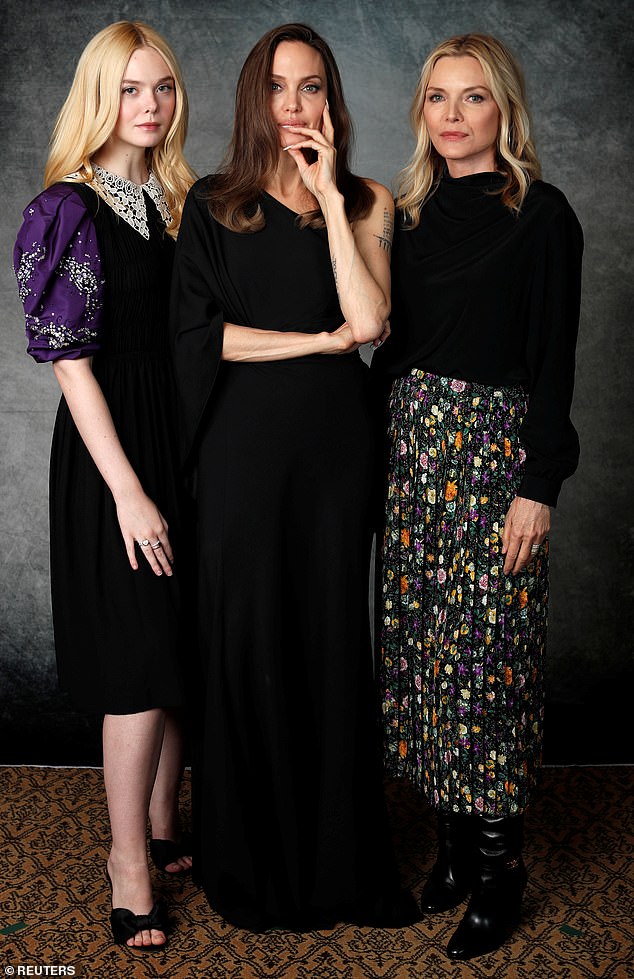 Costars: Michelle poses with her two famous costars Elle Fanning and Angelina Jolie over the weekend as they continue on with their press tour for their new movie 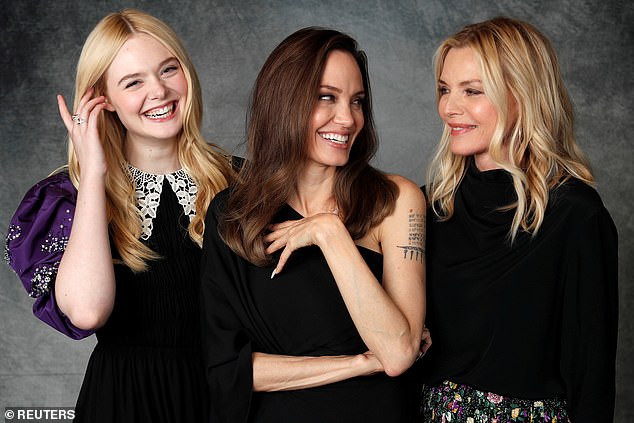 Having fun: The three woman share a laugh as they pose for their portrait for the Maleficent film that hits theaters on October 18

The three women recently reminisced on their first day working together back in 2012 for the first Maleficent movie.

Fanning had just turned 14 years old at the time – she just turned 21 in April – and Jolie had some kind words to share about her costar saying: ‘When we met at 14, you were young but you were always impressive,’ Jolie shared. ‘I’m very proud. She always held herself so well and she always had such grace and she’s such a strong actor that you never seemed like a child,’ she said while speaking with ET.

‘You’ve also maintained — which I think is almost unheard of in this business — such sweetness and gratitude for the job and for every minute and for everybody.’ 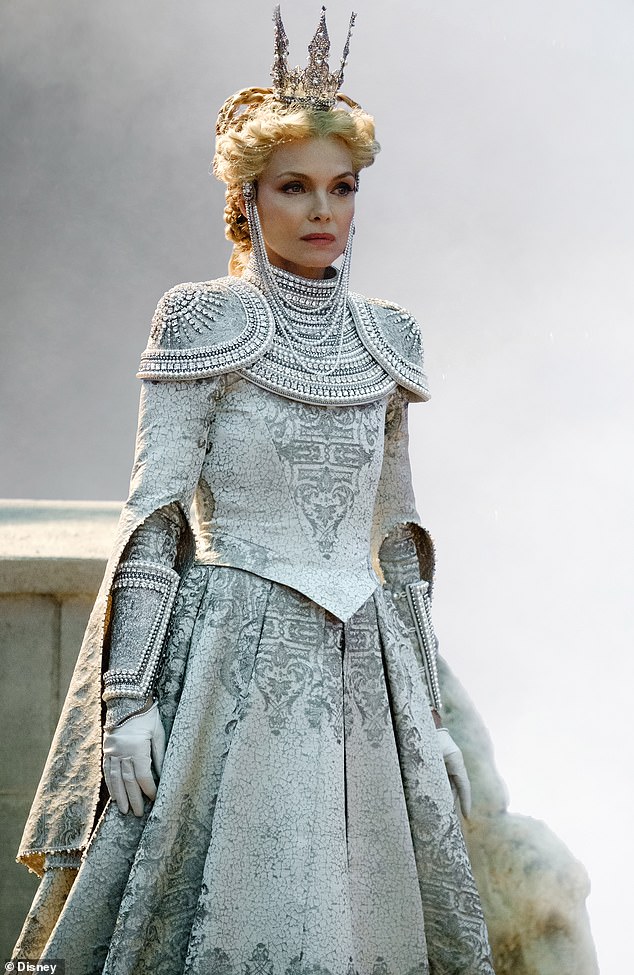 In character: Michelle Pfeiffer plays Queen Ingrith in the new movie Maleficent: Mistress of Evil. She is pictured above in character wearing her extravagant gown and crown

With Pfeiffer’s press tour coming to a close when the movie hits theaters on October 18 she will be heading back into a new kind of character rather quickly.

The blonde bombshell is set to star in the new movie, French Exit alongside Lucas Hedges.

Production will take place in Montreal and Paris and is based off of Patrick deWitt’s famous novel.