‘My GP says I’ll need a reconstruction’: Michelle Heaton reveals her breast implants may have ruptured and she is ‘patiently’ waiting to see an NHS specialist – 10 years after mastectomy

The Liberty X star, 42, took to Instagram on Friday to share a lengthy post explaining that people had messaged her after she featured in a magazine shoot, and they noticed their different appearance.

It comes after Michelle, who is newly in recovery for drink and drug addiction, had a double mastectomy and reconstruction 10 years ago due an 85 per cent risk of getting breast cancer in her 30s due to the BRCA gene. 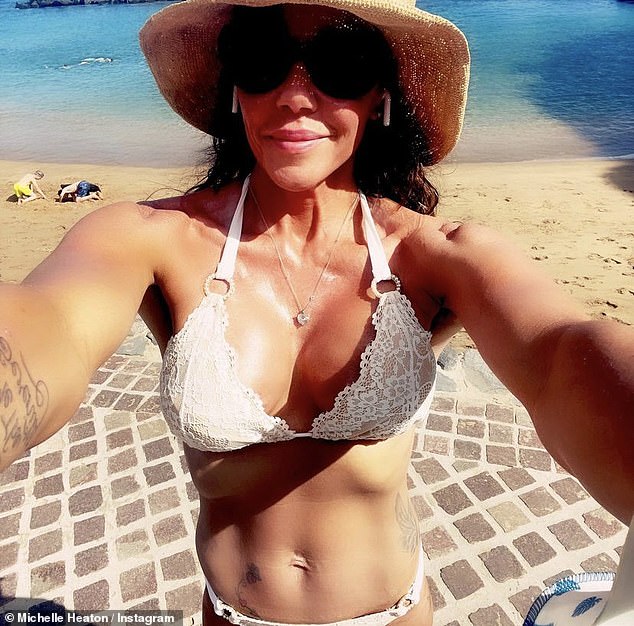 In her latest health update online, Michelle revealed she is now on a waiting list to see a specialist after her GP advised that she may need to have another reconstructive surgery soon, which she is ‘not looking forward to’.

Looking at the situation positively the star added that she is ‘facing this one sober’ and that she will ‘come through it again stronger’.

Michelle revealed that her recent shoot with OK! Magazine with her family sparked concern among fans who reached out via social media.

She penned: ‘So, I wasn’t going to say anything but I’ve had so many comments on here and on @ok_mag Instagram and direct messages with people worried about my breast implants after seeing the video and photos in this weeks @ok_mag… 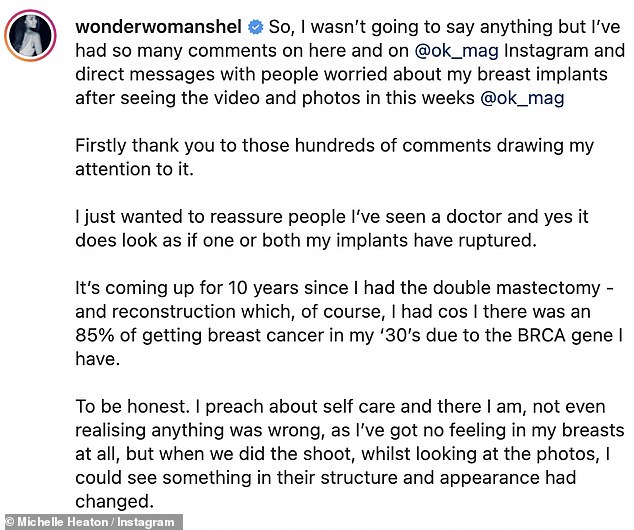 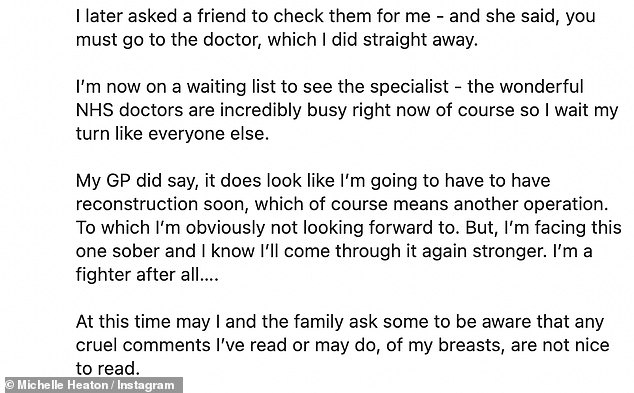 Speaking out: The star shared some heartfelt words, thanking fans for their concern and detailing her next steps 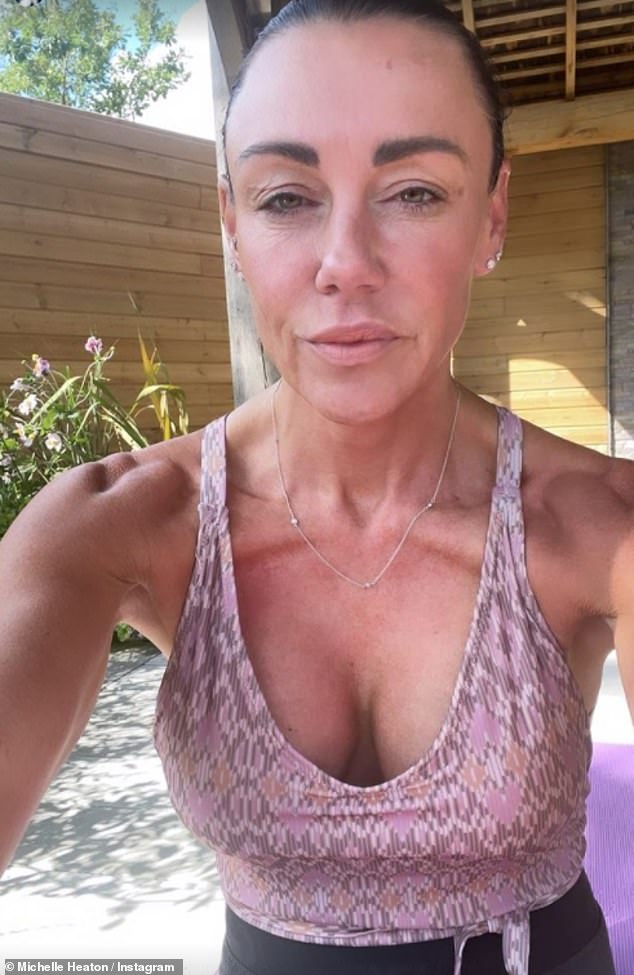 Struggles: It comes after Michelle had a double mastectomy and reconstruction 10 years ago due an 85 per cent risk of getting breast cancer in her 30s due to the BRCA gene

‘Firstly thank you to those hundreds of comments drawing my attention to it. I just wanted to reassure people I’ve seen a doctor and yes it does look as if one or both my implants have ruptured.

‘It’s coming up for 10 years since I had the double mastectomy – and reconstruction which, of course, I had cos I there was an 85% of getting breast cancer in my ’30’s due to the BRCA gene I have.

‘To be honest. I preach about self care and there I am, not even realising anything was wrong, as I’ve got no feeling in my breasts at all…

‘But when we did the shoot, whilst looking at the photos, I could see something in their structure and appearance had changed.’ 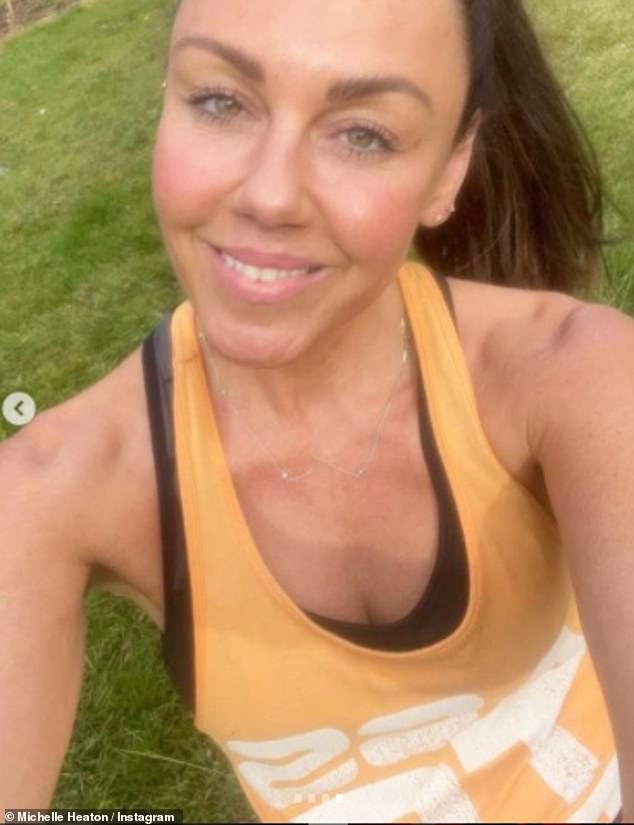 Worries: She is now on a waiting list to see a specialist after her GP advised that she may need to have another reconstructive surgery soon, which she is ‘not looking forward to’

On her next steps, she continued: ‘I later asked a friend to check them for me – and she said, you must go to the doctor, which I did straight away.

‘I’m now on a waiting list to see the specialist – the wonderful NHS doctors are incredibly busy right now of course so I wait my turn like everyone else.

‘My GP did say, it does look like I’m going to have to have reconstruction soon, which of course means another operation…

‘To which I’m obviously not looking forward to. But, I’m facing this one sober and I know I’ll come through it again stronger. I’m a fighter after all….’ 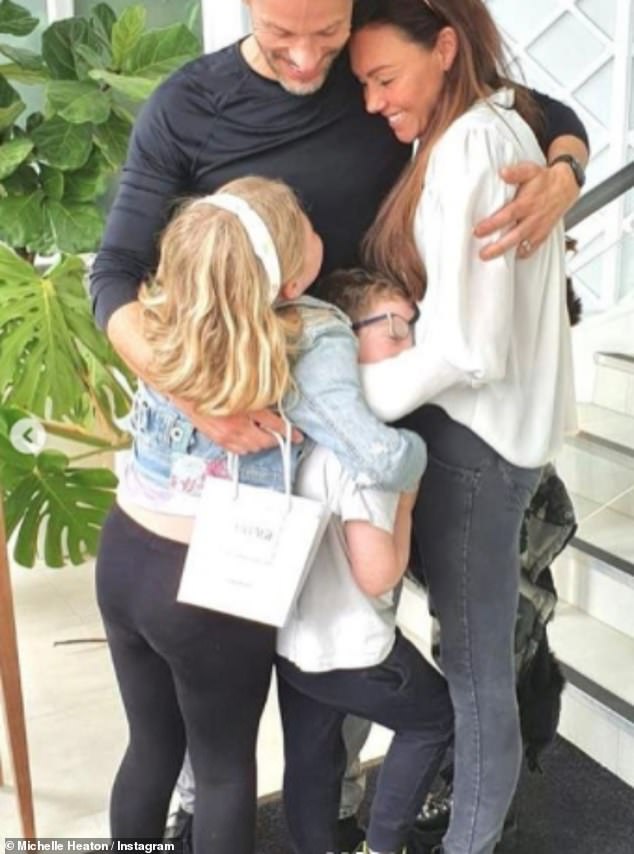 Family affair: Michelle is being supported by husband Hugh Hanley, and their children Faith, nine, and Aaron, seven

She signed off by saying: ‘At this time may I and the family ask some to be aware that any cruel comments I’ve read or may do, of my breasts, are not nice to read.’

Her new post comes days after Michelle hit out at news that the government are planning to crack down on drug users, in the wake of her own addiction battles.

Taking to Instagram on Tuesday, the star who has been candid about her three year drink and drug hell, shared a series of snaps from the height of her battle and penned a lengthy caption about tackling substance abuse.

Her post came just hours after Boris Johnson warned middle class drug users he will not sit ‘idly by’ and let them fund crime as he unveiled a £300million narcotics blitz – a scheme slammed by Michelle, who called for better education on the matter. 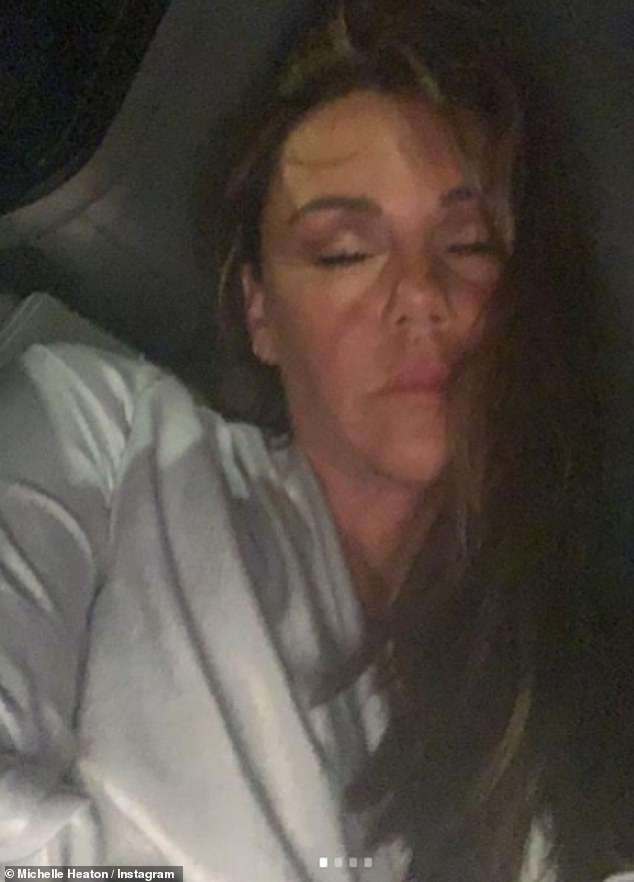 Shock: Her new post comes days after Michelle hit out at news that the government are planning to crack down on drug users, in the wake of her own addiction battles

Earlier this year, Michelle, who is now 32 weeks sober, first announced she was seeking treatment for her drink and drug addiction, which saw her binging nightly.

On Tuesday, she posted a trio of images – two of which showed the ravages of her addiction, including appearing to passed out and another showing her with bloodshot eyes, and two shots showing her happy and healthy.

In her caption, she explained the post was a reaction to the government crackdown and reflected: ‘Harsher punishments will unfortunately not stop us real addicts it will drive us to be more manipulative in our addictions’.

The PM warned recreational users face being stripped of their passports and driving licences under new curbs unveiled today, as he joined police on a dawn raid.

They also face receiving text messages from police if their numbers are found on dealers’ phones – with all the points being slammed by Michelle. 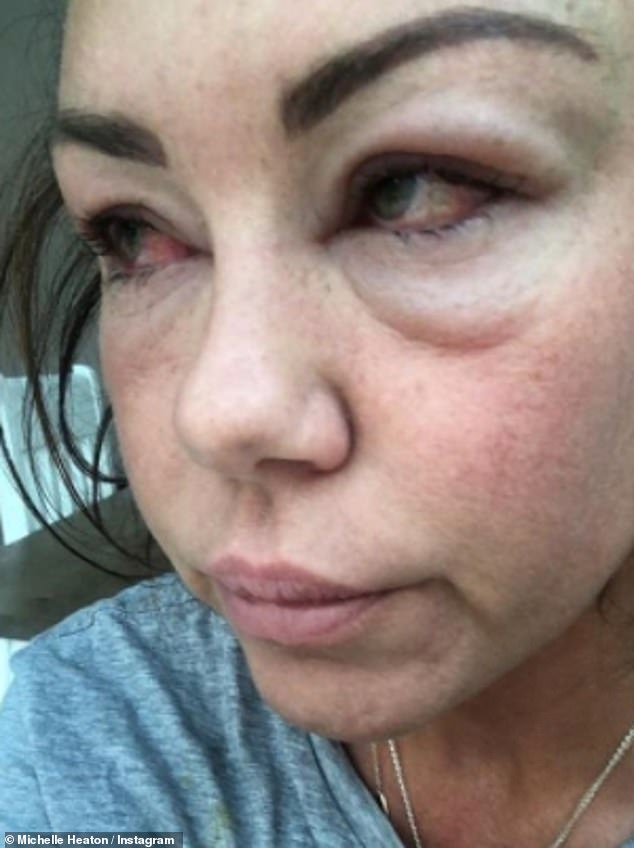 Pained: Taking to Instagram on Tuesday, the Liberty X star, who has been candid about her three year drink and drug hell, shared a series of snaps from the height of her battle and penned a lengthy caption about tackling substance abuse

Michelle wrote in her impassioned message: ‘I wanted to wait till I had the facts before I wrote this and I was am armed with the facts of today’s announcement on the government’s plans to tackle addiction…

‘I welcome any efforts by governments to address this issue that affects too many families. Tackling the suppliers and helping those in addictions is amazing. I’m so pleased to hear of the extra treatment places, they are sorely needed…

‘I’ll be honest – I didn’t have the money to get help, friends and family lent me that and I possibly wouldn’t be here now had they not as I needed the treatment within days. I’m hoping I’ll hear the word education lots in the coming days… 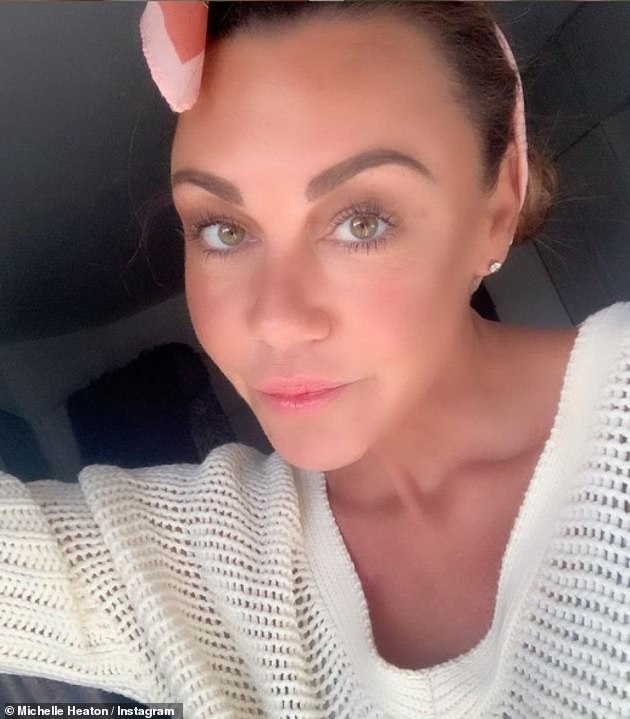 Terrifying: Michelle admitted over the past three years she didn’t go a day without alcohol, and even when she was told last September she would die it still didn’t deter her (pictured September 2020)

‘Early education in schools is sorely needed and this is something I really feel strongly about. This disease does NOT discriminate. It affects people in poverty and people with money…

‘Once an addict we will stop at NOTHING to get the next hit, fix, high! Whatever that may be. Harsher punishments will unfortunately not stop us real addicts it will drive us to be more manipulative in our addictions!…

‘It’s a disease of the mind and the body. We need to also concentrate on STOPPING it before it grips us. Where do addictions begin? “Brought up that way” “Followed parents” “Had no choice” “Bad relationships” The list is endless…

‘It’s NOT a middle class problem it’s a you and me problem. It’s the kid who never fit in, it’s the wife at home bored. This disease does NOT discriminate…

‘There is no poster boy or girl for this. Punishment in itself is not an answer as it just ignores where and how to tackle it before it begins! Education, help lines and more information is needed most! From, a grateful recovered addict!…

‘Michelle Heaton, age 42 no bad upbringing didn’t grow up in poverty & certainly no middle class issues and never set out to be an addict…

‘I never knew what an addict was until I almost died. Had you given me a warning or called me up and fined me when I was in the madness I wouldn’t have stopped…

‘Information, the meetings and the 12 step programme got me sober! And guess what? It’s free! My passion now is giving back and helping others get sober and clean.’

For advice about drugs and alcohol visit www.talktofrank.com 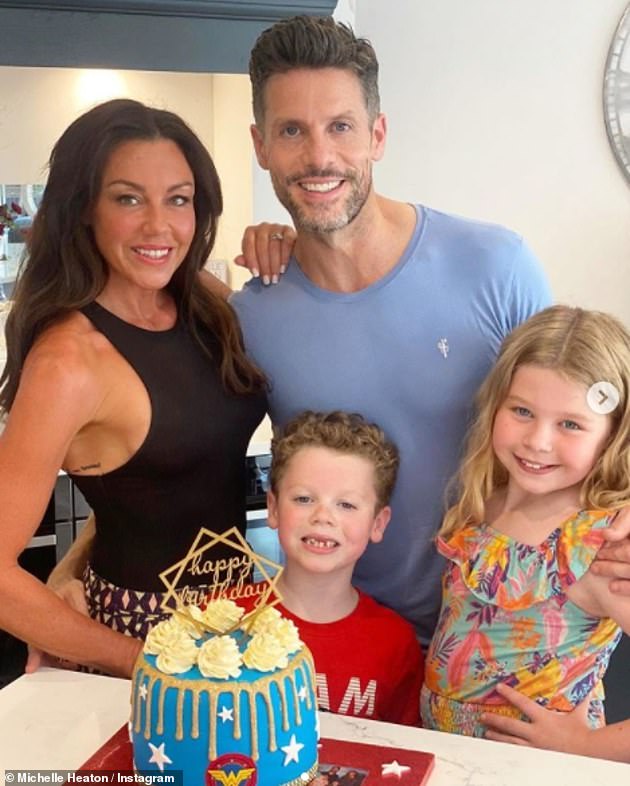 Love: Michelle says her businessman husband has been her ‘rock’ through her low periods and rehab treatment