‘He was brought into this world way too early’: The Apprentice’s Michelle Dewberry, 40, confirms she has given birth to her first child at 31 weeks

The Apprentice’s Michelle Dewberry, 40, has confirmed she has welcomed her first child to the world, a son born at 31 weeks.

Taking to Instagram, she shared a trio of images of the tot from within hospital and added a gushing caption about the arrival and her complicated pregnancy.

Filling fans in on the birth, she wrote: ‘I am super proud and happy to share the news that I am now a Mummy!! My beautiful little man was brought into this world way too early (31 weeks) following further complications.’ 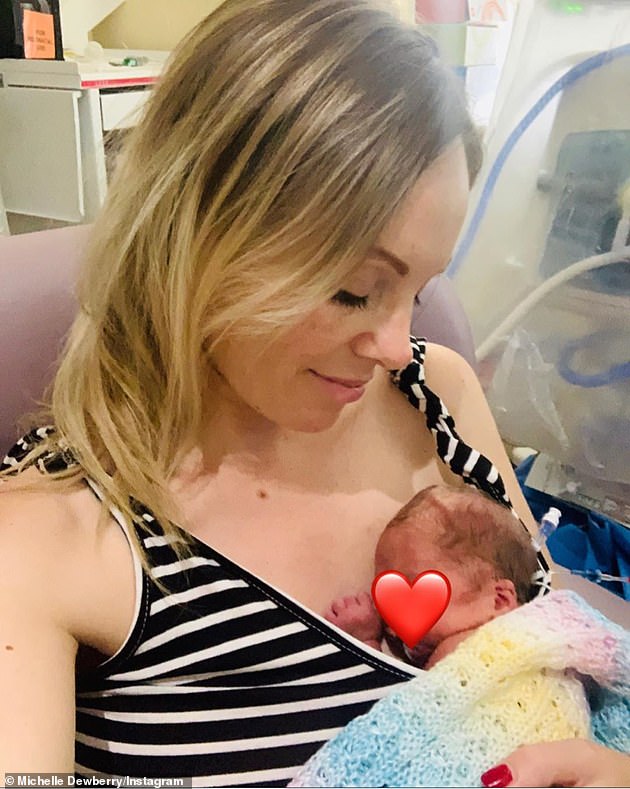 He’s here: The Apprentice’s Michelle Dewberry has confirmed she has welcomed her first child to the world, a son born at 31 weeks

Michelle went on: ‘He is already showing that he takes after his mamma and is a strong, feisty little human. Having got through my complicated pregnancy, I have now entered the next chapter on our journey, that of NICU.

‘I wouldn’t wish NICU on anybody and certainly not in a pandemic. It is exhausting, draining and often very scary… Here’s hoping we graduate this chapter as quickly, as healthy and as safely as humanly possible’.

A fortnight ago, Michelle revealed she had been in hospital for a month after her waters broke early.

The star took to social media to reveal she’d passed the 30th week of her pregnancy, but had been hospitalised after suffering from preterm premature rupture of the membranes (PPROM), which can trigger early labour. 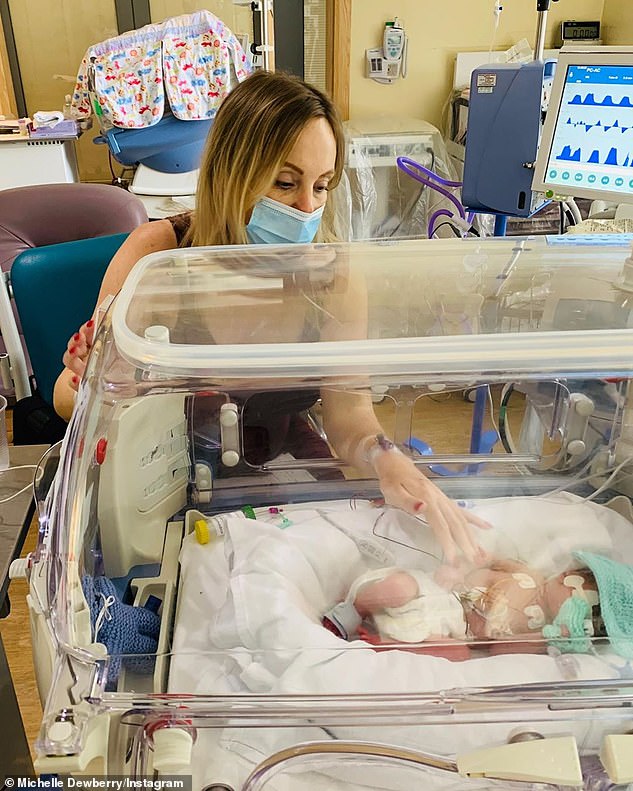 He’s arrived: Taking to Instagram, she shared a trio of images of the tot from within hospital and added a gushing caption about the arrival and her complicated pregnancy 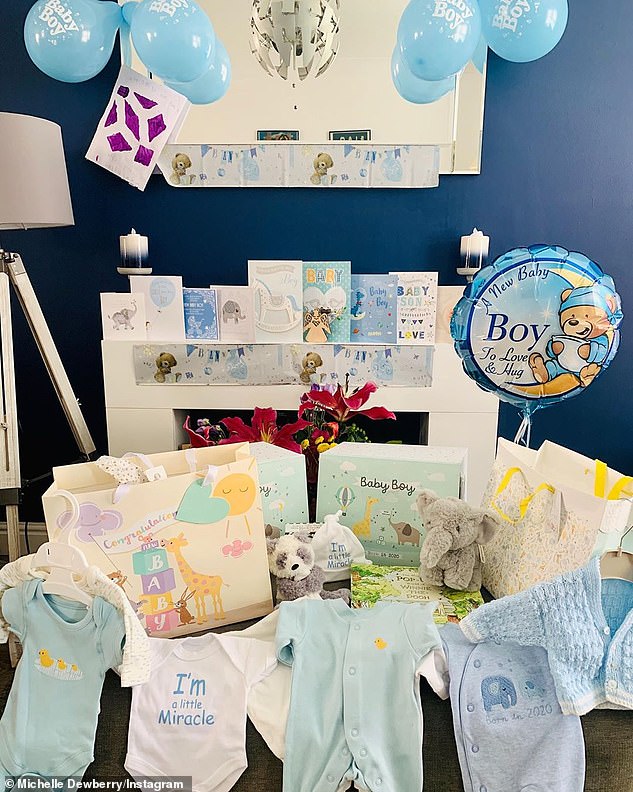 Adorable: She shared an image of the many gifts given to the tot

Michelle first announced she was expecting her first child in April, but confessed that the COVID-19 pandemic had ‘taken away many of the small joys of pregnancy.’

WHAT IS PRETERM PREMATURE RUPTURE OF MEMBRANES?

Preterm premature rupture of the membranes (PPROM) is a pregnancy complication that occurs when an expectant mother’s waters break before 37 weeks.

Once the amniotic sac has broken, it raises the risk the baby will be born prematurely, or the mother or baby will suffer an infection.

PPROM affects just three per cent of pregnancies in the UK and US, but is thought to be responsible for around 30-to-40 per cent of premature births.

Its cause is usually unknown.

Previously having a preterm birth, an infection of the reproductive system or vaginal bleeding raises the risk, as does smoking during pregnancy.

PPROM is diagnosed via a speculum that looks inside the vagina for fluid leaking from the cervix.

A pH test then determines if the fluid is amniotic, vaginal or urine.

Treatment depends on the symptoms, pregnancy and a woman’s general health.

Bed rest may be required, with doctors monitoring for signs of labour, as well the baby’s health and indications of infection.

Steroids may be given to help the baby’s lungs grow and antibiotics might be prescribed to reduce the risk of infection.

Tocolytic medicines may be given to prevent premature labour.

However, in some cases, labour may be the best option, such as if there are complications.

PPROM’s main complication is a premature birth, however, it can also lead to infections of the amniotic fluid or membranes, separation of the placenta from the uterus, or a C-section.

She had been updating fans on her condition on Instagram, explaining she was hospitalised after rushing to visit her mum when lockdown restrictions were eased.

The star revealed she’d been diagnosed with PPROM, which is a complication in pregnancy when the amniotic sac, or waters, burst before the 37th week, and sometimes triggers premature labour.

Due to COVID-19 limitations, Michelle also revealed she’s been unable to have visitors during her time in hospital, calling the early days ‘horrendous and traumatic.’

In a post shared on 26 June she wrote: ”You can now visit a loved one”, they said. After months of lockdown, I didn’t need asking twice! I couldn’t get over to Hull to see my Mum quick enough!

‘Sadly, no sooner had I arrived, my waters unexpectedly broke, *very, very* prematurely (this is called PPROM).

‘Que me immediately being admitted to the nearest hospital. What followed next was pretty horrendous I’m not gonna lie and traumatic, to put it mildly.

‘Over a week later, I haven’t moved and that hospital has become my current home – looks like I won’t be going anywhere for a while. No visitors are allowed, at all-no exceptions-because of Covid so it’s just been me and my bump.’

Michelle sadly suffering a miscarriage in 2006. The TV star was believed to be three months pregnant with The Apprentice co-star Syed Ahmed.

A spokesperson told The Mirror at the time: ‘Michelle and Syed are both extremely upset and are currently supporting each other through this difficult period.’

Michelle confirmed her relationship with Simon last July, just a few months after revealing her plans to become a parent via a sperm donor.

In January 2019, the presenter said on her Sky News debate show The Pledge: ‘I don’t have a partner and I want to be a mum.

‘So I’m going through the process of looking at sperm donor and in this country there is a law where when the children get to 18 they have the legal right to access various identifying information about the father.

‘And for me personally I’m in this really complex situation. I wouldn’t regard the donor as my children’s father.’

On Michelle and Simon’s blossoming romance, a source told MailOnline the pair put on an affectionate display during a The Specials concert, describing Jordan as ‘affectionate, smitten and the perfect gentleman.’

The insider said: ‘They met when they were both on the Matthew Wright show. He took her to The Specials concert in London… 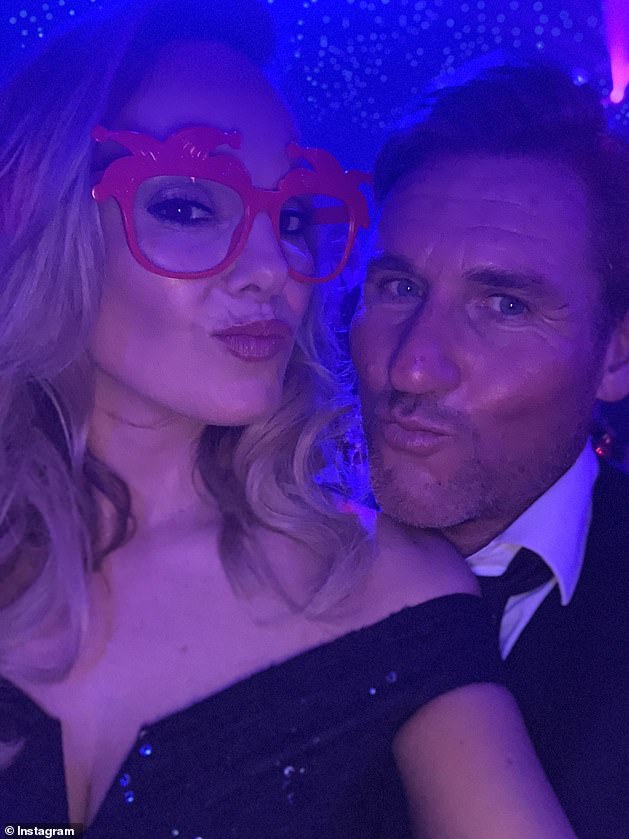 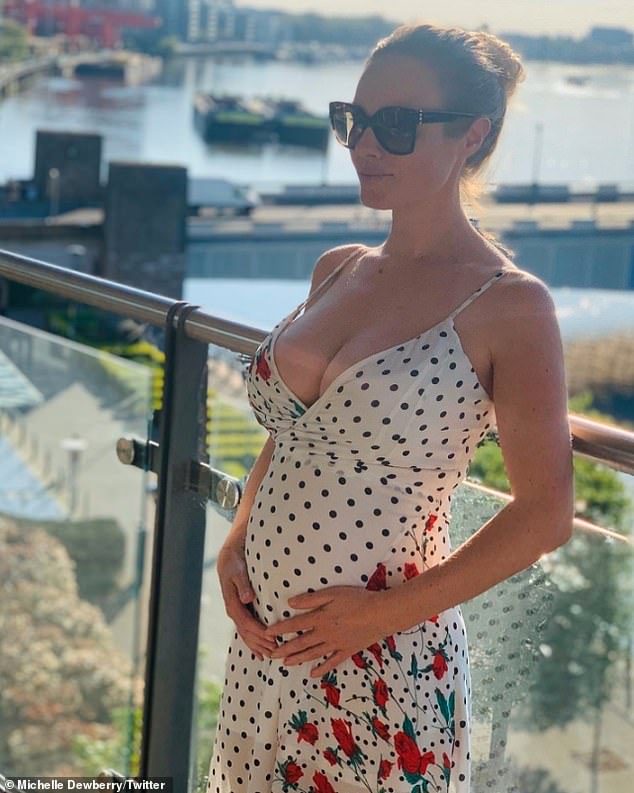 Radiant: It was also reported that Michelle added on Facebook that she’s ‘never being one to follow the easy route in life

‘Michelle stood in the sound box – I’m guessing to avoid the crowd following her surgery – and Simon was the perfect gentleman towards her. He was very attentive and affectionate towards her and seemed to be smitten.’

Michelle, who grew up on a Hull council estate and dropped out of school at 16 with just two GCSEs, shot to stardom after becoming Lord Alan Sugar’s Apprentice in 2006.

In the 14 years which followed, she forged a successful career in business and TV, and even aimed to become an MP for the Brexit Party, which ended in defeat as she lost to Labour’s Emma Hardy late last year. 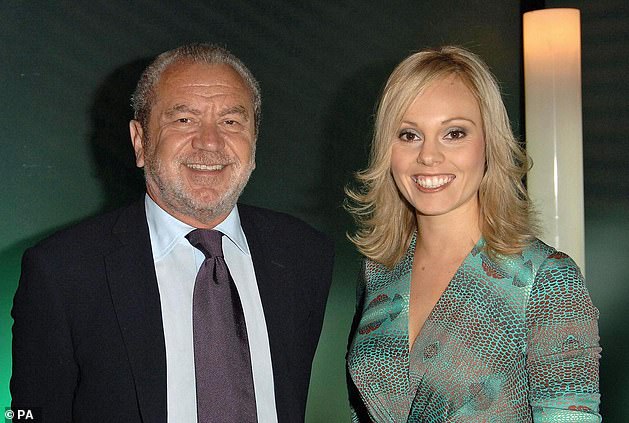