‘It’s a father’s worst nightmare’: Footballer Michael Owen breaks his silence over daughter Gemma, 19, signing up for Love Island after she admitted he ‘isn’t happy about it’

Michael Owen has broken his silence over daughter Gemma signing up for this year’s Love Island.

Speaking to ITV News, Michael, 42, said: ‘I have no doubts that she will make us all proud.

‘It’s probably a father’s worst nightmare, but whatever she wants to do you’ve got to be supportive. 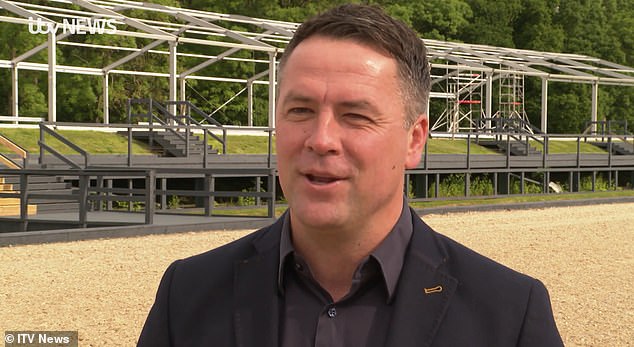 ‘It’s a father’s worst nightmare’: Michael Owen, 42, has broken his silence over daughter Gemma, 19, signing up for Love Island after she admitted he ‘isn’t happy about it’

‘I’ve heard a lot about it. I think old, grumpy men like me will always have an opinion on it because I don’t watch it and you just hear snippets, but she assures me it’s not as bad as I think.’

He described Gemma as a ‘sensible girl’, explaining: ‘It’s quite a big thing and whatever she wants to do, you have to be supportive and I think I’ve given her a decent enough grounding to be respectful’.

His words come after Gemma admitted her England legend dad Michael ‘isn’t happy’ about her signing up for Love Island but he trusts her not to ’embarrass’ him. 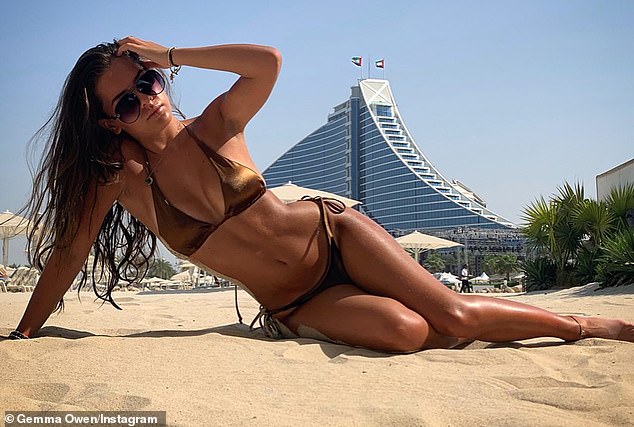 Protective father: Gemma Owen has admitted her England legend dad Michael ‘isn’t happy’ about her signing up for Love Island but he trusts her not to ’embarrass’ him 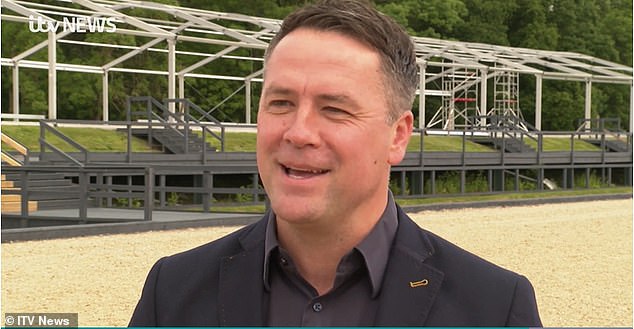 First time viewer: ‘I’ve heard a lot about it. I think old, grumpy men like me will always have an opinion on it because I don’t watch it and you just hear snippets, but she assures me it’s not as bad as I think,’ he explained 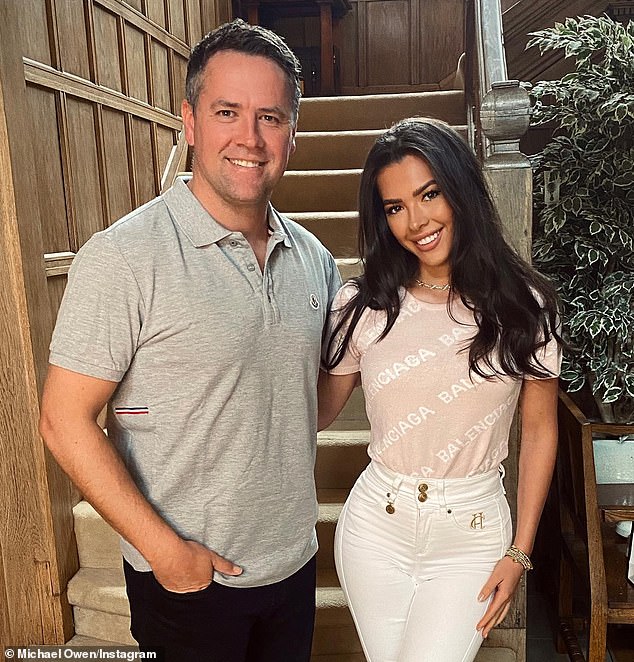 Proud dad: He described Gemma as a ‘sensible girl’, explaining: ‘I’ve got no doubts that she’ll make us all proud’

The swimwear brand owner, 19, told MailOnline that Michael, 42, resisted having a ‘tantrum’ after learning she will be on the dating show this summer, eventually giving his blessing, saying: ‘I’m not going to tell you what to do.’

Speaking from Mallorca ahead of the series launch on Monday, Gemma revealed that she hopes to dispel misconceptions about being a footballer’s daughter, after receiving nasty comments from trolls about her privileged upcoming.

She said: ‘I still wouldn’t say that my dad is buzzing about me doing Love Island. 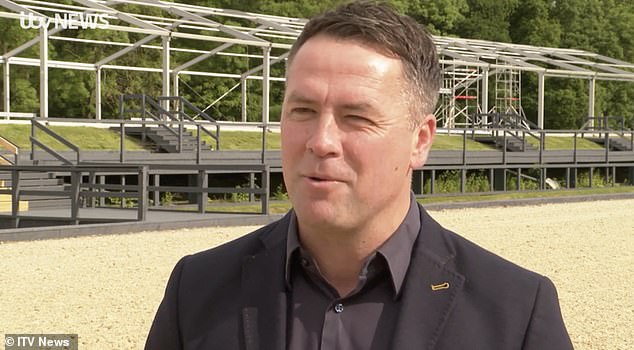 Doting dad: ‘You have to be supportive and I think i’ve given her a decent enough grounding to be respectful,’ he shared

‘He’s very supportive in whatever I decide to do. He didn’t have a massive tantrum or anything like that. He was pretty chilled, he trusts me not to do anything to embarrass him. He took it quite well.

‘He didn’t say I couldn’t do this or give me any dos or don’ts. He said I’m not going to tell you what to do, I trust you, you have never given us a reason not to trust you, go for it but I will always have my family’s thoughts and opinions in the forefront of my mind because we are all super close and they are the most important people to me.’ 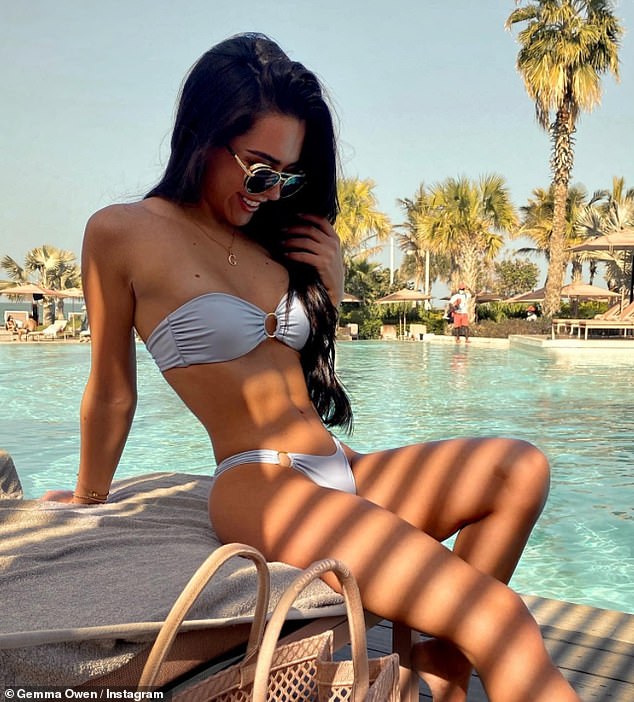 Asked how she broached the idea of going on the show with her family, Gemma said: ‘I definitely discussed it with them. I wouldn’t say that they were 100 per cent happy with it, but I would definitely say they trust me… not to do anything to purposely disrespect them.’

Gemma added that she would probably avoid having sex in the villa.

She said: ‘What my family think is always going to be in the forefront of my mind as they are the most important thing to me.’

The entrepreneur revealed Michael had given her few words of wisdom before she flew out to the Spanish island while her mother Louise had reminded her to ‘keep it classy.’ 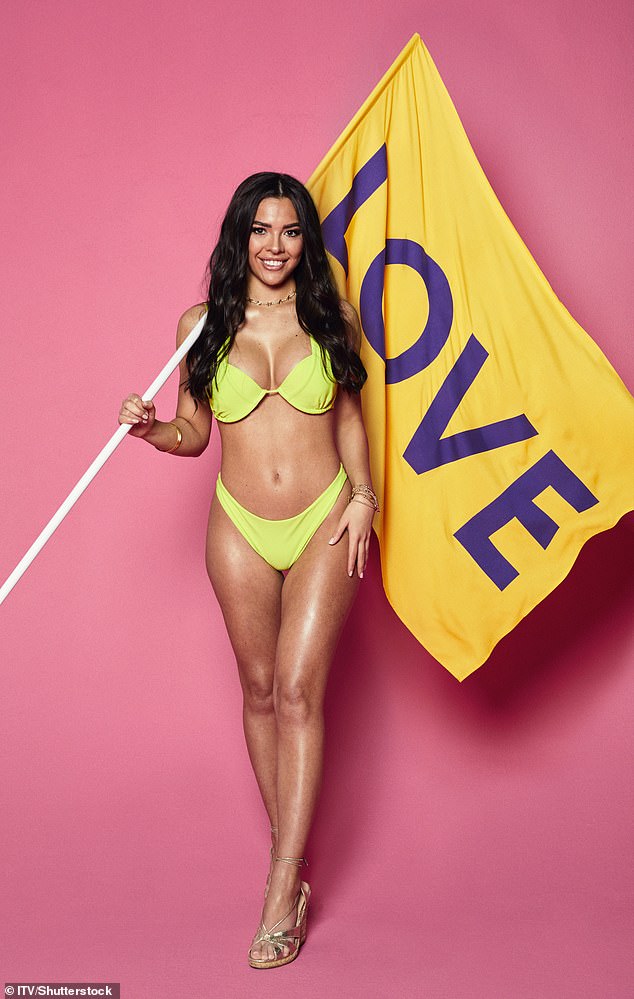 Uphill battle: Gemma says she’s grown a ‘thick skin’ after being trolled for being the daughter of a wealthy footballer despite trying hard to carve out a career of her own 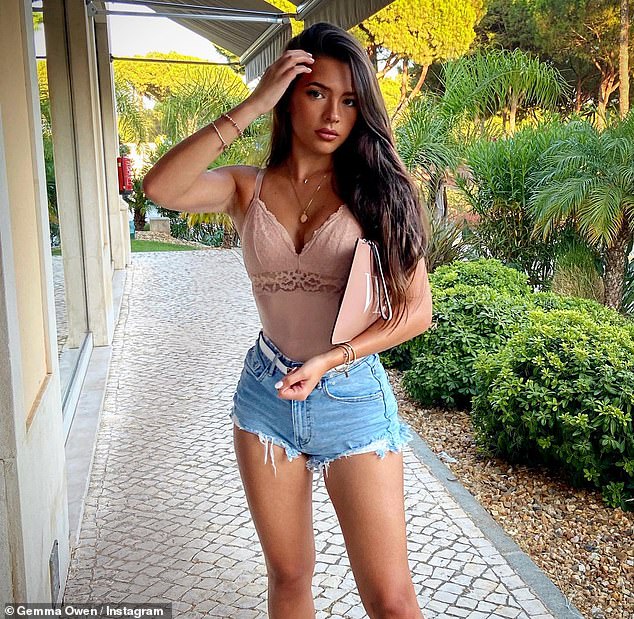 Crossing the line: Gemma added that she would probably avoid having sex in the villa

Gemma won’t be ‘bragging’ about her dad’s famous career to potential suitors, even if they’re die-hard football fans.

She said: ‘I don’t think I’m going to go in there and say ‘my dad was a footballer’ because I am not really that type of person but if they ask me what my parents do then I won’t keep it a secret, I’ll be honest but I won’t go in there bragging about it. I’ll only address it if people ask me.’

In March, Gemma confessed to feeling frustrated after receiving cruel comments from trolls who judge her for being the daughter of a wealthy footballer. 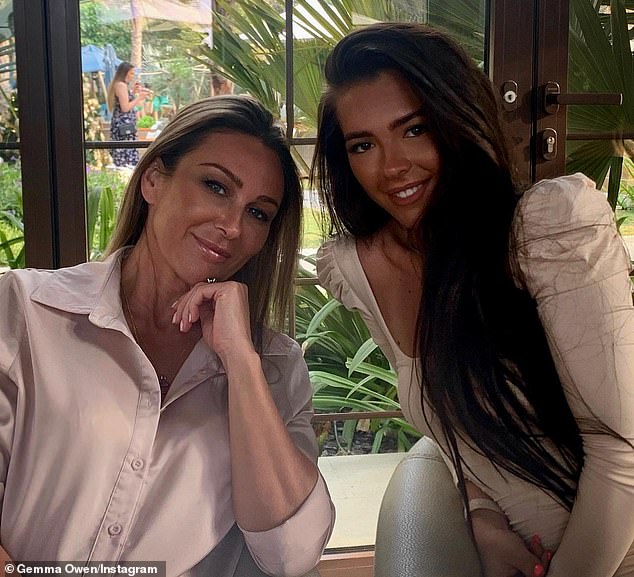 Close family: The brunette says she’ll miss debriefing with her mum Louise after going on dates with potential suitors on the show 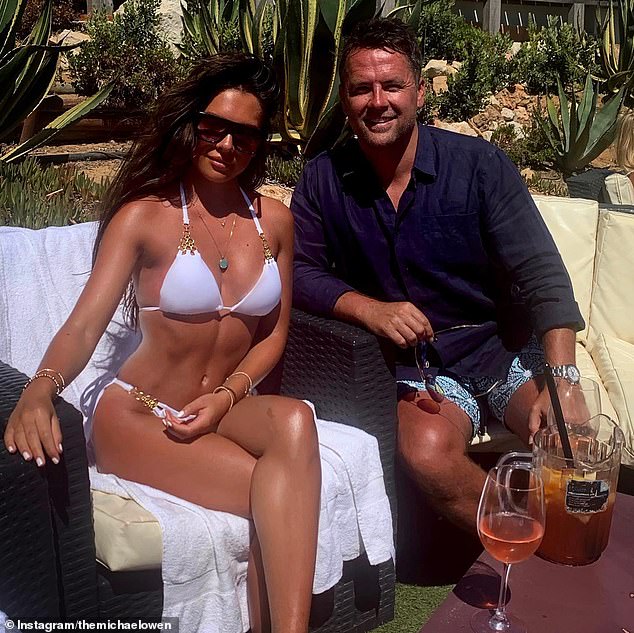 Close: Michael and Gemma pose for a photo during an exotic overseas family holiday

Gemma, who’s a Team GB dressage champion and this year launched her own swimwear business, which she says was achieved without Michael’s financial backing, said she’s grown a ‘thick skin’ following weeks of criticism.

She explained: ‘Trolling is one of those things. I get trolled just for being the daughter of an ex-footballer.

‘I have represented my country in my sport and setup my own business yet I still get pretty nasty comments. 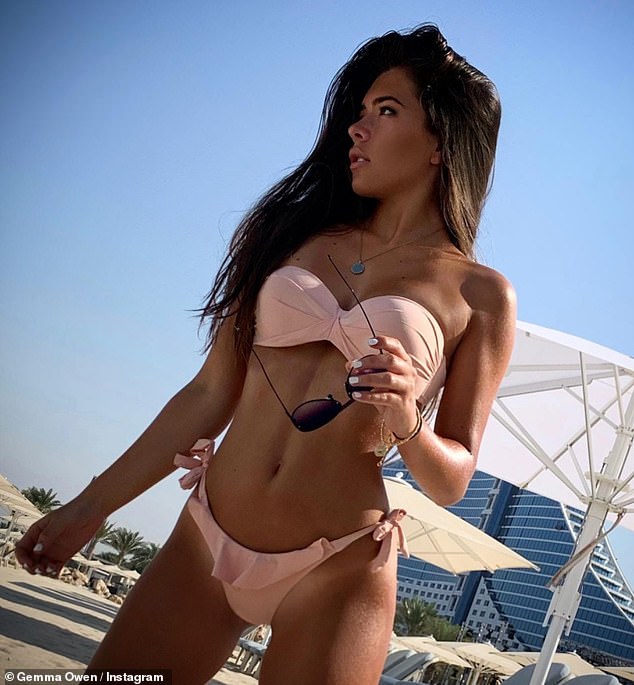 Unsure: At the beginning of the year, Gemma was certain appearing on Love Island wasn’t in her future

‘It will always be there and I can’t get away from it but I’m lucky I have a thick skin and I only care about the opinions of people close to me like my family and friends.

‘If you are always worrying about what people have to say then you’ll never truly be happy. It is one of those things that come with it and I’ll have to get on with it.’

At the beginning of the year, Gemma was certain appearing on Love Island wasn’t in her future.

But after failing to get the scores she needed to qualify for the dressage European Championship selection this summer, she decided now was the perfect time to pursue a different opportunity. 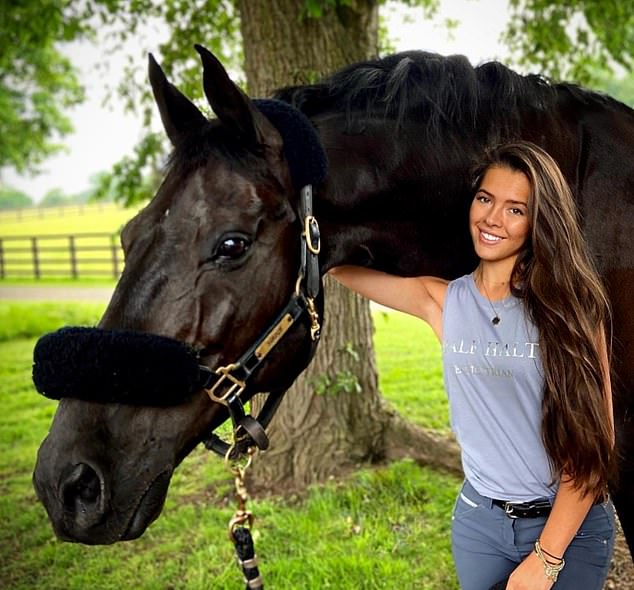 Day job: ‘In March I was still heavily campaigning for my dressage season, which was my priority,’ she explained 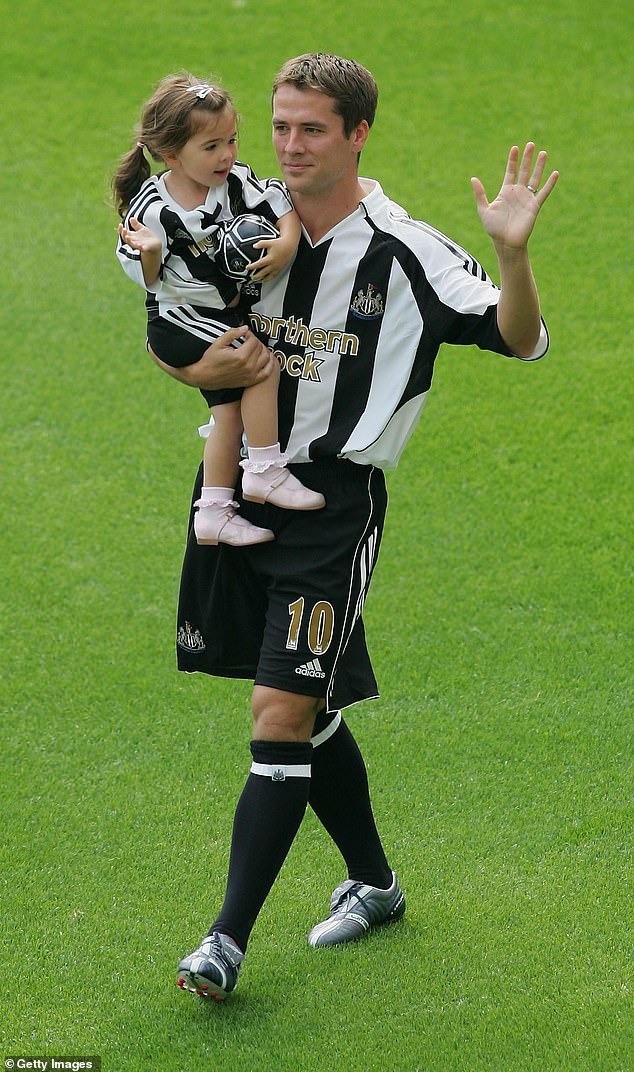 Sweet: Gemma is the eldest of four children former England and Liverpool star Michael shares with wife Louise (Gemma and Michael pictured in 2005)

She said: ‘In March I was still heavily campaigning for my dressage season, which was my priority.

‘Over the summer it is the busiest time for my competition so the thought of having two months out was not an option at that point but as the season went on, I had a bad start… I didn’t get the scores that I needed so I ruled myself out of selection for European Championships again.

‘I few management companies started to show me interest and I was more willing to hear what they had to say. If there was any year to do it, then this year would probably be the one.’ 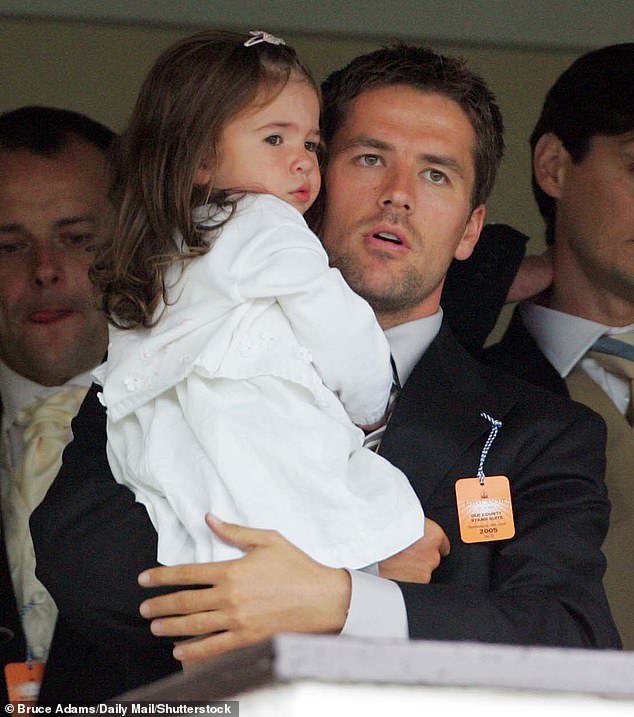 Old times: Infant Gemma with dad Michael in The Box At Royal Ascot in 2005 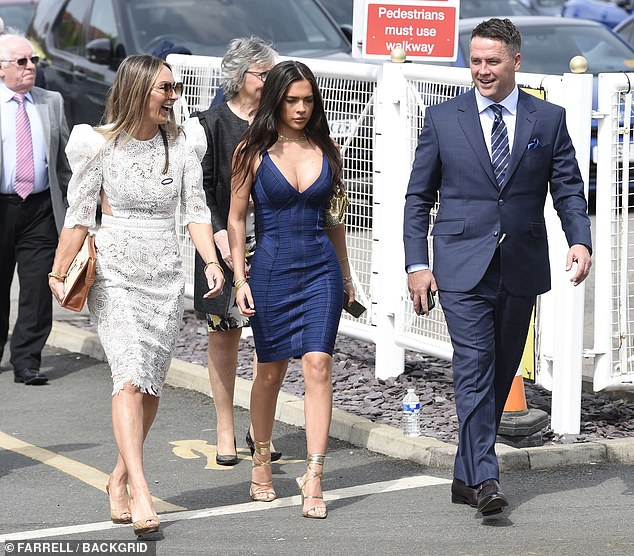 Day out: Gemma with parents Michael and Louise during the Boodles May Festival Ladies Day at Chester Racecourse

As she begins a potential eight-week stint on Love Island, Gemma, who still lives at home, says she’ll miss her mum the most because of their close relationship, which includes debriefing after Gemma’s been on dates.

She said: ‘My family and I are so close, my mum and me especially have an amazing relationship so I’ll miss her and talking to her, that’ll be challenging for me.

‘When I go out on dates with a new person I’ll tell her every single detail, what they wore, what we spoke about and it’ll be different not having her there to speak to.’