Mia Regan looks downcast as she steps out for a stroll in St. Tropez – following split from Romeo Beckham after three years together

She split from Romeo Beckham recently after three years due to the ‘pressures’ of navigating a long distance relationship.

And Mia Regan looked downcast as she stepped out for a stroll while on holiday in St. Tropez on Saturday.

The model, 19, cut a casual figure for the outing as she donned a  beige long-sleeved crop top that highlighted her toned midriff. 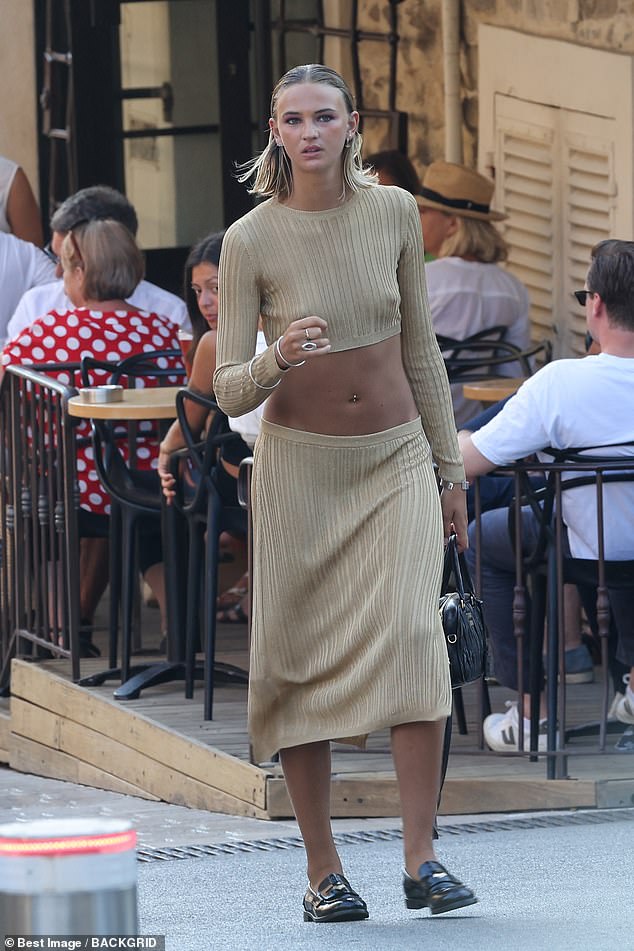 Outing: Mia Regan looked downcast as she stepped out for a stroll while on holiday in St. Tropez on Saturday

The star also wore a matching skirt while she wore her blonde locks in a poker straight style.

Also sporting a pair of black shoes, Mia completed her look for the day with a matching handbag.

Mia strolled with a female pal on the outing in the French commune, where Romeo’s older brother Brooklyn has also been holidaying in recent days.

It comes after sources confirmed the couple parted ways due to the inevitable pressure caused by their conflicting work schedules, with Romeo spending much of his time in the United States while he pursues a football career. 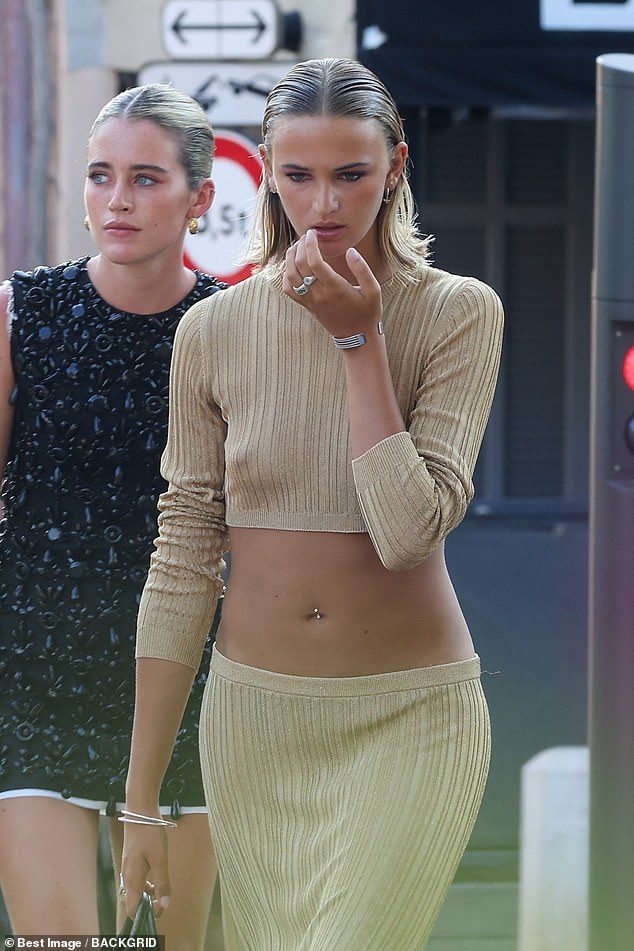 Outfit: The model, 19, cut a casual figure for the outing as she donned a beige long-sleeved crop top that highlighted her toned midriff

A source told MailOnline: ‘Essentially the long distance relationship at their young ages took its toll.

‘Romeo and Mia are both lovely young people, they’re very fond of each other and the family love Mia.

‘She’s continuing to collaborate with Victoria Beckham through her work, but sadly Romeo and Mia aren’t together anymore.’

Romeo is currently playing as a midfielder with Florida based Inter Miami II – the club his father David Beckham co-owns – while Mia is primarily based in London. 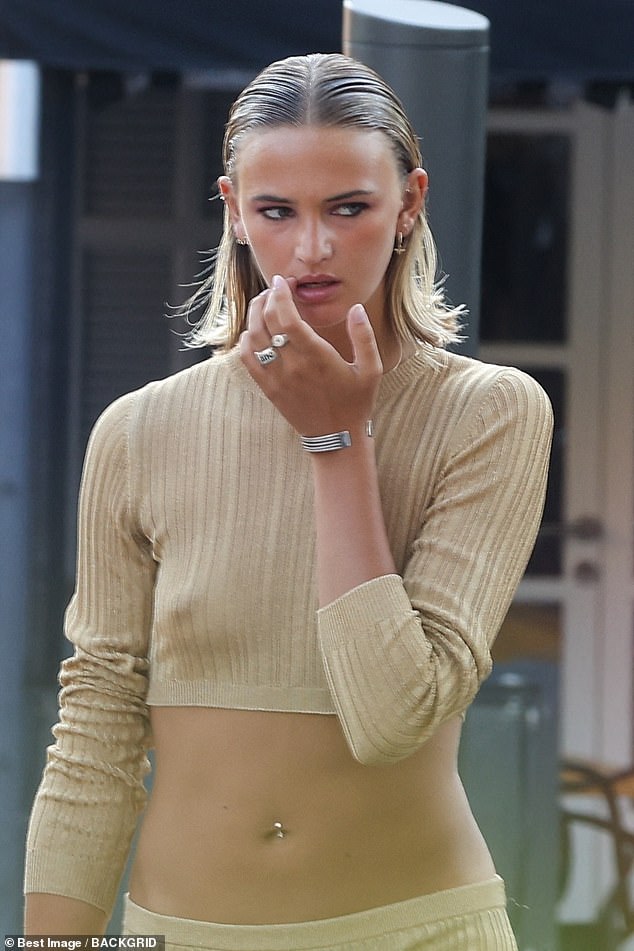 Casual: The star also wore a matching skirt while she wore her blonde locks in a poker straight style

The source added: ‘He’s focused on his football and living in Miami and she’s in the UK, working on her modelling and influencer career.

‘It’s amicable. The pair still support each other in their respective careers and she recently commented on him scoring for his club.’

The Inter Miami II footballer regularly shares pictures of Mia on social media but his followers couldn’t help but notice they had vanished from sight last Monday afternoon.

One fan account wrote on Mia’s Instagram: ‘Romeo broke up with you? He deleted all pics of you on ig,’ while another wrote on a fan account: ‘Did they break up?’ 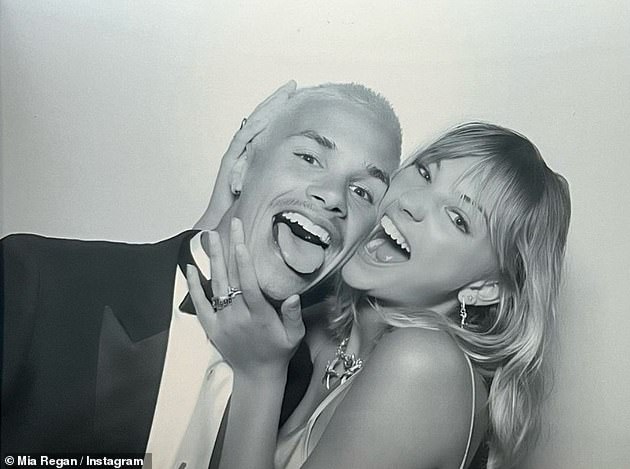 All over: Mia and Romeo Beckham recently ended their three year relationship after the strain of managing a long term relationship took its toll on the young couple

Romeo last featured on model Mia’s Instagram account more than two months ago, when she celebrated their anniversary as a couple in May.

Sharing a handful of images – including one of their matching love heart tattoos – she wrote: ‘I love you 5eva… three years around the sun wit uuuuuu.’

Meanwhile Romeo has devoted recent social media posts to friends and family, with his latest a tribute to his dad, former Manchester United and England footballer David Beckham, following his goal against Orlando City B on Sunday.

However, Mia did comment with a star emoji on Romeo’s most recent post on Monday, while he also ‘liked’ her most recent snap. 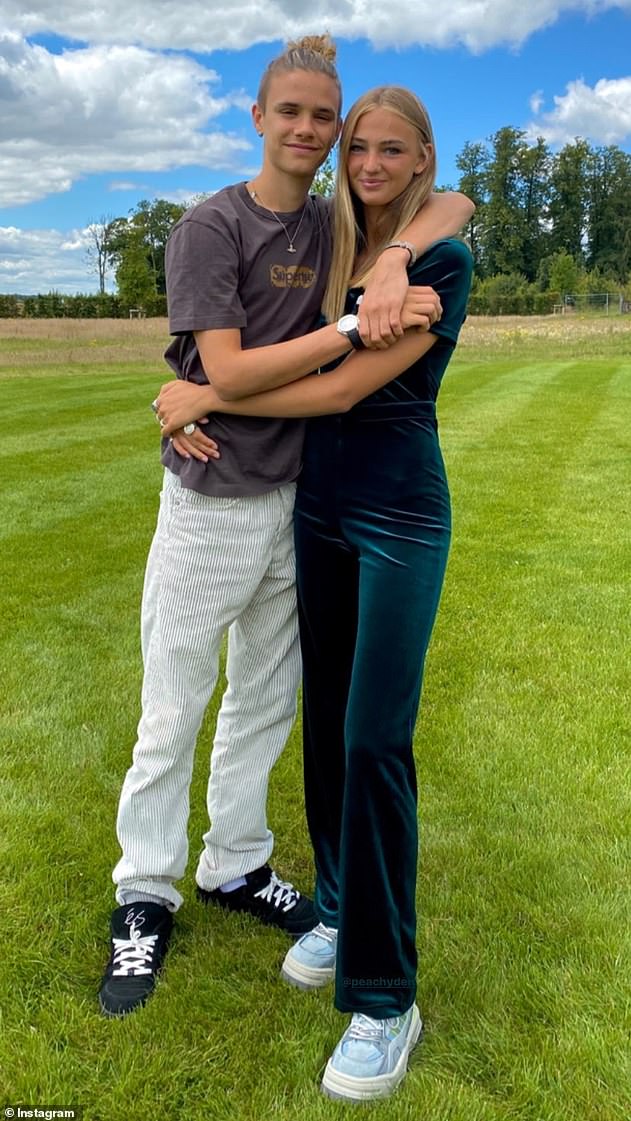 Missing: The Inter Miami II footballer regularly shared pictures of his long-term love on social media but his followers couldn’t help but notice they had vanished from sight last Monday