Meghan King Edmonds is getting real about her time in quarantine with three toddlers.

The former Real Housewives of Orange County star offloaded in a blog post on Friday detailing the difficulties she’s encountered as a single mother following her split from husband Jim Edmonds last year.

In the post titled ‘Diary of a single mom in quarantine…’ Meghan, 35, reveals her children scream ‘non-stop’ and also describes her heartache at seeing son Hart – who has a brain injury and struggles with his motor skills – regress. 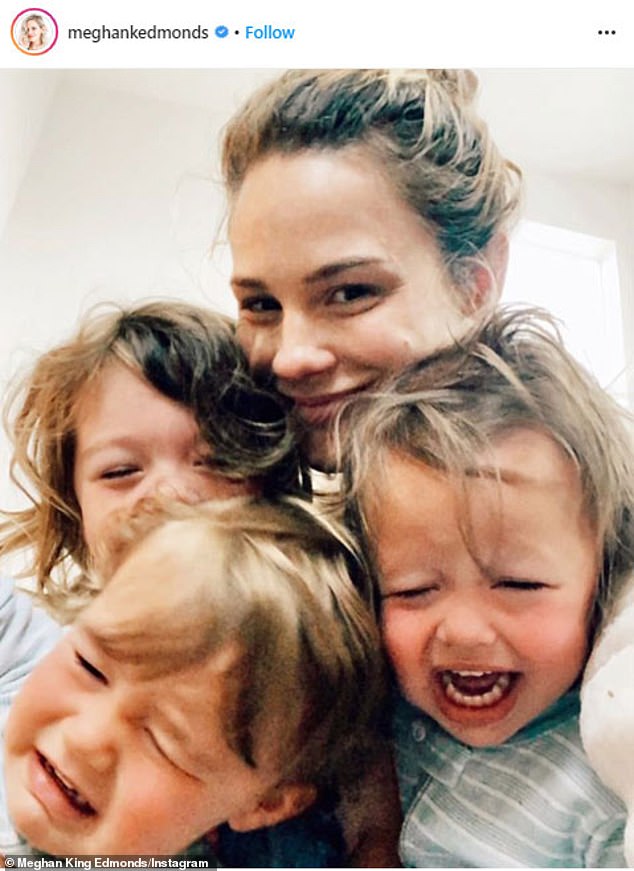 Single mom struggle: Meghan King is talking about life in quarantine with her three toddlers

‘I forgot what silence sounds like. My kids scream non-stop. They can’t verbally communicate well, even though cognitively they know what they want. And my house doesn’t have carpet—so there is nothing to muffle the sounds as they reverberate off every wall.’ Meghan writes.

‘There is nowhere to hide from the constant screaming. Not even the bathroom is safe. Try to pee in silence, let alone listen to yourself think…never mind, don’t waste your precious energy.’

Meghan shares daughter Aspen, three, and twin sons Hayes and Hart, 23 months, with Jim and is currently taking care of them at her home in Los Angeles while Jim stays at their other property in Missouri.

While the blonde beauty admits she has a nanny, and a beautiful spacious home, she still finds it very challenging with three extremely energetic and opinionated children. 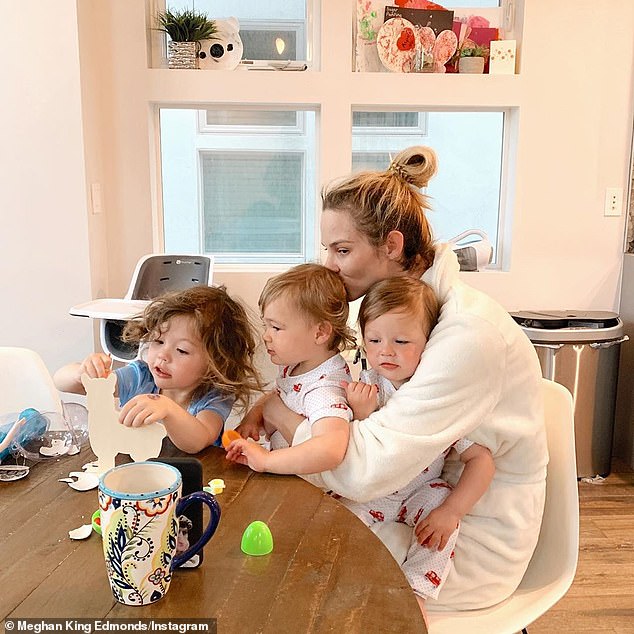 ‘I forgot what silence sounds like. My kids scream non-stop. They can’t verbally communicate well, even though cognitively they know what they want.’ Meghan writes in her new blog 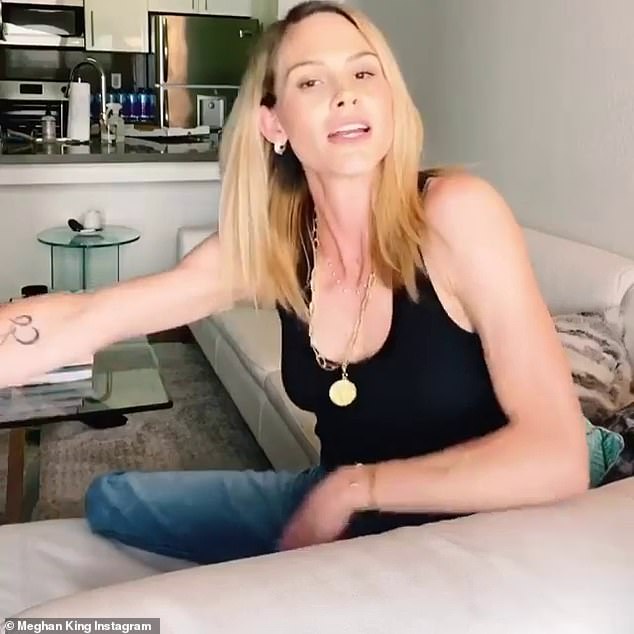 Managing: Meghan shares daughter Aspen, three and twin sons Hayes and Hart, 23 months, with Jim and is currently taking care of them at her home in California while Jim stays at their other property in Missouri

‘I don’t have a yard. There is no enclosed, outdoor space for my kids to run and play and burn off some of that toddler energy. And I’m going crazy.

‘So yes, I am incredibly fortunate… but I’m still going nuts. Because I’m still a mom: a working mom. I’m going through a divorce: a messy, public divorce. And I have three small children: one of whom has a disability.’

Meghan continues, ‘I’m worn out. In addition to the mental toll this crazy time has taken on all of us moms, the anxiety is taking a toll on my physical health. When I feel witchy enough to leave all three kids with my nanny to go on a run outside, I get worn out because I’m not used to that exertion.’ 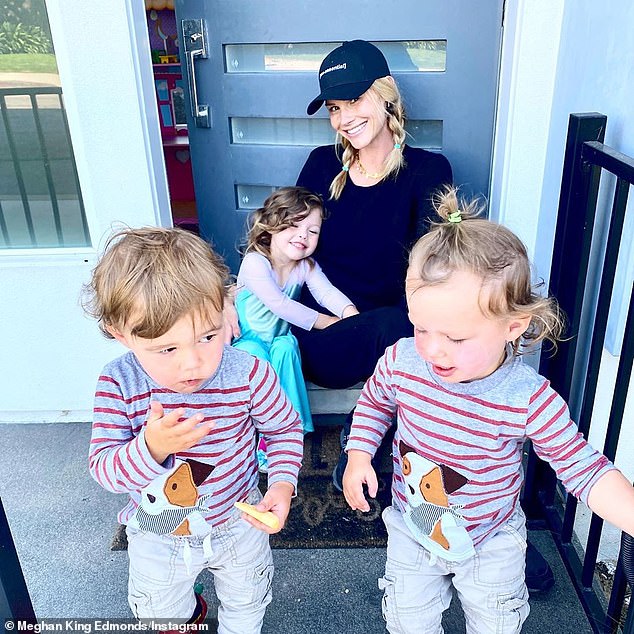 ‘I don’t have a yard. There is no enclosed, outdoor space for my kids to run and play and burn off some of that toddler energy. And I’m going crazy.’ Meghan reveals

The TV personality goes on to talk about Hart’s special needs and how the tot normally participates in speech therapy, physical therapy, and occupational therapy several times per week. But it’s stopped since the coronavirus lockdowns.

‘For me to try to takeover these therapies at home as a single-parent – it’s impossible. Between trying to get my own work completed and fighting for Hart’s focus (while also keeping the other two kids occupied), it just doesn’t happen. Therefore… I feel guilty. All the time’ Meghan explains.

The mom-of-three admits that Hart’s progress had plateaued back in February before the quarantine. 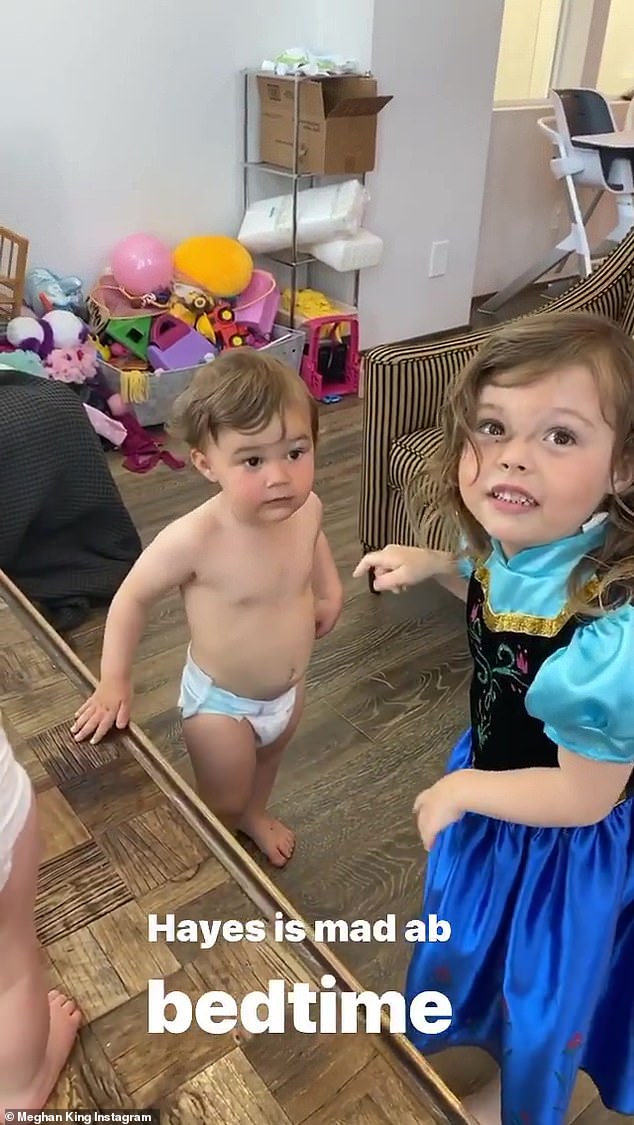 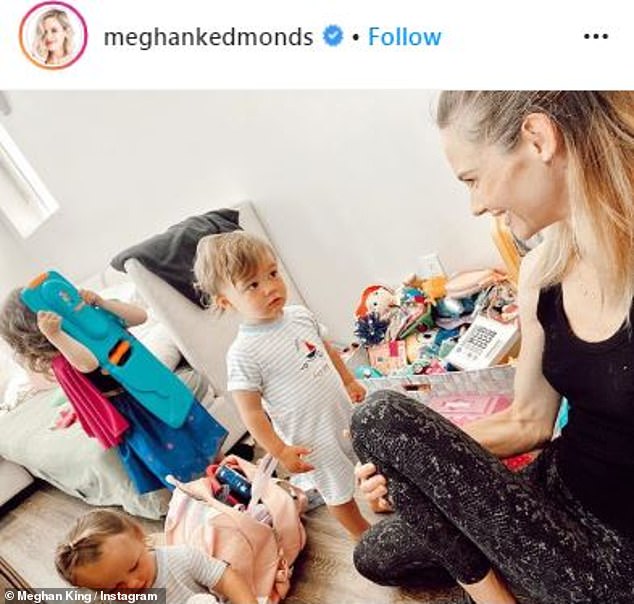 Meghan says: ‘I’m worn out. In addition to the mental toll this crazy time has taken on all of us moms, the anxiety is taking a toll on my physical health.’

‘It was the first time I’d experienced a therapeutic plateau, and I felt very alone. Even special needs mamas don’t talk about these plateaus… so I was completely blindsided by this demoralizing development.

‘But that demoralization was months ago. February. Now we are in May. And Hart has regressed. That’s right, Hart’s current status is below the level of that depressing plateau I just told you about. His balance is much worse than it was at the end of 2019.’

Meghan goes on to say she struggles to work, with the noise that her children make making it impossible to record her podcast.

On top of that, Meghan says she has very little personal space because daughter Aspen shares her bed with her.

‘I have three bedrooms in my LA rental. The nanny takes one, the twins take another, and I take the third one… with Aspen. Prior to this bed-sharing situation, I had her sleeping in my walk-in closet, but inevitably I granted the permanent transition to co-sleeping.. It’s now been six months.’ 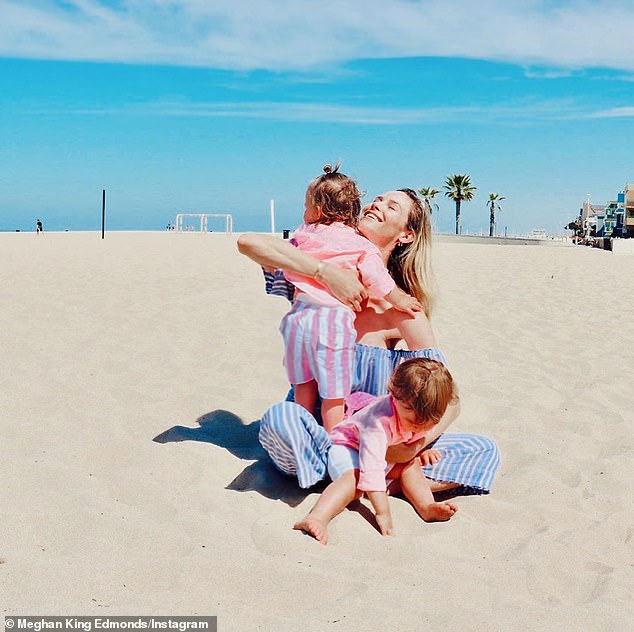 Time to decompress: The former RHOC star finally made it to the beach with her kids this week amid the coronavirus quarantine

They split last year after Meghan accused the former MLB player of behaving inappropriately with their children’s nanny.

Jim and the nanny denied the allegations but he filed for divorce on October 25, 2019, the day after their fifth anniversary.

Kortnie is now living with Jim in the St. Louis, Missouri home Jim and Meghan built together.

The duo have been seen working out together and drinking smoothies made in the gleaming spacious kitchen, sharing glimpses on their social media. 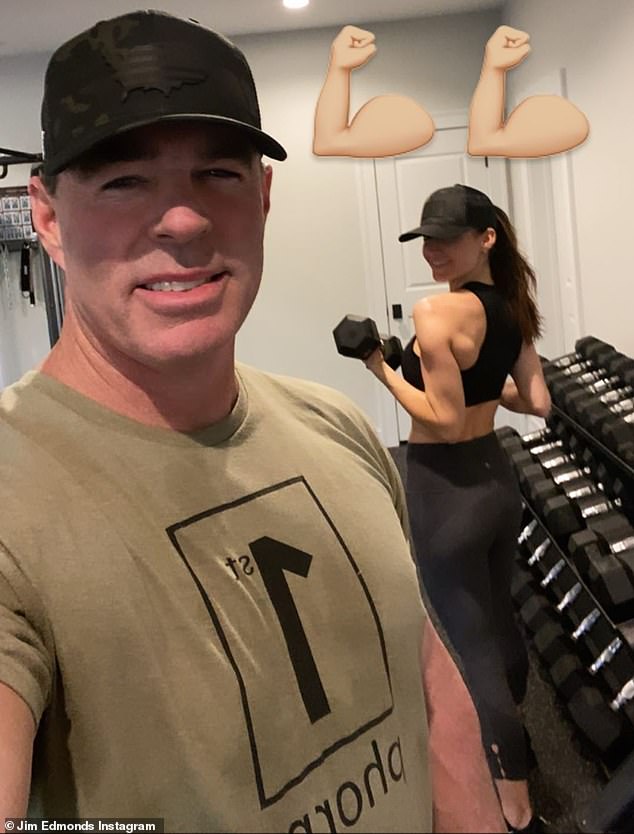