Meghan King Edmonds has been in a bit of hot water lately over some of her parental choices.

But the 35-year-old reality star was determined to let keyboard warriors know their recent criticism has not phased her when she shared a lingerie-clad snapshot to Instagram on Saturday featuring a scalding caption.

‘PS To all the “Nancy’s in Nebraska”: as you become overly concerned with a stranger just remember ima still do me,’ wrote an impassioned Edmonds. 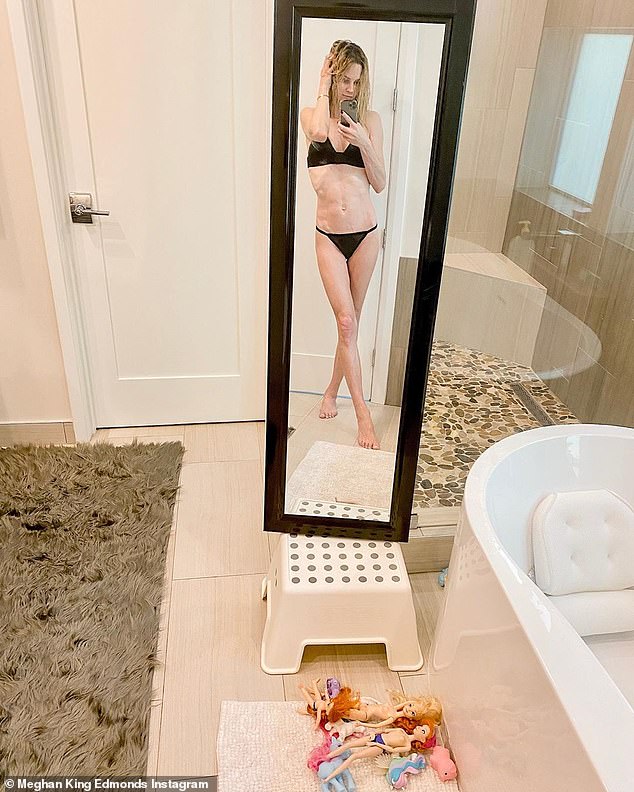 Over it: Meghan King Edmonds took to her Instagram on Saturday to fire back at social media trolls that have continually critiqued the reality star’s approach to motherhood

In the photo posted by the former Real Housewives of Orange County starlet, she can be seen standing before a lengthy mirror in the bathroom she shared with her soon-to-be ex husband Jim Edmonds.

She posed with her hand in her hair and her slender frame in only a bra and panties, as she stood before a pile of her daughter Aspen’s dolls.

‘Brb gotta go live my best life byeeeee,’ concluded Edmonds who is a mother of three. 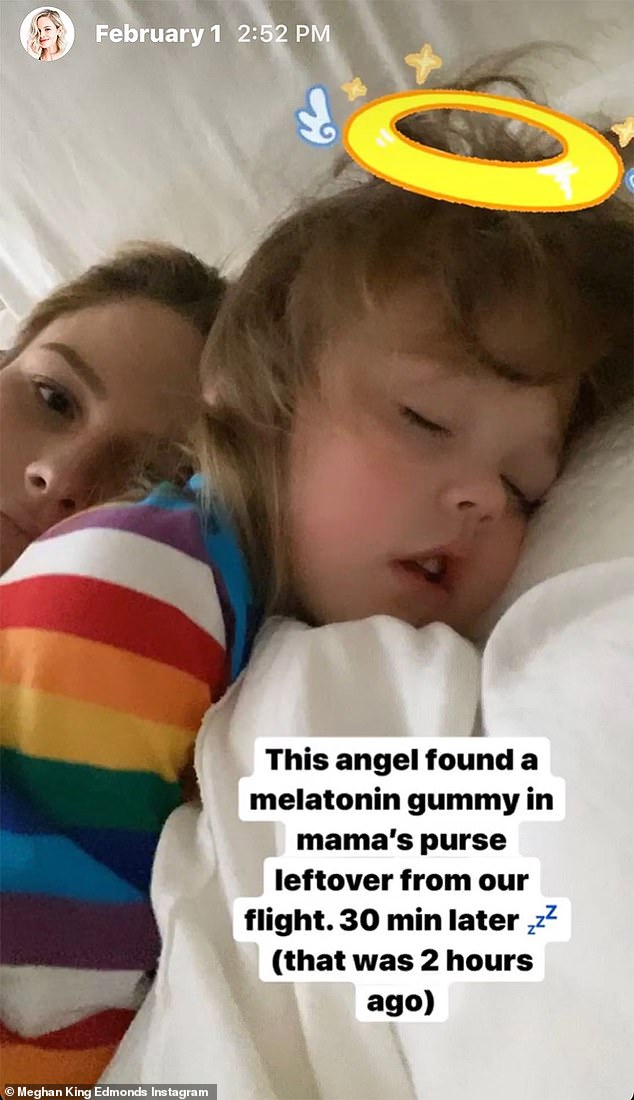 ‘Completely safe’: Meghan King Edmonds has defended her decision to give her three-year-old daughter a melatonin gummy

Edmonds was recently called out by the ‘parent police,’ who attacked her last week over her 3-year-old daughter Aspen ‘accidentally’ consuming a melatonin gummy.

Her former The Real Housewives of Orange County co-stars even wrote publicly of their support for Meghan. 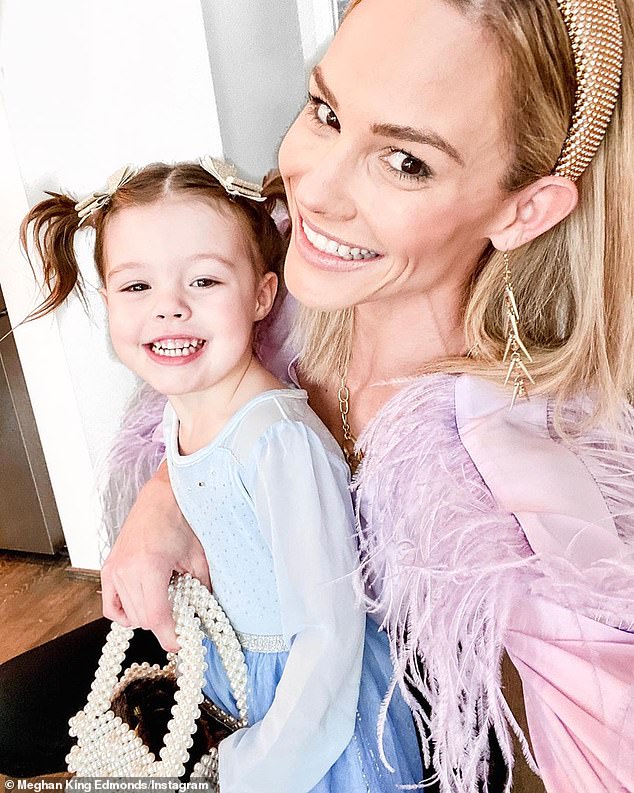 Clapping back: Meghan explained in her statement, ‘It was a melatonin gummy for kids, not a sleeping pill and certainly not for an adult. It is completely safe’ 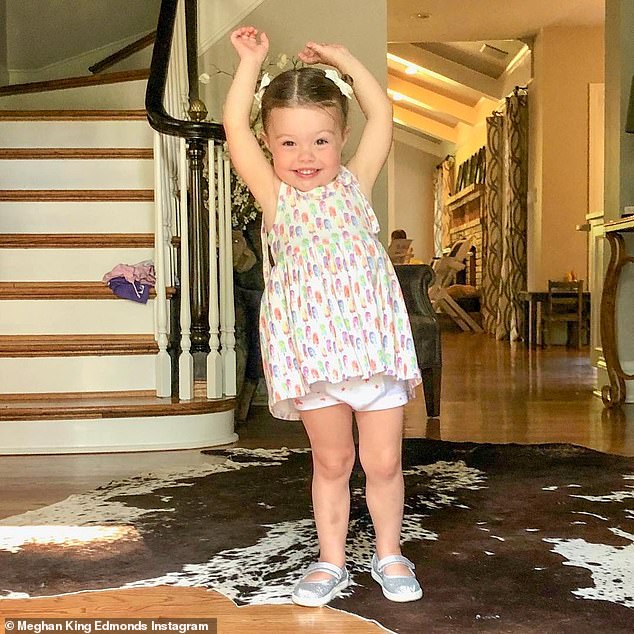 Too young? Keyboard warriors waged war with the mom over the appropriateness of her actions; Aspen pictured in Edmonds’ home via Instagram in July of 2019

Tamra Judge, who announced she’d be leaving the reality show, led the way by commenting, ‘You look hot mama. Who cares what the haters gonna say.’

A remaining cast member on the show, Braunwyn Windham-Burke, opted to voice her support through a series of raised hand emojis.

She then elaborated on her perspective, when she replied to fan feedback explaining hat ‘women can be more than moms.’ 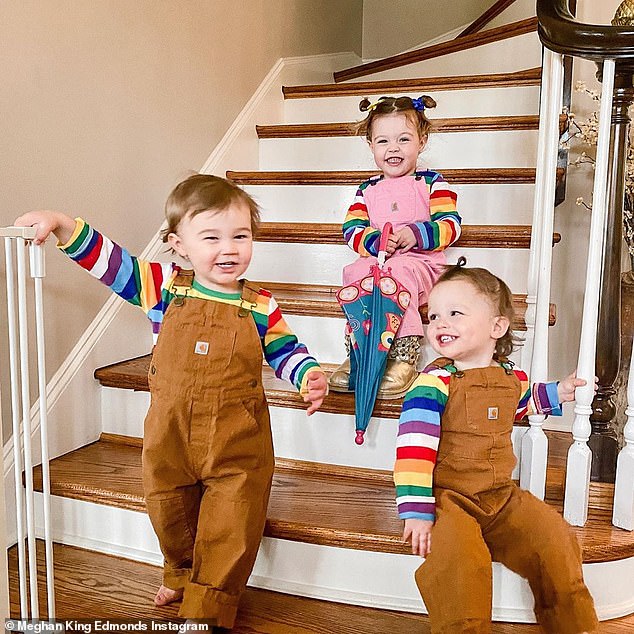 Parenting in question: Edmonds is mom to twin boys, Hart and Hayes, 1, as well as three-year-old Aspen

Edmonds band of housewives clearly took her post as an edgy stand against ‘mom shaming.’

Edmonds recent ‘mom shaming’ was partly her own doing, since she decided to share a picture of her melatonin-induced daughter Aspen sleeping to her Instagram Stories.

The post featured a caption explaining that she had allowed the toddler to take a sleep aid and had played off the ordeal like it was nothing to be concerned about. 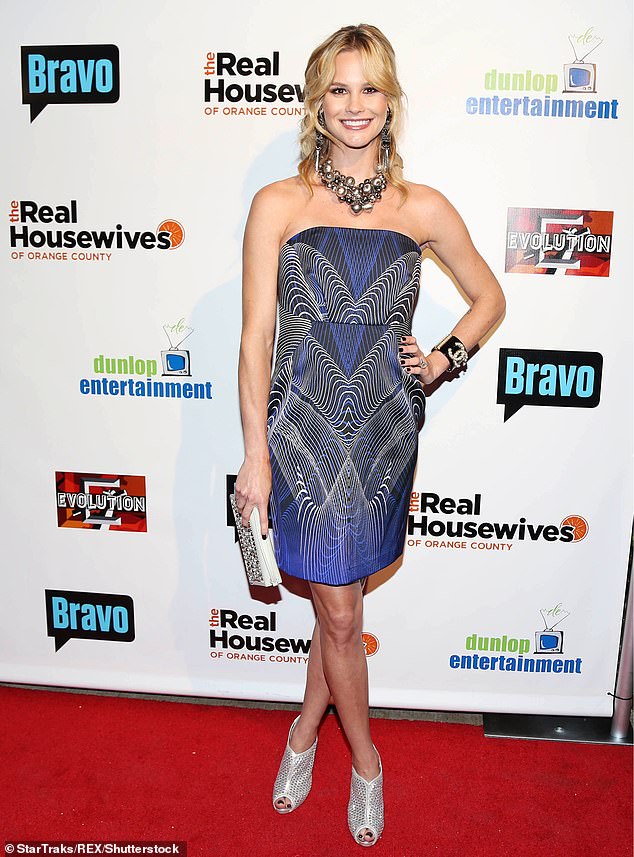 Rise to stardom: Edmonds rose to fame when she entered the Brave reality series The Real Houswives of Orange County in 2015 during the show’s 10th season; pictured here on the red carpet for the show’s 10-year celebration in 2016

‘It is completely safe,’ the native Missourian told People in a statement on the scandal.

The post in question was captioned:  ‘This angel found a melatonin gummy in mama’s purse leftover from our flight,’ along with a picture of the sleeping daughter she shares with ex Jim Edmonds.

She then said that Aspen fell asleep a half an hour after consuming the ‘natural’ sleep remedy. 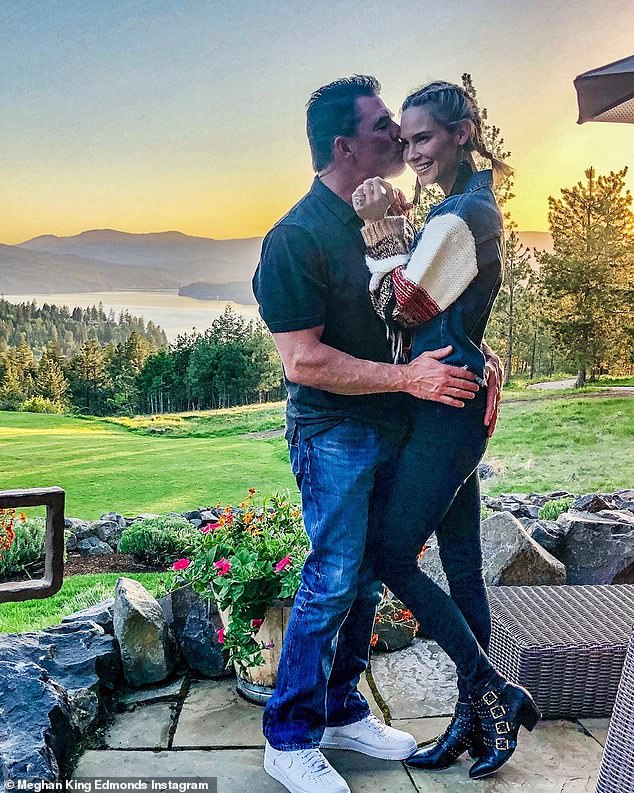 Ex appeal: Currently, the mother-of-three is in the middle of a divorce with her former MLB star husband Jim Edmonds following their October split

According to Meghan, Aspen was still sound asleep two hours after she first swallowed the gummy.

Melatonin is a hormone supplement meant to help aid in sleep.

Meghan explained in her statement, ‘It was a melatonin gummy for kids, not a sleeping pill and certainly not for an adult. It is completely safe.’

‘Aspen found the one little gummy in a little baggie while rummaging through my purse,’ continued the mother-of-three.

‘She asked me if she could have it and since it was nap time I told her ‘Yes.’ In fact, the recommended dosage for this particular brand of melatonin for kids is 2 gummies and I let her have one.’ 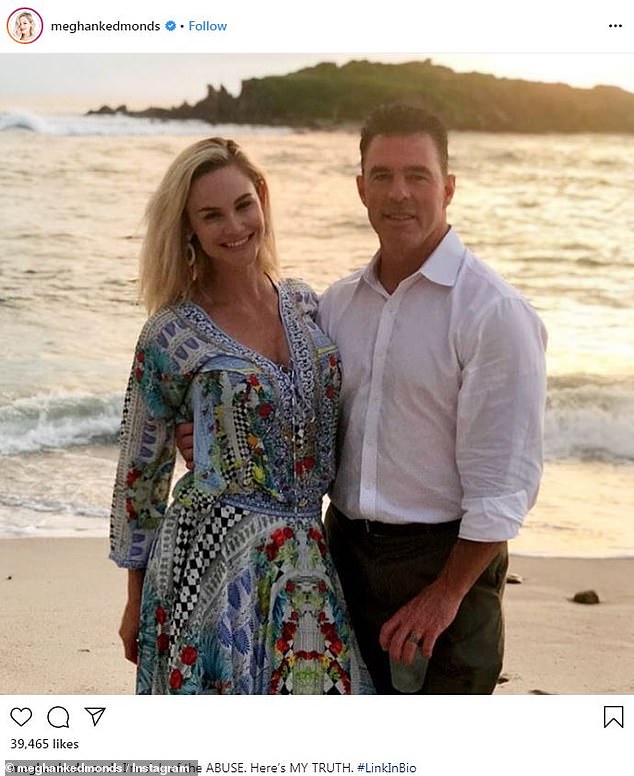 The RHOC star also denied deleting the post from her social media.

‘I never deleted the post, it stayed on my Instagram Stories for the full 24 hours because nothing wrong or dangerous happened.’

‘Aspen was fully supervised by me the entire time and didn’t take the gummy without my express permission.’ 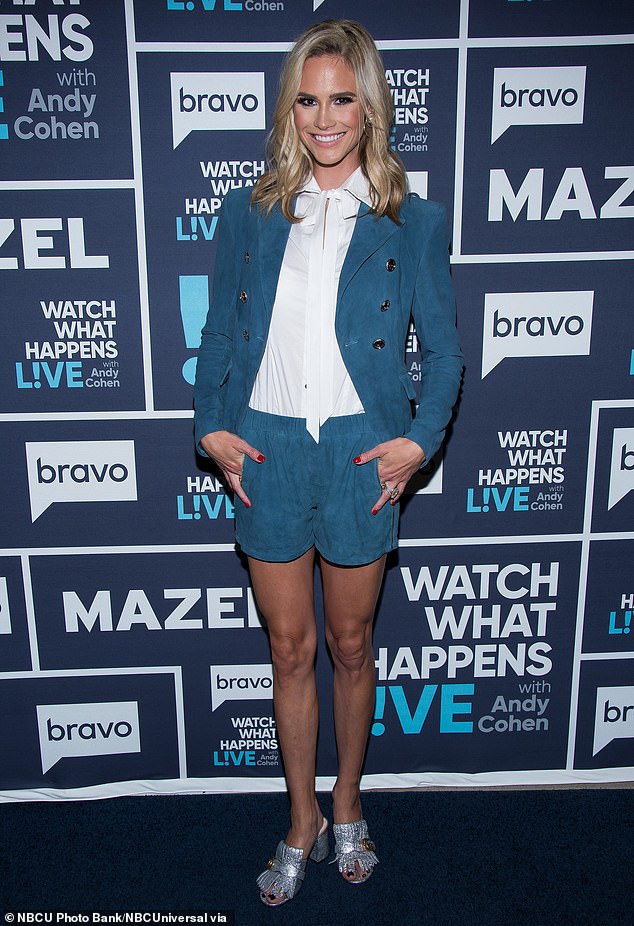 Bye bye: Meghan ended her reality tv show stint near the end of 2018; pictured during a step and repeat for Watch What Happens Live with Andy Cohen

Continued King Edmonds: ‘The post was cheekier because it’s Instagram that’s what social media is about: a glimpse into our lives — not usually the full story.’

‘But, since the parent police are out in full force, I’ve felt compelled to give a full explanation to this silliness.’

Currently, the mother-of-three is in the middle of a divorce with her former MLB star husband Jim following their October split. 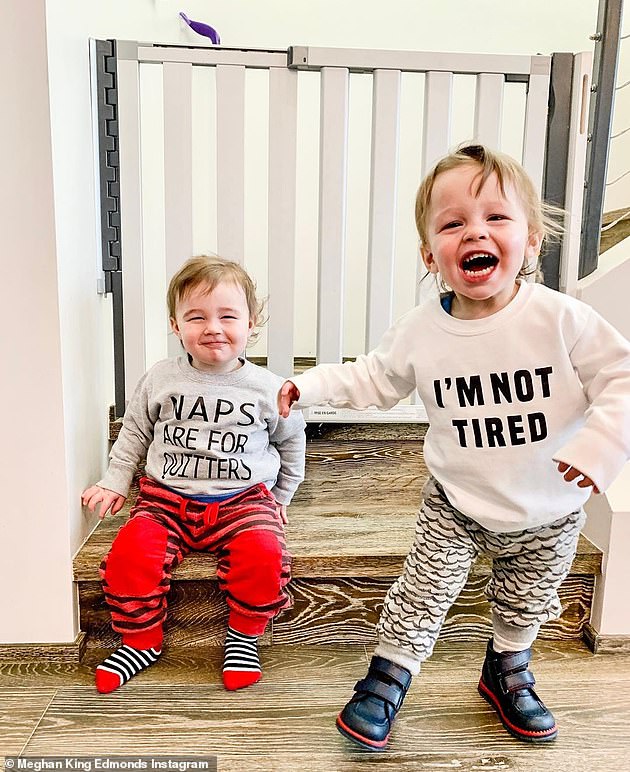 Reports allege that during their five year marriage, Jim was unfaithful and cheated on Meghan with their nanny, Carly Wilson.

Both Jim and the nanny have denied that was ever the case. But, while the affair may all be unknown, Jim has since moved on to Playboy model Kortnie O’Connor.

The two have been spending more and more time together and recently jetted off to Cabo San Lucas, Mexico for a wedding together.

Apart from Aspen, the former couple also share twins Hayes and Hart, one.