The Duke and Duchess of Sussex travelled to New York where Prince Harry delivered a keynote address, covering everything from climate change, abortion rights in the USA, and his love for his wife Meghan Markle. But Loose Women host Jane Moore has called the royals’ appearance into question.

Jane, 60, has since claimed Harry looked “miserable” and unaware the cameras were on him while Meghan appeared the opposite.

Ahead of giving his speech to the General Assembly, Harry, 37, and Meghan, 40, were pictured seated together.

The Duchess sported a knee-length black dress teamed with heels while the Duke looked smart in a suit.

During his delivery, the royal issued a thinly-veiled critique of the US Supreme Court’s decision to end abortion rights during a speech marking Nelson Mandela International Day. 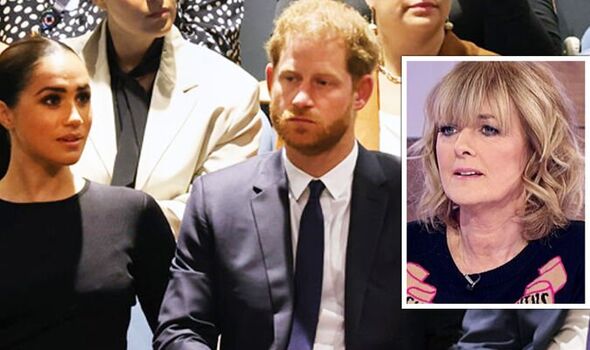 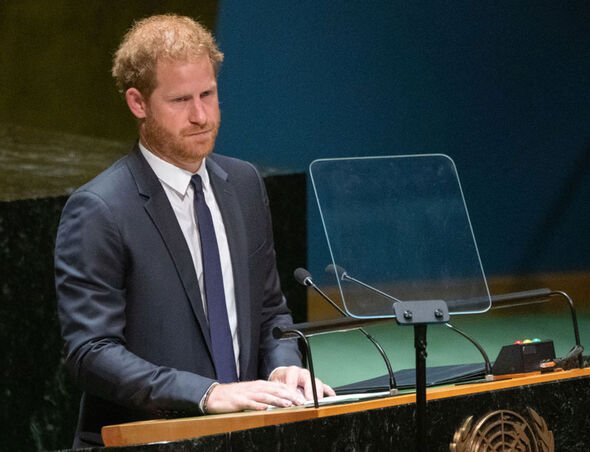 He also addressed issues affecting the world including the negative impact of climate change and global warming.

Writing in her latest coloumn, the Loose Women panellist addressed the couple’s latest appearance in NYC weeks after the Queen’s Platinum Jubilee celebrations.

She wrote: “They say a picture can paint a thousand words.

“In which case, this one of Harry and Meghan at a Mandela Day event paints the impression that she knows where the cameras are, while her husband stares miserably into the middle distance seemingly oblivious to his surroundings.” 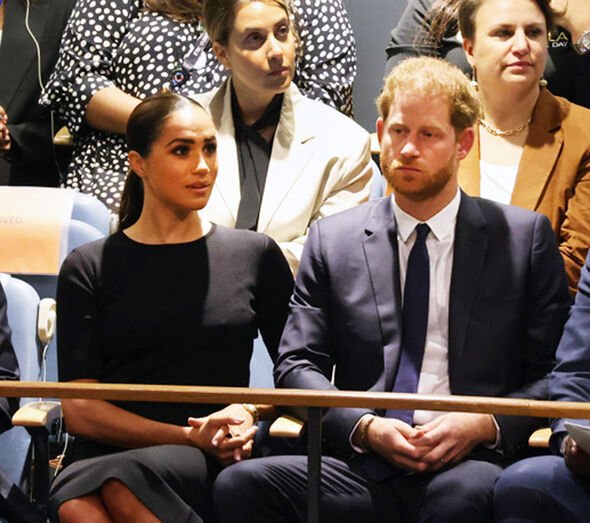 Meghan and Harry arrived in the Big Apple to address the General Assembly to celebrate the historic anti-apartheid activist and former South African President Mr Mandela.

He told the assembly the world had come to know Mr Mandela through photographs of a man who, “even when confronting unimaginable cruelty and injustice, almost always had a smile on his face”.

The Duke then spoke of a cherished photograph of his mother Princess Diana taken with Mr Mandela in March 1997, five months before her death.

“On my wall, and in my heart every day, is an image of my mother and Mandela meeting in Cape Town in 1997,” Prince Harry said.

Mariah Carey in busty display as she dips in sea wearing a gown[LATEST]
Minnie Driver shows off natural beauty after addressing surgery[PICTURES]
Ulrika Jonsson, 54, strips off to cook NUDE in sideboob-baring pic[INSTAGRAM]

Harry was later pictured following his UN speech where he looked relaxed while out in New York.

The Duke and Duchess of Sussex enjoyed a date night with friends Monday evening after appearing for a special address at the UN.

The couple enjoyed dinner at Locanda Verde, which is co-owned by actor Robert De Niro.

Meghan and Harry ate with their friends in the private section of the restaurant.

The group reportedly stayed for around three hours before Harry escorted Meghan to the car when leaving.

Harry was dressed in a navy blue shirt, while Meghan wore a black and white jumpsuit paired with black stilettos.

The couple reportedly arrived in NYC with their children Archie and Lillibet.

During his UN speech, Harry gushed over Meghan, where he also spoke about his love of Africa since his first visit at age 13.

He said: “For most of my life, it has been my lifeline, a place where I found peace and healing time and time again.

“It’s where I felt closest to my mother and sought solace after she died, and where I knew I had found a soulmate in my wife. And it’s why so much of my work is based there.”