The rap superstar looked incredible in a tiny multicoloured two piece for her latest photos, which barely concealed her ample assets. 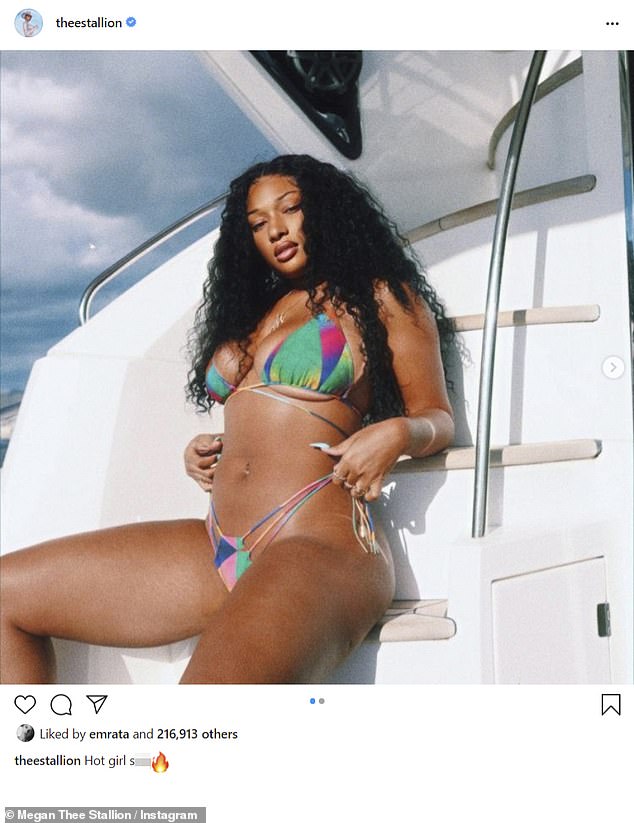 Posing on the back of a yacht, Megan showed off nearly every inch of her jaw-dropping curves.

The triangle top of her bikini barely concealed her modesty, while the high-rise bottoms flaunted her long legs.

The chart-star also shared a close-up of her cleavage which also showed off her sparkling initial necklace and her manicure, which matched her minuscule bikini. 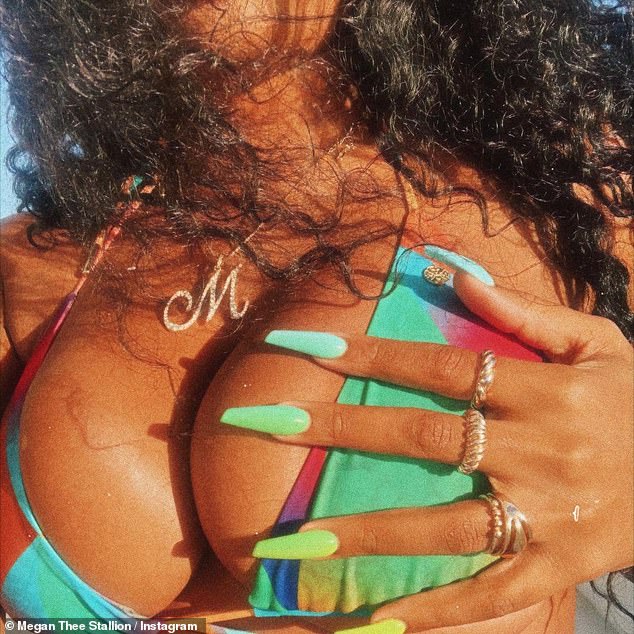 Ready for her close-up: Posing on the back of a yacht, Megan showed off nearly every inch of her jaw-dropping curves 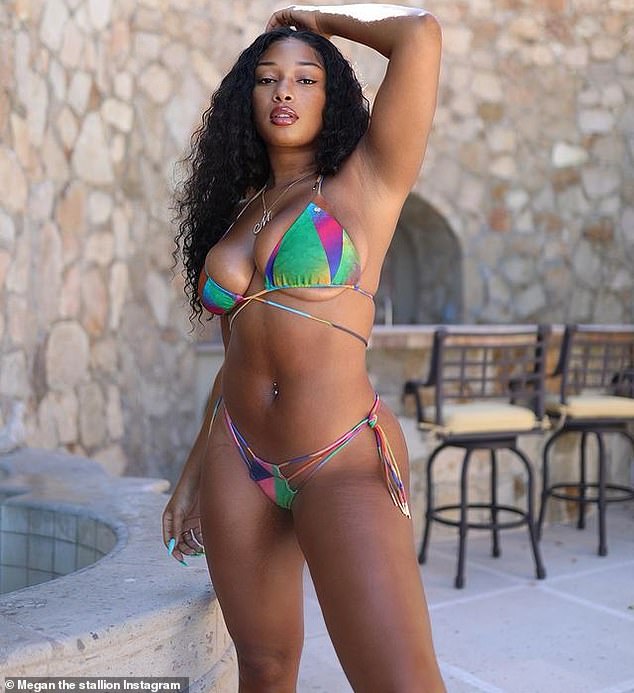 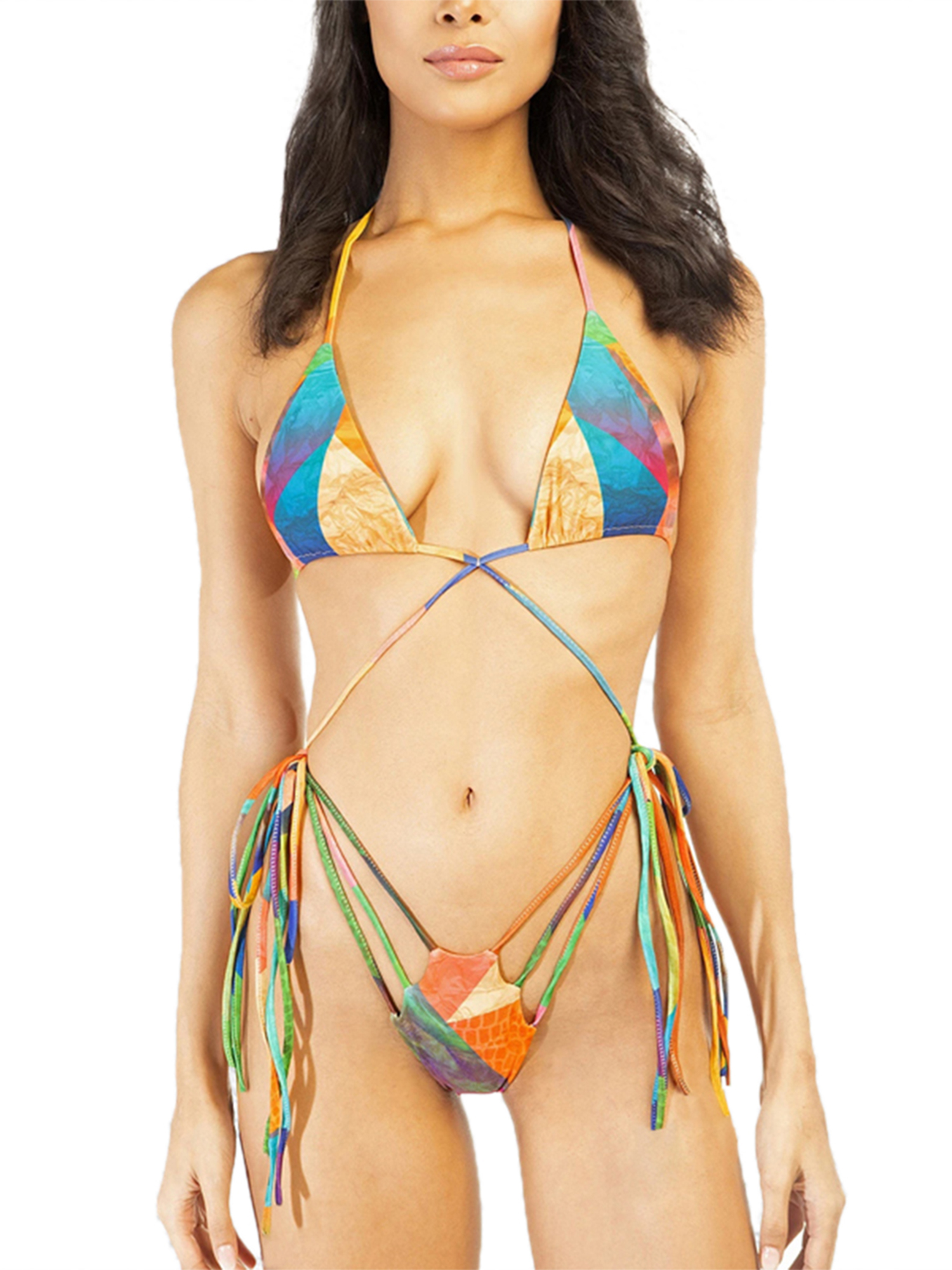 Megan is closing out a roller-coaster year – she had professional triumphs including hit singles with Beyonce and Cardi B, but she also was shot in her feet this July.

In late August Megan broke her silence to publicly name Tory Lanez as the man who shot her, having previously remained mum about the alleged culprit.

Before she made her accusation Tory had already been charged for having had a concealed weapon at the time of the incident. 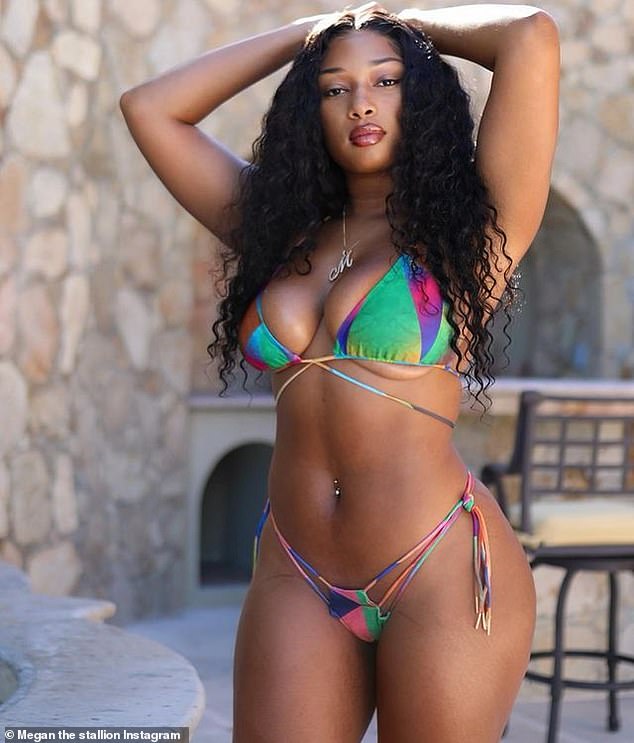 Looking fab: The 25-year-old rap star showed off her taut midriff and ample endowments in a barely-there tie-dye swimsuit

‘Since you’re all so worried about it, yes, this n**** Tory shot me,’ she said while going Live on Instagram this Thursday.

‘You shot me and you got got your publicist and your people going to these blogs lying and s***. Stop lying. Why lie.’

Megan asserted that she did not tell cops the full story on the night of the incident because they were ‘aggressive’ and she ‘didn’t want the police to shoot me.’

Sensational: Her glittering belly button ring was on display as she pulled her best smoldering supermodel stare in her new images

She said that although she initially refrained from telling the cops the truth to ‘spare’ Tory she had become ‘tired’ of the rumors circulating about her.

Tory allegedly shot her in both feet in the small hours of the morning on July 12 outside a party in the Hollywood Hills.

Megan was attempting to exit the SUV she and Tory were in only for him to reportedly fire his gun, according to TMZ. 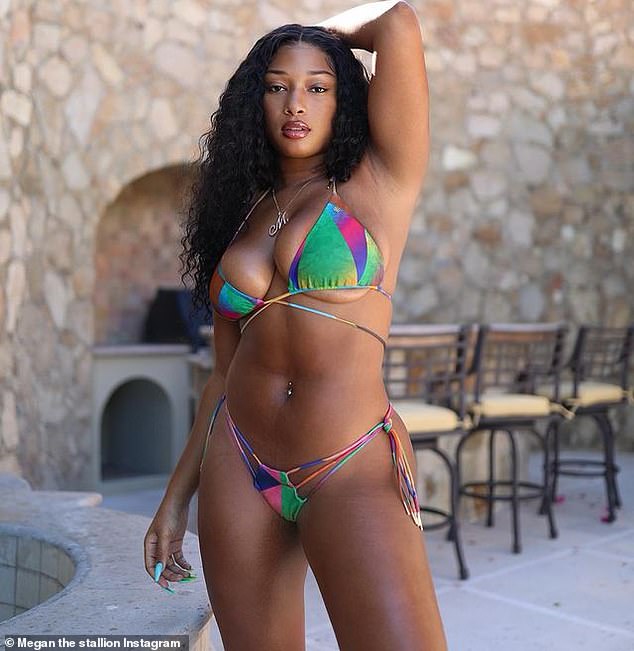 Hello, gorgeous: Sweeping her hair from her face, she gave viewers a glimpse of her long electric blue fingernails and accentuated her screen siren features with makeup

In aerial footage that quickly went viral Megan could be seen leaving bloody footprints on the sidewalk and keeping her hands up for the police, whom she has said drove her to the hospital to have her injuries treated.

Tory has pleaded not guilty to the felony charges against him – assault with a semiautomatic firearm and having a loaded, unregistered firearm in a vehicle.

If he is convicted of the crimes he has been accused of, the 28-year-old rapper could go to jail for more than 22 years.