The rapper, 32, and the actress, 36, posed together for several photos at the happy ceremony.

Kelly wore a blue leopard print suit and a pair of black loafers that added a couple inches to his already impressive 6 foot, 4 inch frame. 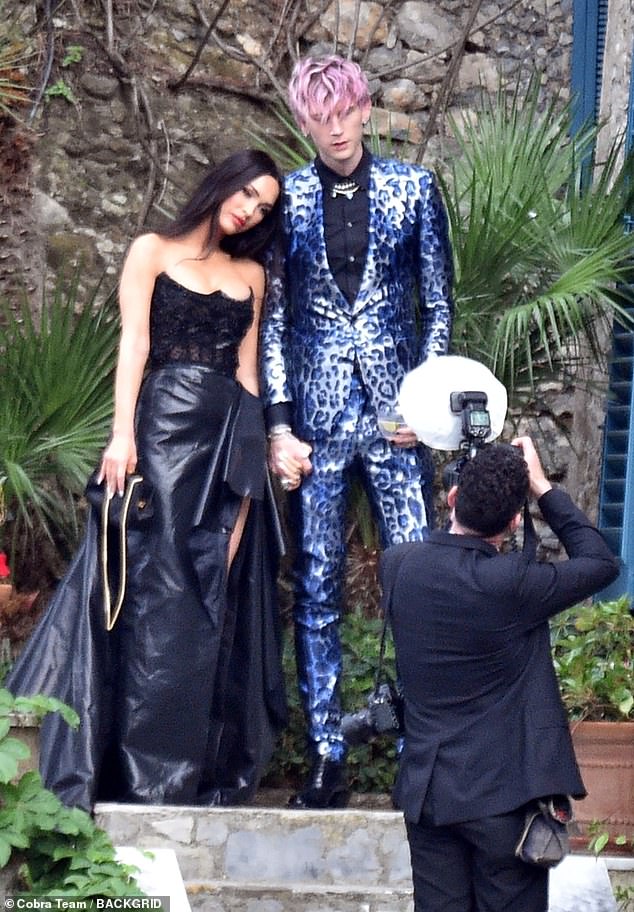 The My Ex’s Best Friend singer’s hair was dyed its now trademark pink at the event.

Fox wore a black off the shoulder gown that pushed up her cleavage and had a skirt that was slit down the left side revealing the entirety of Fox’s strong leg.

She walked in tall high heels and needed a bit of help from Kelly getting down the stairs because of them.

Fox appeared tired, needing to rest her head on Kelly’s shoulder for at least one of their photos together. 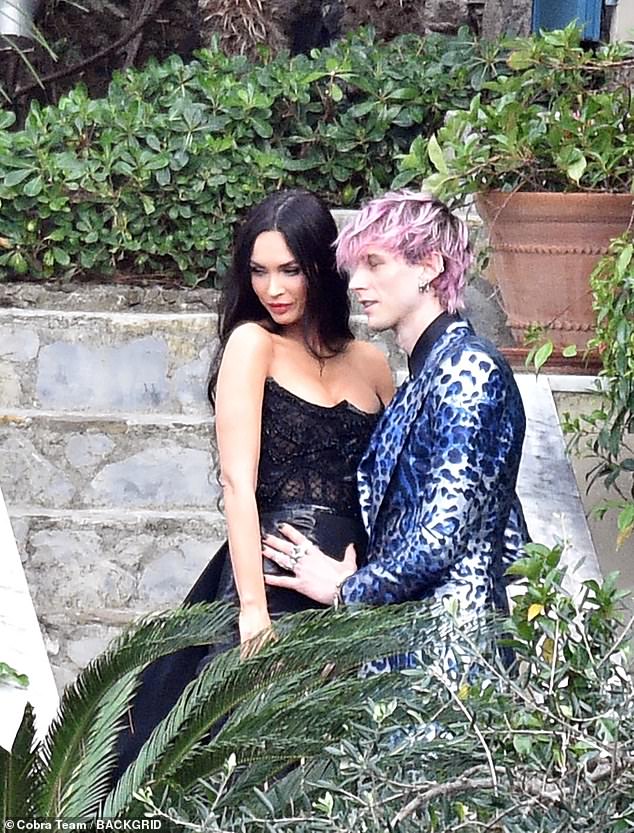 Getting cozy: The rapper, 32, and the actress, 36, posed together for several photos at the happy ceremony 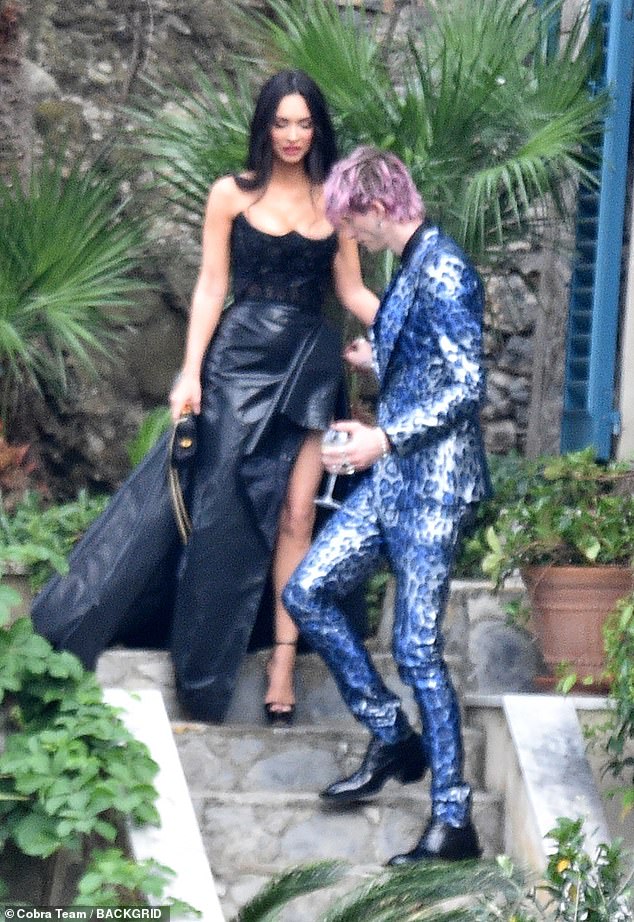 Lending a hand: She walked in tall high heels and needed a bit of help from Kelly getting down the stairs because of them 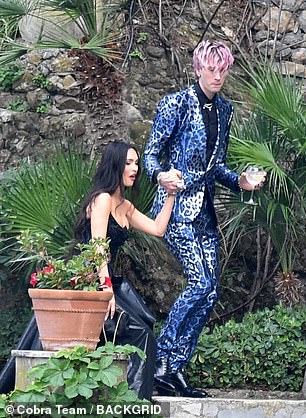 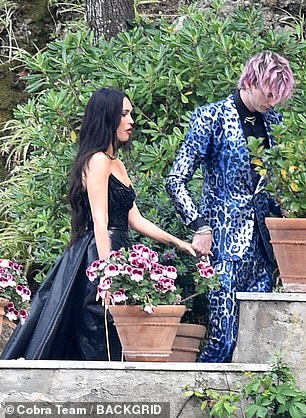 Loving: Fox and Kelly held hands as they walked at the event while Kelly had a drink in his other hand

Kelly and Fox seemed to be having a serious discussion earlier in the day in a thicket of trees at the event.

Kelly’s head was bowed solemnly while Fox spoke to him.

While they were happy and loved up later on in the day, they showed up at different times during the day with Kelly arriving via boat after Fox. 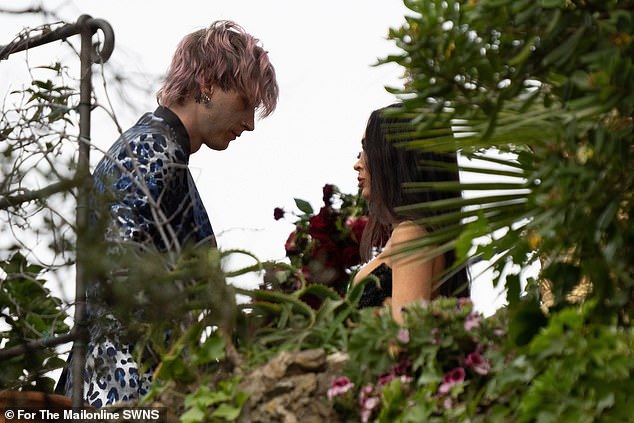 A real conversation? Kelly and Fox seemed to be having a serious discussion earlier in the day in a thicket of trees at the event 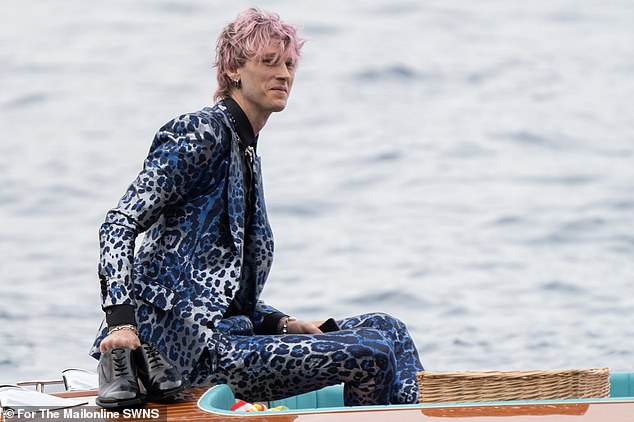 Arriving alone? While they were happy and loved up later on in the day, they showed up at different times during the day with Kelly arriving via boat after Fox 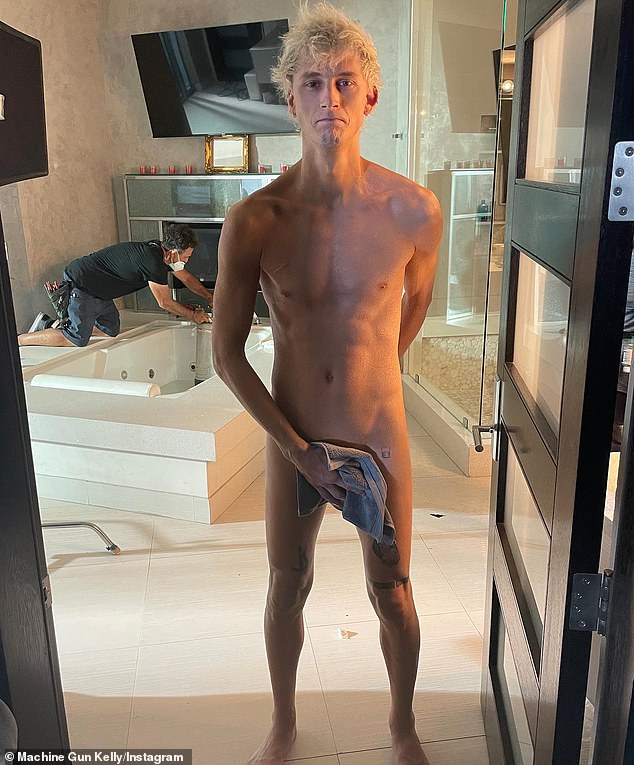 Wow: The duo’s appearance at the event for their close friends came just a day after Travis posted a naked photo of himself from the set of his new stoner comedy Good Mourning

The duo’s appearance at the event for their close friends Travis and Kourtney came just a day after Travis posted a naked photo of himself from the set of his new stoner comedy Good Mourning.

He made sure to hold a small towel over his crotch in order to prevent violating Instagram’s Community Guidelines about nudity.

The fiancé of Megan Fox quipped in his caption: ‘i did 5 whole sit ups (and 200 blunts) to prep for my role in Good Mourning.’

Kelly and Mod Sun co-wrote, co-directed and acted in the movie, which dropped this Saturday, the same day Kelly promoted it with a nude on Instagram. 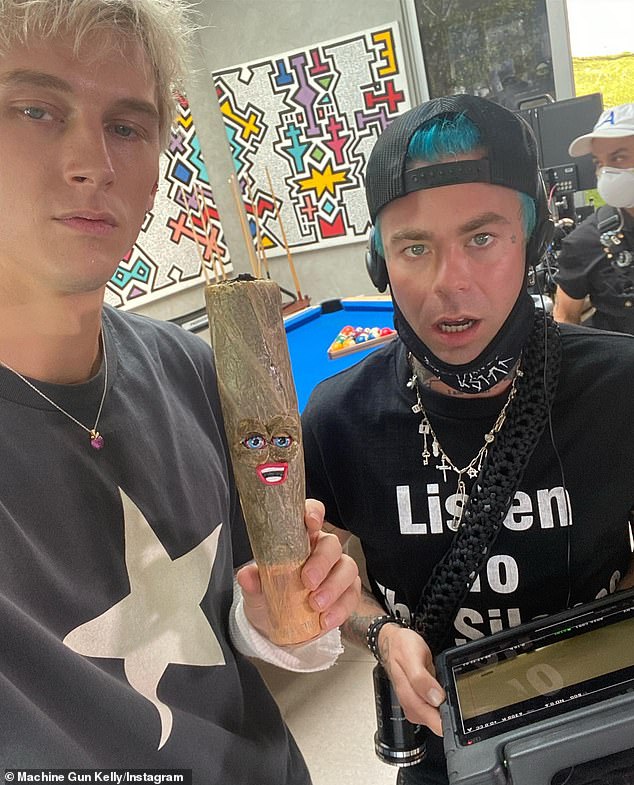 Collaborators: Kelly and Mod Sun co-wrote, co-directed and acted in the movie, which dropped this Saturday, the same day Kelly promoted it with a nude on Instagram 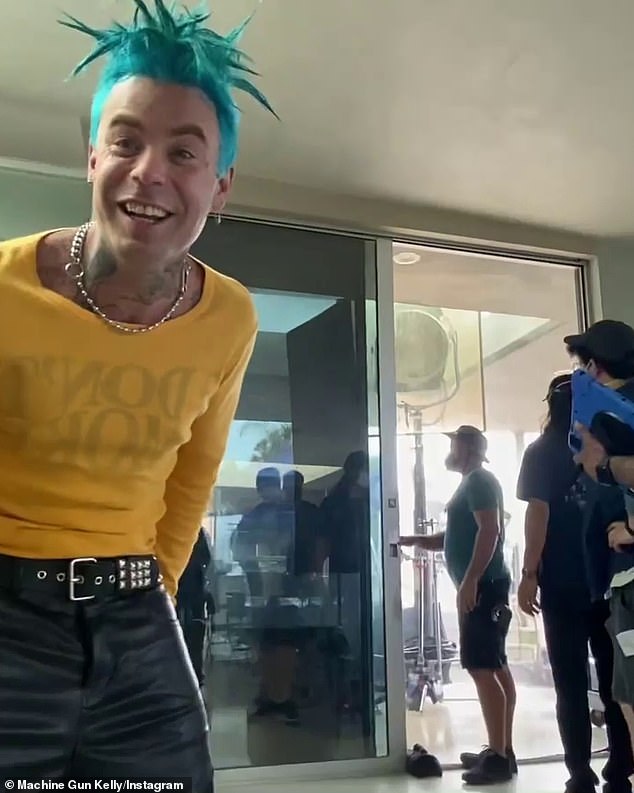 There’s Mod: The naked photo was part of a rollicking Instagram album that let Kelly’s more than nine and a half million followers get a glimpse of the behind-the-scenes process 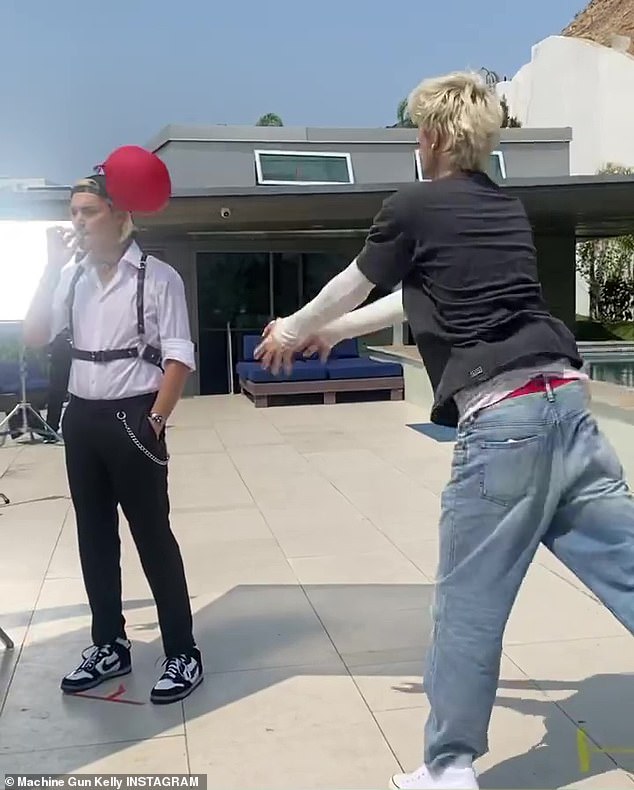 Hard at work: In one video, Kelly could be seen performing a scene in which he a massive water balloon at his co-star Zach Villa, who yelped upon impact

The naked photo was part of a rollicking Instagram album that let his more than nine and a half million followers get a glimpse of the behind-the-scenes process.

In one video, Kelly could be seen performing a scene in which he launched a massive water balloon at his co-star Zach Villa, who yelped upon impact.

Another entertaining clip was of another of Kelly’s co-stars, Boo Johnson, talking to a stuffed toy of a lobster smoking a joint while enjoying one himself.

Kelly made sure to include a snap of himself and Mod with Danny Trejo, one of the array of celebrities who were secured to deliver cameos for the film.

Fox herself features in the movie, along with such famous names as Whitney Cummings, Dennis Rodman, Tom Arnold, Pete Davidson and Amber Rose.