EXCLUSIVE: Megan Fox looks cosy with smitten Machine Gun Kelly as they leave his Hollywood mansion… after he told the world he’s ‘in love’ with her after just weeks of dating

New power couple Megan Fox and Machine Gun Kelly seem to be inseparable as they were seen together again on Wednesday evening at sunset.

The lovebirds, who co-starred in his steamy Bloody Valentine music video in May, were walking to her car outside his Hollywood mansion.

This comes a day after the 30-year-old rapper said on social media that he was ‘in love’ with the Jennifer’s Body star while they were enjoying a cozy sushi picnic in the hills of Los Angeles. 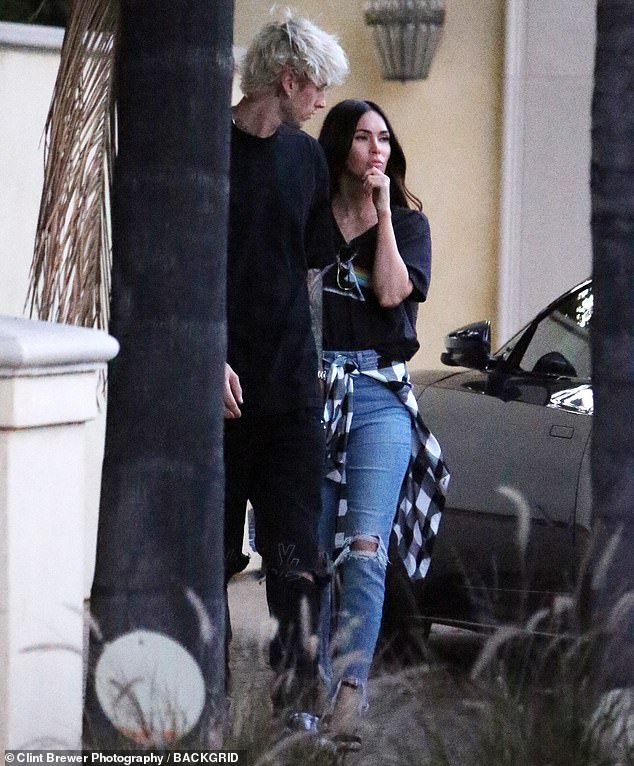 So happy together: New power couple Megan Fox and Machine Gun Kelly seem to be inseparable as they were seen together again on Wednesday evening at sunset 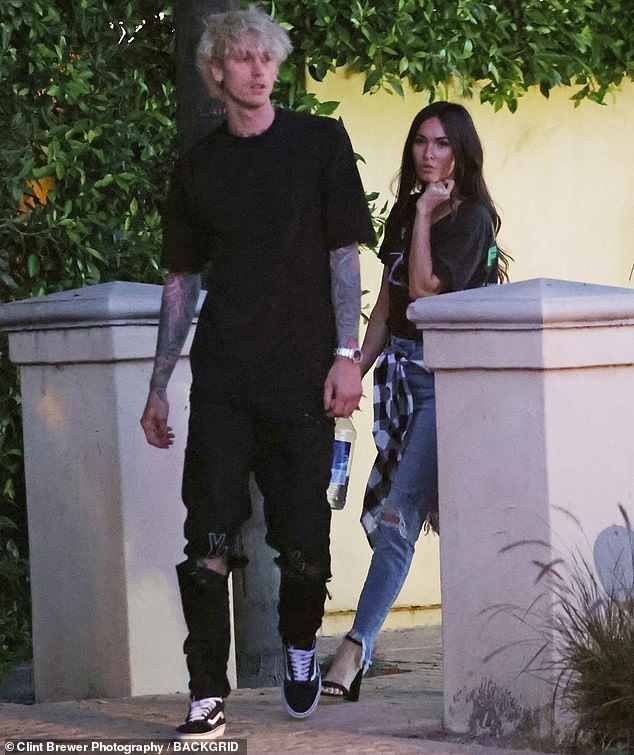 In step: The lovebirds, who co-starred in his steamy Bloody Valentine music video in May, were walking side by side outside his Hollywood mansion 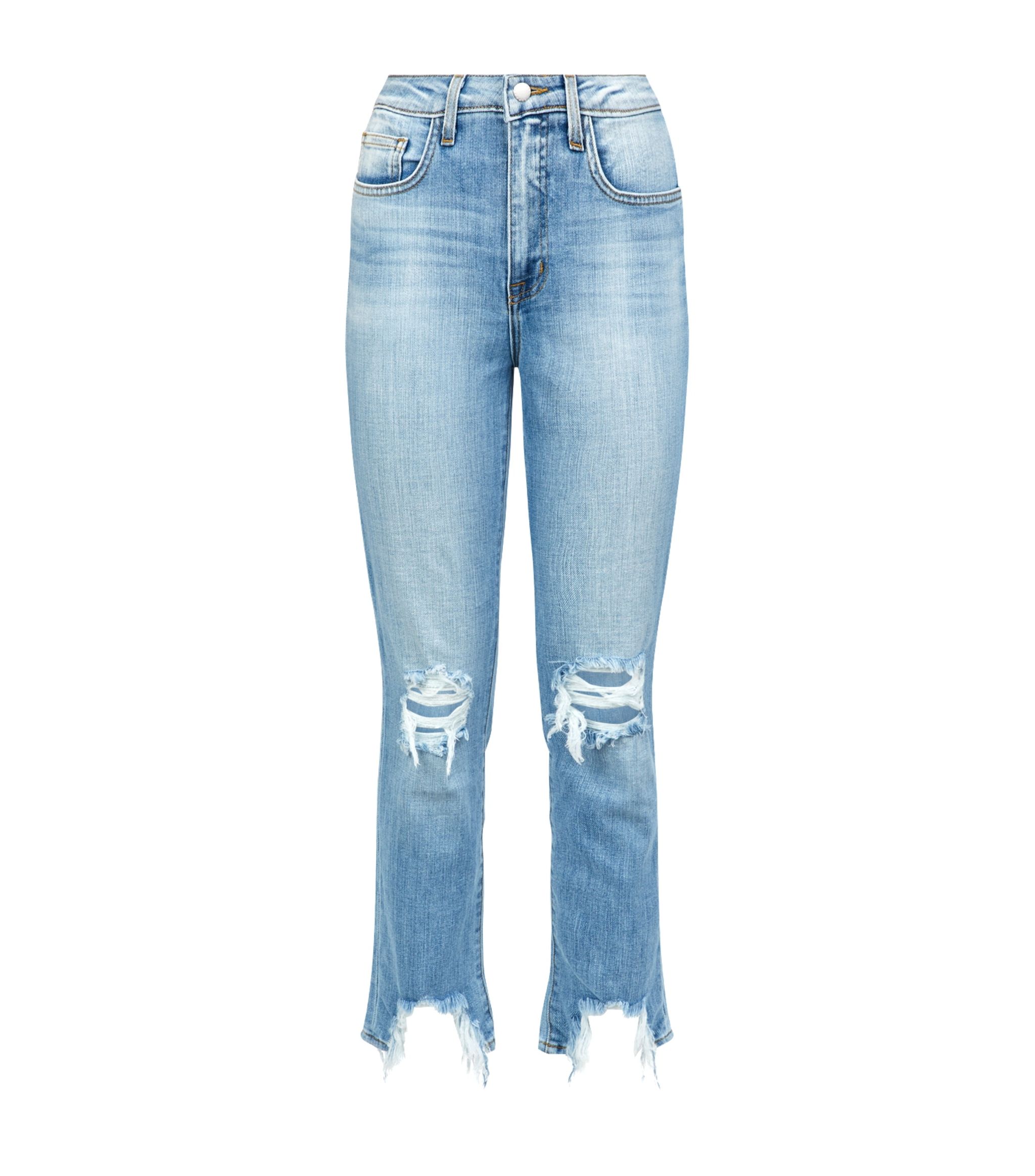 Megan interestingly wore a Pink Floyd T-shirt, which her estranged husband Brian Austin Green also had on this week when he stepped out with bombshell Courtney Stodden.

The Transformers star had on skintight, ripped blue jeans with a black-and-white flannel shirt tied around her waist and strappy black heels. She wore her raven hair down over her shoulders.

Fox held on to a water bottle as she had a backpack on one shoulder.

Kelly wore a black T-shirt that showed off his arm tattoos as well as black, ripped jeans and black and white sneakers with a large metal band watch.

Her beau doted on her as he walked her to a car before saying goodbye to the cover girl. 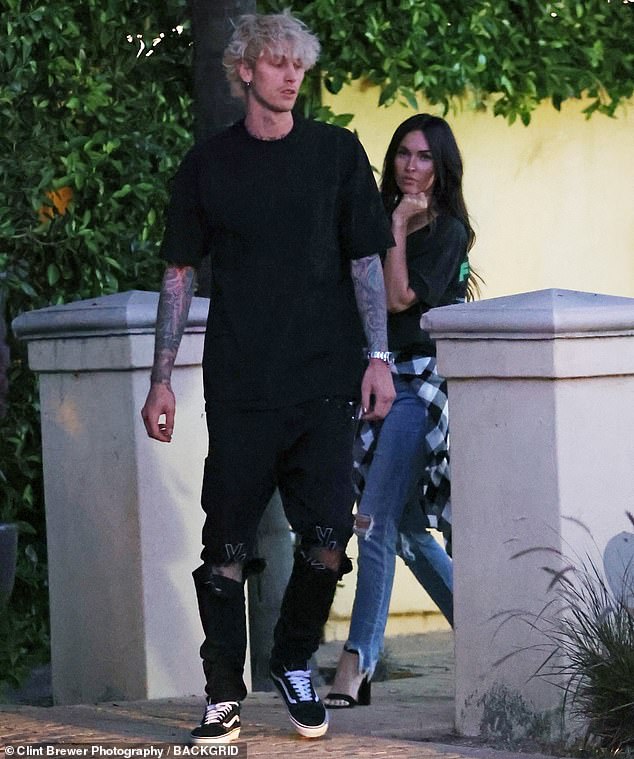 Megan fashion: The Transformers star had on skintight, ripped blue jeans with a flannel shirt tied around her waist and wore her raven hair down 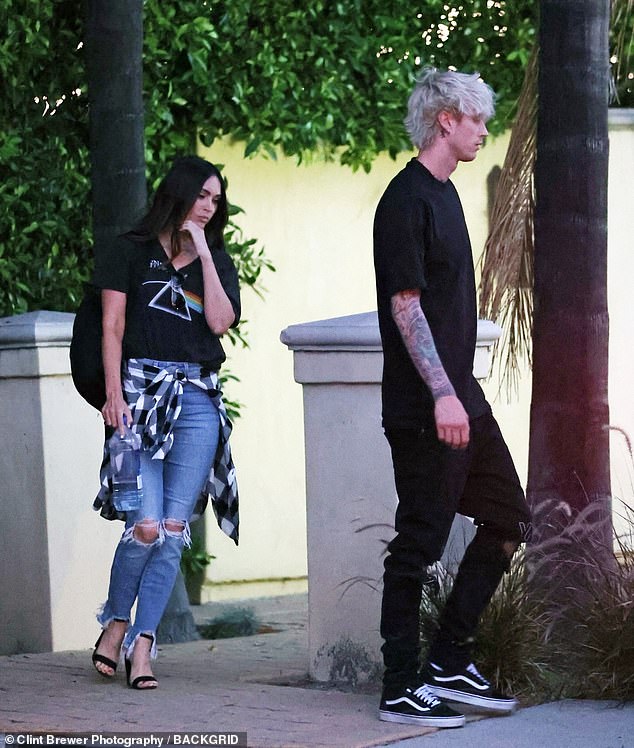 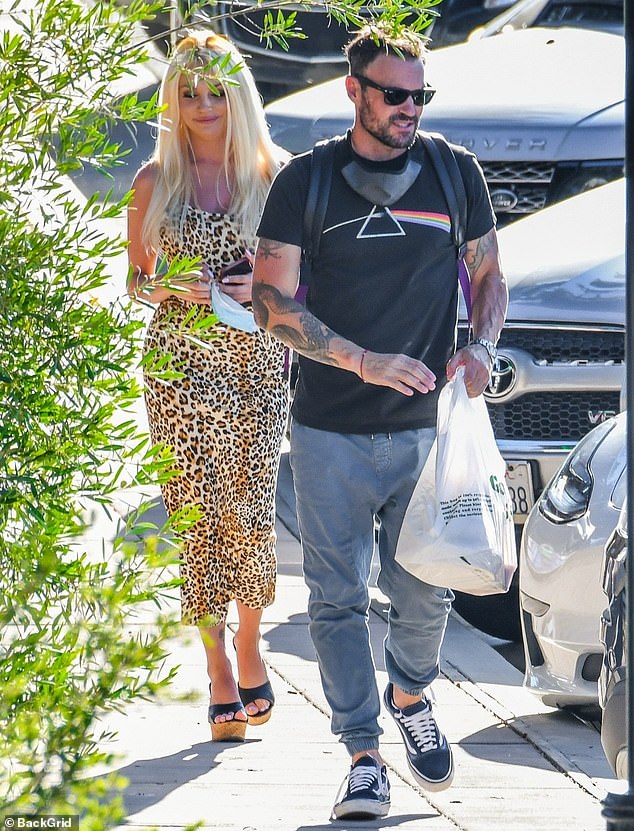 Odd couple: Megan’s ex Brian Austin Green was seen with Courtney Stodden – who is best known for marrying actor Doug Hutchinson in 2011 when she was only 16 and he was 51- in Agoura Hills on June 13. He too had on a Pink Floyd shirt

On Tuesday the rapper wrote on social media that he was ‘in love’ with the actress.

The sweet note was posted while the two were enjoying a romantic COVID-19 style dinner which consisted of boxed Japanese takeout meals eaten outdoors at sunset.

The picnic was not your ordinary one. Rather, it had romance written all over it with a light pink blanket covered with red and pink long-stemmed roses.

Though their faces could not be seen, it was clear their knees were touching as he had on ripped blue jeans while she opted for shredded black jeans during the al fresco meal.

The takeout was fancy too as it came in pretty Bento boxes with pictured attached. There was sushi and edamame (soybeans boiled with salt) and chopsticks. 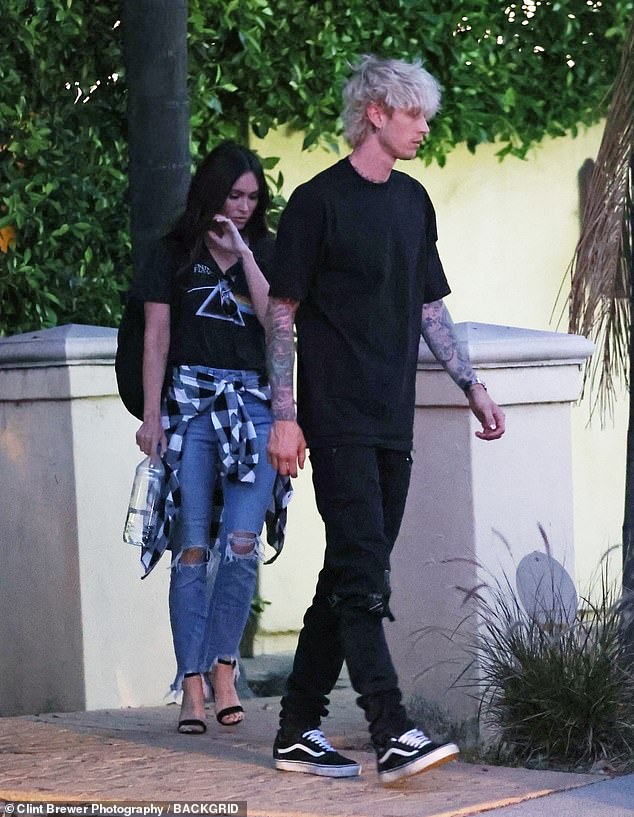 He keeps it simple: Kelly wore a black T-shirt that showed off his arm tattoos as well as black, ripped jeans and black and white sneakers 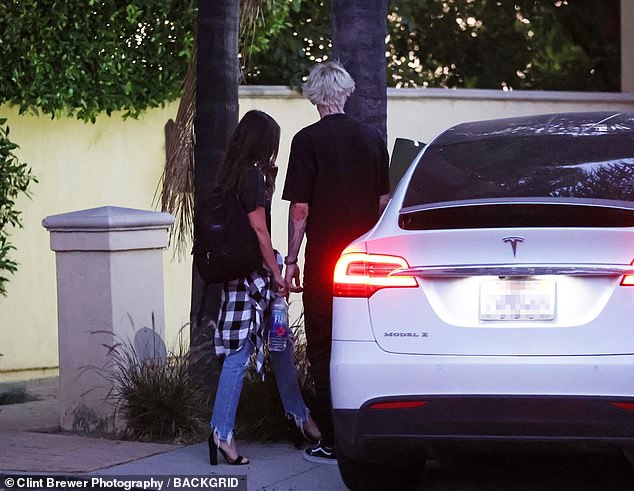 On her way out: Machine Gun Kelly held open the door to her white Tesla as she walked up to the car

They confirmed their romance on Monday.

The loved-up couple had their hands entwined as they walked out of the bar, and the two shared a quick yet passionate kiss before driving away.

Megan rocked a casual punk look with a black T-shirt with the sleeves rolled up slightly to show off her toned arms. 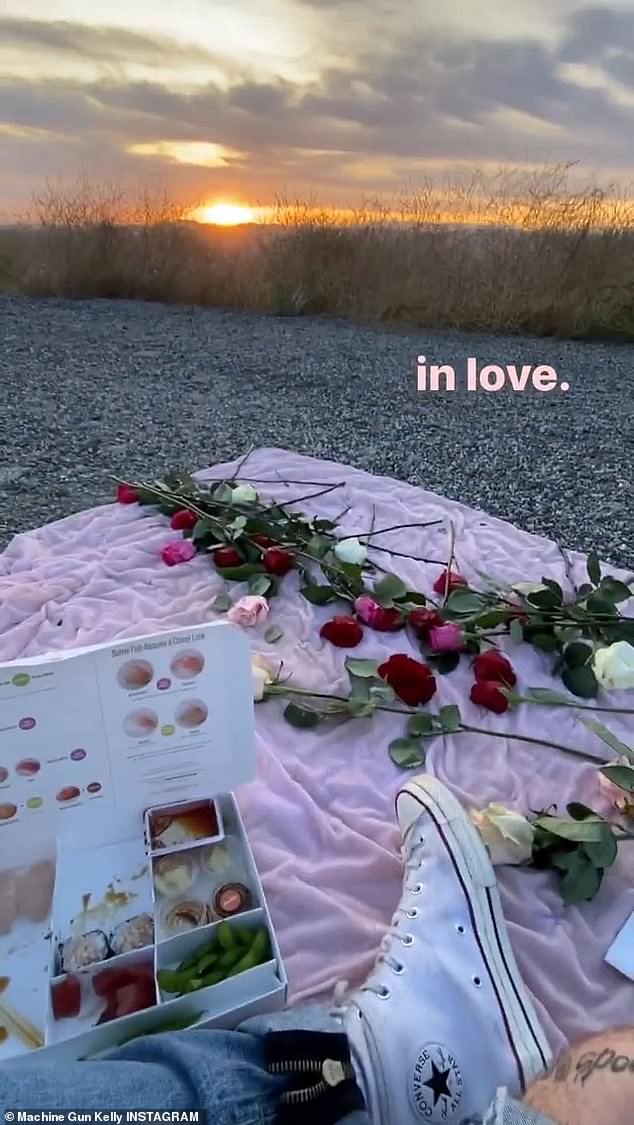 He is smitten:  This comes a day after the 30-year-old rapper said on social media that he was ‘in love’ with the Jennifer’s Body star while they were enjoying a sushi picnic in Los Angeles

She had her shirt tied off around her waist, and she matched it with a tight pair of ripped black jeans – the same ones she wore on her picnic.

The 5ft4in beauty rounded out her ensemble with simple white tennis shoes and a black leather biker jacket that she carried at her side. 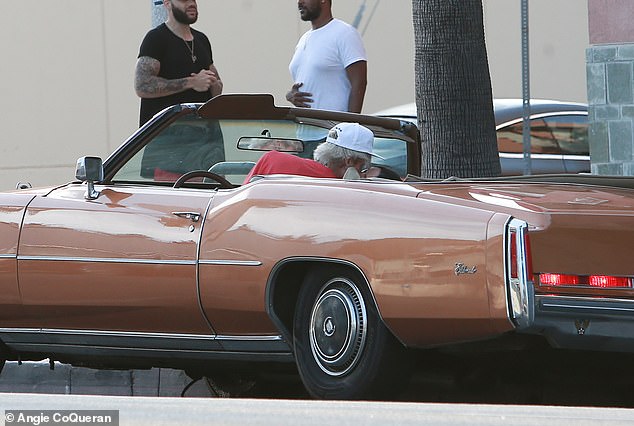 Sealing the deal: The new couple shared a passionate kiss while in his convertible car on June 15 in LA

The King Of Staten Island actor looked agitated as he and Megan left the bar while holding hands around 7 p.m., after first showing up around 5:25 p.m.

The two seemed to be ignoring Los Angeles’ order requiring people within the city to wear face masks whenever they’re in public places, and they didn’t attempt to keep a six-foot distance from others.

He opened the door to allow Megan to step in, but the two took their time before driving away. Kelly leaned over as Megan gazed into his eyes before sharing a kiss with her. 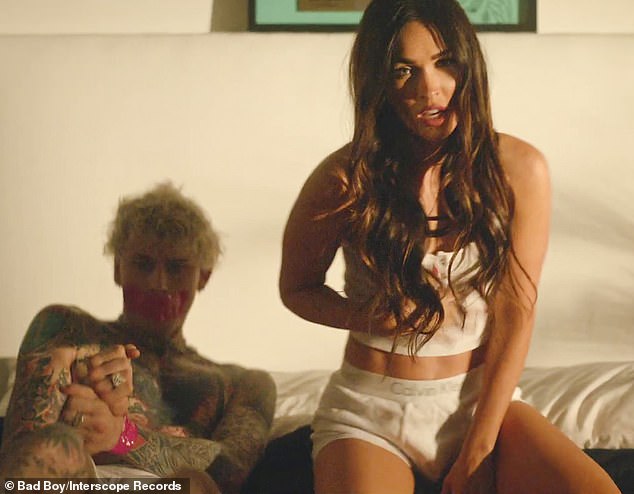 They sizzled together: The pinup starred in the music video for his song Bloody Valentine

Their romantic outing came after Green was spotted with blonde pinup and former teen bride Stodden on Saturday.

The two were leaving Mejico Grill & Tequila Lounge in Agoura Hills in California with a takeout bag.

The Beverly Hills, 90210 star looked casual in a Pink Floyd Dark Side Of The Moon T-shirt and jeans while she was gussied up in a leopard-print dress with high wedge heels.

Stodden is best known for marrying actor Doug Hutchinson in 2011 when she was only 16 and he was 51.

The couple split in 2017 and divorced earlier this year.

Since then, she has tried her hand at sex tapes and took a stab at a singing career that produced the singles Daddy Issues and Hot ‘n Juicy.

And the beauty, who has styled herself to look like Marilyn Monroe, has been linked romantically to Marc Mani, Chris Winters and Chris Sheng in the past. 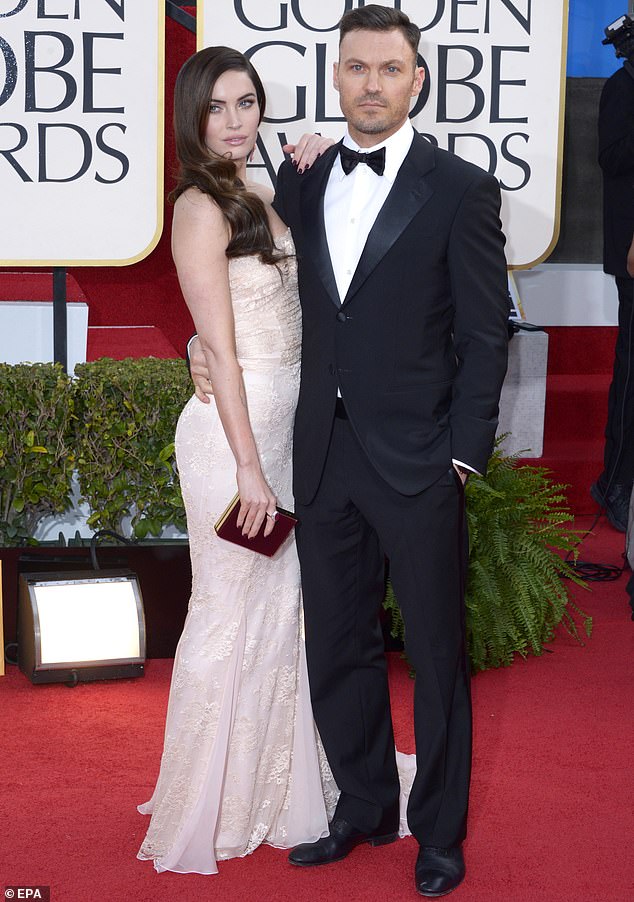 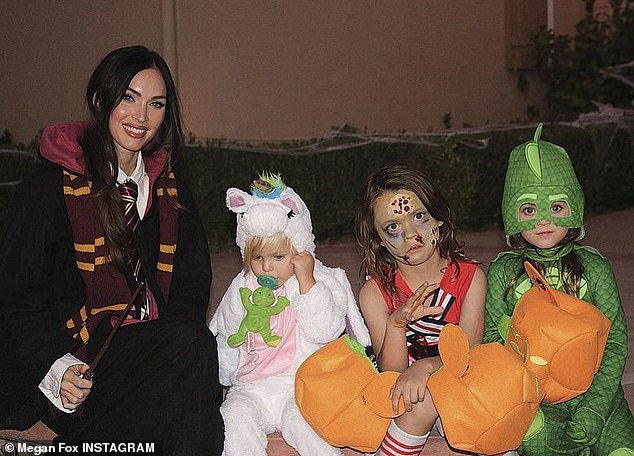 They have a family to think of: Together Brian and Megan have three sons: Noah, seven, Bodhi, six, and Journey, three

Brian and Megan recently separated after a decade of marriage.   Earlier this month, a source told Us Weekly: ‘Megan and MGK have hooked up and they became intimate when Megan and Brian were separated, but hadn’t fully cut ties.’

The insider asserted that the married couple ‘were having issues for a while’ and Brian ‘saw it coming’ before Megan took up with Kelly. ‘Megan can be diva-like, hard to please and high maintenance,’ the source continued.

Brian himself revealed in a recent podcast that he he took Megan’s word for it that she and MGK were friends. But it seems that the Transformers star, who at 34 is 12 years Brian’s junior, has been itching to get back into the Hollywood grind.

The insider added that, ‘Megan felt as though Brian had been holding her back from being in the limelight. ‘She’s interested in getting back out there and reinventing herself.’