Megan Fox and Machine Gun Kelly were the true winners last night as they enjoyed each others’ company during the NHL All-Stars game in Las Vegas after MGK performed in the half-time show.

Megan Fox, 35, and Machine Gun Kelly, 31, were the ones who may have scored big last night as they were spotted cuddling during the NHL All-Stars game in Las Vegas on Saturday, Feb. 5. The newly-engaged couple seemed to enjoy each others’ company as they sat in the bleachers together after the musician performed during the half-time show. Take a look at pics of the lovebirds at the big game here.

MGK appeared to still have his dazzling performance as he rocked a sequin bodysuit, chain choker and key earrings.  The Jennifer’s Body actress kept it much more casual. She sported a white tank top, brown comfy pants and lace-up boots. The couple beamed as they cozied up next to each other and MGK was able to unwind after his successful performance. He had clued fans in that he’d be performing earlier that afternoon. “if you’re watching NHL all star game rn, see you at half time,” he tweeted along with a picture of him wearing his own hockey jersey.

The musician proposed to the actress on January 12. They returned to a banyan tree that had special meaning to them and the “Bad Things” popped the big question. The couple announced the big news on Instagram. “Somehow a year and a half later, having walked through hell together, and having laughed more than I ever imagined possible, he asked me to marry him. And just as in every lifetime before this one, and as in every lifetime that will follow it, I said yes,” she wrote in her caption,” adding, “.…and then we drank each other’s blood,” which rose plenty of eyebrows.

He proposed to her with an impressive $400k two-stone ring. “i know tradition is one ring, but i designed it with Stephen Webster to be two: the emerald (her birth stone) and the diamond (my birth stone) set on two magnetic bands of thorns that draw together as two halves of the same soul forming the obscure heart that is our love,” he said of choosing such a unique engagement ring on Instagram. 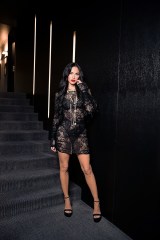 He later disclosed that he also intentionally had the ring designed so that it hurts to take it off. He explained to Vogue that the ring has actual thorns on the bands so that it’s painful to take off. He added that the philosophy behind the mechanic is that “love is pain,” and he took that notion very literally.