EXCLUSIVE – Revealed: Meg Mathews’ ‘new man’ in THOSE holiday snaps has a girlfriend of seven years who’s dumped him and thrown him out of their home… (but he insists he’s NOT dating Meg)

The hunky tattooed influencer pictured in cosy holiday photos with Meg Mathews was still in a relationship with his girlfriend of seven years who has dumped him over the snaps, MailOnline can reveal.

Meg appeared to go Instagram official with Jay James yesterday when she posted a series of seemingly loved-up pictures of the pair soaking up the sun in Newquay.

But today MailOnline can reveal that James, whose real name is Jason Stuart, had not told girlfriend Kate Griffiths about his trip to Cornwall with Meg.

Kate, 57, a make-up artist, says she was so shocked by the cosy pictures of Mathews and her boyfriend that she’s dumped him and thrown him out of the home they shared in Tunbridge Well, Kent.

Speaking exclusively to MailOnline, she raged ‘I’ve left the person I loved and the person I thought loved me.’ 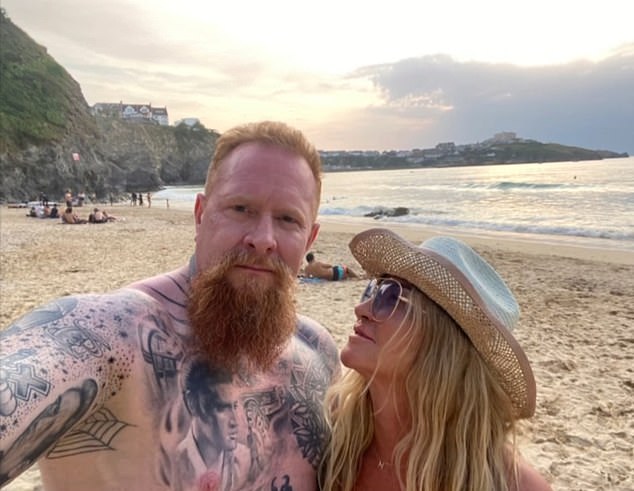 Meg Mathews posted some cosy holiday snaps of her with social media influencer Jay James, which many took to believer was her announcing their new relationship 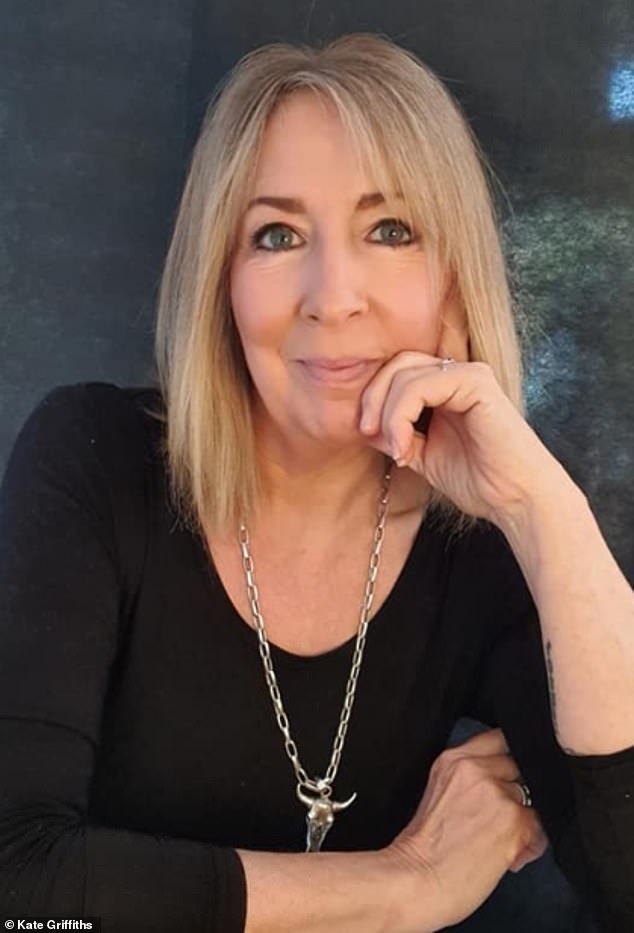 The trouble is, Meg’s pictures were seen by make-up artist Kate Griffiths, 57, who insists she has been in a relationship with him for the past seven years and lived with him 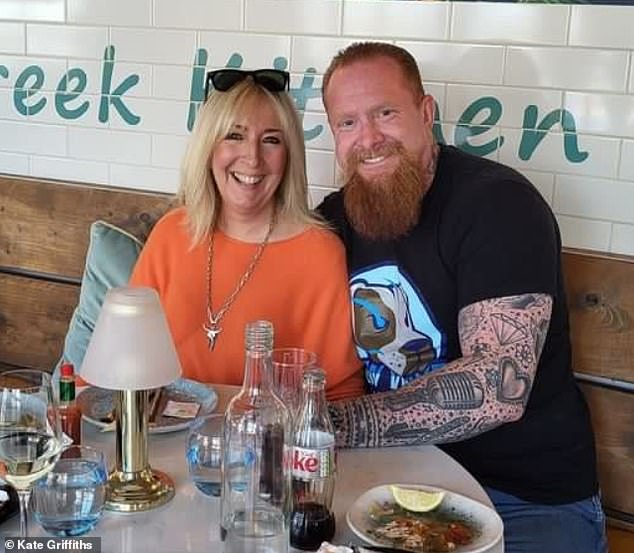 However, friends of Jay hit back and insisted he is not in a relation with Meg – and was miffed that Meg posted the photos online.

A friend said: ‘Jay was just as shocked to see the pictures of him and Meg posted in that fashion. He’s miffed by the whole thing and is adamant he’s not in a relationship with her.

‘It’s true Kate has split up with him, but he says their relationship was always fragile and were inevitably going to head their separate ways. This was just the straw that broke the camel’s back. 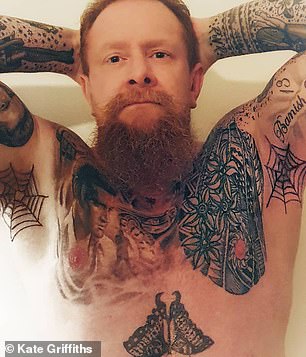 Tattooed Jay, 45, (pictured) insists that there has been a misunderstanding and that he isn’t in a relationship with Meg

Kate claims Jay told her he was heading to Cornwall for five days to take part in a campaign shoot for the Cornish Tourist Board, who approached him due to his 35,000 Instagram following on his @benandonner account.

She says Jay ‘didn’t once mention Meg’s name’ during their conversations.

He returned to their home on Tuesday, but the following day Meg posted loved-up pictures of their pair on the beach and driving in an open top car.

Having been alerted to the pictures by friends, Kate confronted Jay, 45, and she claims he admitted trying to befriend Meg, 56, on Instagram in order to be part of the campaign in which she features, as she lives in Cornwall.

And he said the snaps which Meg posted were ‘publicity shots’.

He’s now living with his parents in Rochester, Kent, and has made his Instagram account private after Kate dismissed his version of events.

The former couple, who pictured together last month at The Oyster Kitchen in Southend where Kate took Jay for his birthday treat, have lived together for two and a half years.

Meg deleted the pictures of the pair on Wednesday and when MailOnline approached her reps, they refused to comment.

The former nineties party girl, who has a daughter Anais, 22, with Noel, was pictured gazing lovingly at tattooed Jay as they posed at sunset and also labelled him a ‘viking’ on her Instagram stories.

A friend of Meg’s said: ‘Meg’s so happy with Jay.’ 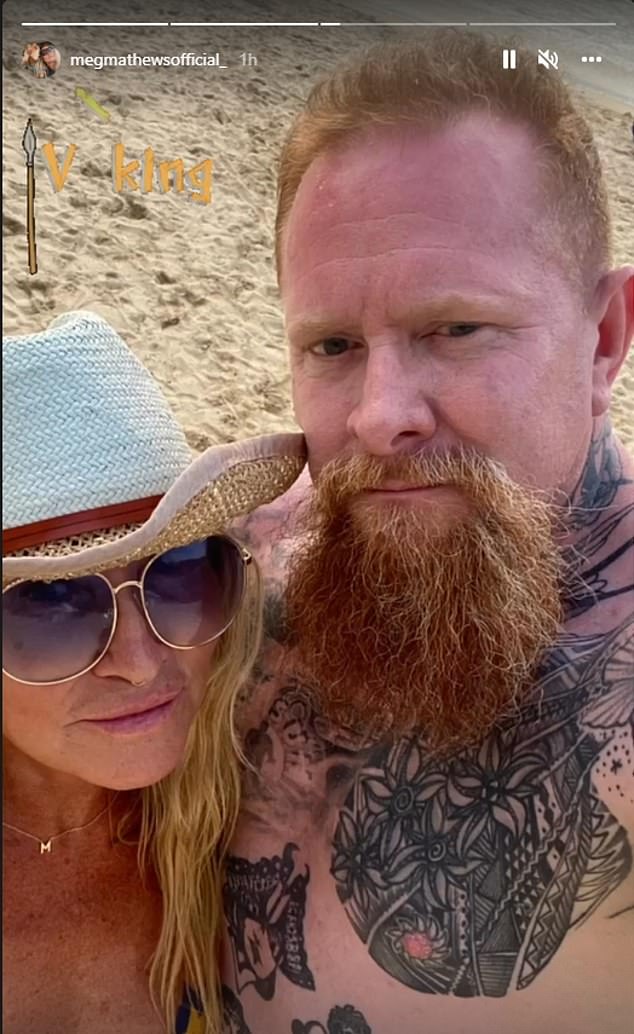 Meg and Jay, whose real name is Jason Stuart, pose happily on the beach in Newquay during the heatwave – but back home in Tunbridge Wells, trouble was brewing with his girlfriend 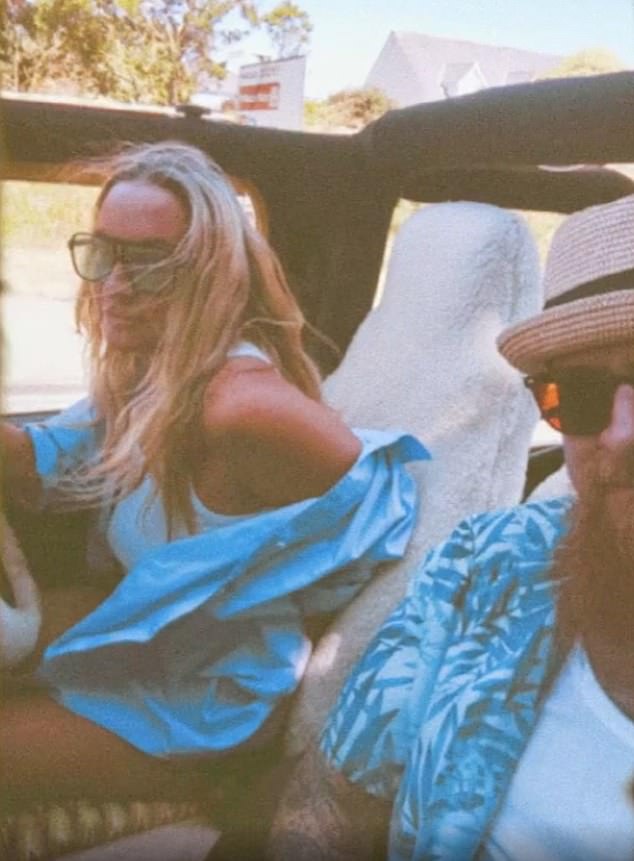 Meg posted these pics of them having fun in the sun, which she’s since deleted. Jay reportedly told his girlfriend that he was going to Cornwall for a publicity shoot for the tourist board

The relationship is Meg’s first since she opened up about how the menopause crippled her sex life, left her with no libido and ‘wiped her out physically and mentally’ – sparking a fitness and health overhaul.

Speaking in 2019, she revealed how hormonal changes contributed to her split from her partner at the time, saying she would rather cuddle her dog than get intimate under the covers.

In January 2018, she launched MegsMenopause, a product range to help women cope with the symptoms.

Meg was married to Oasis rocker Noel between 1997 and 2001. In an interview with The Mirror in 2020, Meg claimed she had no one to talk to as their relationship began to collapse.

Meg told The Mirror: ‘I came through the marriage, everything was public. At the end of the day I did not have the cog or the PR world that that person [Noel] had.

‘I was just the ex-wife, I had nobody. I didn’t know what to do. I didn’t have a press agent, wasn’t famous, I just had a daughter.

‘I used to get terrible PTSD. In 1997 I was the third most written about woman. It was Lady Diana, The Spice Girls and me.’