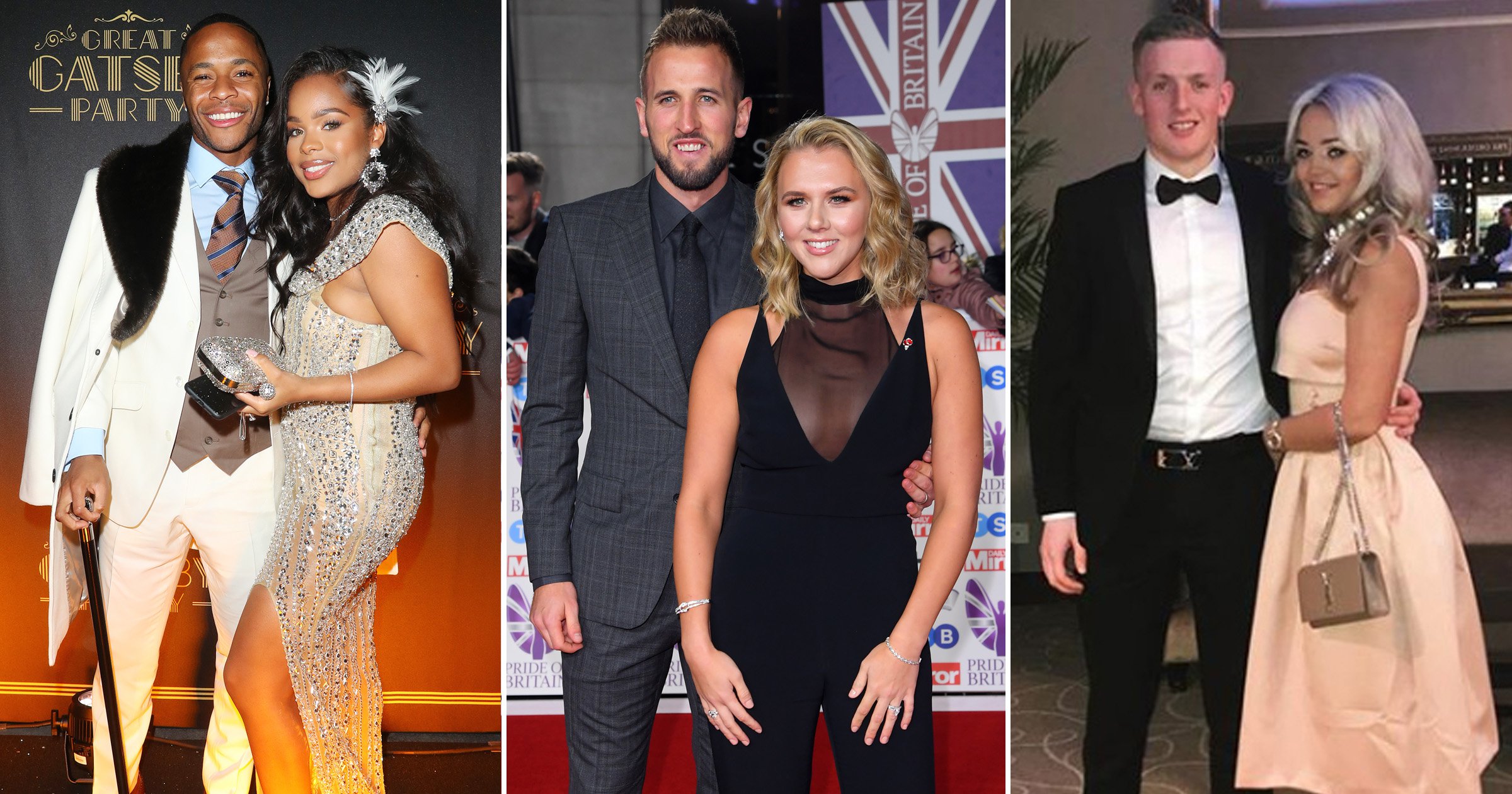 England are preparing to take on Ukraine in the Euro 2020 quarter-final tonight, with the winners setting up a tense semi-final tie.

There will be a string of famous faces watching the national team at home, with some getting started a little early on the celebrations – yes, we’re looking at you, Rob Beckett.

No matter the result this evening, Harry Kane, Raheem Sterling and co will be cheered on by their wives, girlfriends and families, some of whom have been in the crowds during the tournament.

The WAGs of England past have given us some of the most iconic photo opportunities in football history – who could forget those iconic snaps of Cheryl, Victoria Beckham and Coleen Rooney in the stands in 2006?

Manchester City and England ace Raheem Sterling is engaged to fiancée Paige Milian, with the couple sharing sons Thiago and Thai together.

The athlete – who also has daughter Melody from a previous relationship –  confirmed their engagement in 2018, but has kept his private life firmly under wraps for the most part.

Paige, who owns Milian property group, was in the stands to watch her beau score against Germany on Tuesday, blessing fans with stunning snaps of Raheem posing with his little one on the pitch after the final whistle.

Harry Kane and wife Katie met when they were children, and have been inseparable ever since.

The Tottenham star and fitness expert announced their engagement in 2017, shortly after welcoming eldest daughter, Ivy.

They tied the knot in a swanky wedding two years later, and have since added to their family twice more, welcoming Vivienne and Louis.

England goalkeeper Jordan Pickford is married to university graduate Megan Davison, with the pair previously due to tie the knot last year before the coronavirus pandemic scuppered their plans.

Instead of the swanky Maldives ‘do they had been meticulously planning, they enjoyed a low-key day at a registry office in Cheshire instead at the beginning of last year.

Megan and Jordan have been together since they were teenagers, and got engaged in 2018. They share son Arlo together, welcoming their first child in 2019 – with the pair cheering Jordan on from the stands on Tuesday.

Harry Maguire has a lot to celebrate at the moment, as not only is it coming home, but he commemorated his 10-year anniversary with fiancée Fern Hawkins last month.

The Manchester United centre-back met the university graduate in 2011, with Harry getting down on one knee while on a romantic trip to Paris in 2018.

Months after their engagement, Fern welcomed their first child together, introducing the world to little Lillie Saint, with the lovebirds welcoming daughter Piper last year.

Kyle Walker has been dating Annie Kilner for well over a decade, with the pair first linked in 2010.

After a rollercoaster romance, the stars – who share children Riaan, Reign and Roman – briefly split, but reunited and shared the news of their engagement last year.

Their romance was thrown into the spotlight when Lauryn Goodman welcomed baby Kairo with the Manchester City star, during their temporary split.

Despite the drama, Annie is hoping to expand her family with the footballer once more, previously telling OK! Magazine she wants a daughter.

‘I really want a little girl,’ she confessed. ‘I love my boys, but I’d really like a daughter as I’m outnumbered in this house.’

The lovebirds keep their relationship firmly behind closed doors, not sharing any glimpses of family life on social media.

They are planning to add to their family soon as Rebecca is currently pregnant with a baby girl.

Kalvin Philips has been dating make-up artist Ashleigh Behan for around eight years, with the couple living together in Leeds.

They are seriously loved up, and share tributes to each other on their social media pages, giving us a glimpse into swanky holidays, meals out and date nights.

One of Ashleigh’s oldest pictures, from 2014, shows her proudly celebrating her beau as he posed beside his Leeds United kit, when he first signed a professional contract with the Premier League club.