Matthew Perry has revealed counsellors at a rehab clinic tried to stop him from going to hospital when his colon exploded because they thought it was a bid to get drugs.

The 53-year-old was given just a two percent chance of survival after an opioid addiction caused his colon to burst when he was 49, leaving him in a coma for two weeks and spending months in hospital.

Prior to his admittance, he was staying at a sober house alongside his assistant, who could see he was in serious pain and got him to hospital despite staff insisting it was just ‘drug-seeking behavior’.

He added his problems didn’t stop after he was admitted, as the hospital he was staying in didn’t have the necessary equipment to treat him, but neighboring clinics refused to admit him because of his level of fame.

It comes after the actor revealed in his new book he spent around $9million trying to get sober and recently celebrated 18 months of sobriety.

He also told how Friends co-star Jennifer Aniston confronted him about his drinking and revealed she and the rest of the cast ‘know you’re drinking.’

But he said she was a constant source of support during his recovery, adding: ‘[Aniston] was the one that reached out the most,’ he revealed. ‘I’m really grateful to her for that.’ 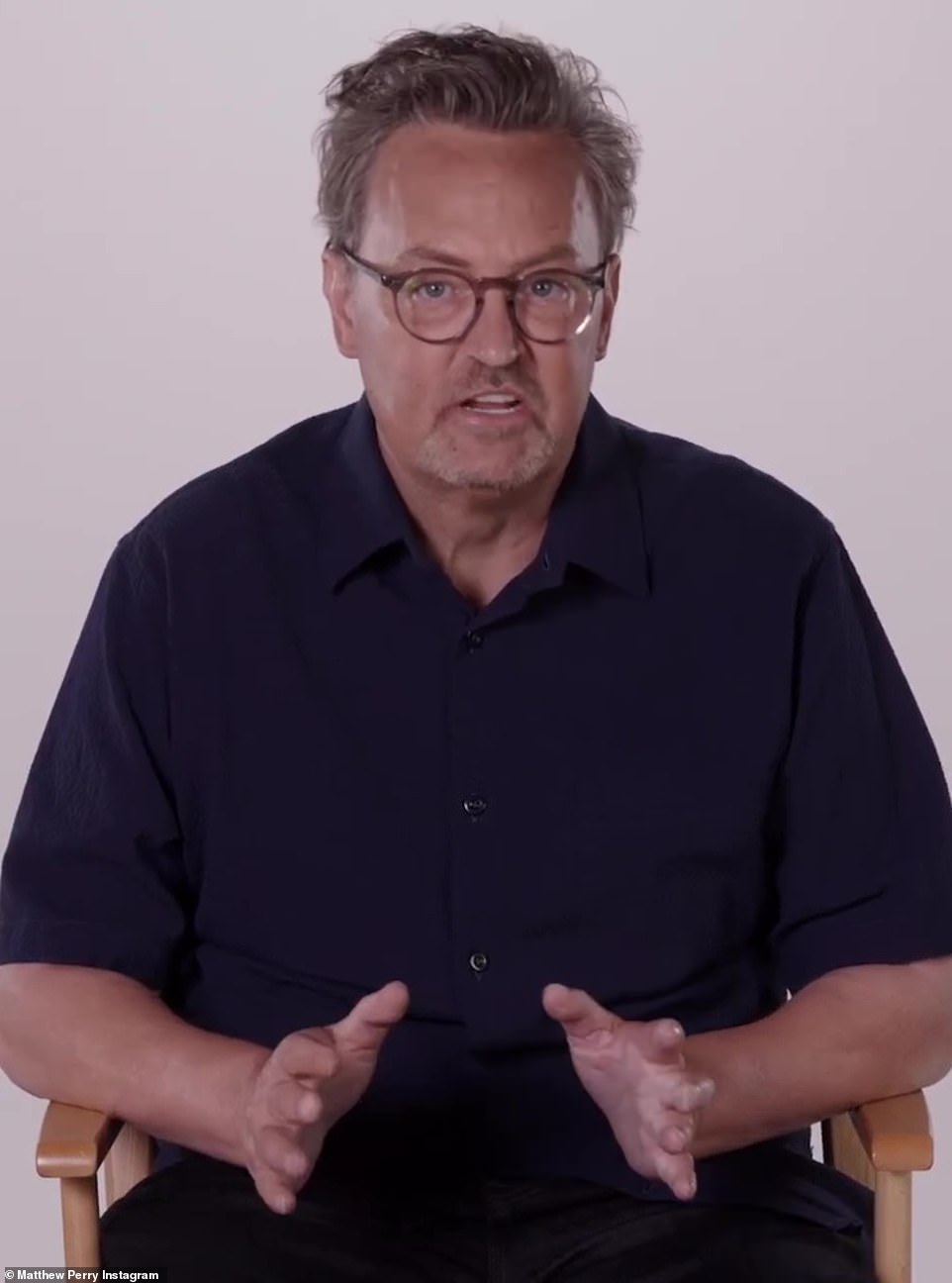 Shocking: Matthew Perry has revealed that the counsellors at rehab tried to stop him from going to hospital when his colon exploded because they thought he was going to get drugs (pictured September 2022) 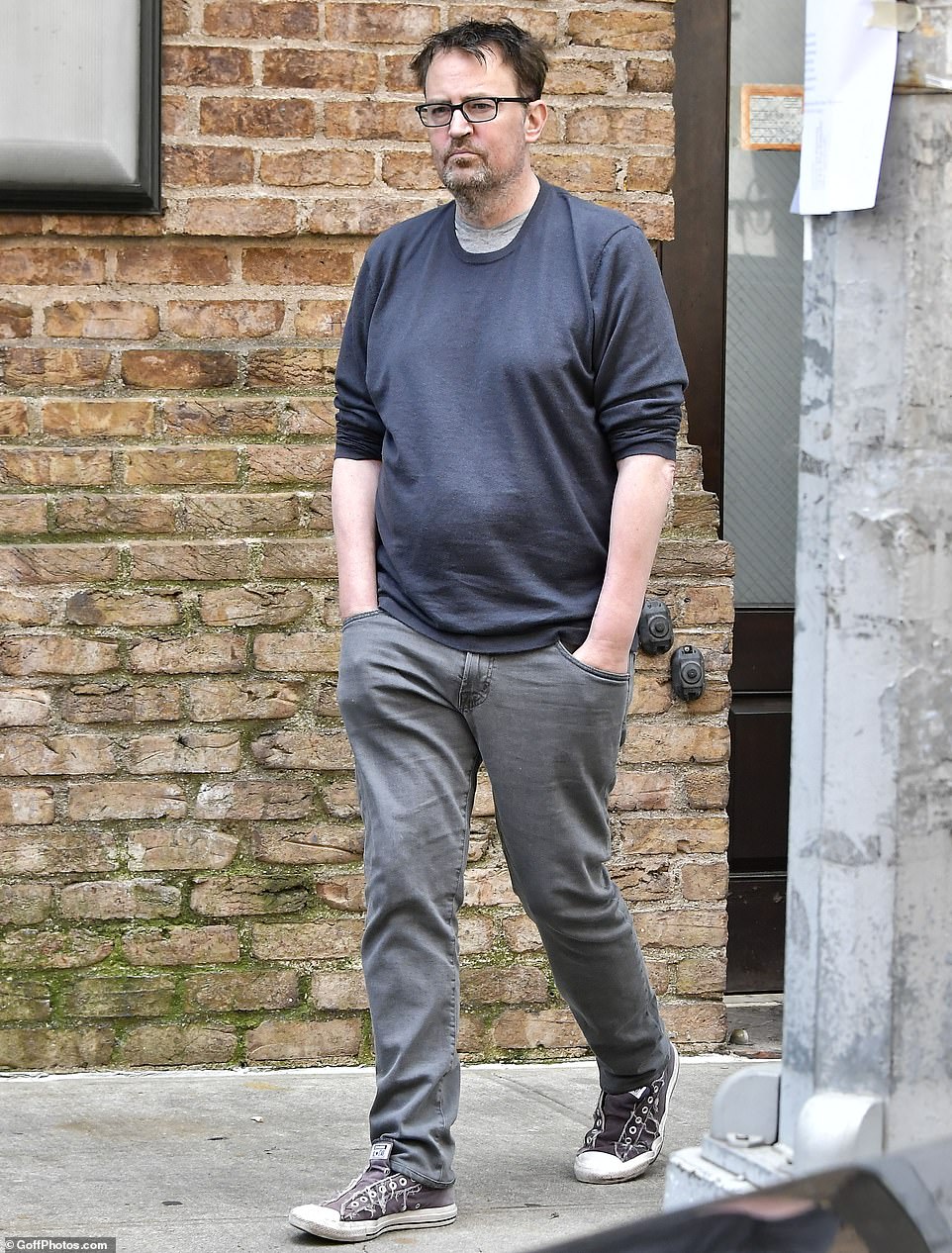 Life-threatening: The star, 53, was given just a two percent chance of survival in 2019 after an opioid addiction caused his colon to burst when he was aged 49 (pictured in 2019) 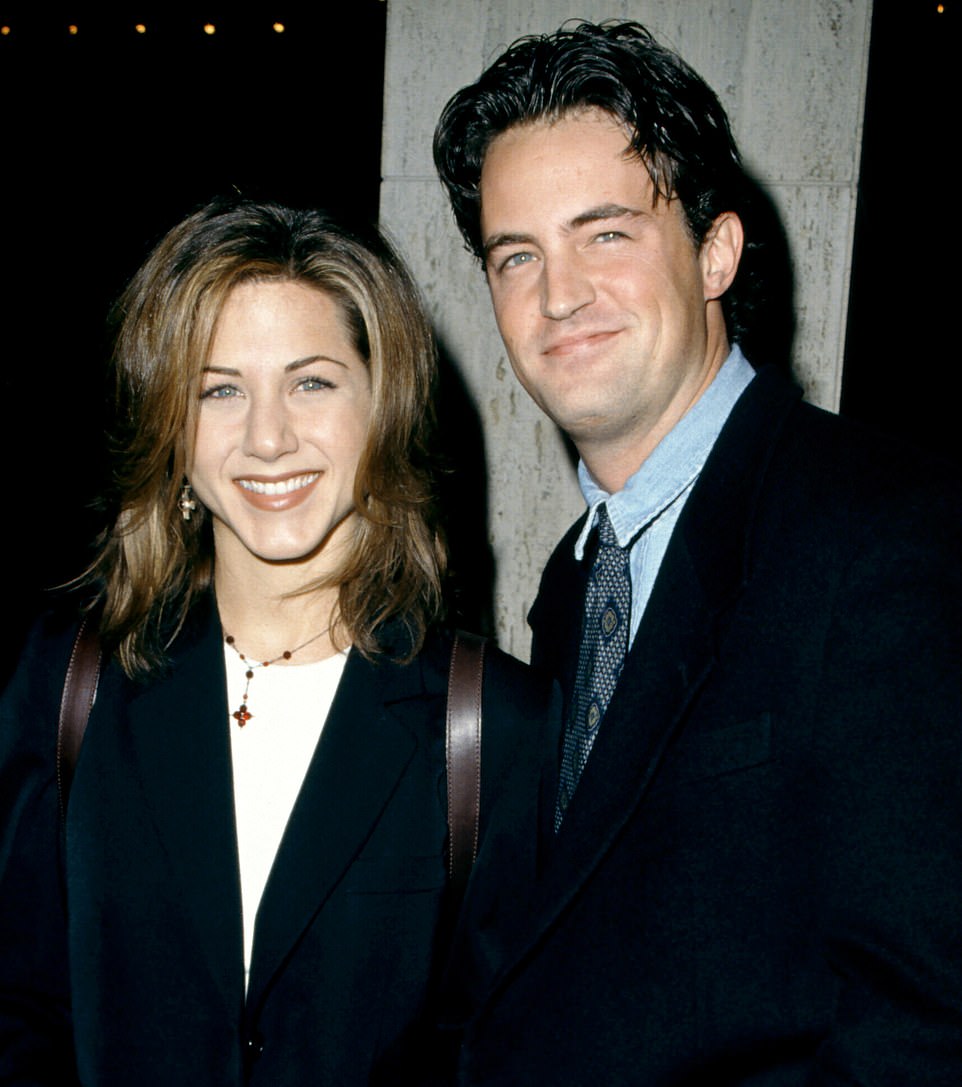 Support: He also shared Aniston’s continued support during his recovery: ‘[Aniston] was the one that reached out the most,’ he revealed. ‘I’m really grateful to her for that’; Pictured 1995

In an extract from his memoir, Friends, Lovers and the Big Terrible Thing, published in The Times on Monday, Matthew revealed that he was in the worst pain of his life and had been unable to empty his bowels for 10 days when his assistant came to his aid.

He recalled: ‘Something was wrong, very wrong. This was a different kind of pain. Like my body was going to burst. ‘Like my insides were trying to force their way out. This was the no f***ing-around kind of pain.’

It was at this point, his assistant Erin – who had been staying in the sober house with him for support – realized he needed to go to hospital.

Yet she was told by staff at the sober house: ‘This is just drug-seeking behavior. He’s going to ask for drugs at the hospital.’

Perry recalled counsellors tried to ‘block’ their exit, at one point even standing in front of their car so they couldn’t leave. He reasoned: ‘If I were just doing this to get drugs, then I deserved an Oscar.’

The actor was then admitted to Saint John’s Hospital where he lapsed into a coma, aspirated into his breathing tube, contracted pneumonia and his colon exploded. 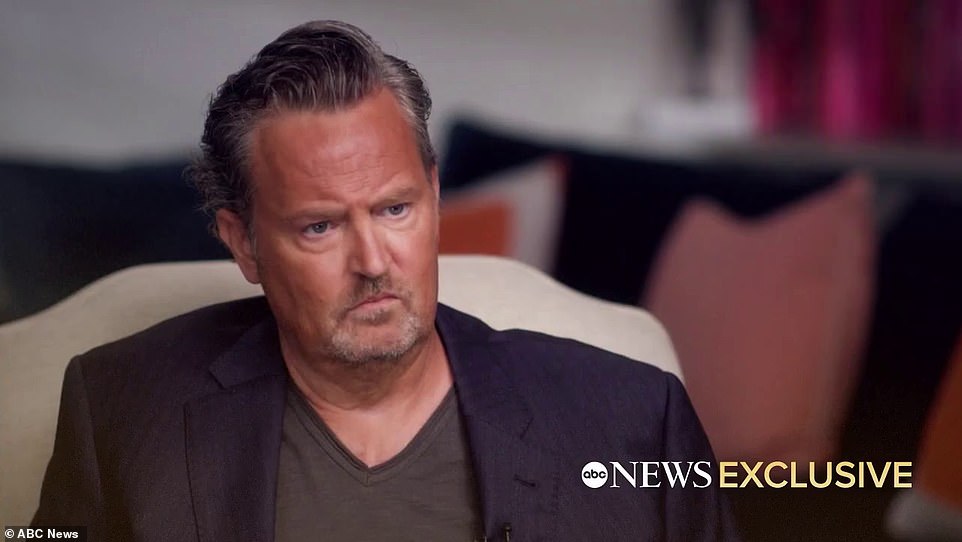 ‘I’ve probably spent $9 million or something trying to get sober’: Matthew Perry, 53, revealed the steep cost of his sobriety a few days after sharing he nearly died from an opioid addiction 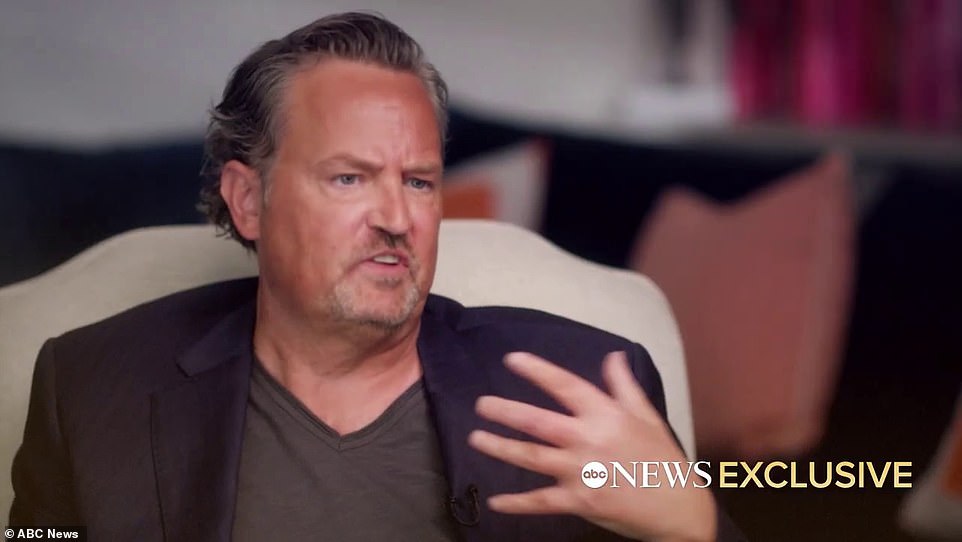 Road to recovery: Last week the TV star – who is set to sit down with Diane Sawyer for an exclusive interview airing October 28 – detailed how his drug and alcohol addictions left him with a 2 percent survival after opioids caused his colon to burst and left him in a two-week coma 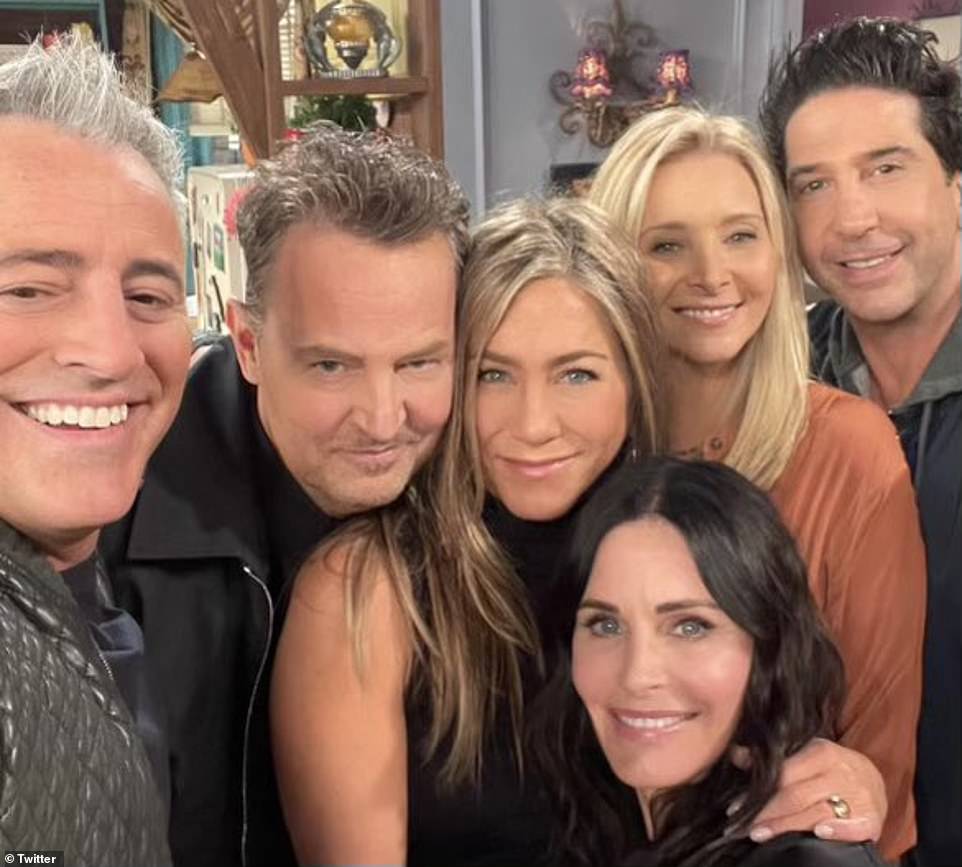 Sober: The Friends star also shared that he recently celebrated 18 months of sobriety, indicating that her was newly sober during the Friends reunion special in May 2021

After beating the odds and surviving the night, Matthew’s loved ones were told he needed an extracorporeal membrane oxygenation machine, which wasn’t available at Saint John’s. 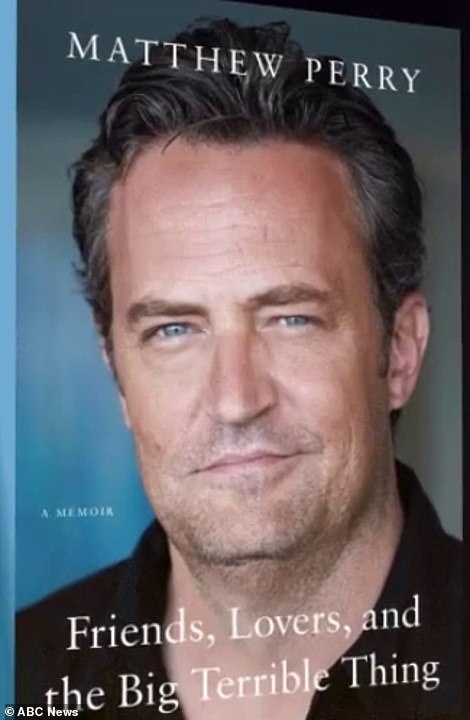 But other hospitals were not willing to admit him, with Perry saying: ‘Cedars-Sinai was called — they took one look at my chart and apparently said, ‘Matthew Perry is not dying in our hospital.’ Thanks, guys.

‘UCLA wasn’t willing to take me, either — for the same reason? Who can say? — but at least they were willing to send an ECMO machine and a team.

‘I was hooked up to it for several hours, and it seemed to work!’

Perry revealed UCLA then admitted him and he spent six weeks on their heart and lung ICU unit. MailOnline has contacted Cedars-Sinai and UCLA for comment.

In total, Matthew had to have 14 surgeries on is stomach and had to use a colostomy bag for nine months; he said his stomach has a number of scars from the multiple surgeries.

The extent of his drug addiction was revealed on Thursday during his interview with People Magazine, while he was speaking about his upcoming memoir.

During his interview, Matthew – best known for playing Chandler Bing on Friends – spoke about his decades long battle to rid himself of the disease of addiction.

His therapist told him he may have to use a colostomy bag for the rest of his life if he takes drugs again, something that keeps him from relapsing.

The actor did not disclose when he got sober but said he is ‘pretty healthy’ now and chooses to ‘count each day.’ 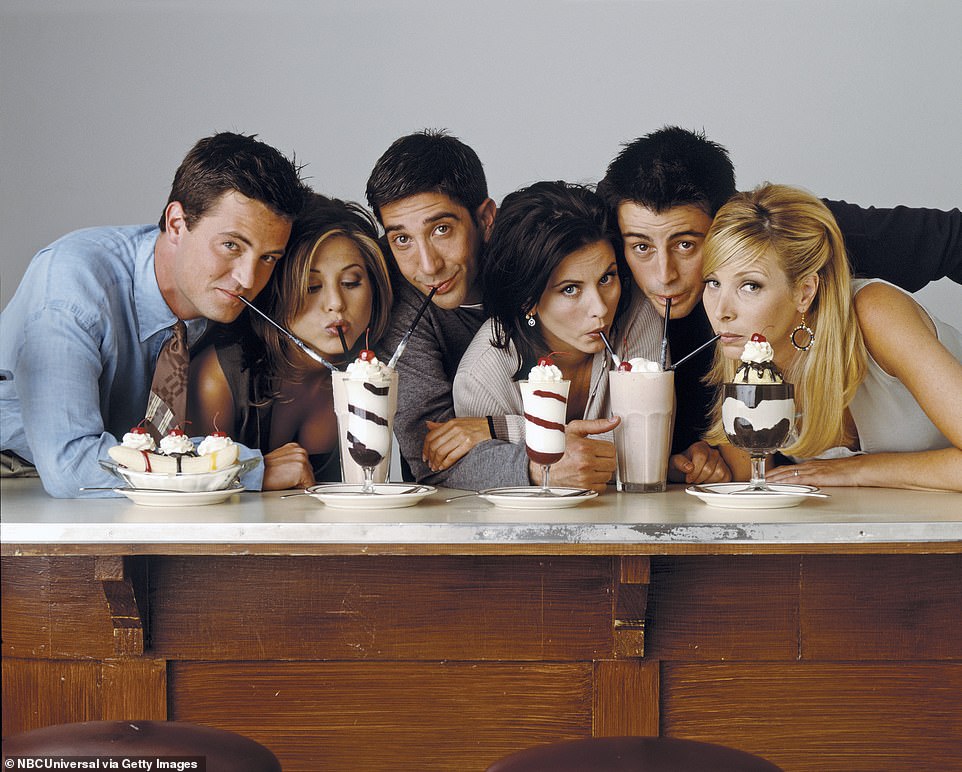 Troubled: The actor said his alcohol addiction began when he was 24 while starring on Friends (pictured with Jennifer Aniston, David Schwimmer, Courteney Cox, Matt Le Blanc and Lisa Kudrow) 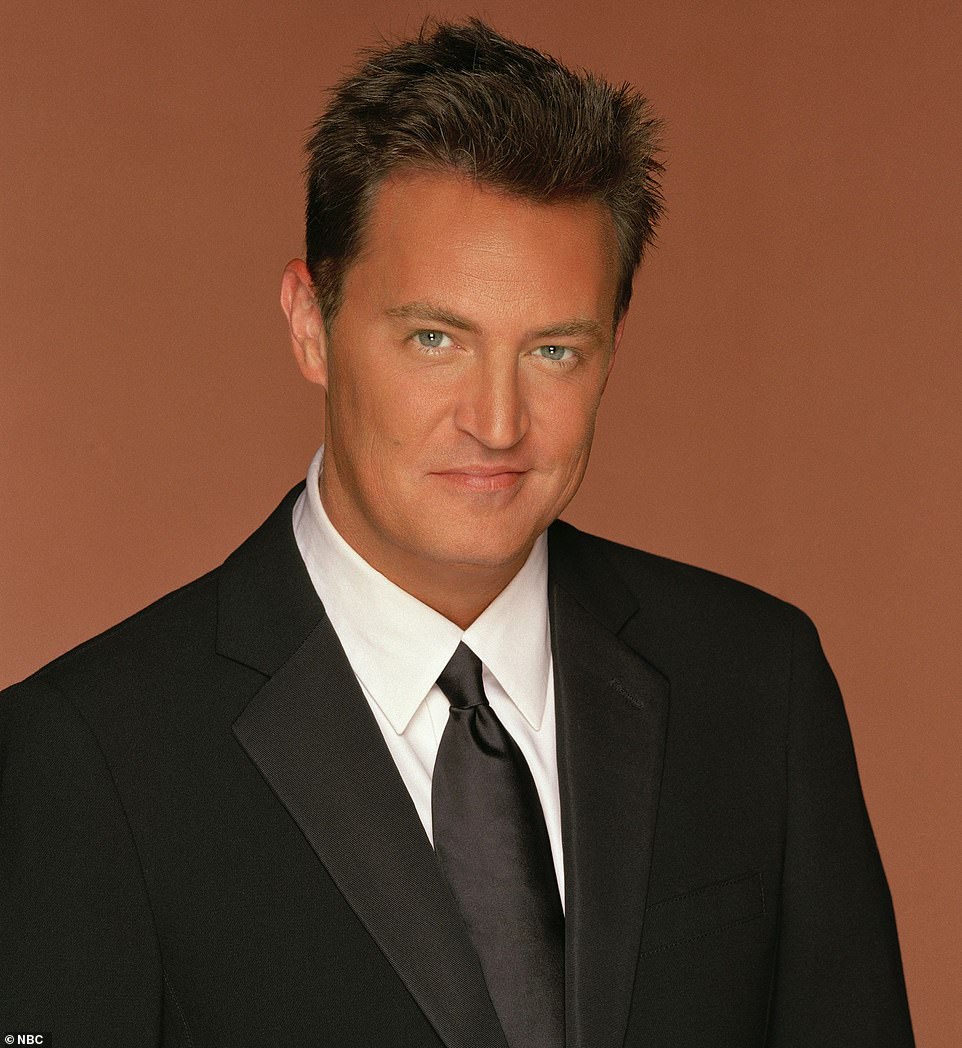 Outrageous: The hospital he was staying in didn’t have the necessary equipment to treat him, but neighbouring clinics refused to admit him because of his level of fame (pictured in 2004)

The actor said his alcohol addiction began when he was 24 while starring on Friends, adding that he was ‘entrenched in a lot of trouble’ by age 34.

Matthew revealed that at one time he was taking 55 Vicodin a day while on Friends, noting that he was down to 128 pounds but ‘didn’t know how to stop.’

He said that his co-stars on Friends ‘were understanding’ and ‘patient.’

During season nine, Matthew was sober; that was the year he also was nominated for Best Actor.

He played Chandler from 1994 to 2004 on Friends alongside co-stars David Schwimmer, Matt LeBlanc, Jennifer Aniston, Courteney Cox and Lisa Kudrow.

The show aired for 10 seasons and made the stars household names. They reunited in 2021 – the first time after 17 years since the show ended – for a reunion special.

Perry’s net worth stands at $120million, according to Celebrity Net Worth. The actor made $22,500 per episode on the first season of Friends, with his salary rising to $1million per episode for the last two seasons.

If you or someone you know is struggling with substance abuse in the US, please contact the SAMHSA helpline at 1-800-662-HELP

From Friends superstar to a 30-year battle with addiction: Matthew’s trials and tribulations

1994 –  After spending his post high school years appearing in a string of US sitcoms, Matthew, 24, lands the role of Chandler Bing in Friends, which becomes an instant success. He later told the New York Times of that period:

‘When [fame] happens, it’s kind of like Disneyland for a while. For me it lasted about eight months, this feeling of “I’ve made it, I’m thrilled, there’s no problem in the world.’

‘And then you realise that it doesn’t accomplish anything, it’s certainly not filling any holes in your life.’

1997 – At the peak of his success on the NBC sitcom, Matthew is injured in a jet-ski accident. He is prescribed opioids to cope with the fame, later recalling that he took the prescribed pills without question: ‘I did and I felt better than I ever felt in my entire life. I had a big problem with pills and alcohol, and I couldn’t stop.’

He checked into rehab that same year but said: ‘You can’t have a drug problem for 30 years and then expect to have it solved in 28 days. Getting sober is a really hard thing to do.’

1998 – Despite his rehab stint, the actor continues to battle addiction, revealing ‘I don’t remember three years of [the show]. Somewhere between seasons three and six… I was a little out of it.’ At one point during his Friends career, he is taking 55 Vicodin a day.

2001 – Matt completes another stint in rehab for for addiction to Vicodin, methadone, amphetamines, and alcohol.

2003 – The TV star is sober for season nine of Friends, when he was nominated for a Best Actor Emmy.

2007 – He receives Emmy and Golden Globe Award nominations for his critically acclaimed turn in the titular role of TNT movie, The Ron Clark Story.

2011  – The actor enters rehab for a third time, with a representative for the star saying it was to prevent a relapse. The actor says in a statement: ‘I’m making plans to go away for a month to focus on my sobriety and to continue my life in recovery. Please enjoy making fun of me on the World Wide Web.’

In his role as a spokesperson for National Association of Drug Court Professionals, Matthew goes to Capitol Hill to lobby members of Congress in support of funding for drug courts.

2013 – He receives a Champion of Recovery award from the White House Office of National Drug Control Policy for opening Perry House, a sober living home situated in his former mansion in Malibu, California

2015 – Matthew sells his Malibu home and shutters the rehab center

2018 – Matthew has abdominal surgery to repair a gastrointestinal perforation. He has now revealed he was given just a two per cent chance of survival after his opioid addiction caused his colon to burst when he was aged 49, leaving him in a coma for two weeks and spending months in hospital.

He has to use a colostomy bag for nine months, and has had 14 surgeries on his stomach in total over the years.

2021 – The cast of Friends reunite on screen for the first time in 17 years. There are concerns after Perry appears to slur his speech in a promo for the reunion special.

Ben Winston, who directed Friends: The Reunion, said of those commenting on Perry’s appearance during the HBO Max special: ‘He was great. People can sometimes just be unkind. I wish they weren’t.

‘I loved working with him. He’s a brilliantly funny man and I thought he had some great one-liners in the show. I felt just happy and lucky to be in his presence and directing him on something like this.’

2022 – Matthew gives his first tell-all interview in which he details how his drug and alcohol addictions secretly nearly cost him his life.

Prince William has been jealous of his brother for years, perhaps even decades. I would love to know when the shift really came, when William…