Love Island’s Tommy Fury has reportedly said he will propose to girlfriend Molly-Mae Hague this weekend  – but only if his brother Tyson wins his boxing match.

The couple are in Las Vegas to watch Tyson’s much anticipated rematch against American Deontay Wilder.

And Tommy, 20, has reportedly decided that it may be time to pop the question to his girlfriend of nine months, sources told The Sun. 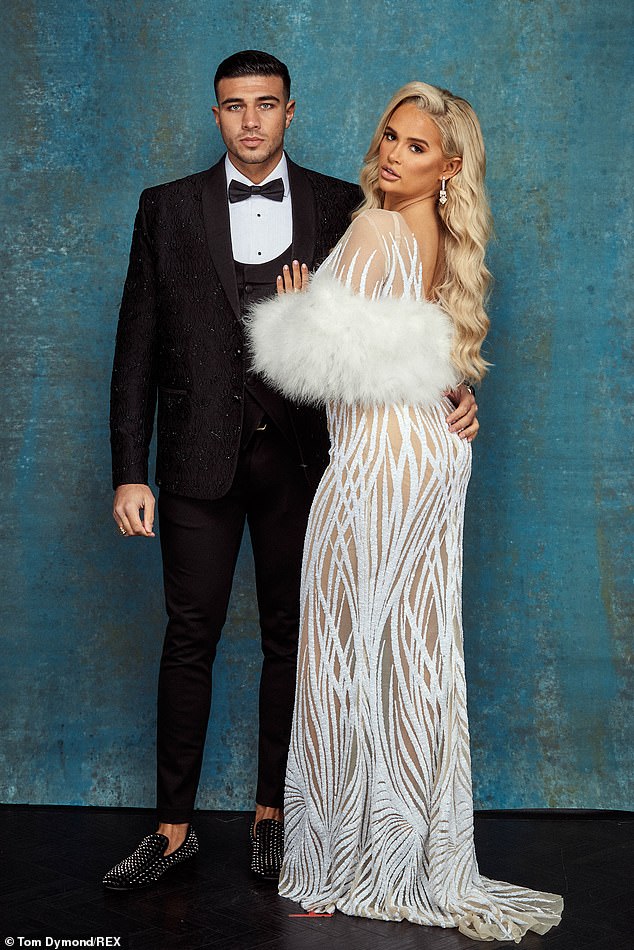 Put a ring on it? Love Island’s Tommy Fury has reportedly said he will propose to Molly-Mae Hague this weekend – but only if his brother Tyson wins his boxing match (pictured last month)

A source told the publication: ‘Tommy’s serious about Molly and thinks proposing in Vegas surrounded by family will be the perfect time.

‘He’s of the mind only to do it in Vegas if his brother Tyson wins his fight against Deontay Wilder tonight. He thinks it would be the perfect way to end the perfect day.’

The rematch between the American and British Boxer has been on the cards for 15 months since the components drew against each other in Los Angeles.

This weekend, the winner will receive a pay out of around £30million, with both expected to get eight figure sums from the £58 paid by every fan who wishes to watch the show in their own home around the US. 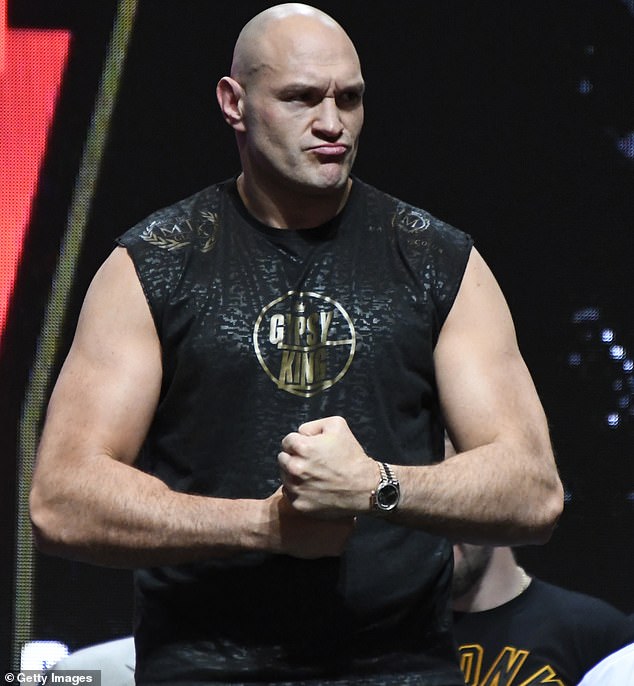 Big brother: Tyson Fury will take on Deontay Wilder in the heavy weight rematch on Sunday

Molly and Tommy previously acted as a good luck charm for Tyson when they watched him box a victorious fight against Otto Wallin in Las Vegas in September.

It comes after Tommy surprised his girlfriend  by decorating a suite at the Mandarin Oriental hotel in Hyde Park, London, after spending the morning at The Lanesborough for breakfast for Valentine’s Day.

Taking to Instagram, Molly-Mae shared a series of photos from her romantic treat which showed a photo of Tommy laying on a sofa surrounded by a huge balloon display and an extravagant bouquet of roses. 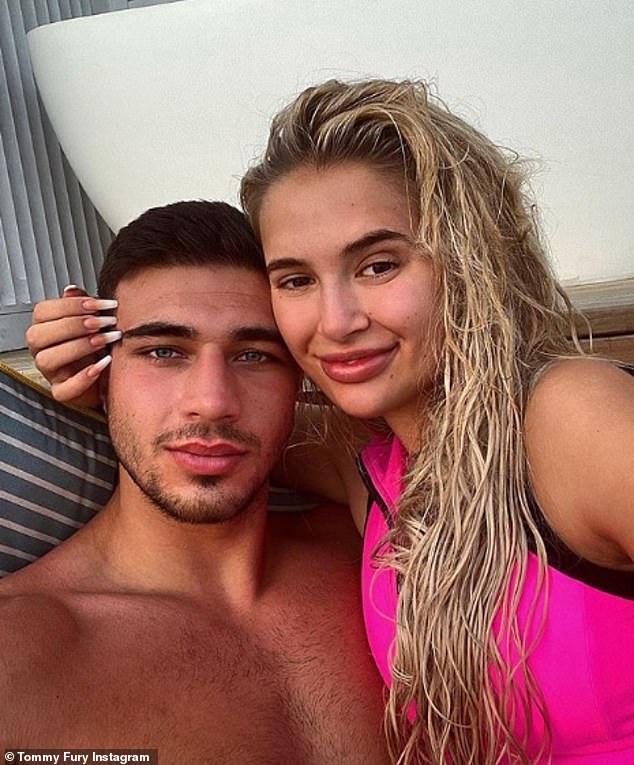 Loved-up Island: Tommy shared a picture to Instagram of himself and girlfriend Molly-Mae enjoying a holiday in the Maldives two weeks ago

The loved-up couple met on last year’s season of Love Island and have been smitten ever since.

In a recent clip from his ITV documentary: The Gypsy King, Tyson, 31, jumped for joy when Tommy asked Molly-Mae to be his girlfriend on ITV’s Love Island last year.

He jumped around his living room with delight alongside his equally-excited wife Paris, 30, who gushed: ‘She’s my new sister-in-law!’ 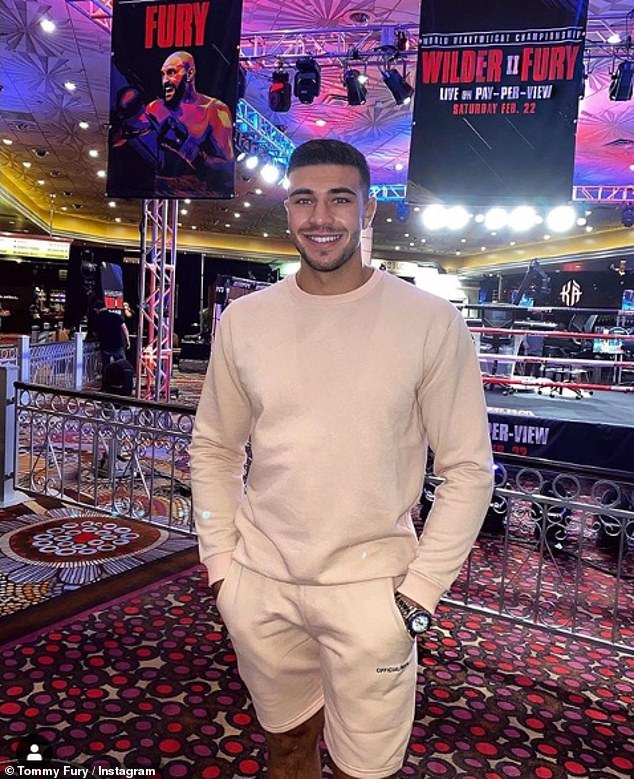 ‘Fight week’: Tommy shared a pictured to Instagram of himself at the Las Vegas ring where his brother will take on Deontay Wilder on Sunday 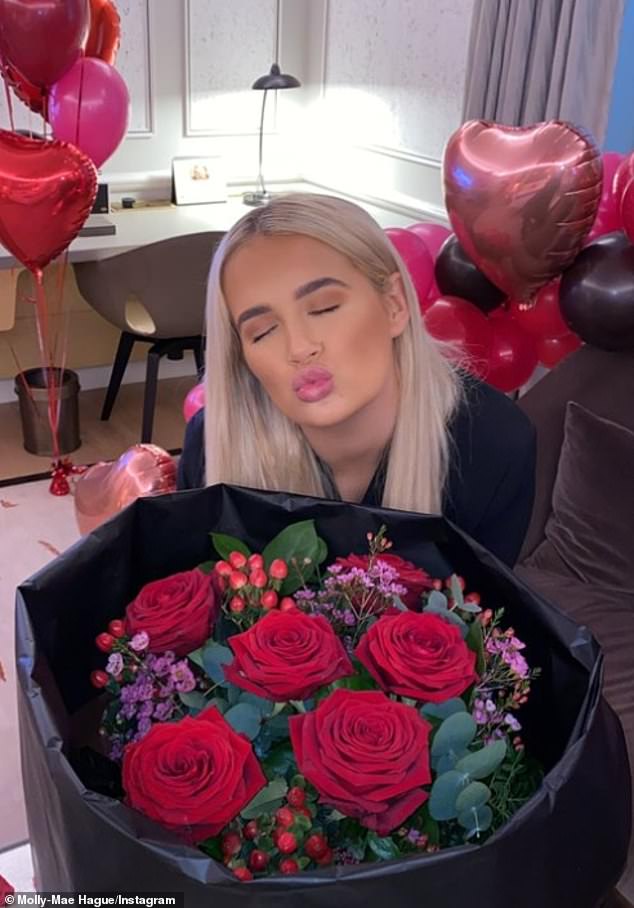 Love: It comes after Tommy surprised his girlfriend by decorating a suite at the Mandarin Oriental hotel in Hyde Park, London, for Valentine’s Day

Before entering the villa, Tommy seemed intent on following in his older brother’s footsteps.

Tommy previously told The Sun: ‘Love Island is what I’m known for, but make no mistake when I’m finished I’ll be known for being one of the best fighters to come out of Britain.’

The ring walk for Deontay Wilder and Tyson Fury rematch is expected to take place about 5am on Sunday UK time – which is 9pm in Las Vegas on Saturday. 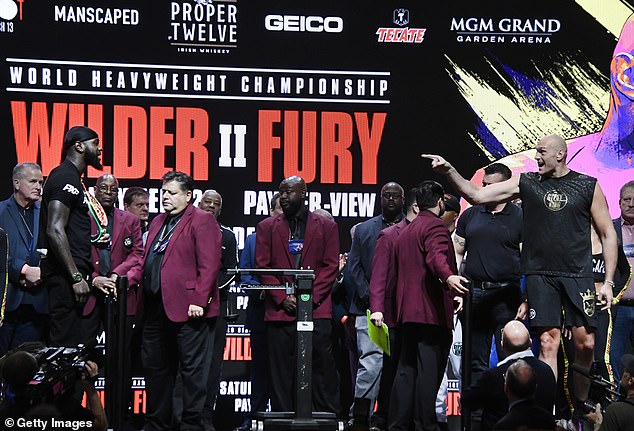 Ready to fight: Tyson Fury (R) exchanges words with Deontay Wilder (L) as the two were kept apart from facing off during todays weigh-in at MGM Grand Hotel, Las Vegas, on Friday