She’s no stranger to swimwear after spending the summer looking for romance in the Love Island villa.

And Harley Brash was back to her bikini-best as she hit the shores to flaunt her svelte figure while larking around on holiday in Marbella, Spain.

The reality star, 20, looked fantastic as she soaked up the sun in a tiny animal print two piece which displayed her perky posterior and toned abs to perfection. 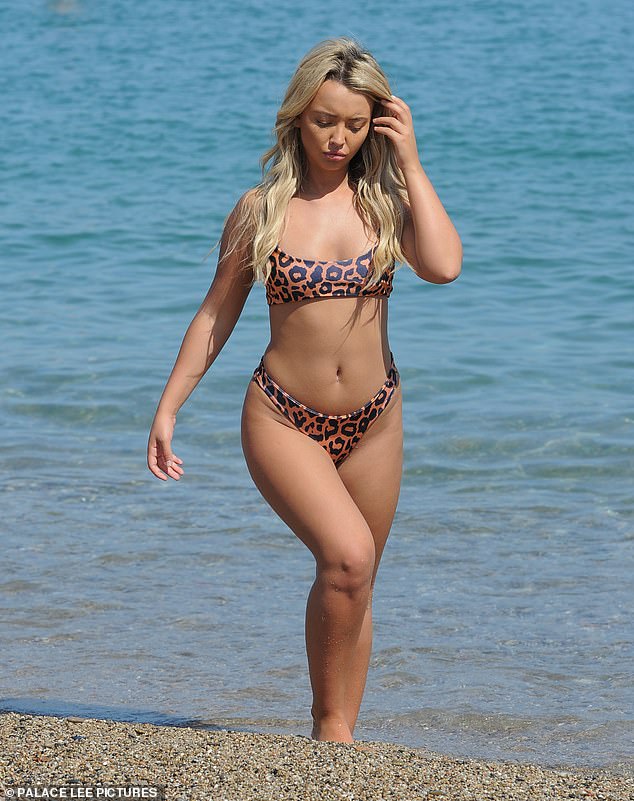 Stunning: Harley Brash, 20, showed off her toned and tanned physique as she strolled along the beach in a bikini in Marbella, Spain

Harley, who had coupled up with Chris Taylor on the hit ITV show but later became one of the first pairs to split, showed off her figure on the beach.

Her toned and tanned physique was emphasised by the high-waisted thong bikini which Harley confidently wore last Saturday.

She left her long blonde tresses down as she enjoyed some relaxation time and added a slight curl to her sleek hair to make for the perfect beach babe look.

Toned: The reality TV star opted for a thong style two piece which emphasised her assets 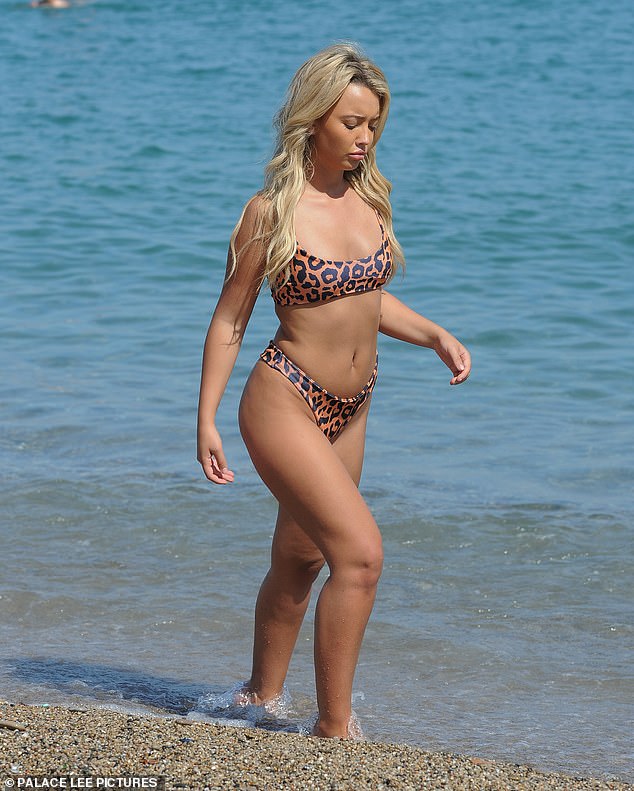 Glowing: She left her long blonde hair down as she dipped her toes into the clear water

The TV personality appeared to add a touch of makeup to her ensemble and looked polished to perfection with a touch of nude lipgloss.

After soaking up some time in Spain last weekend, Harley headed back to the UK and visited Republic night club in Leicester on Saturday. 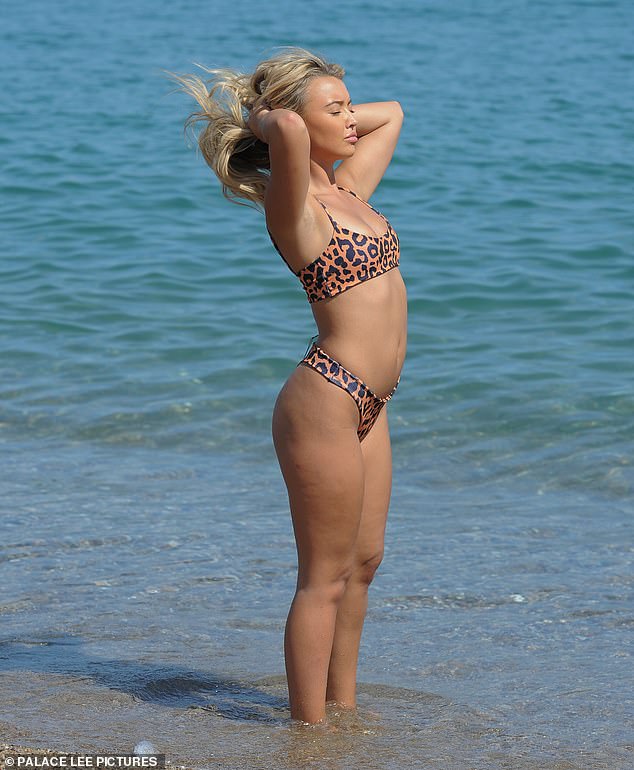 Sun kissed: Harley appeared to have added a touch of light lipgloss to complete her ensemble 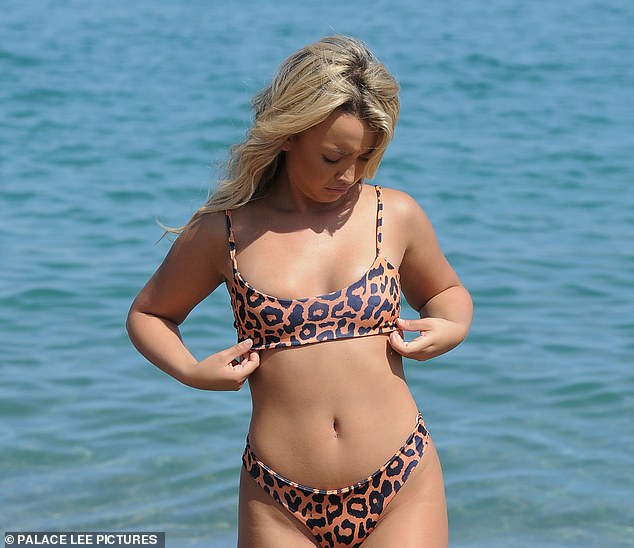 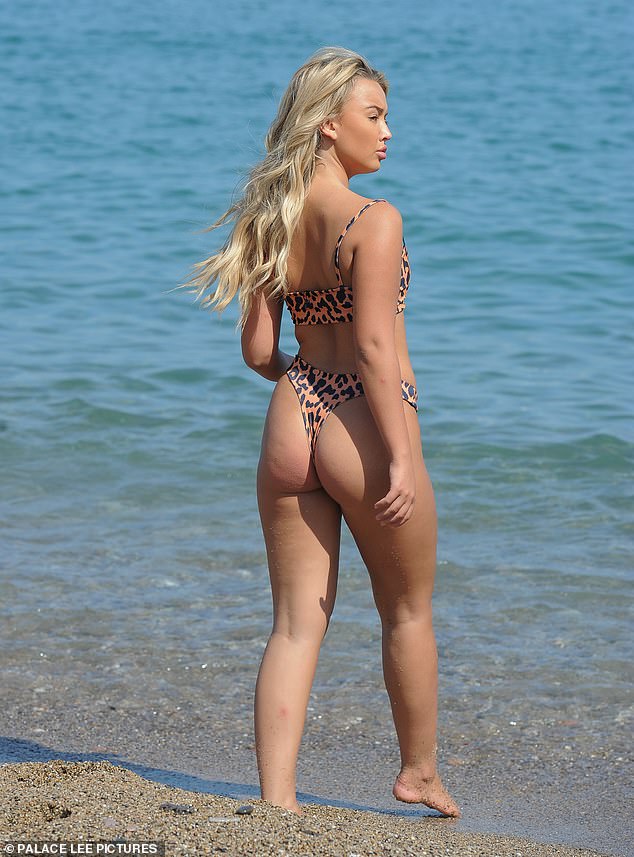 Tanned: Harley looked relaxed as she flaunted her assets and svelte figure in sunny Marbella

For the outing Harley added some laced heels and posed for photographs with a few of her Love Island fans.

Harley rose to prominence for her short-term romance with Chris on this year’s Love Island only for the pair to become the first couple to split from the series.

Speaking to Stephen Leng on Fubar Radio, Harley opened up about her break-up from the business development manager and admitted to kissing mystery boys. 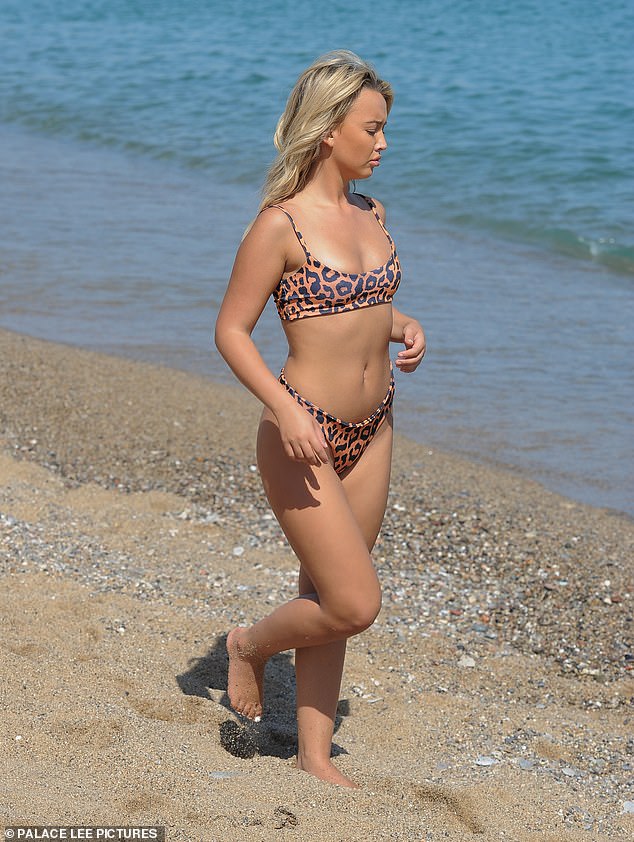 Fame: Harley rose to prominence after appearing on ITV show Love Island over the summer 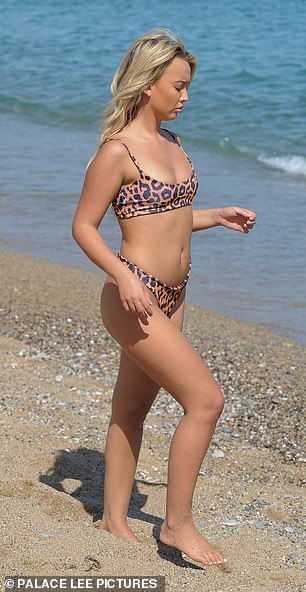 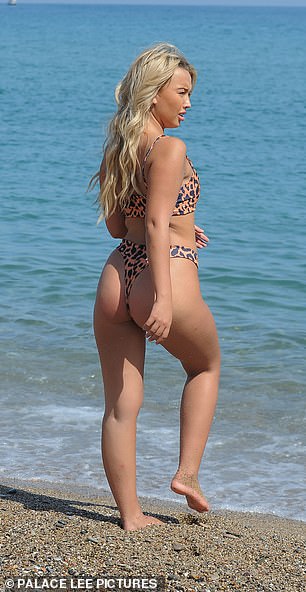 Flaunt it: The blonde bombshell looked like she was in her element as she walked along the sand before heading to the water to cool down 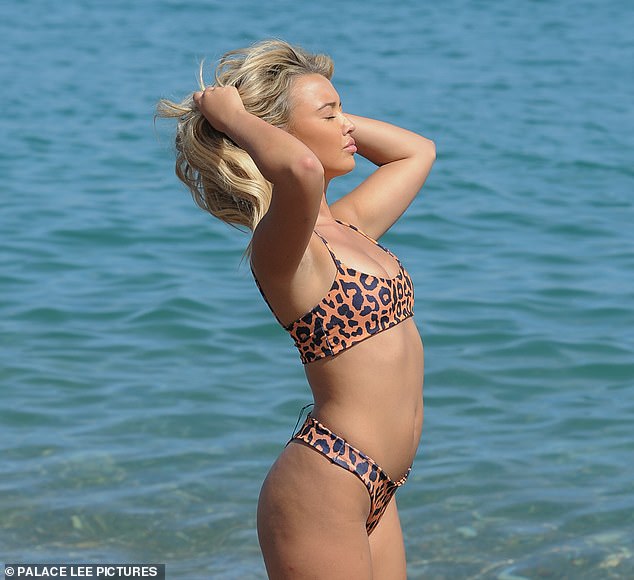 Beautiful: Harley has been single since splitting with fellow islander and business development manager Chris Taylor

She said last month: ‘I’m happy being single at the moment. I’m just enjoying myself. I’m having fun. I don’t kiss and tell but it is nice.’

On her split from the business development manager, Harley confessed: ‘We were just better off as friends…we had such busy schedules and we both realised that it was better to break it off now and we could still be friends.’

The TV star also praised her Love Island friendships: ‘Everyone has got everyone’s back and best interests at heart. It is like a little family. 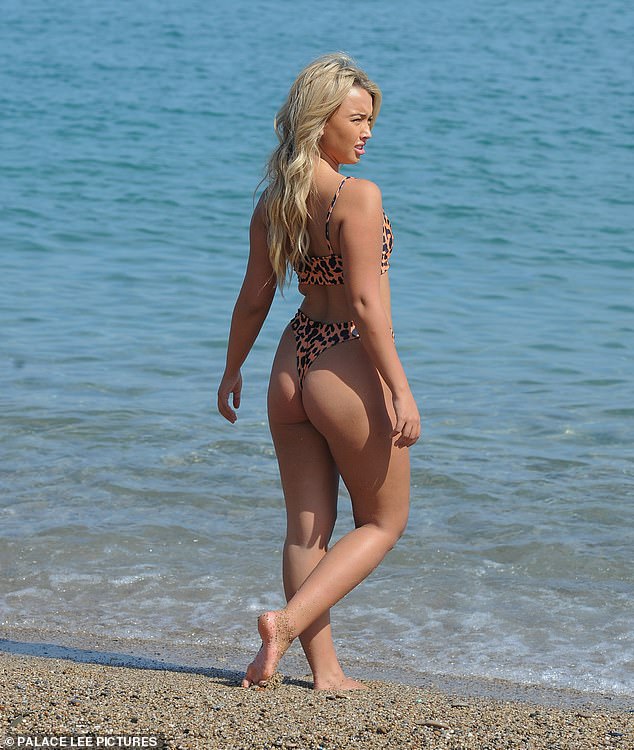 Pose: The former Love Islander looked fantastic as she paused on the beach during her stroll 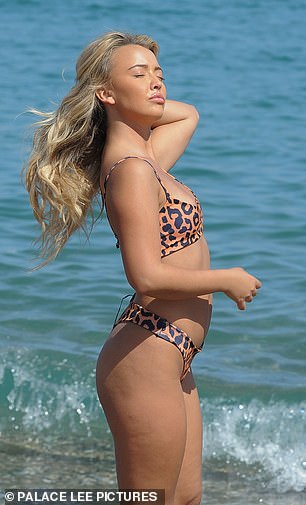 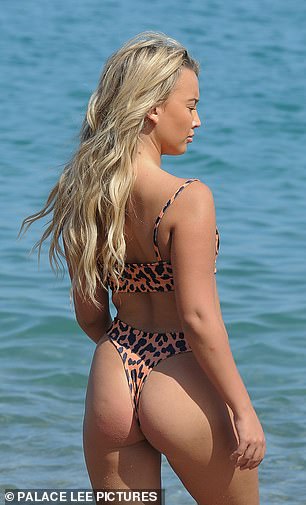 Sun soaked: The star’s high waisted bikini emphasised her assets, right, and she flicked her curled hair, left, behind her during the beach walk 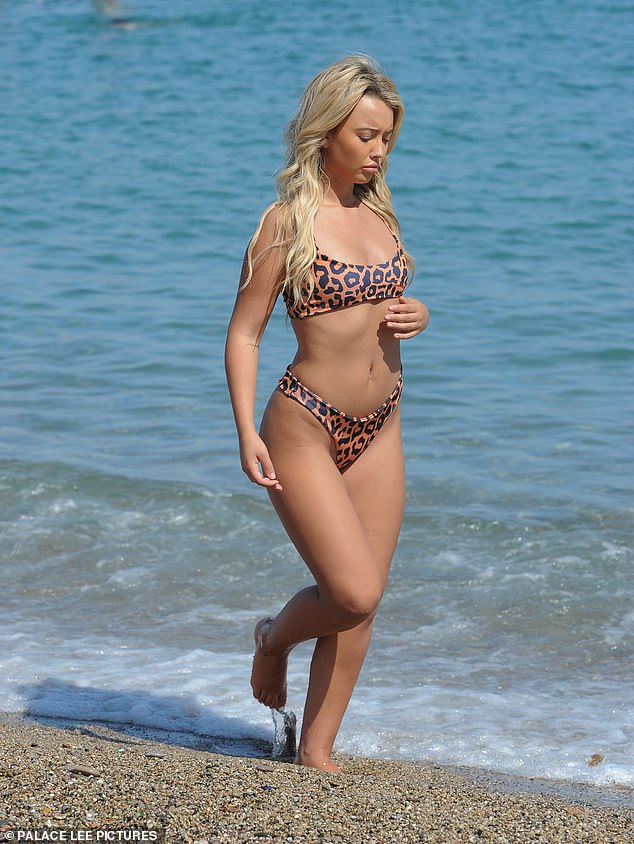 Short break: As well as taking a trip to Marbella, Harley has enjoyed time in Dubai this summer

‘I could ring anyone up from the show and be like, “look I’ve got this issue I’ve got this problem, can you help us out and give us a bit of advice” and not one person would say no.’

Since finding fame on Love Island Harley has been spotted at several events and looking stylish as she hits the town.

On October 8th she visited Bluebird Chelsea in London while wearing a silky white dress. 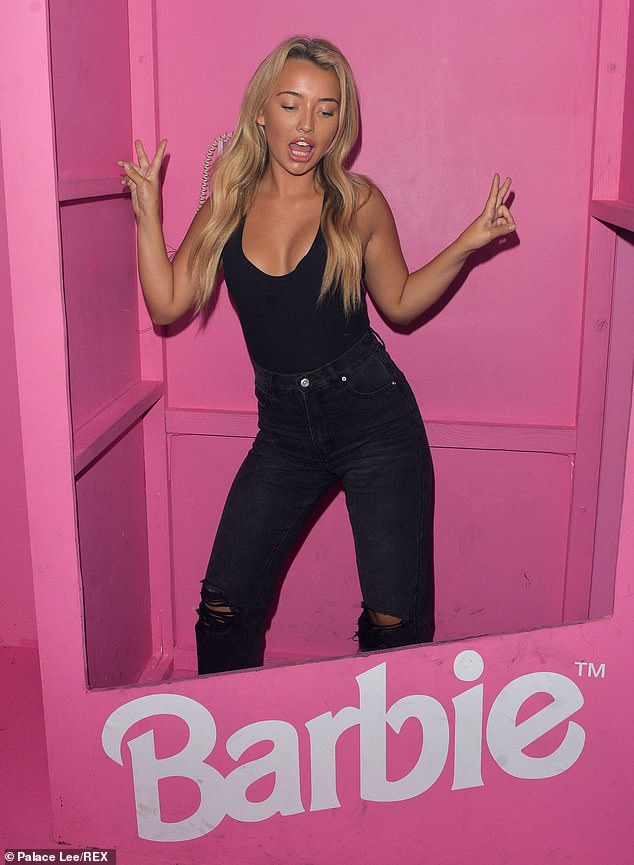 Work it: After soaking up some time in Spain, Harley visited Republic night club on Saturday 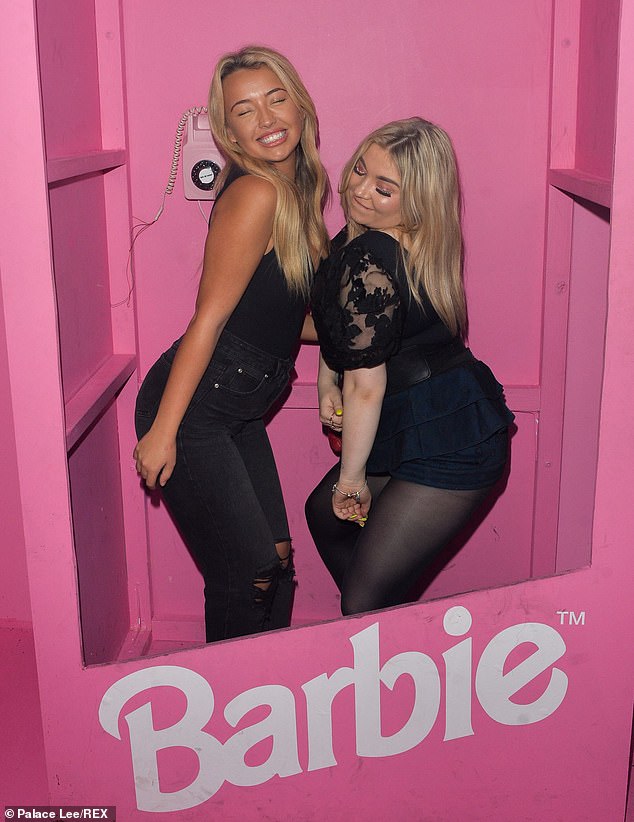 Strike a pose: Harley looked glam in ripped black jeans as she met with some of her fans

Harley exuded confidence in her off-the-shoulders number, working her best angles as she posed outside the venue.

The blonde bombshell matched her knee-high boots to her frock, making the most of her petite frame.

The starlet styled her long hair down straight and opted to wear no jewellery, letting her all-white outfit take centre stage. 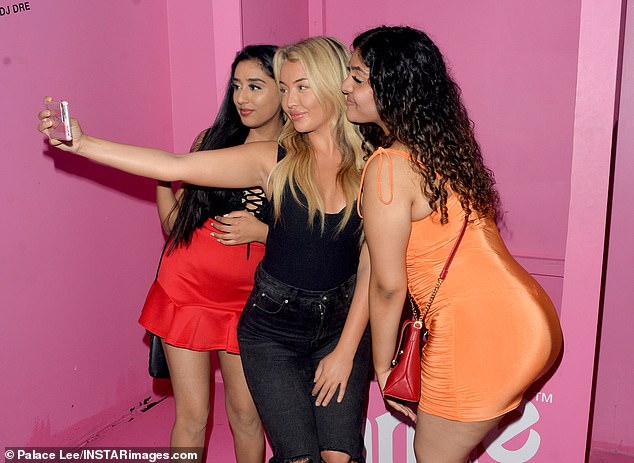 Selfie: The reality star took snaps with Love Island fans as she enjoyed a night in Leicester 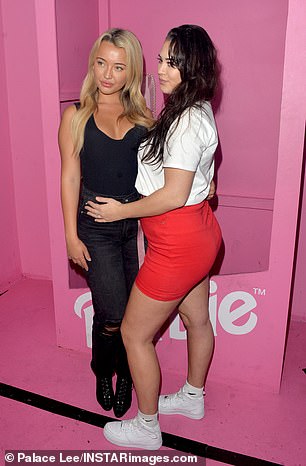 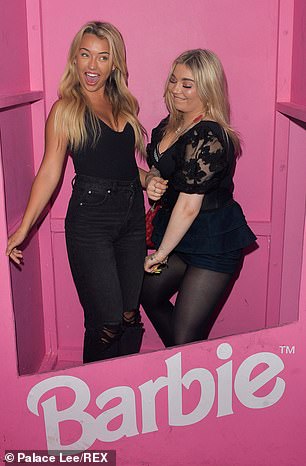 Fans: Harley wore her blonde tresses down for the night out and added a pretty pink lipstick