Love Island: Fans rejoice as ‘desperate’ Michael is AXED from the villa… before sharing sympathy for ‘unlucky’ Francesca after dramatic dumping

Michael Griffiths and Francesca Allen have been dumped from the Love Island villa.

The pair were finally axed from the show as the firefighters’ luck finally ran out, after he was brutally rejected by Amber Gill in the last recoupling.

Fans had a split response to the news as they rejoice that Michael would be leaving to face the wrath of his former partner Joanna Chimonides, but shared plenty of sympathy for ‘unlucky’ Francesca after she struggled to find love in the villa. 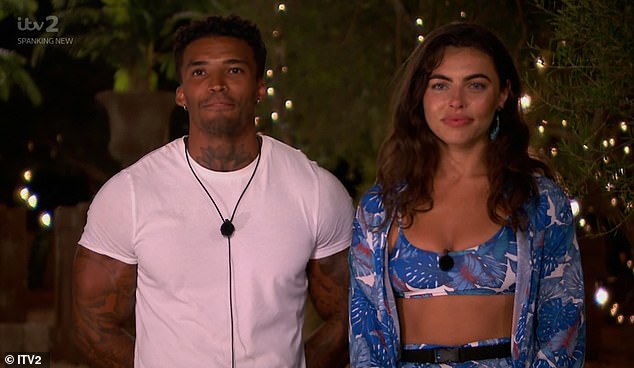 Gone: Michael Griffiths and Francesca Allen have been dumped from the Love Island villa, as the rest of the Islanders failed to save them in yet another dramatic vote-off

As romance was rife after Amber and Greg shared their first kiss, and Jordan finally asked Anna to be his girlfriend, the villa was stunned to learn that a dumping was on the horizon.

The results of the public vote revealed that Michael and Francesca, Chris and Harley and Anna and Jordan were in the bottom three, with one pair set to leave the Island.

But in a heart-stopping twist, it was their fellow Islanders who would decide which pair they wanted to save, and those with the fewest votes would be heading back to the UK. 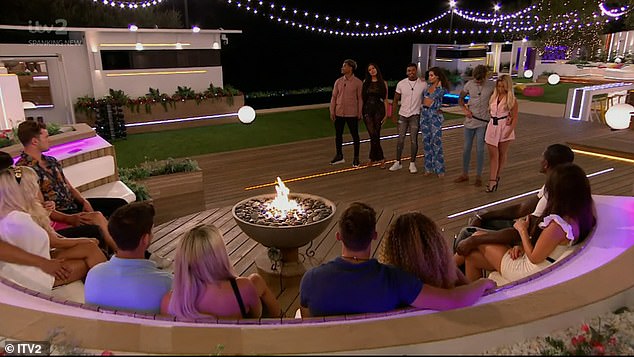 Leaving: After a public vote on Friday, it was revealed that the Islanders would have to choose which of the bottom three couples they wanted to save 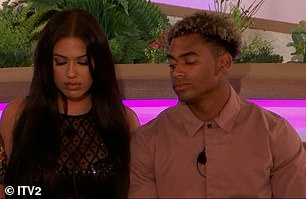 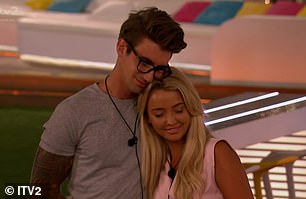 Close call: With four and one vote respectively, Anna and Jordan and Chris and Harley were both saved from being dumped 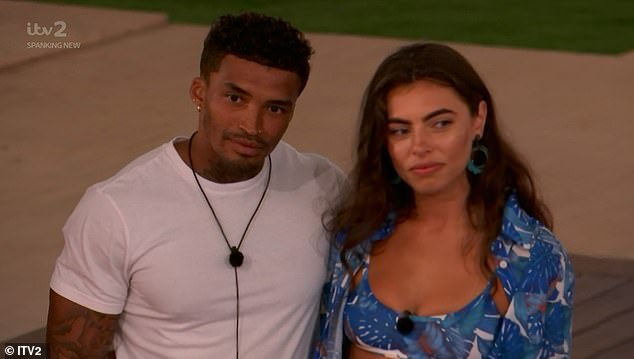 Off they go! With no votes, Michael and Francesca were soon dumped from the villa, which sparked a mixed reaction from fans

As Anna had asked Jordan to be his girlfriend just a day earlier, the decision was a no-brainer for several couples, as they insisted the pair deserved to stay on the show.

India and Ovie also opted to save Harley and Chris, which left Michael and Francesca with zero votes and thus they were dumped from the villa.

The news sparked a mixed reaction from fans, as while some were happy to see Michael’s impending exit, others insisted Francesca had a raw deal during her time on the show. 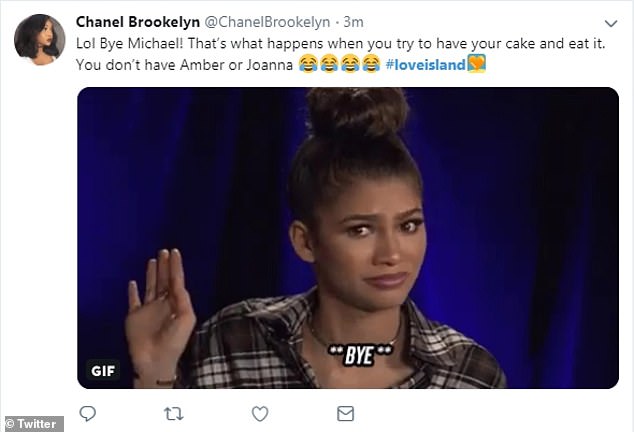 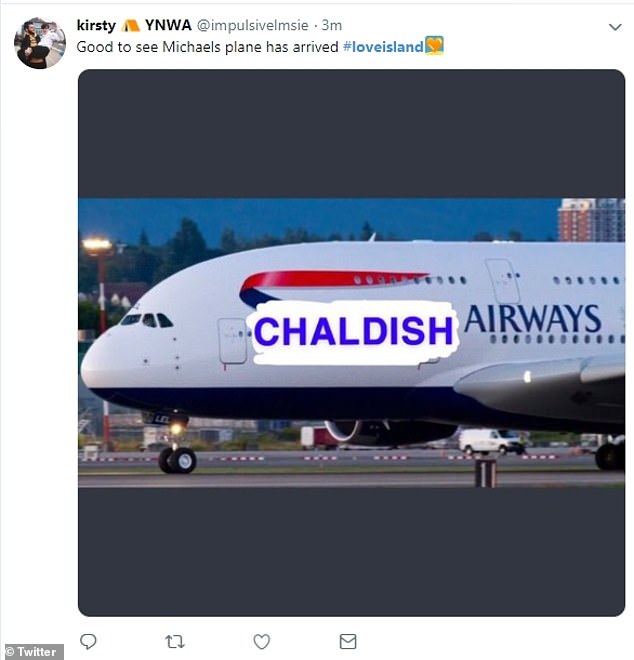 Farewell! Many fans were delighted to see Michael finally say goodbye to the villa after his treatment of Amber in recent weeks

One wrote: ‘Lol bye Michael! That’s what happens when you try to have your cake and eat it. You don’t have Amber or Joanna.’

Other fans shared sympathy for Francesca, who failed to have any real romance during her 12 days in the villa. 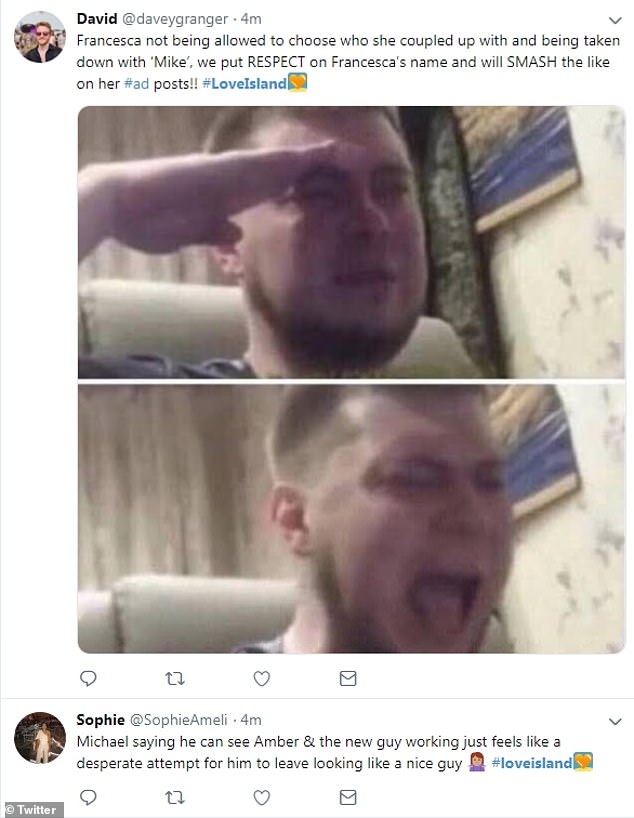 Such a shame: Other fans were quick to express their sympathy for Francesca, after she struggled to find any real romance during her 12 days in the villa

One tweeted: ‘Francesca was actually such a genuine girl… so underrated,’ while another added: ‘Unlucky for Francesca to go home she didn’t get much change to find someone.’

A third also shared: ‘Francesca is one of the best Islanders. It’s a shame that she’s been so unlucky.’

As he prepared to say goodbye to the rest of the villa, Michael was surprisingly content with the news of his departure, and decided to pull Amber aside for a chat to ensure they parted on good terms. 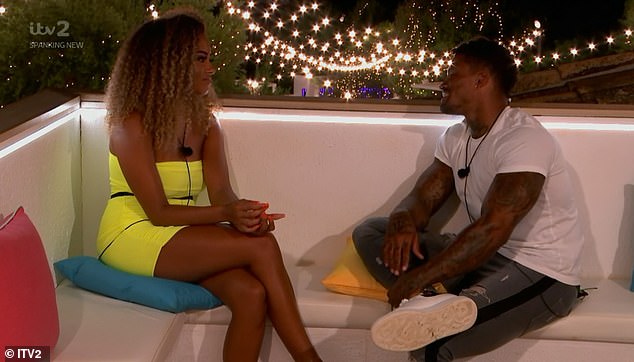 Fixing it: As he prepared to bid farewell to the villa, Michael had one last chat with Amber to ensure they parted on amicable terms

The hunk back-tracked on his previous claim that he didn’t see a future between her and Greg, and the pair ended things with a quick hug.

He said: ‘It’s the right time 100% obviously I know I wasn’t the nicest person over the last few weeks, but after seeing you and Greg more I do see you working.

‘It makes me happy seeing you happy. I just didn’t quite see it and now I see it more.’

No! The move did not sit well with many fans, who insisted he was trying to rebuild his image 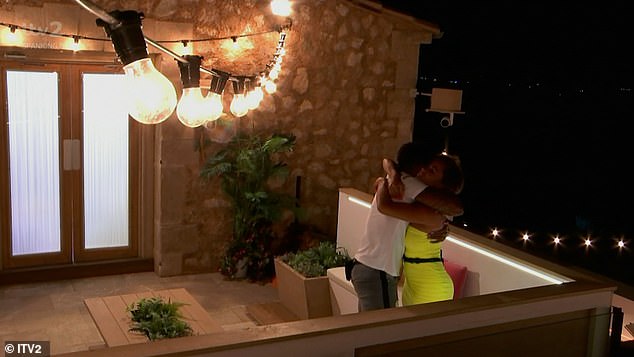 Mending: After a quick hug the pair parted on amicable terms, and Amber is now free to pursue her romance with Greg

However the move did not sit well with many fans, who insisted he was trying to rebuild his image after being slammed by viewers for his treatment of Michael and Joanna.

Following his exit, Michael expanded on that final chat with Amber in an exclusive interview with MailOnline, saying: ‘Me and Amber spoke and I knew I was directing my frustration at her and when it was happening I was always thinking to myself, “why am I doing this?” because I’m literally just hurting a friend.

‘Amber was reminding me of past relationships and stuff like that and I did speak to her about it and it was something that I didn’t really want to put myself through again.

‘Amber knew I was directing my frustration at her… Speaking about it was pretty nice to be honest and we’ve left things on a really high note and we are actually friends.’ 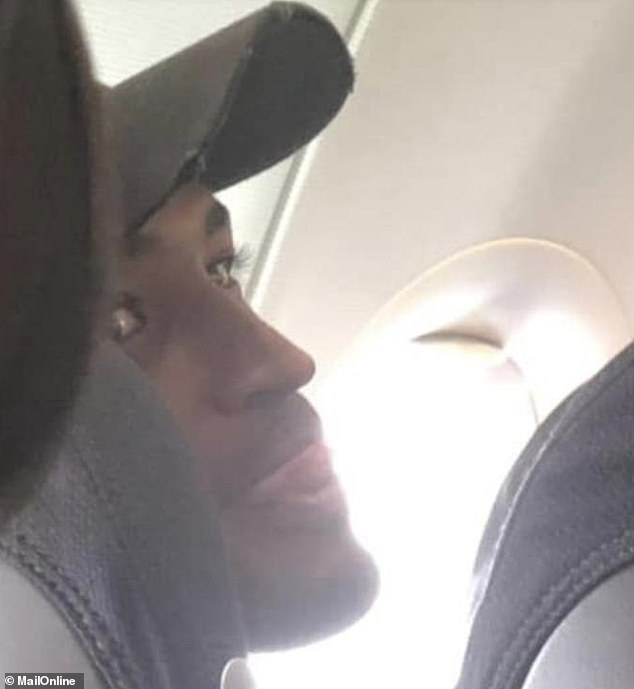 Look who it is! Following his departure, Michael was also spotted jetting back to the UK after a turbulent seven weeks in the villa, with a source saying he ‘seemed slightly glum’

Following his departure, Michael was also spotted jetting back to the UK after a turbulent seven weeks in the villa.

Attempting to his his identity with a baseball cap, a source told MailOnline: ‘Michael wasn’t chatting to people, he looked slightly awkward that people had seen he’s left and therefore Amber had chosen Greg.

‘To be honest he seemed slightly glum.’ 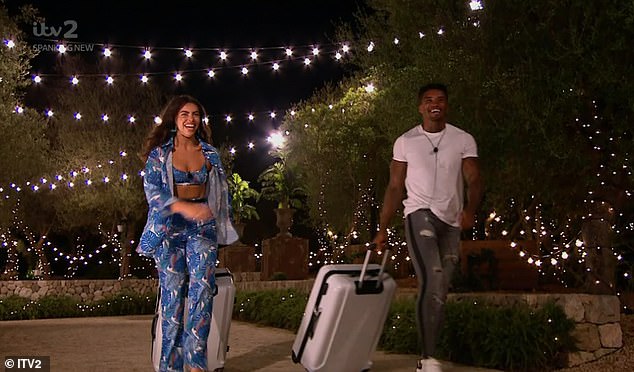 Questions: Francesca exclusively told MailOnline she thinks Michael’s former flame Joanna should give him another chance

It now remains to be seen whether Michael will rekindle his romance with Joanna on the outside, especially as Francesca also admitted she should give him another chance.

Speaking exclusively to MailOnline she said: ‘I do think Joanna should give him a second chance. I think Michael is a really good person. He just made a mistake and its really difficult in there as your emotions are heightened in a different way.

‘You can get a little bit confused because you have everyone else’s opinions as well. From what I saw they were great together, they got on really, really well.’

Love Island continues on Monday at 9pm on ITV2. 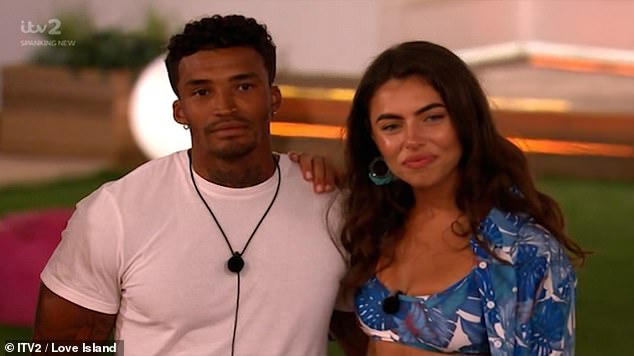 Back soon: Love Island continues on Monday at 9pm on ITV2