Love Island: Outraged fans demand ‘justice’ for favourites Siânnise and Luke T after they lose out on the coveted top prize to Paige and Finn

Love Island viewers took to Twitter in droves to express their outrage at Siânnise Fudge and Luke Trotman missing out on the top prize on Sunday night.

Despite being the bookies’ favourites to take the title at the conclusion of the ITV2 show’s first ever winter season, fans were shocked when Paige Turley and Finn Tapp – themselves another popular couple – were crowned the winners instead.

As the closing credits rolled, one fan tweeted: ‘Time to write 40 complaints to Ofcom under the name Karen Smith for justice for Siannise and Luke T.’ 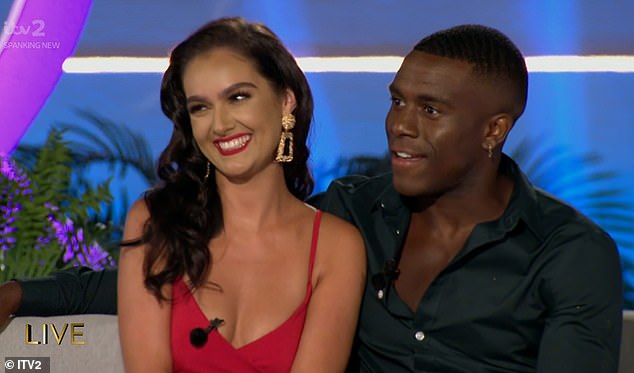 Outraged fans: Love Island viewers took to Twitter in droves to express their outrage at Siânnise Fudge and Luke Trotman missing out on the top prize on Sunday night

‘The fact that Luke T and Siânnise didn’t win just confirms that this has really been one of the worst seasons, y’all had ONE job,’ wrote a second.

Paying tribute to Bristolian Siânnise, another fan wrote: ‘Siannise, house of fudge, CEO of Disney, queen of sass, thank you for being the sole source of entertainment over these last 6 weeks, don’t know what we would’ve done without you Queen.’ 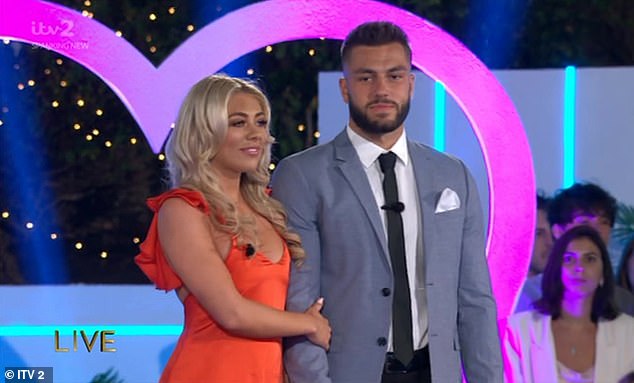 Winning couple: Paige Turley and Finn Tapp – themselves another popular couple – were crowned the winners instead during Sunday night’s season finale 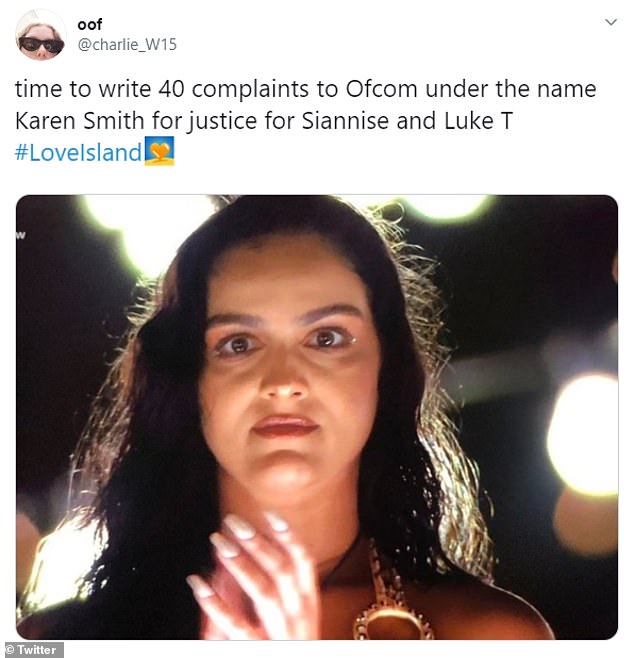 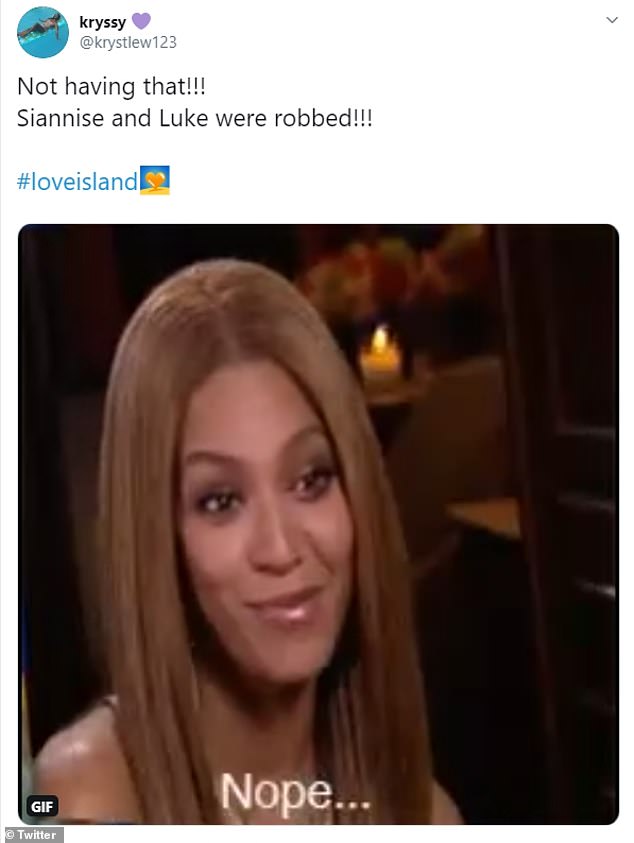 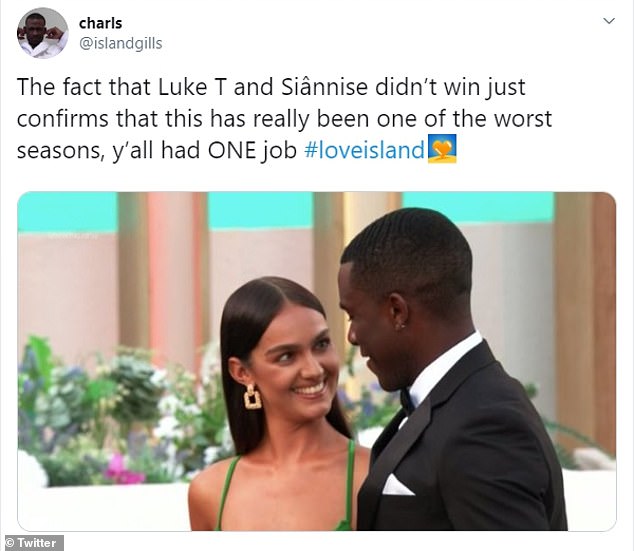 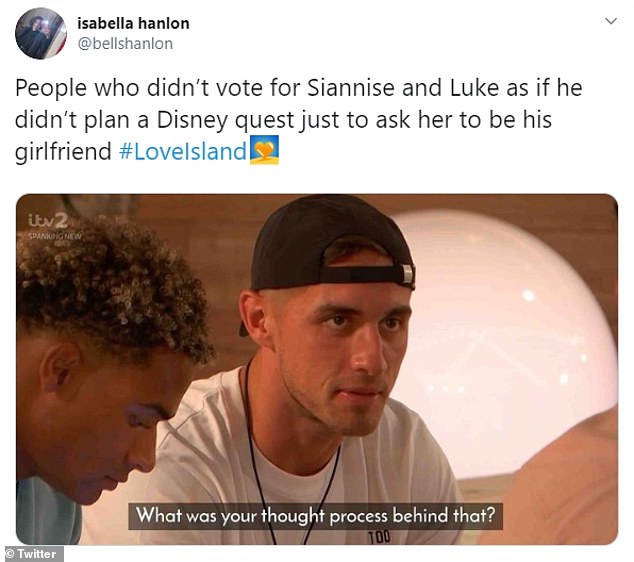 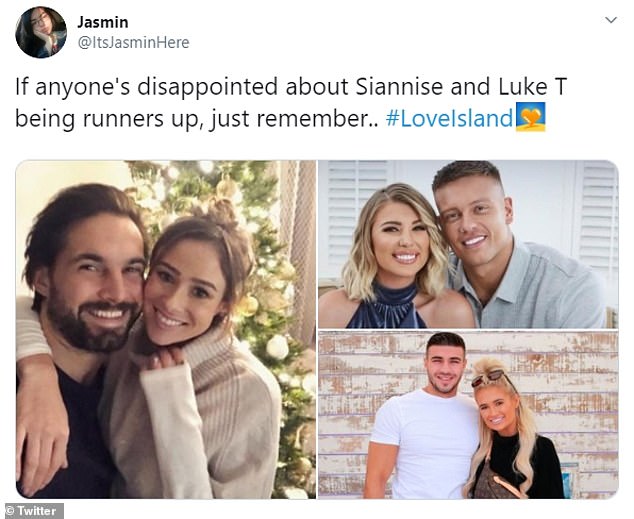 Express yourself: Within moments of the winners being crowed, fans took to Twitter in droves to express their outrage at the decision

Coral bookmakers had Siânnise and Luke T tipped as the overwhelming favourites to take the top prize during the final with odds of 1-4.

Finley and Paige were the second favourites at 11-4, with Luke Mabbott and Demi Jones 14-1 to win and Ched Uzor and Jess Gale 40-1.

In the hours leading up to the final, Coral’s Harry Aitkenhead said: ‘The final of Love Island’s first ever winter series is here and we think there’s one couple who are streets ahead of the others in the race to victory.’

Siânnise’s journey on Love Island saw her go from being one of the show’s least popular contestants – when she rebuffed Nas Majeed’s romantic overtures – to becoming one of the most adored. 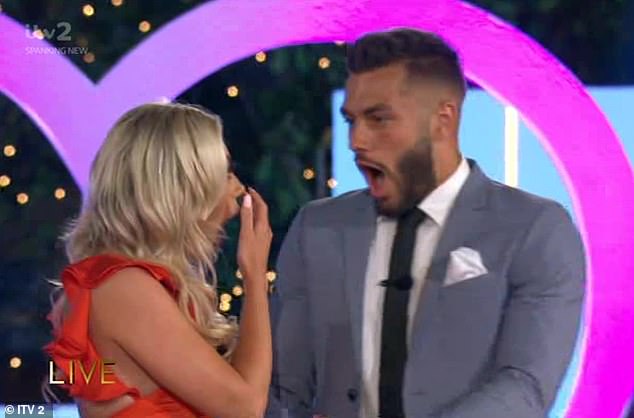 Big money: Paige and Finn, who became a couple early on in the show, split the £50,000 prize 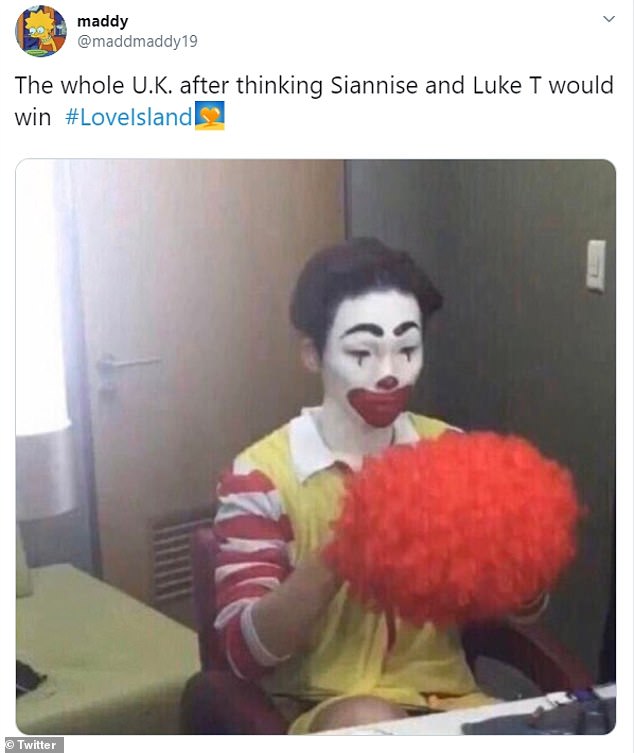 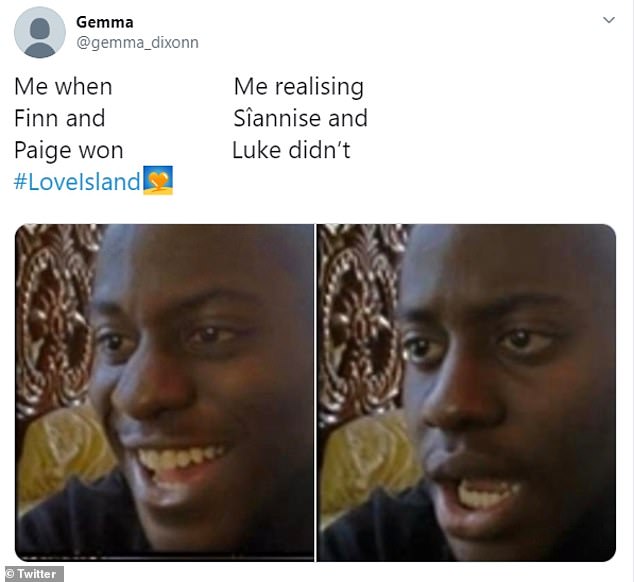 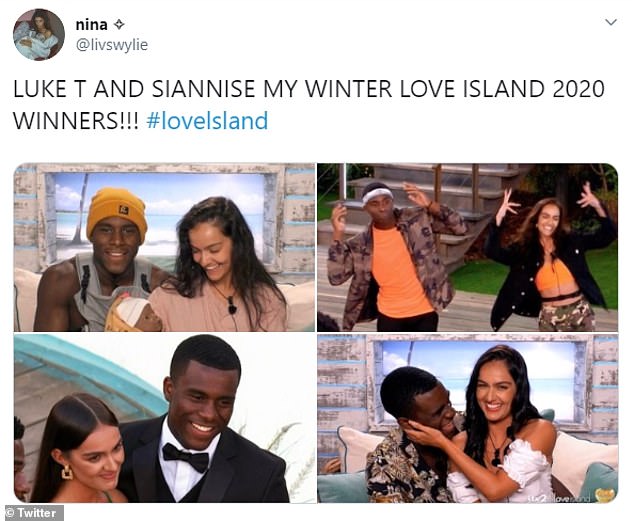 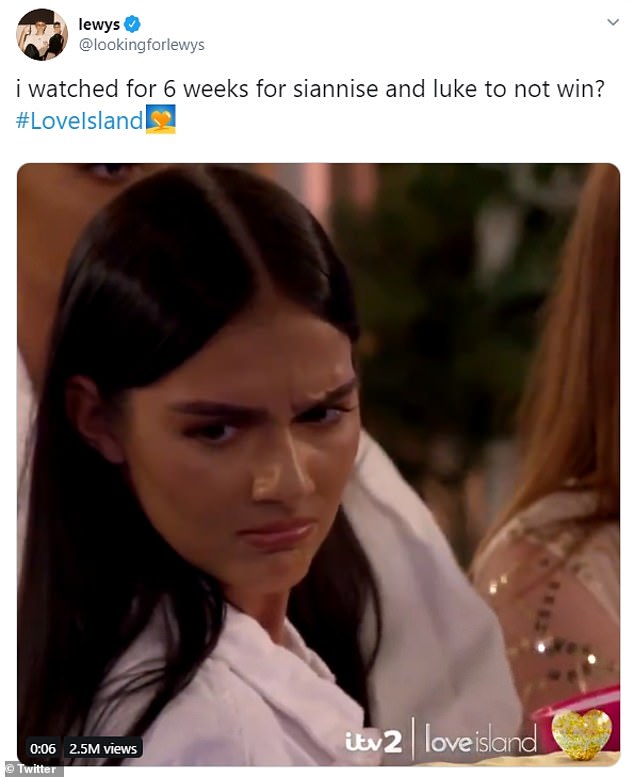 Favourites: It appeared that Siânnise and Luke T were not only the bookies’ favourites to win, but also the viewers’ choice

Following a bumpy start, where Siânnise struggled to secure herself a love interest, she went on to have fans rooting for her as her relationship with Luke T went from strength to strength, even while he was coupled with Rebecca Gormley.

Once the pair finally got together, they were seen sharing their mutual interest in Disney films and pining for one another amid the temptations of Casa Amor week.

As the season came to a close, they made things official when Luke asked Siânnise to be his girlfriend. They also expressed their love for one another.

During Sunday night’s finale, Paige and Finn were seen scooping the £50,000 cash prize – which they chose to split – also knocking Demi Jones and Luke Mabbott and Jess Gale and Ched Uzor out of the running, who came third and fourth respectively. 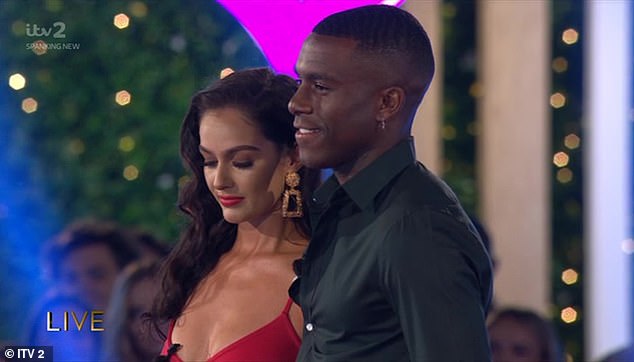 Blossoming romance: Siânnise and Luke T left the show as official boyfriend and girlfriend, and even expressed their love for one another 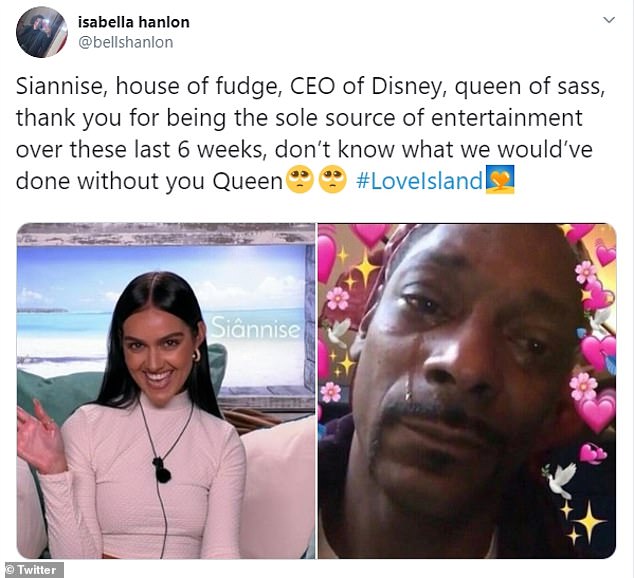 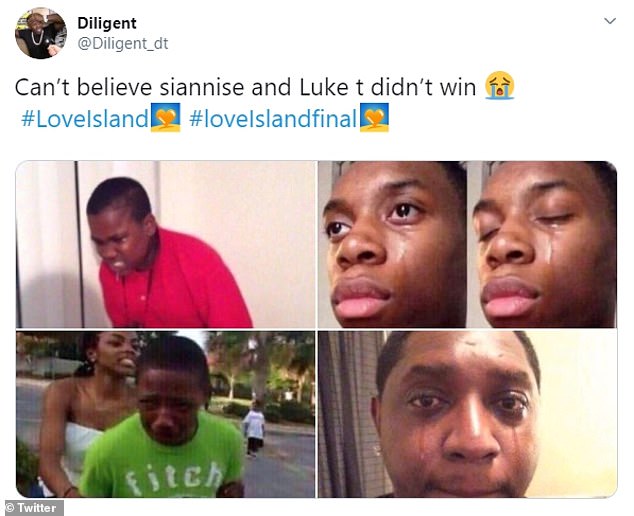 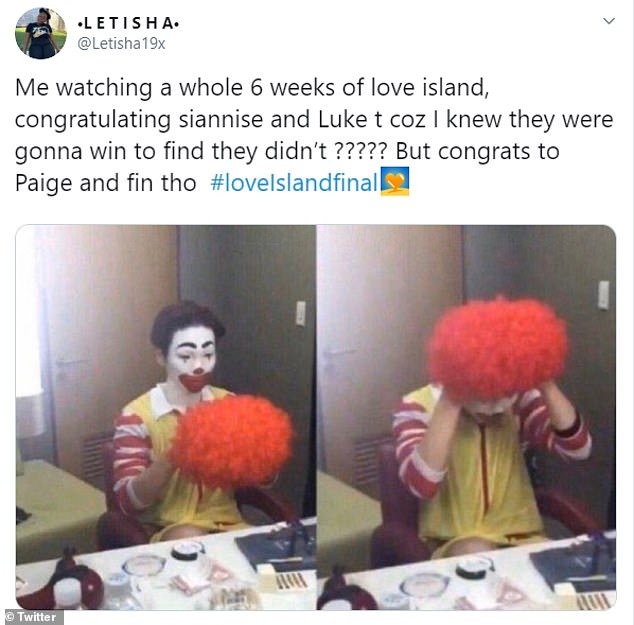 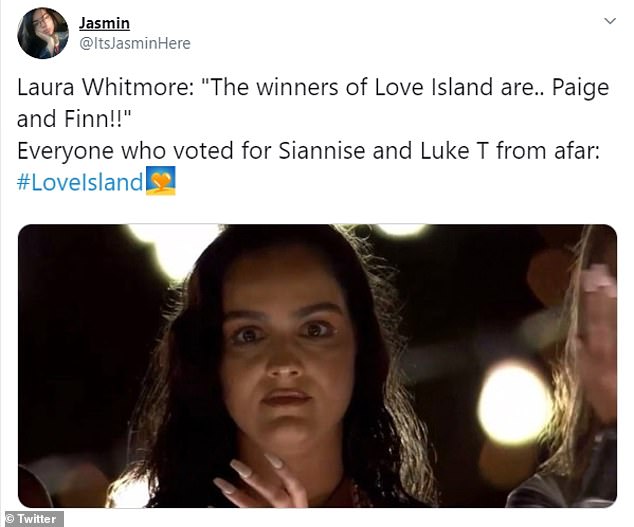 Odds-on favourites: Coral bookmakers had Siânnise and Luke T tipped as the overwhelming favourites to take the top prize during the final with odds of 1-4

This followed emotional scenes aplenty – including a tribute to the late presenter Caroline Flack, who killed herself last Saturday at home in London.

Paige, 22, and Finn, 20, looked delighted to be announced the winning duo – despite fans and bookies gunning for Luke T and Siânnise to take home the win.

Gobsmacked Finn declared, ‘How the f**k have I blagged that?’, after host Laura Whitmore announced them as the series champions.

They then each selected an envelope – with Paige taking the one with the £50k prize in it. She chose to split it with Finn, who declared that it was going towards a flat in Manchester for them both, having already discussed moving in together. 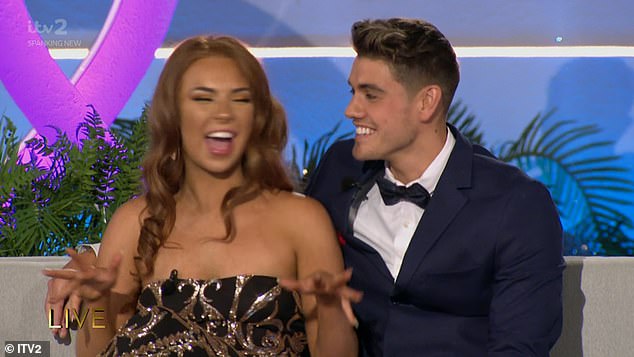 Before it was announced, Laura interviewed the final two couples, with Paige revealing she worried Finn was dumping her when he was in fact asking her to be his girlfriend.

‘At first I thought he was dumping me. Then he asked me to be his girlfriend. It was lovely,’ she said, before adding: ‘I want us to get a dog.’

When Laura asked if she should be buying a hat – for a wedding – Finn nodded and said yes.

The hunk missed the point of Laura’s remark, suddenly backtracking and saying ‘oh, no!’ as Paige boasted she now had a husband. 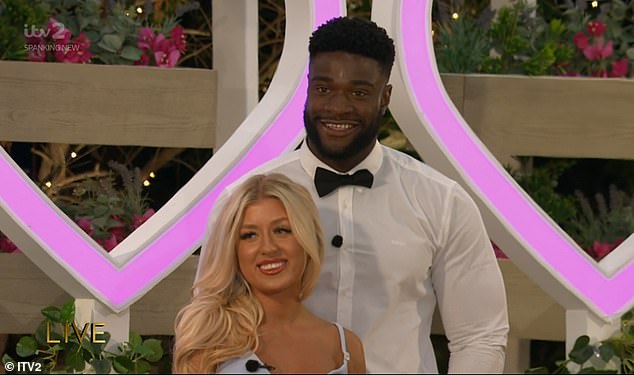 Reciting a speech to the Scottish blonde at the Love Island Prom, the hunky contestant said through tears: ‘You said we should say it when it feels right… Well, Paigey, I love you.’

Laura Whitmore opened the finale with an emotional tribute to former-host Caroline, who took her own life last week.

Laura continued a theme she began last week by wearing a heart emblem on her ensemble – a tasteful red trouser suit.

She had taken to Twitter ahead of the live final to dedicate the show to Caroline – who died, age 40, at her home in east London on February 15. 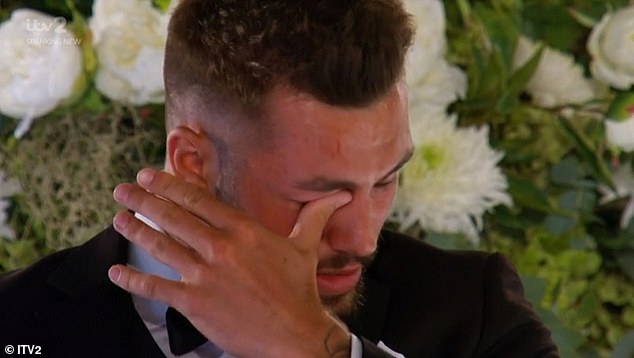 In love: Finn burst into tears on Sunday’s finale, as he told Paige that he is in love with her 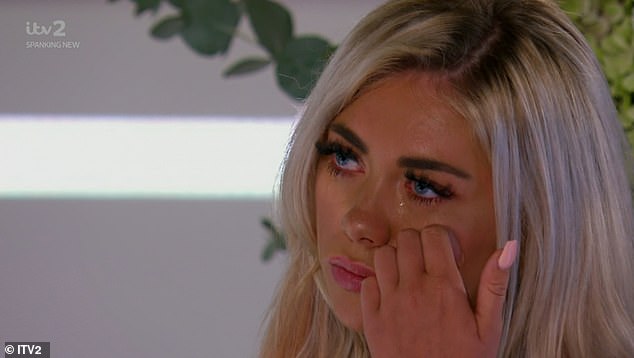 Tears: Reciting a speech to the Scottish blonde at the Love Island Prom, the hunky contestant said through tears, ‘You said we should say it when it feels right… Well, Paigey, I love you’

She continued to honour her friend on screen.

Holding back tears, she said: ‘The past week has been extremely difficult coming to terms with the loss of our friend and colleague, Caroline.

‘We are thinking of her family and everybody who knew her at this time. Caroline loved Love Island. She loved love, and that’s why tonight’s final is dedicated to her.’

Viewers were then shown a video montage of Caroline’s best bits on the ITV2 dating show, including her infamous slow motion walking as she entered the villa. 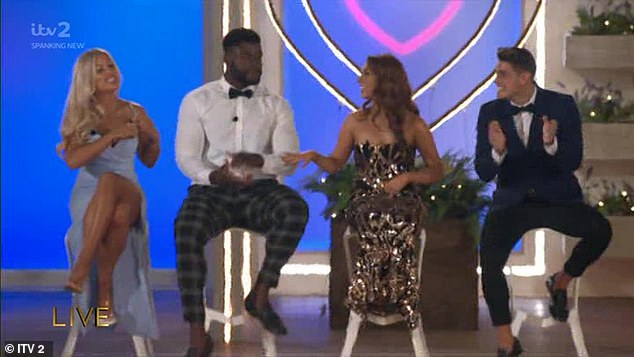 Going glam: The finalists looked glam as they dressed up in their best gear for the grand finale

Bosses of the show confirmed they were to pay tribute to Caroline Flack in the final, whilst also revealing the remaining eight contestants were told about the tragic news off camera.

A representative for the show said: ‘There will be a dedication to Caroline in tonight’s final episode. The Islanders have been informed about Caroline off camera ahead of the final.’

A day before her passing, the TV star had been told that the CPS was pursuing the court case against her following an arrest at her home over a row with boyfriend Lewis Burton in December.

Her management company have criticised the CPS for pressing ahead with what it called her ‘show trial’ even after Lewis said he did not support it. 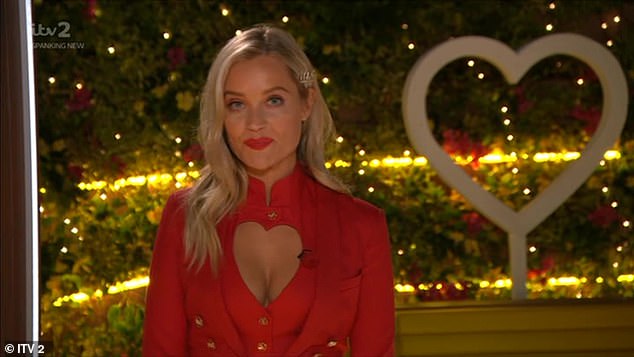 She had pleaded not guilty to assault by beating at Highbury Corner Magistrates’ Court in North London on December 23 and was due to go on trial at March 4.

The ITV veteran fronted the much-loved show since its revival series in 2015, before handing over her role to pal Laura Whitmore in late 2019.

The Geordie beauty, 22, and the Irish hunk, 24, became the fastest ever show winners to part ways after he dumped her by text in early September. 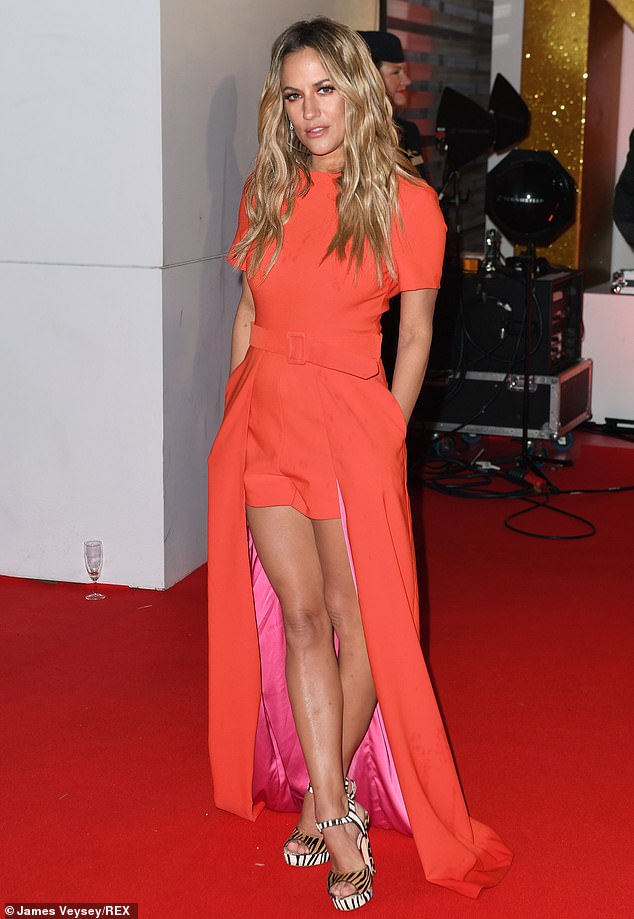