Lorraine Kelly was left stunned as a jaw-dropping naked snap from her reported heyday was unveiled by Piers Morgan as they celebrated her incredible 35-year career.

The Scottish chat show favourite, 59, couldn’t contain her shock as Piers, 54, unveiled the image from her days as a newspaper reporter.

Lorraine was also quizzed by Piers about the hilarious time that she hosted her show following a boozy lunch with John Hannah, and explained that due to her giddy state she decided to stay up so she would make it to filming on time at 4am. 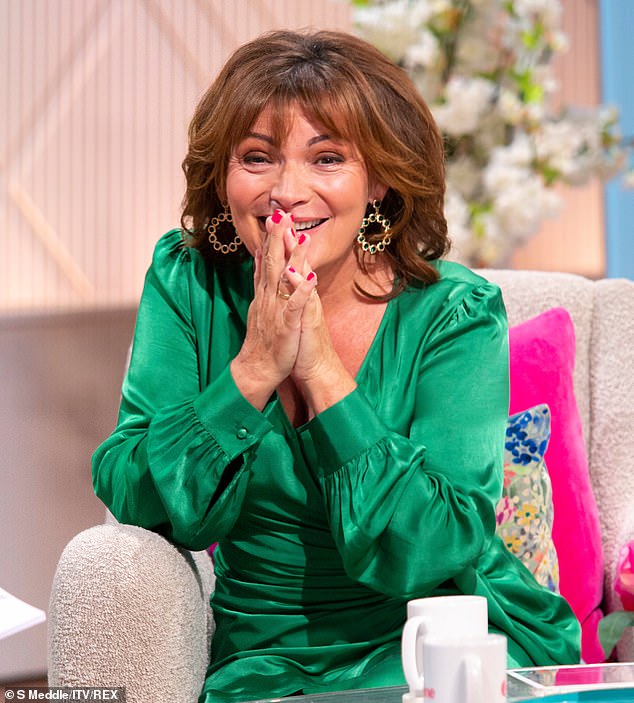 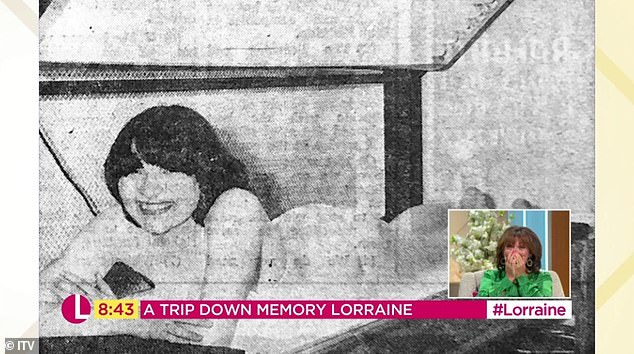 What is that? The Scottish chat show favourite couldn’t contain her shock as Piers unveiled the image from her days as a newspaper reporter when she tested out a sunbed

In a This Is Your Life- style lookback, Piers introduced a montage of Lorraine’s best moments, which included a stint of her time as a newspaper columnist.

He said: ‘What do you remember about your woman’s weekly pages that you used to knock out? Do you remember saying this? ”It’s now the latest craze sweeping Scotland. You can try out a special sunbed that toasts you a beautiful golden brown on both sides.”

Clearly aware of what was to come, Lorraine then squealed: ‘No, please no!’ before a black and white photo appeared of the host testing out the sunbed in question.

The Scottish star was mortified to see the image again, as she reflected on her amazing success. 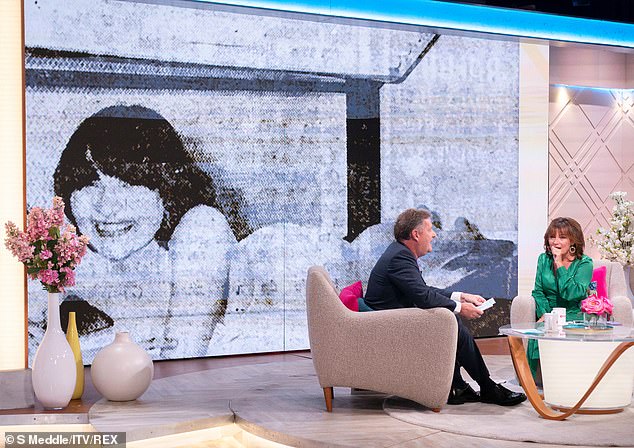 Old times: During the lookback, Piers shared a black and white image of Lorraine from when she tested out a sunbed during her days as a newspaper reporter

Lorraine also recalled the hilarious story behind the show she presented following an afternoon of drinking.

She explained to Piers: ‘I wasn’t drunk as a skunk, I was merry, it was with John Hannah to celebrate the fact he’d got a part in Four Weddings and a Funeral.

‘I never went to bed. You know how sometimes you can drink yourself nearly sober… any normal person would have phoned up and said, ‘I’ve had terrible food poisoning’. I’ve got this thing, I’ve got to go to work. Nobody noticed.’ 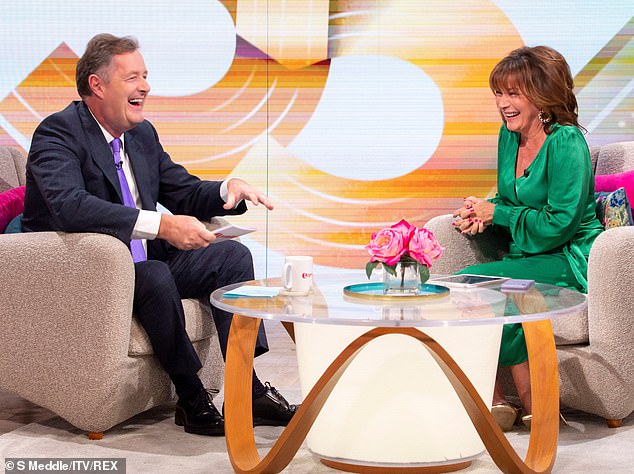 Hilarious: Lorraine also recalled the hilarious story behind the show she presented following an afternoon of drinking 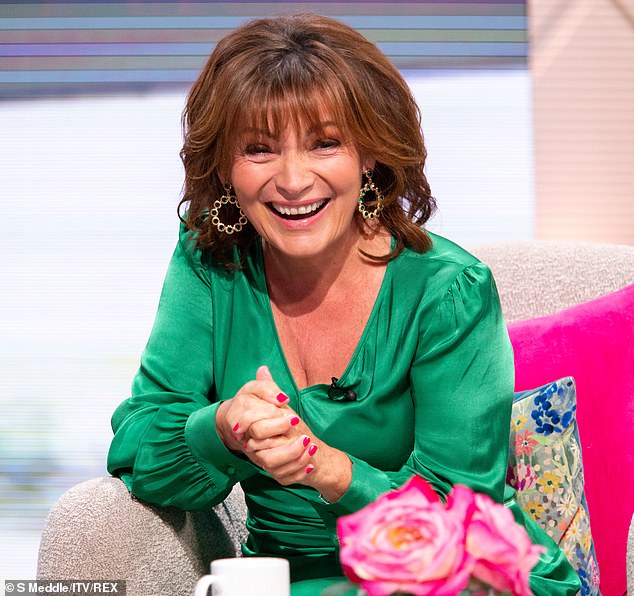 Funny: The presenter explained that she had been enjoying a boozy lunch with John Hannah in the early 90s, and rather than going to be stayed up until she had to be in work at 4am

John himself also sent in a video message to congratulate Lorraine, saying: ‘Congratulations for getting away with it for 30 odd years… let’s just keep bluffing, eh?’

Lorraine also offered the secret to her incredibly youthful appearances exactly two months ahead of her 60th birthday.

She said: ‘I don’t take care of myself, really. I try really hard. I like a glass of wine. I do [Zumba], hot and sweaty, I do that… it’s motivation. I’ve inherited from my mum, she’s got amazing skin, and she looks really good, I think it’s that.’ 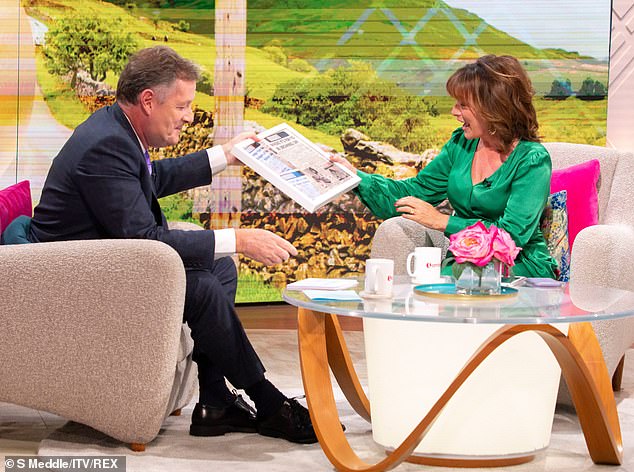 Honoured: Piers touched on Lorraine’s early days as a news reporter and later correspondent in Scotland, and presented her with a frame of one of her earliest pieces 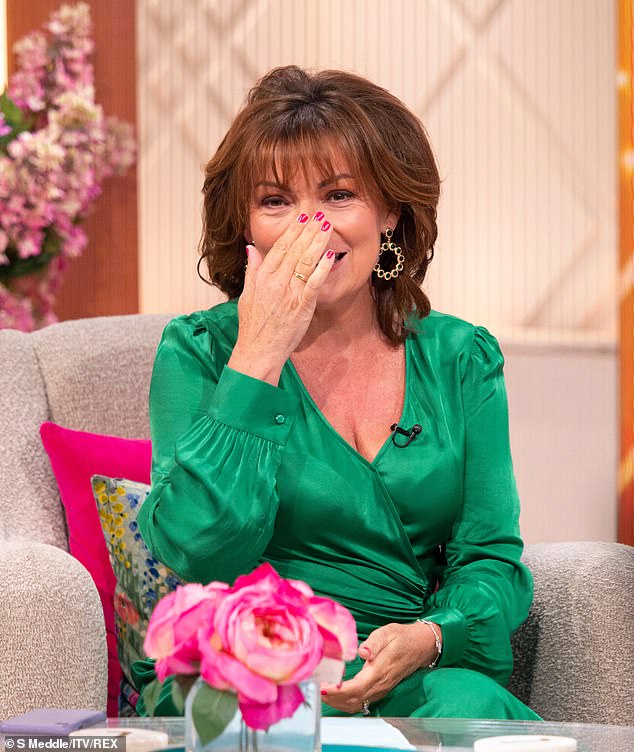 Awkward: She also spoke about some of her most and least favourites guests in over 30 years of presenting, Among the low-lights were Kevin Spacey and Bruce Willis, she said

Piers then handed over the show to Dan Wootton who asked Lorraine about her least favourite celebrity guests.

The star admitted she wasn’t impressed by some of Hollywood’s biggest stars, including Kevin Spacey.

She explained: ‘Kevin Spacey, he was horrible. Just very arrogant. I didn’t like him at all. Harrison Ford, I don’t think he particularly liked the movie he was promoting, and he just wasn’t really happy. I think that’s what it was and he was fed up.

‘Bruce Willis was just weird. The Two Ronnies, they used to do this sketch, they would answer the question beforehand so it was disjointed, it was a bit like that. You’d ask him a question and he’d give you an answer that was nothing to do with what you’d just said. So that was weird. But by and large people are actually OK.’

But Lorraine had nothing but kind words to say about several other stars, saying: ‘Oh jeez.. Hugh Jackman is amazing, he’s always exactly the same. And Tom Hanks. They’re as normal as they can be as well as being hugely famous. George Clooney, of course.’ 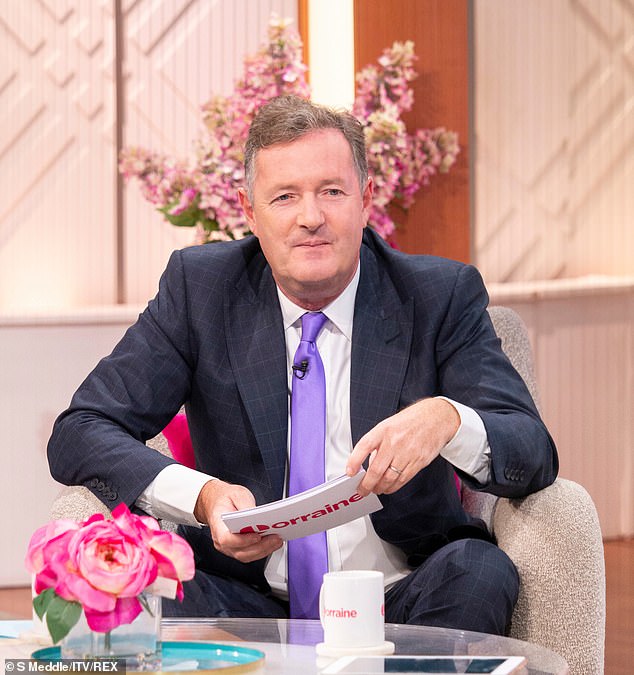 Hard at work: After spending the morning hosting Good Morning Britain, Piers rushed over to Lorraine studio to interview her in the special

Lorraine was then surprised by regular guest Martin Clunes, who appeared live from Dorset to offer his own congratulations.

The show then carried on with a fashion segment inspired by Lorraine’s sense of style, given her now-legendary status as an 80s fashion icon icon.

After a surprise message from her beloved mum and dad, Lorraine was close to tears as she was presented with a cake at the end show, mimicking her sat in her famous armchair alongside her pet dog Angus.

She wrapped up the show by saying: ‘You are only as good as your team and my team are the best team ever. Thank you to them and thank you to all of you who have been watching for 35 years, which is quite remarkable!’

Lorraine airs weekdays at 8:30am on ITV. 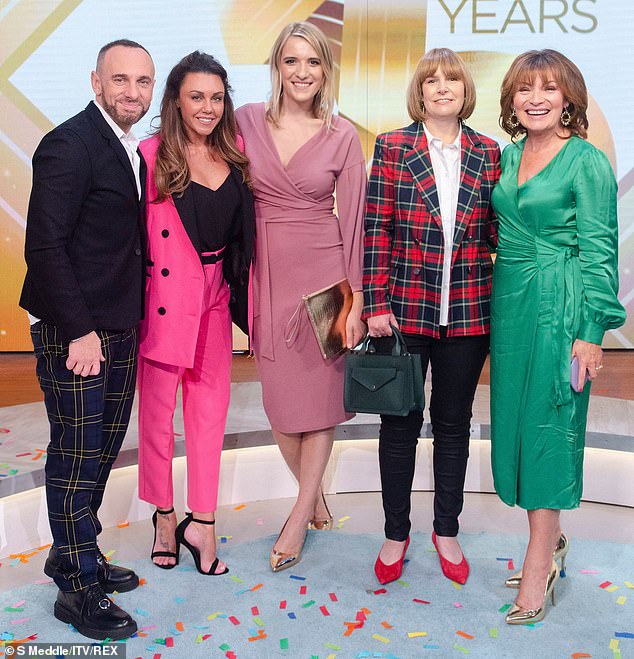 Sweet: The episode also saw a special fashion segment inspired by some of Lorraine’s best looks, and by the end the star was moved to tears by the kind gesture