Lori Loughlin’s daughters had a big say in which direction her case with the college admissions scandal would go.

Olivia Jade, 20, and Bella, 21, both encouraged their mother as well as dad Mossimo Giannulli to plead guilty, according to People.

‘The girls have been very supportive of their parents throughout this whole ordeal,’ a legal source told the site. ‘They were encouraging their parents to fight this, but that’s obviously all changed now. They realize that this was done to help them and there is no animosity there.’ 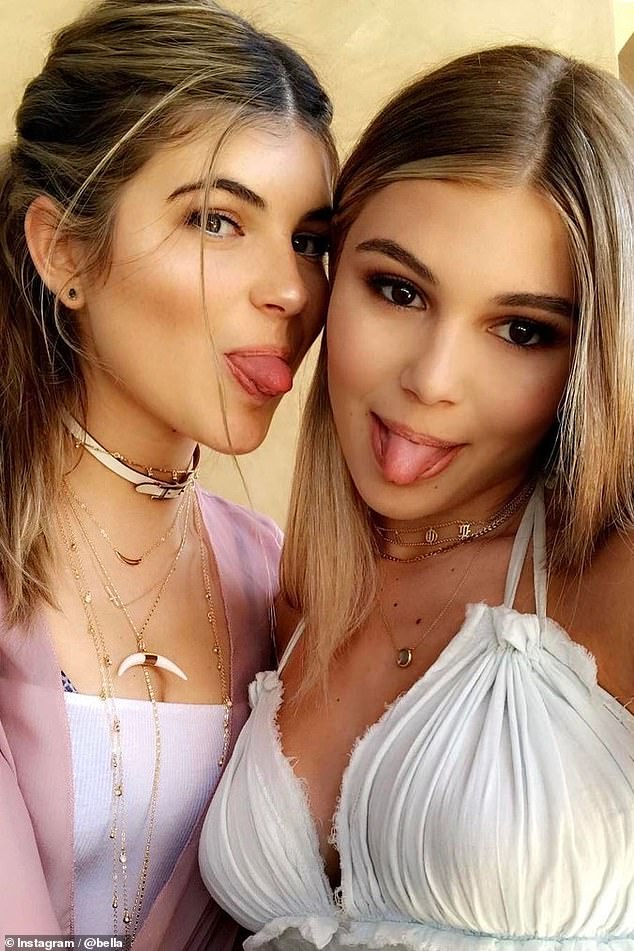 They said do it: Lori Loughlin’s daughters had a big say in which direction her case with the college admissions scandal would go; here the girls are seen side by side before the arrests of their parents in 2019

The girls also wanted less jail time for their parents.

‘The girls’ biggest fear has been that their parents would go to jail for years,’ added a source.

‘They all had a family discussion about their options before making a decision.

‘Olivia and Bella also want it to be over and they agree the plea is the best option.’

It was also said: ‘Lori and Mossimo don’t feel like they gave up; they’re doing what’s best for their family.’ 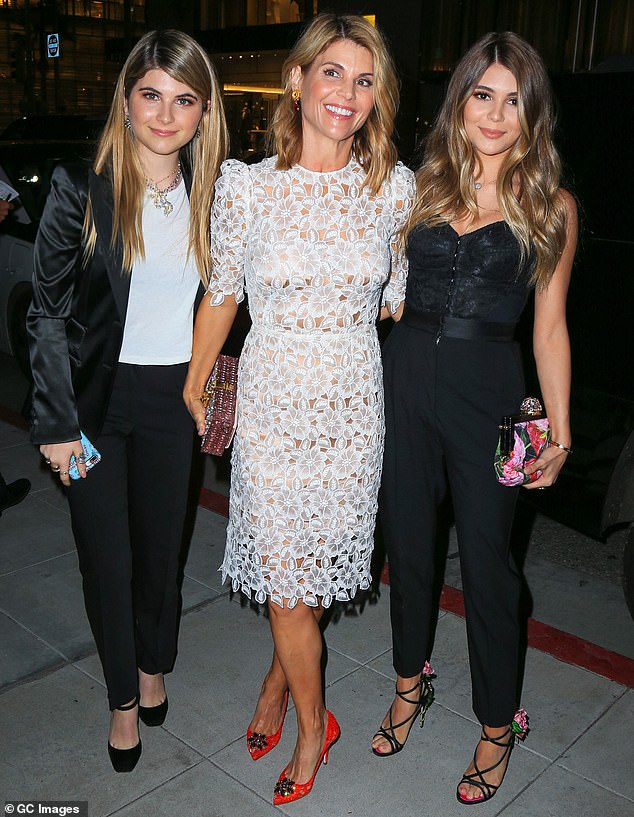 Do the right thing, folks: ‘The girls have been very supportive of their parents throughout this whole ordeal,’ a legal source told the site; seen in 2017

The 55-year-old actress and 56-year-old fashion designer took a guilty plea a week ago. 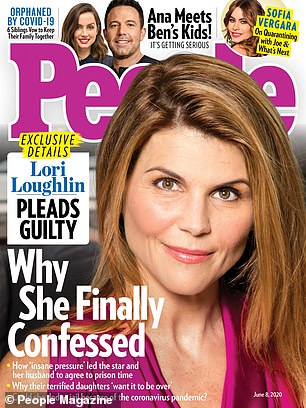 ‘Lori and Mossimo deeply regret what they did,’ added the source about the high profile case where they allegedly bribed their kids’ way into college.

And the couple are not faring too well.

‘This experience has taken a huge emotional and physical toll on both of them,’ said the insider.

Their daughters are ‘terrified,’ a source added,

‘The girls are terrified and want it to be over,’ an insider told the publication about their parents’ prison terms – Lori will likely get two months and Mossimo five.

But they are glad everything is moving along.

‘There’s light at the end of the tunnel,’ said a legal source. ‘They want to serve their sentences, pay their dues and put this behind them.’ 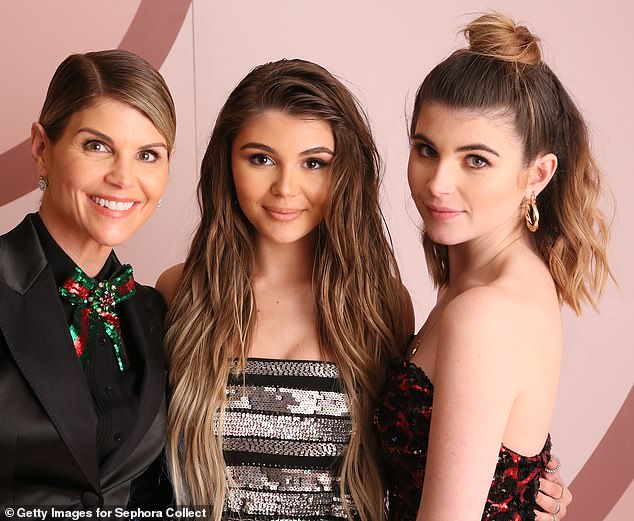 We are here for you mom: ‘They were encouraging their parents to fight this, but that’s obviously all changed now. They realize that this was done to help them and there is no animosity there,’ said a source; seen in December 2018

But they are let down their sentencing date is not until August 21.

‘They’re disappointed,’ a legal source told the site. ‘The whole point of this was to put this behind them, and they wanted the hearing sooner rather than later.’

This comes after a source said the girls think it will be strange visiting the two as they serve months in jail, according to UsWeekly.

‘It will be surreal for Isabella and Olivia to visit them behind bars, but this is a much better outcome than what they envisioned,’ an insider told the site. The family reportedly worried the two could get years instead of months in jail. 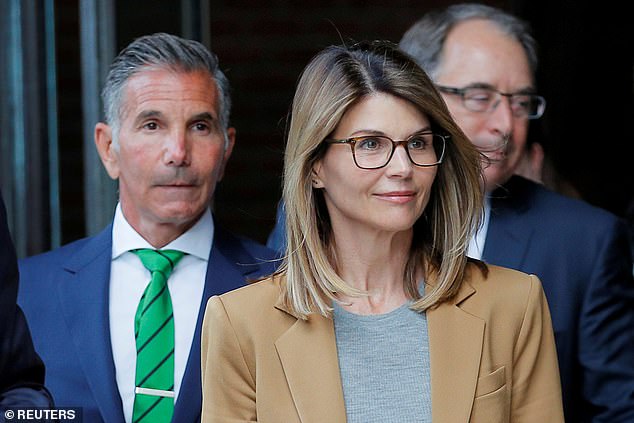 Their folks have been shamed: Loughlin, and her husband, fashion designer Mossimo Giannulli, leave the federal courthouse after facing charges in a nationwide college admissions cheating scheme, in Boston, Massachusetts, in 2019

The girls have said they are ‘proud’ of their mother.

‘As embarrassing and awful as it’s been, Olivia and Isabella still love their mom deeply, and it pains them to see her suffer,’ the source added.

Last week sources at the same site said it has been hard on all the family members.

‘Olivia and Bella were devastated when Lori and Mossimo told them they were pleading guilty,’ a source said. ‘The girls have been spending a lot of time at their parents’ house recently, and they are becoming much more of a tight-knit family.’

Lori and her husband Mossimo pleaded guilty to paying half a million dollars to get their two daughters into the University of Southern California (USC) as part of a college admissions bribery scheme.

They appeared on separate screens during their video hearing, showing no emotion as the prosecutor detailed their crimes and making no comments other than to answer questions from US District Judge Nathaniel Gorton.

He has not decided whether he will accept the deals they made with prosecutors.

Under their proposed deals, Loughlin, 55, hopes to spend two months in prison and Giannulli, 56, is seeking to serve five months.

But the judge said he will decide whether to accept the deals after considering the pre-sentencing report, a document that contains background on defendants and helps guide sentencing decisions. 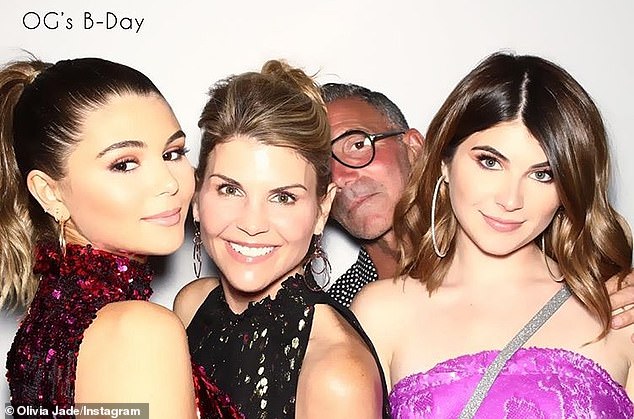 They had it all: Lori, Mossimo, Olivia Jade and Bella in a photo booth

Judge Gorton did not say when he would decide but scheduled their sentencing hearings for August 21.

Loughlin and Giannulli were among dozens of wealthy parents, athletic coaches and others charged last year in the bribery scheme. The parents paid hefty bribes to get their kids into top universities with bogus test scores or fake athletic credentials, authorities said.

The couple had been scheduled to go to trial in October on charges that they got their two daughters into USC as crew recruits, even though neither girl was a rower.

Prosecutors say they funneled money through a sham charity operated by college admissions consultant Rick Singer, who has pleaded guilty to orchestrating the scheme.

Prosecutors recorded phone calls and e-mails showing the couple worked with Singer to get their daughters into USC with fake athletic profiles depicting them as star rowers.

In one e-mail, Singer told Loughlin and Giannulli he needed a picture of their older daughter on a rowing machine in workout clothes ‘like a real athlete’.

Giannulli responded, according to the court filings: ‘Fantastic. Will get all’ and sent Singer the photo. 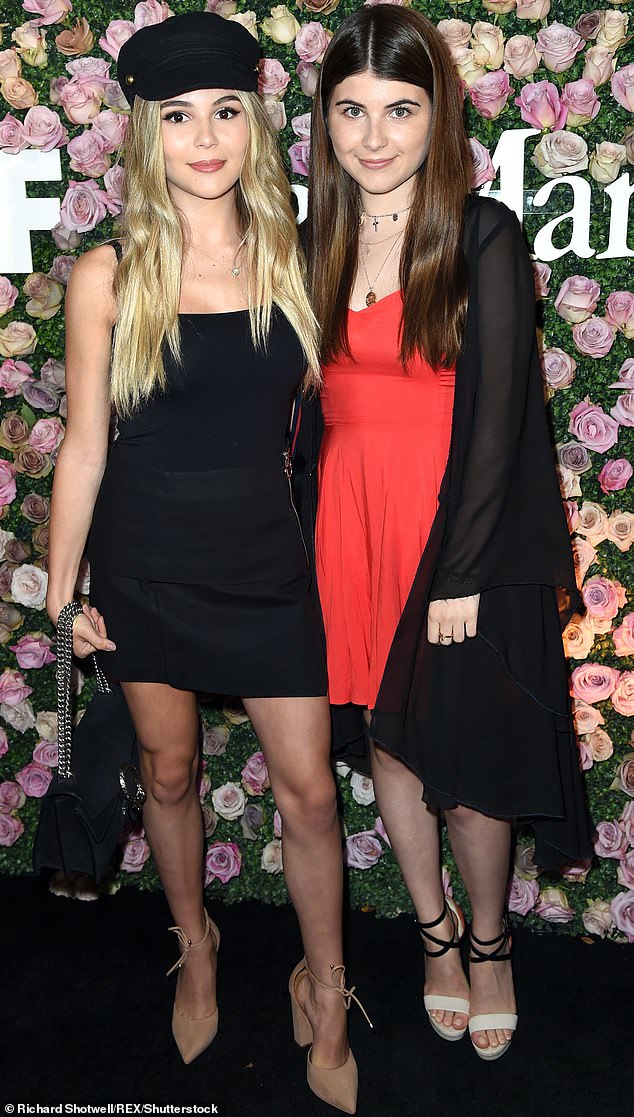 Party time: Olivia Jade and Bella are seen arm in arm in June 2017

Prosecutors also had a bogus resume presented to USC that falsely claimed their younger daughter, social media star Olivia Jade, rowed in prestigious competitions like the Head of the Charles.

Singer and the former coach he paid to create Jade’s fake athletic profile are cooperating with investigators and were expected to testify against the couple at trial. 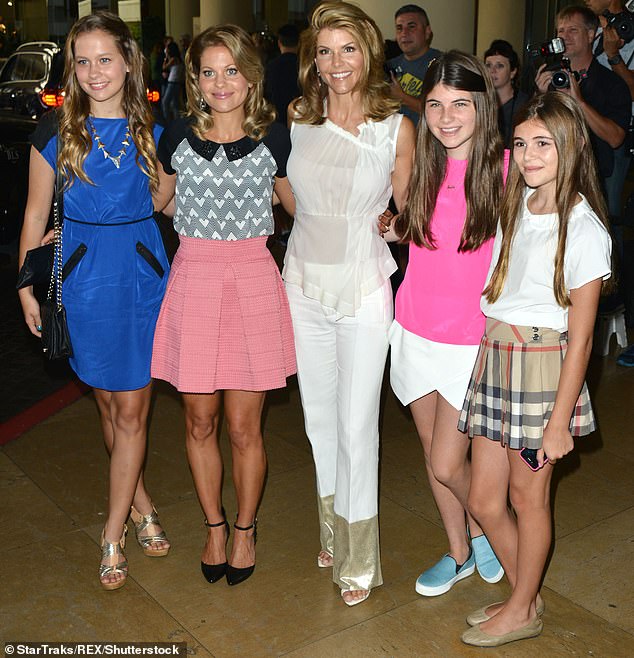 At an event: Loughlin with daughters Bella and Olivia Jade and Candace Cameron-Bure at the Hallmark Channel and Hallmark Movie Channel Summer TCA Press Tour in 2013

Giannulli pleaded guilty to conspiracy to commit wire and mail fraud and honest services wire and mail fraud. Prosecutors agreed to dismiss charges of money laundering and federal programmes bribery that were added after the case was filed.

Loughlin and Giannulli insisted for over a year that they were innocent and that they believed their payments were legitimate donations to the school or Singer’s charity.

They accused prosecutors of withholding evidence that would exonerate them and claimed investigators had sought to trick parents into incriminating themselves. The judge this month rejected the defense’s bid to dismiss the case over allegations of misconduct by federal agents.

They are the 23rd and 24th parents to plead guilty in the case. An attorney for the couple declined to comment this week.