Lewis Hamilton was seen enjoying an array of water sports while aboard a luxury yacht on Wednesday.

The F1 champion, 36, was seen speeding around the ocean in Saint-Jean-Cap-Ferrat, France, on a jet ski during an outing with members of his team, among them Toto Wolff, Angela Cullen and business manager Penni Thow.

Fellow racer Nico Rosberg, who was on a boat anchored nearby with his family, later passed by to say hello to his teammate. 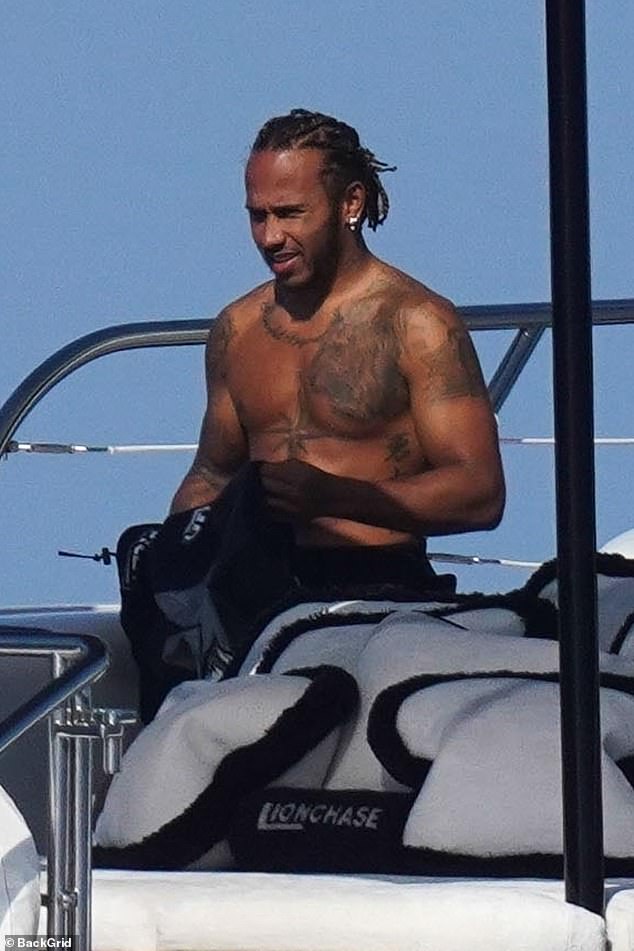 Fun in the sun: Shirtless Lewis Hamilton shows off his muscular figure before larking around on a jet ski and flyboard while out on Wednesday

Showing off his need for speed, Lewis caught the waves in the water craft and also tried out a flyboard during his day off from the track.

He displayed his hunky torso while wearing a black life jacket that he donned over his toned frame.

The sportsman completed his look by wearing black wetsuit leggings, and he pulled his brunet braids into a ponytail.

Lewis appeared to be in good spirits as he tried out the various water sports, before Nico took his daughter Alaϊa, five, and Naila, four, on a jet ski from his neighboring boat.

The German-Finnish racing driver opted for a casual ensemble for the outing as he wore a black shirt with matching swimming trunks. 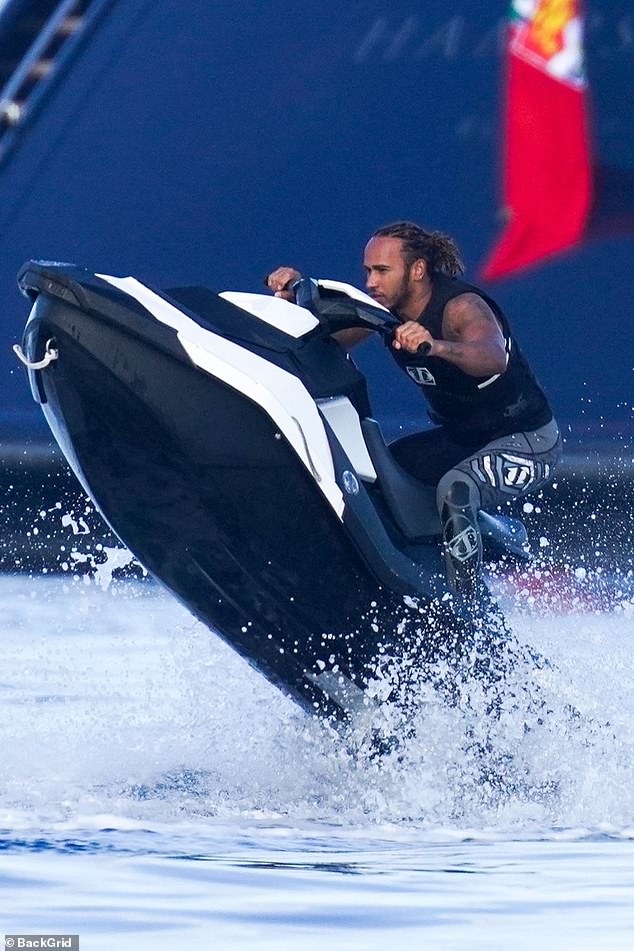 Need for speed: The F1 champion, 36, was seen speeding around the ocean in Saint-Jean-Cap-Ferrat, France, on a jet ski 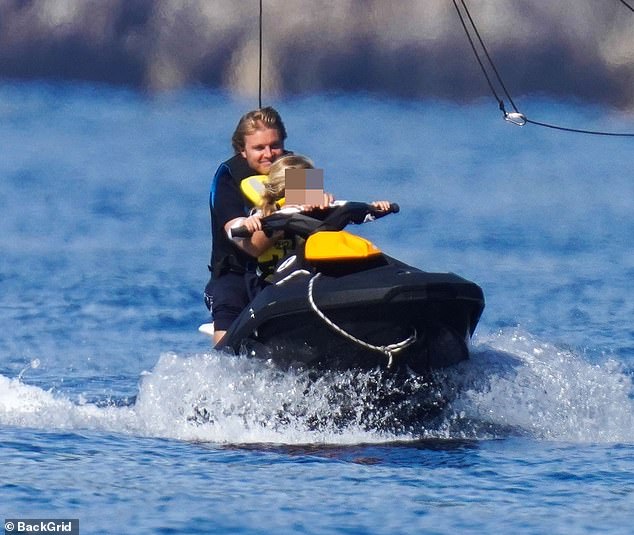 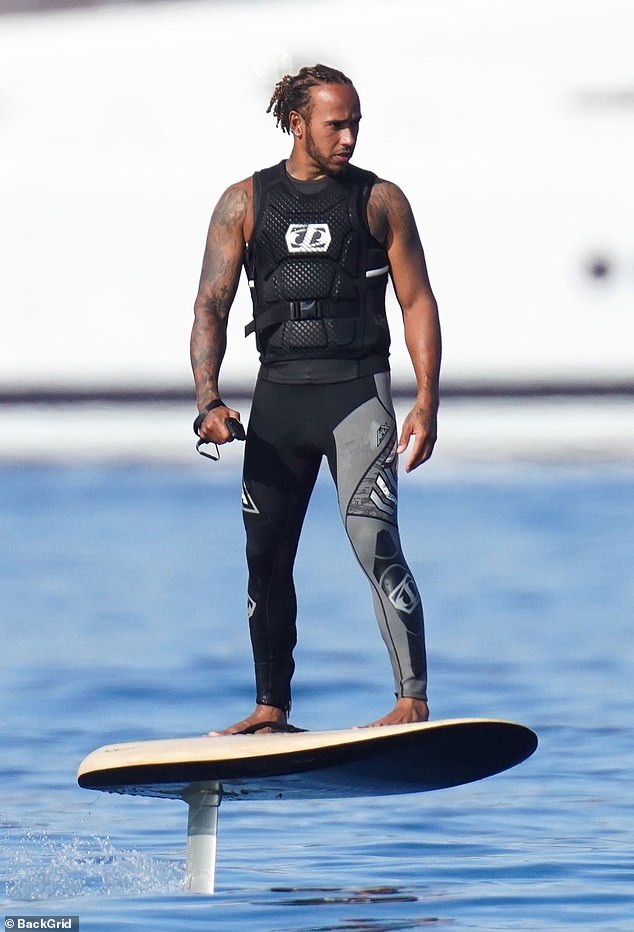 Sporty: Lewis sped around on a jet ski and tried out a flyboard while enjoying a break 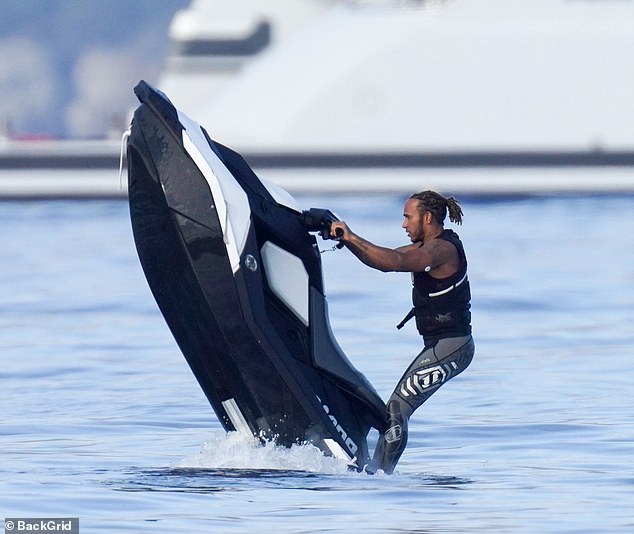 Going for it: Showing off his need for speed, Lewis caught the waves in the water craft 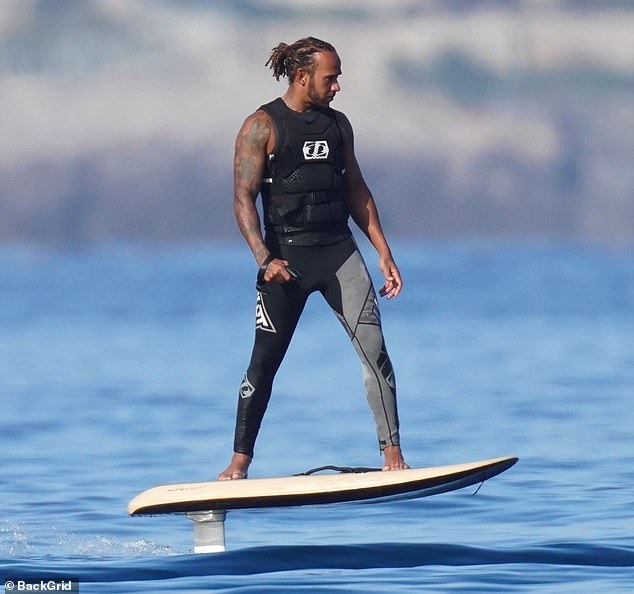 Having fun: Lewis also tried out a flyboard during his day off from the track

Hamilton finished Monaco Grand Prix in seventh with Max Verstappen taking the championship lead from him after the Dutchman dominated from start to finish to win.

Following the race, Hamilton rued Mercedes’ pit-stop strategy but vowed he and his team will do everything they can behind the scenes to bounce back.

An early pit stop backfired for Hamilton and Mercedes, losing them track position on a street circuit where overtaking is incredibly difficult. 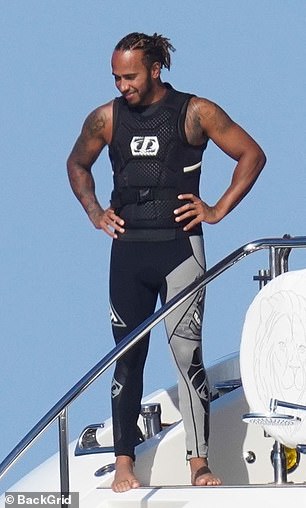 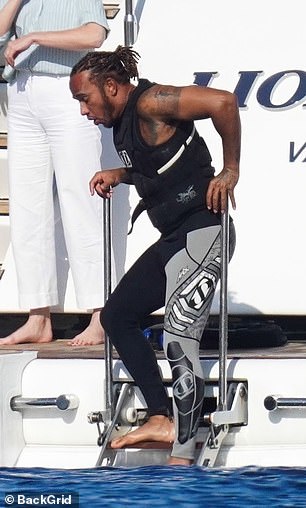 Ensemble: Lewis showed off his hunky torso while wearing a black life jacket that he donned over his toned frame 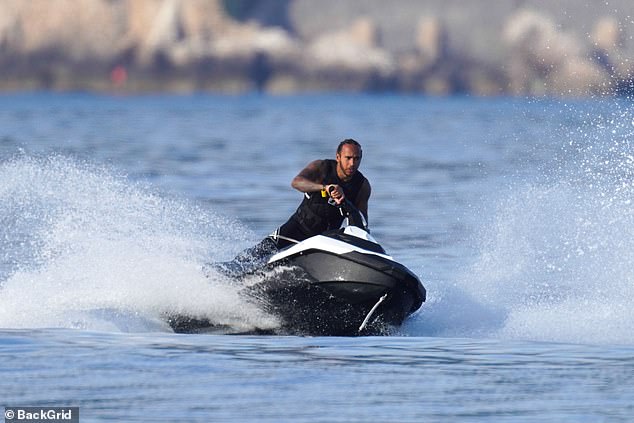 Enjoying himself: Lewis was at ease while speeding across the water 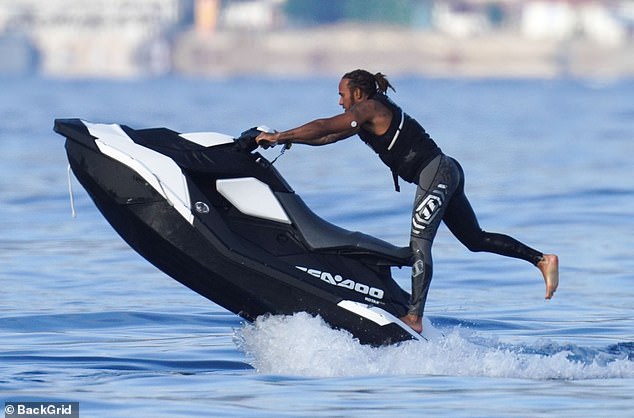 Going for it: Lewis appeared to be in good spirits as he tried out the various water sports 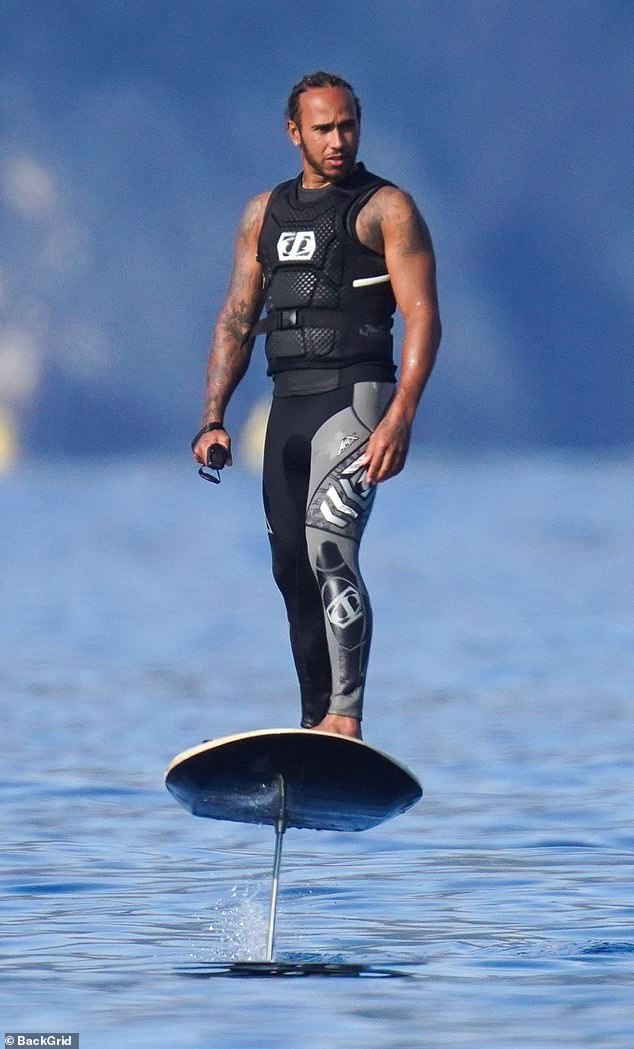 Cool: Lewis was seen lifted into the air on the fly board 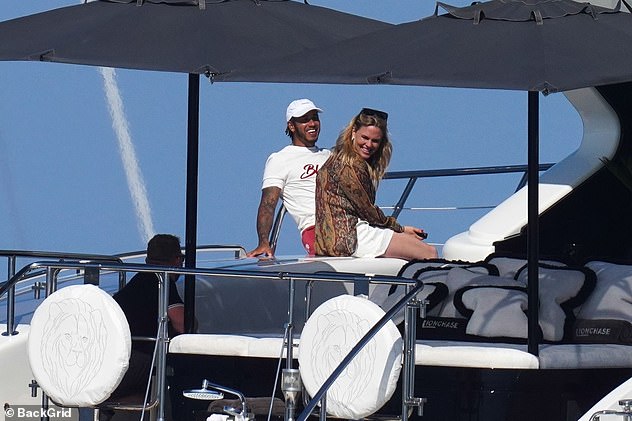 ‘Three places it cost me,’ Hamilton told Sky Sports F1. ‘I don’t really have a reaction to it, I think we do all our talking in the background and we’ll work together and try to come out of this stronger.

‘We underperformed as a team all weekend, from the get go, so we’ll just put our focus on the next race. Congratulations to Max and his team, they did a great job.’

The next race takes place on June 6 in Azerbaijan around the Baku Street Circuit, a stop on the F1 calendar that missed out last year due to the coronavirus pandemic.

Lewis’ appearance also comes after he teased a potential clothing line as he donned a personalised tee with a picture of himself as a baby on and wrote: ‘Coming soon’ on Twitter. 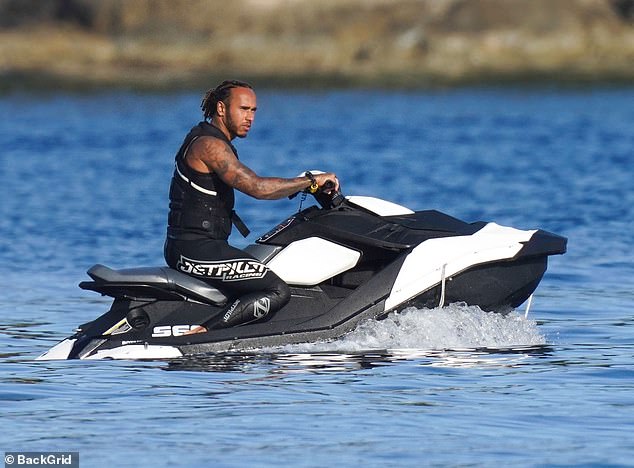 Great day out: Lewis soaked up the sun while trying out the jet ski 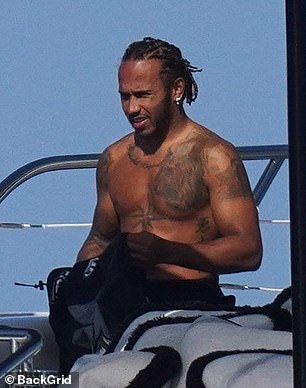 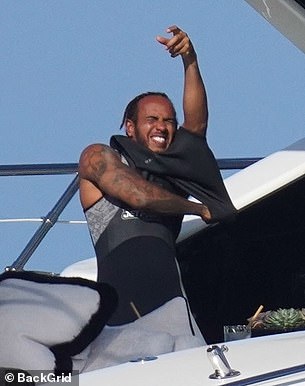 Changing it up: Lewis was seen donning his life jacket and wetsuit 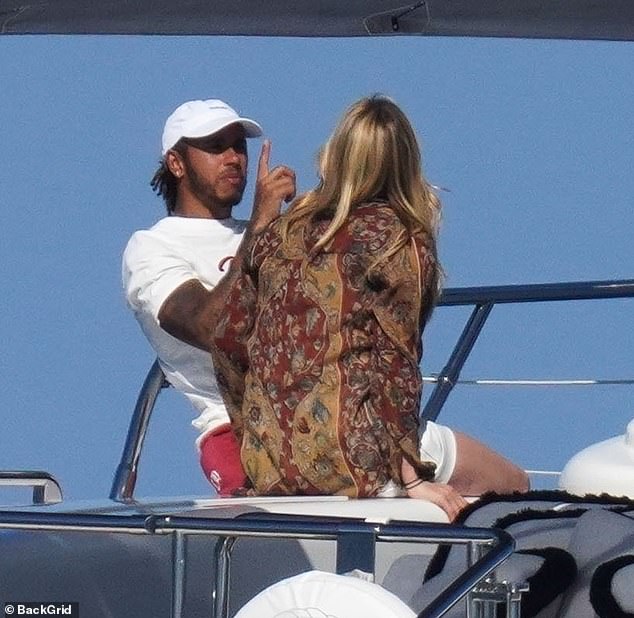 Chatting away: Lewis put on an animated display while talking with Penni 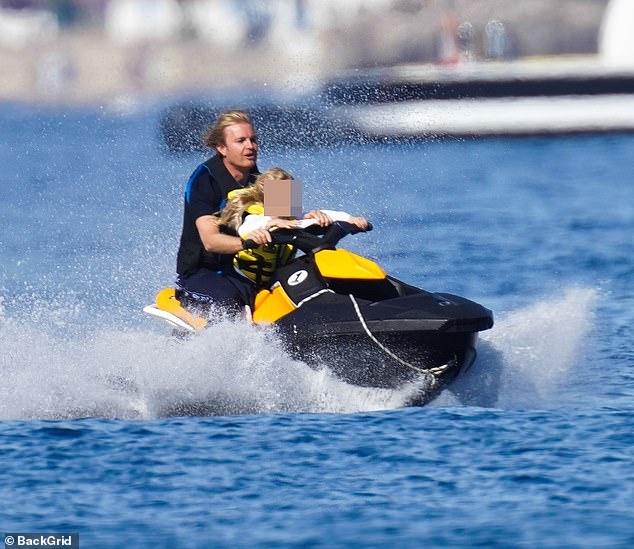 Doting dad: Nico, meanwhile, had his arms wrapped around his daughter to protect her as they tried out the jet ski

The driver looked typically stylish as he was spotted wearing the purple printed T-shirt in Bahrain.

And he made sure to shine a spotlight on the clothing item at the start of April as he revealed the adorable original photo to social media.

The throwback image was transformed into an electric purple graphic on the star’s slim-fitted tee, with the word ‘Loyalty’ inked up above.

After sharing the snaps on social media,  fans were quick to quiz Lewis on whether he’s launching a clothing line or possibly having children 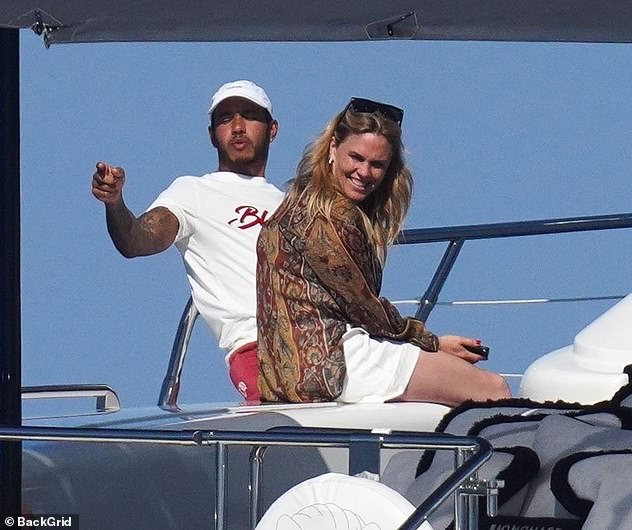 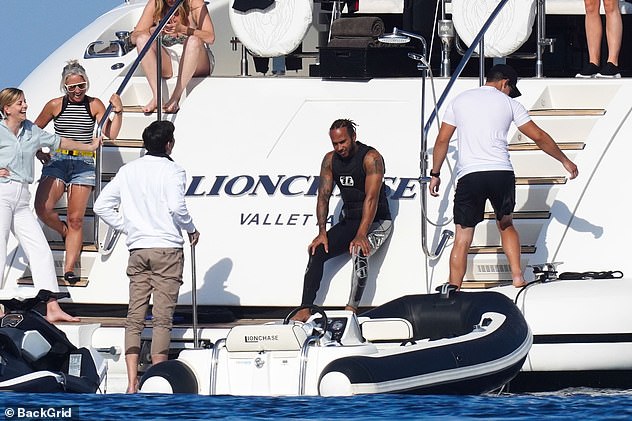 Pals: Lewis was seen on the yacht with colleagues from his team including Toto Wolff and Angela Cullen 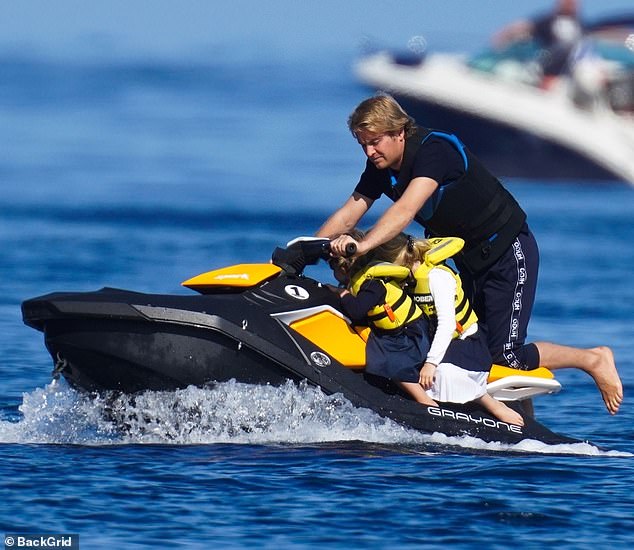 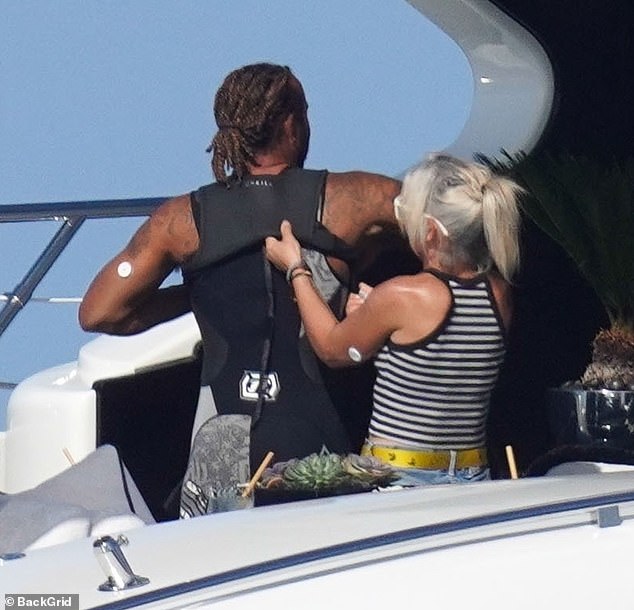 Assistance: Lewis was helped into his life jacket, which appeared to get caught on his wet suit