He’s had a three-week break since winning the first race of the season in Bahrain.

And Lewis Hamilton was all business as he strolled around the Circuit Enzo e Dino Ferrari ahead of Sunday’s Emilia Romagna Grand Prix in Imola, Italy, on Thursday.

The seven-time world champion, 36, looked every inch the F1 star as he embodied racing spirit in a chequered flag inspired set by Jacquemus, costing a cool £922. 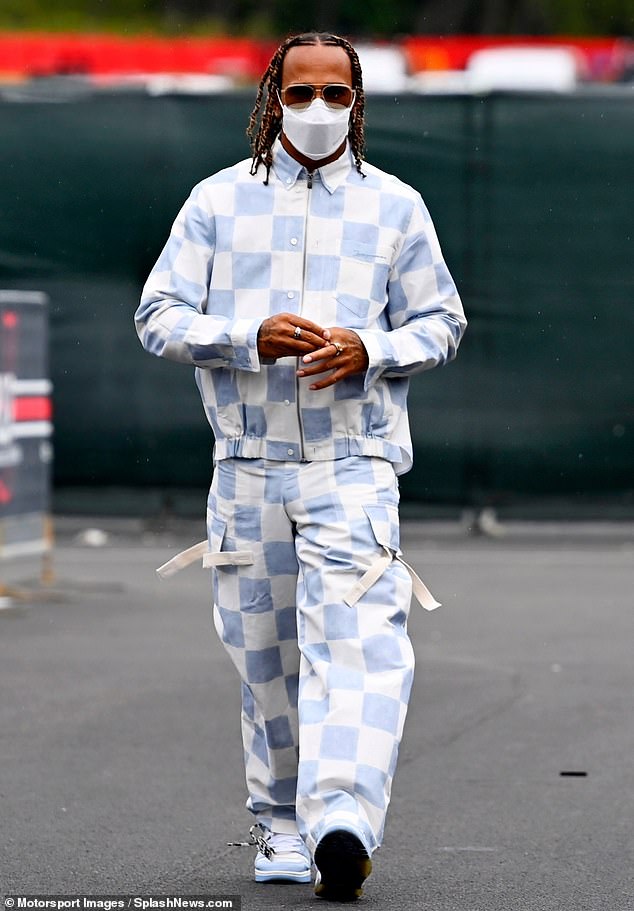 Getting in the zone: Lewis Hamilton was all business as he strolled around the Circuit Enzo e Dino Ferrari ahead of Sunday’s Emilia Romagna Grand Prix in Imola, Italy, on Thursday

Lewis caught the eye in his striking ensemble, which boasted £502 wide-leg trousers with large pockets on the side.

His matching £420 collared jacket also featured the same eye-catching print as well as both buttons and a zip fastening down the front.

Keeping things comfortable, Lewis donned a pair of complementary white and blue trainers for the walk at the track with his trainer Angela Cullen.

The professional driver completed his pre-race weekend look with some stylish sun-glasses and a white face mask. 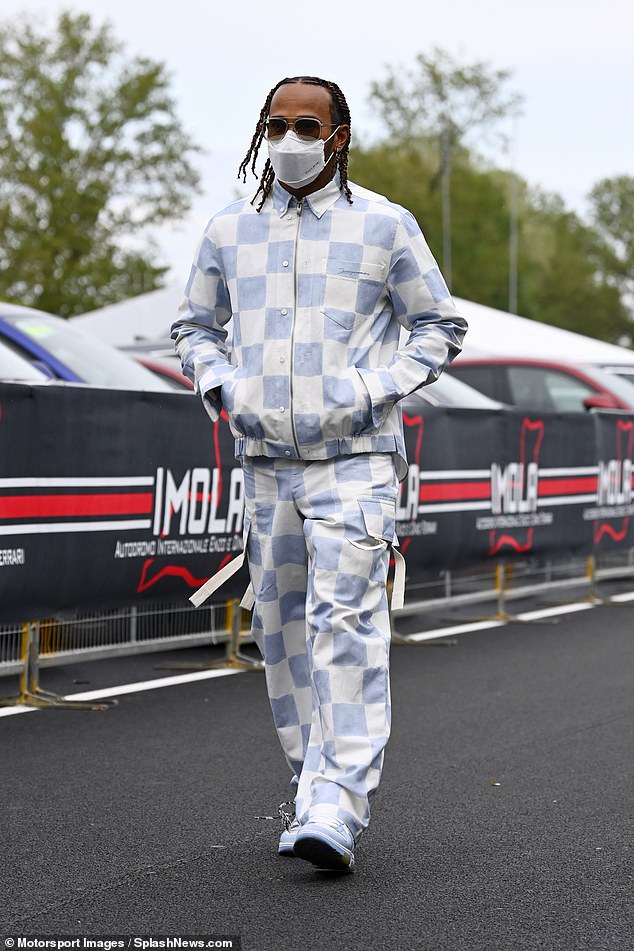 Arriving: The F1 champion, 36, looked every inch the professional as he embodied racing spirit in a chequered flag inspired £922 jacket and trousers set by designer Jacquemus

The upcoming racing weekend has seen its schedule rearranged slightly to avoid an overlap with the start of Prince Philip’s funeral.

Qualifying on Saturday has now been moved forward by an hour, now running from 1 to 2pm, to avoid overlapping with the start of the Duke of Edinburgh’s funeral.

Seven of the 10 teams are based in the UK and F1 wished to avoid any possible embarrassment of Sir Lewis, who was awarded a knighthood in December’s honours list, and his fellow drivers fighting for pole as the funeral begins in Windsor. 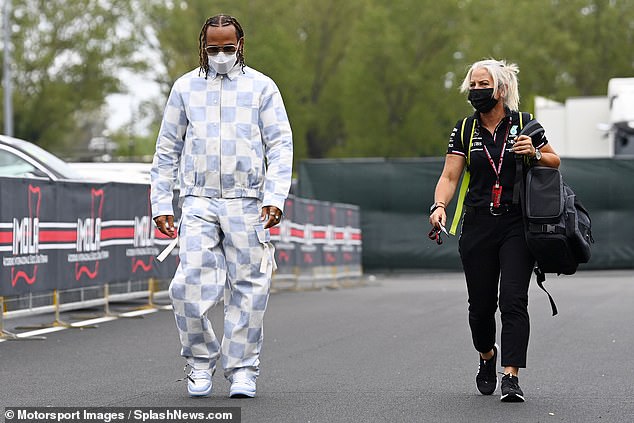 Talking tactics? Lewis donned a pair of white and blue trainers as well as a face mask for the walk at the track with his trainer Angela Cullen

The Duke, who served as president-in-chief of the British Racing Drivers’ Club for 42 years, will be honoured with a minute’s silence prior to qualifying.

Friday’s times have also been changed in accordance with rules requiring final practice to start no less than 19 hours after the end of second practice.

The funeral at Windsor Castle starts with a national minute’s silence at 3pm BST.

Lewis’ appearance also comes after he teased a potential clothing line as he donned a personalised tee with a picture of himself as a baby on and wrote: ‘Coming soon’ on Twitter. 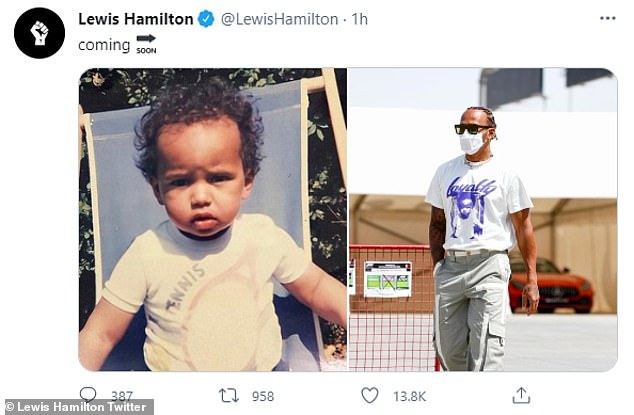 ‘Coming soon’: Lewis recently hinted he’s launching a clothing line when he revealed the T-shirt he wore at the Grand Prix in Bahrain featured a picture of HIMSELF as a toddler

The driver looked typically stylish as he was spotted wearing the purple printed T-shirt in Bahrain.

And he made sure to shine a spotlight on the clothing item at the start of April as he revealed the adorable original photo to social media.

The throwback image was transformed into an electric purple graphic on the star’s slim-fitted tee, with the word ‘Loyalty’ inked up above.

After sharing the snaps on social media,  fans were quick to quiz Lewis on whether he’s launching a clothing line or possibly having children 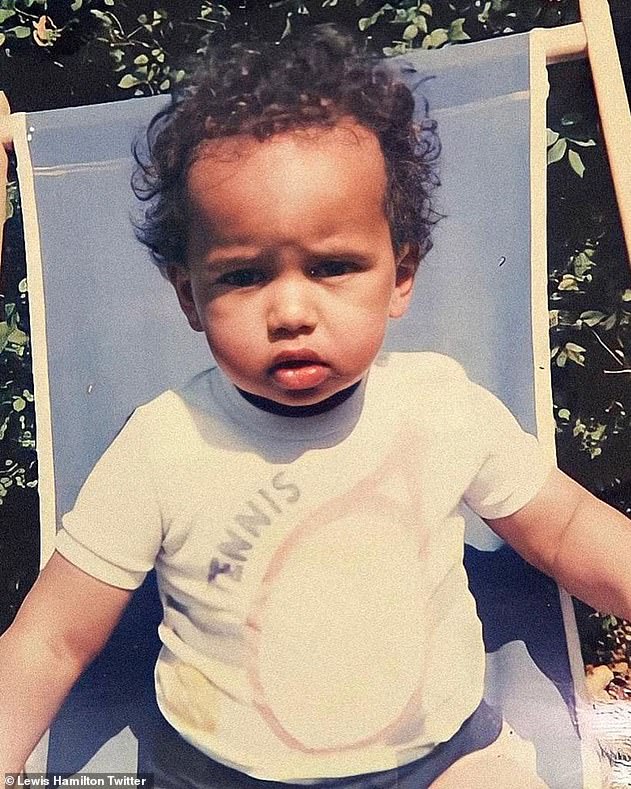 Throwback! Lewis also made sure to shine a spotlight on the clothing item as he revealed the adorable original photo as a toddler to social media

‘You’re having a baby?’ Eager fans quizzed Lewis as to whether he’s launching a clothing line or possibly having children