EXCLUSIVE: Bikini-clad Larsa Pippen, 48, and shirtless Marcus Jordan, 31, get VERY cozy together in Miami… despite RHOM star insisting they are just ‘friends’ amid swirling dating rumors

Despite her recently insisting they are just ‘friends’, Larsa Pippen and Marcus Jordan put on a very cuddly display as they hit the beach together in Miami amid months of dating rumors.

Scottie Pippen’s ex-wife and Michael Jordan’s son continued to raise eyebrows as they strolled across the beach with their arms wrapped around each other on Sunday.

It’s no wonder Marcus, 31, could hardly keep his hands off Larsa, 48, with the reality star clad in a skimpy black bikini that left little of her envious body to the imagination. 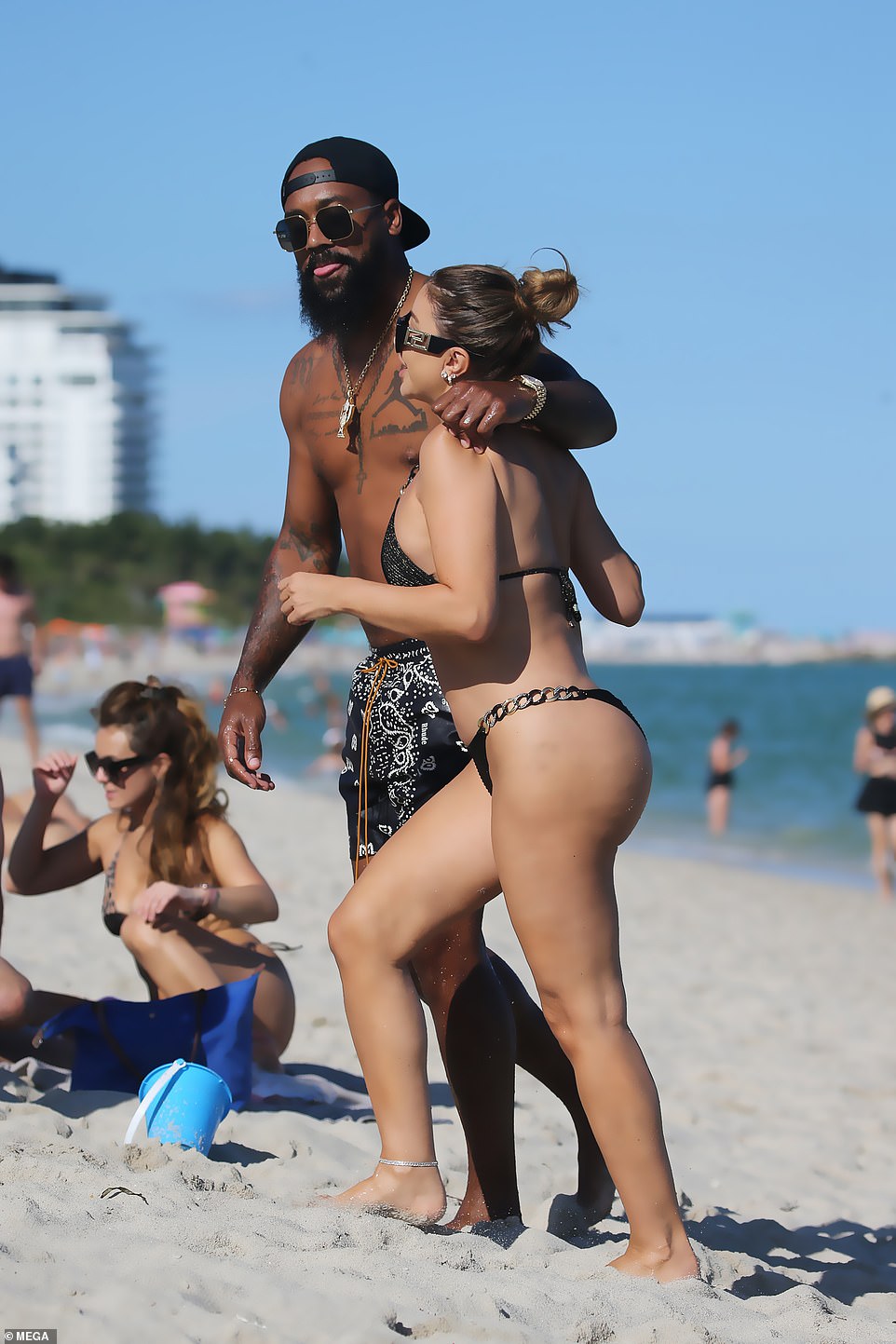 Raising eyebrows! Larsa Pippen and Marcus Jordan continued fueling romance rumors as they hit the beach in Miami together on Sunday

The Real Housewives Of Miami star wowed in a sexy black swimsuit with her hair pulled up into a neat bun and stylish sunnies protecting her eyesight.

She looked every inch the beach babe as she frolicked on the coast with her hunky man by her side.

Marcus displayed his muscles in a black and white print pair of trunks, cap worn backwards, and frames over his eyes. He accessorized the look with a dazzling chain necklace and eye-catching gold watch.

The duo looked smitten with one another as Marcus wrapped an arm around Larsa’s shoulders and her hands lingering across his back.

Loved-up: The duo strolled across the beach with their arms wrapped around each other on Sunday 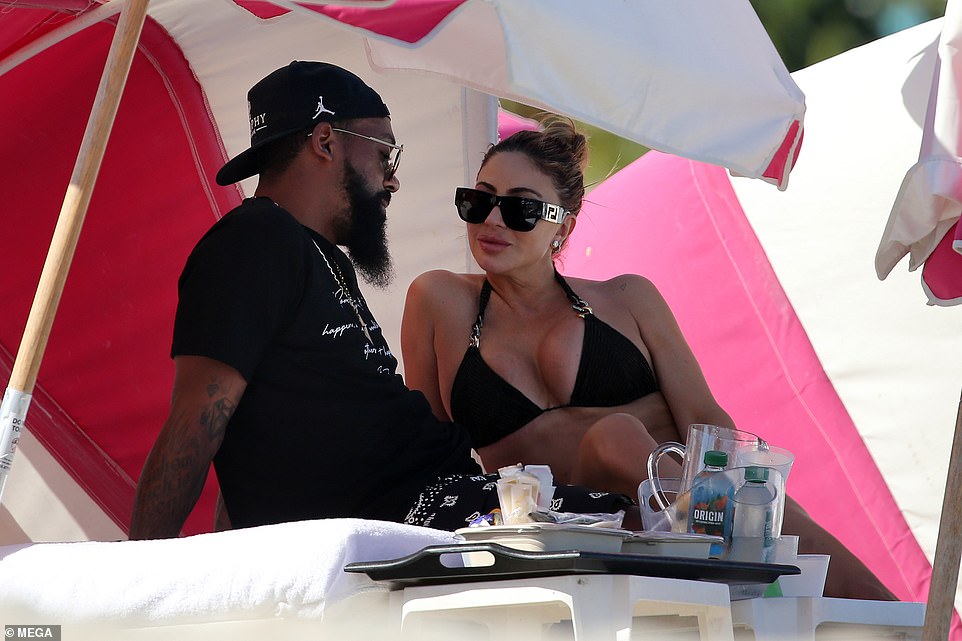 All about you: Larsa cast a gaze at her friend as they lounged beneath an umbrella

As they enjoyed their time with each other in a more intimate setting, the duo shared snuggles as they kicked back on a lounge chair shaded by an umbrella.

Jordan appeared to be giving her bare shoulder a kiss as she laid out beside him.

‘We’re friends,’ she told People at BravoCon. ‘We’ve been friends for a few years and that’s really what it is. We’re friends.’ 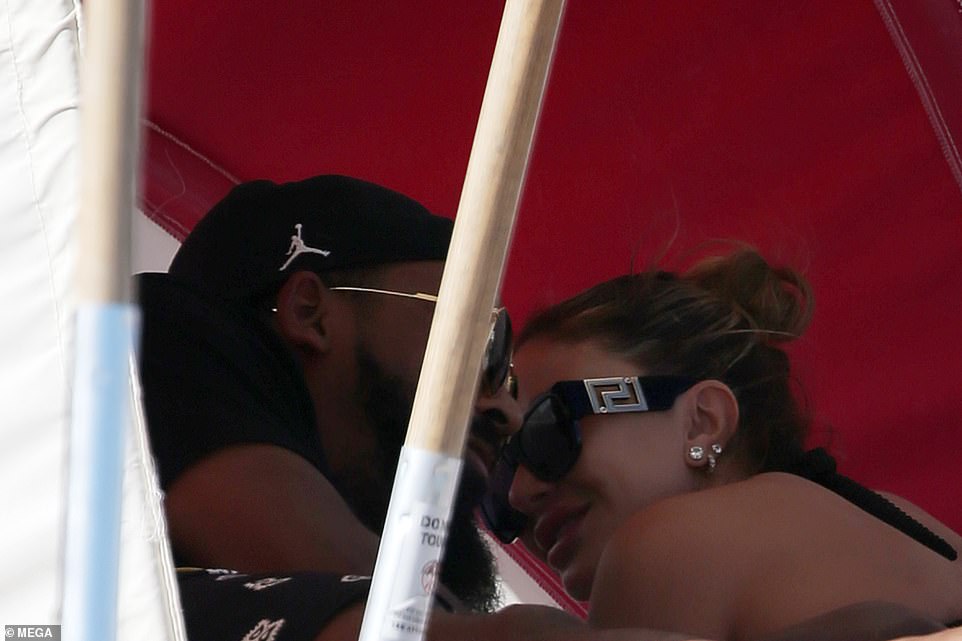 Snuggly: The duo put on a very cozy display 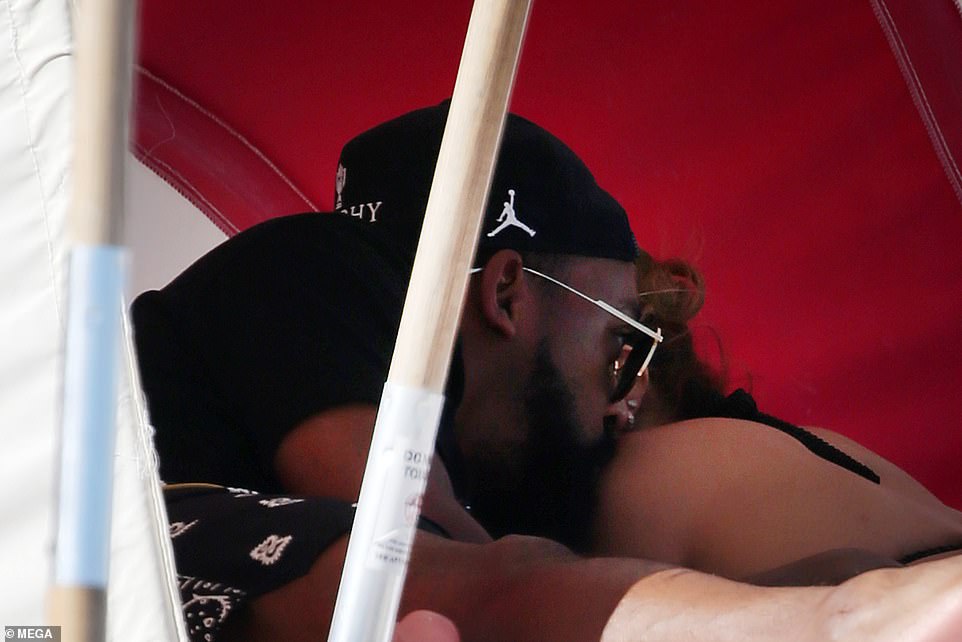 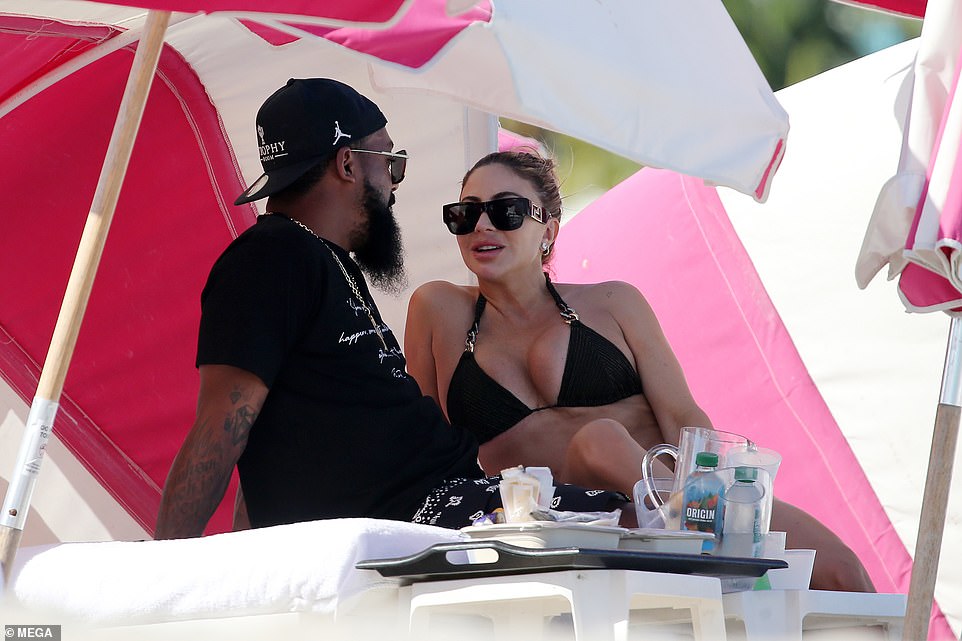 Just friends: ‘We’re friends,’ she told People at BravoCon. ‘We’ve been friends for a few years and that’s really what it is. We’re friends.’

At that same event, Larsa told DailyMail.com she was ‘dating around’ but not in a ‘set situation.’

‘I’m not really in a set situation but I’m definitely dating.’

Larsa and Marcus’ alleged romance has been making headlines since September, when they were spotted out to lunch in Miami with friends followed by an appearance at the music festival Rolling Loud, where they put on a cuddly display in the crowd. 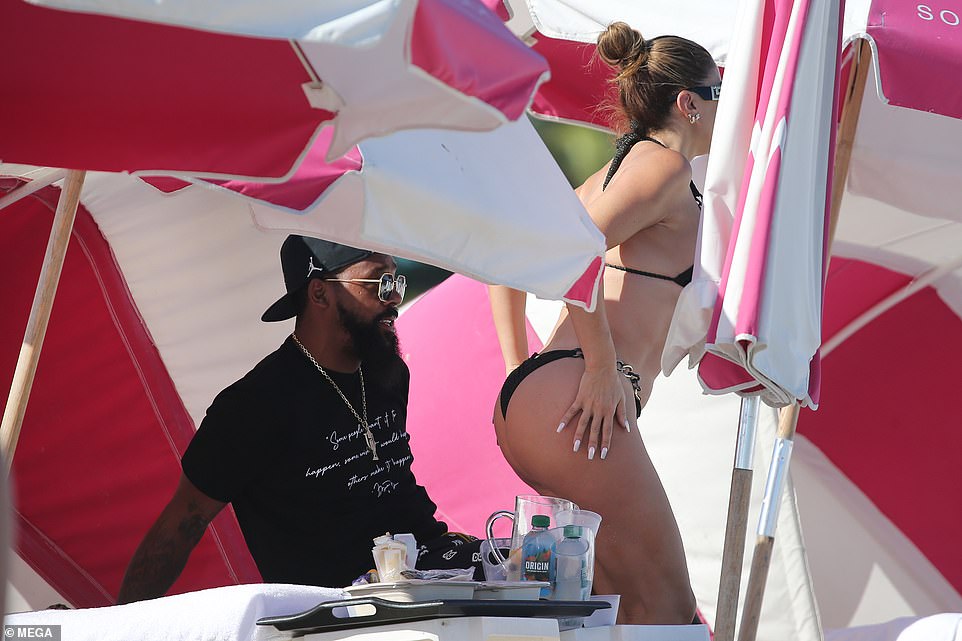 PDA: This comes nearly a month after Larsa insisted she and Marcus were just ‘friends’ 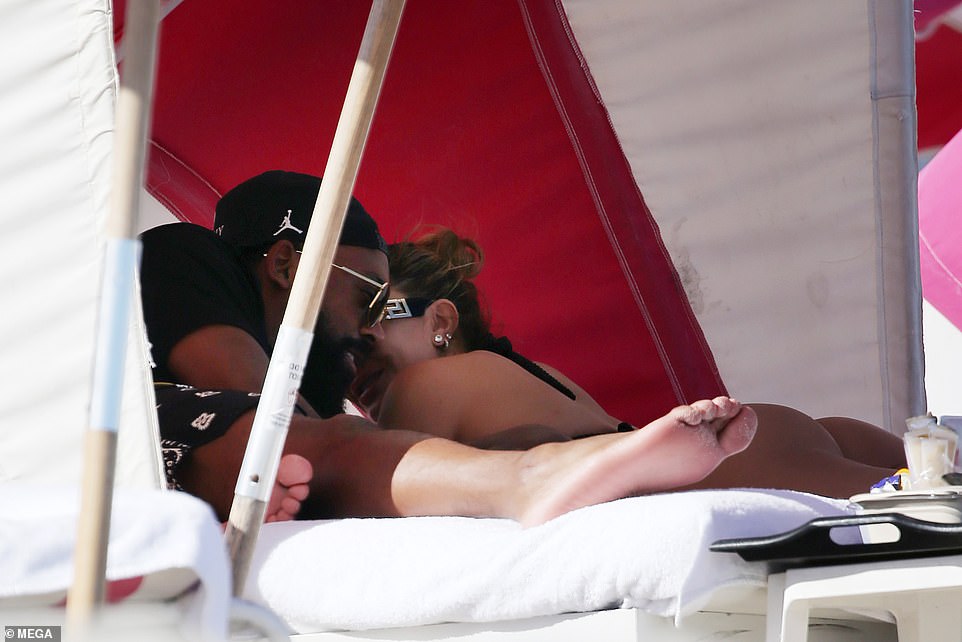 Just friends? The duo got close as they hung out on their lounge chairs

While it had been reported in September that the duo were just friends after they were spotted hanging out together in Miami, Us Weekly also claimed they were indeed dating.

The duo were spotted getting cozy at Catch Steak in NYC, the site reported in September.

An onlooker told the publication: ‘They are definitely an item. As the night progressed it was obvious to everyone in the restaurant that she was really into him.’

Sun-kissed! The beauty topped up her radiant tan as she lingered on the sand

What’s going on? While it had been reported in September that the duo were just friends after they were spotted hanging out together in Miami, Us Weekly also claimed they were indeed dating

The source continued, ‘She was hugging and kissing him, and she was practically sitting on his lap by the end of the dinner. It became a bit of a spectacle to onlookers as it was quite distracting.’

Another insider claimed that the pair ‘are dating and have been spending more time together in recent weeks.’

But in the midst of their alleged romance the two have been trying to keep a low profile on account of the rift between Marcus’ father Michael Jordan and Larsa’s ex-husband Scottie Pippen.

‘They are trying to keep it on the down low because of the rift between Scottie and Michael,’ the person said. 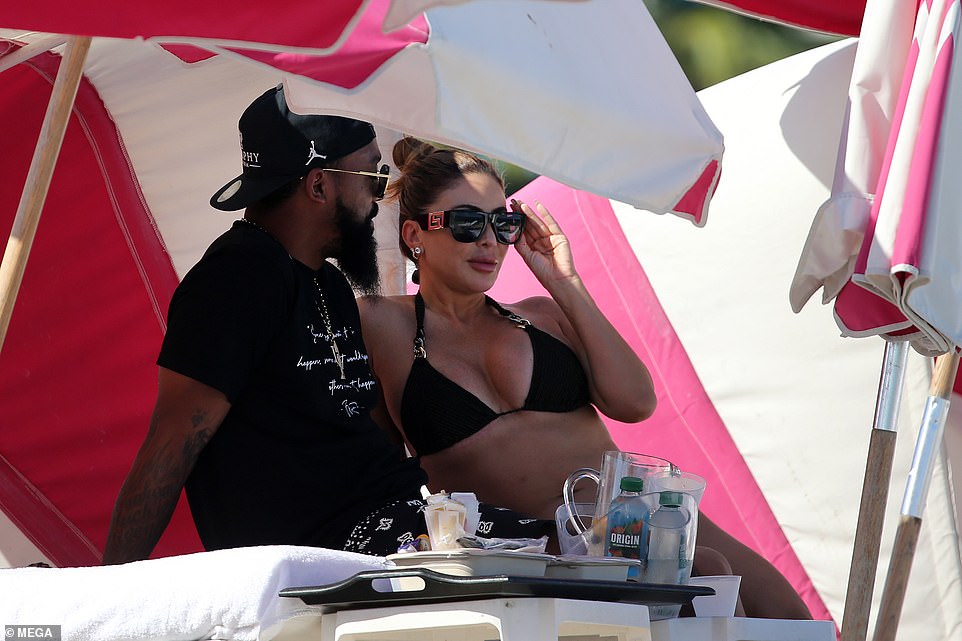 Just the two of us: The duo shared an umbrella as they relaxed by the ocean

So much for being discreet: But in the midst of their alleged romance the two have been trying to keep a low profile on account of the rift between Marcus’ father Michael Jordan and Larsa’s ex-husband Scottie Pippen

Marcus is Michael’s second oldest son. He played college basketball at the University of Central Florida but did not turn pro after graduating in 2013 with a degree in hospitality management.

Larsa was married to Basketball Hall of Famer Scottie Pippen from 1997 to 2021, though both had filed for divorce years earlier.

Michael and Scottie were the 1 to 2 punch on what many consider the greatest basketball team in the history of the sport, the six-time champion Chicago Bulls, who won three consecutive titles on two occasions in the 1990s.

The pair played together from 1987 to 1998, not counting Jordan’s brief retirement to play minor league baseball.

While they were a dynamic duo on the court, the ESPN documentary The Last Dance showed tensions between them. 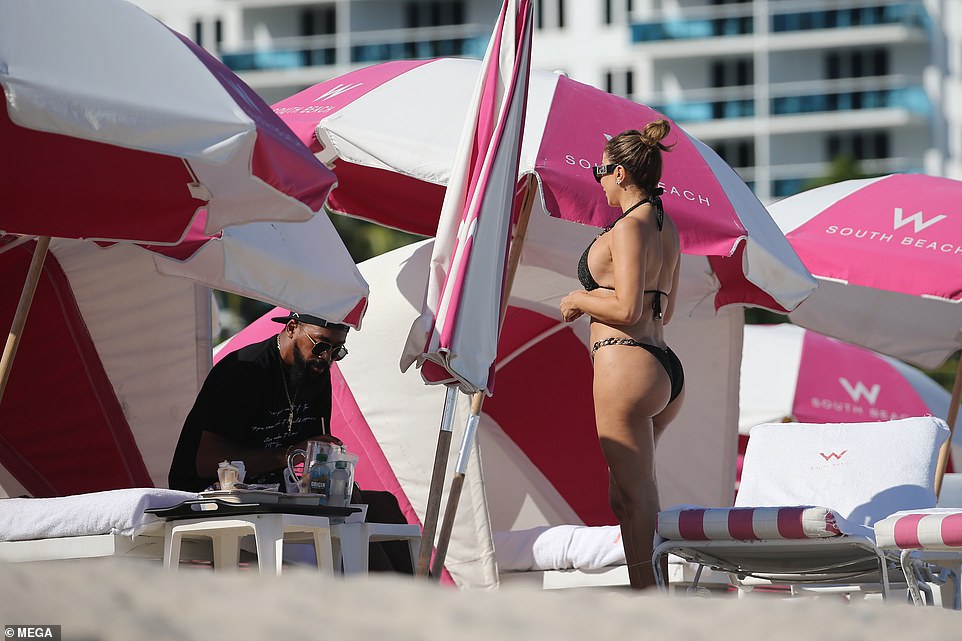 Fun in the sun: The 48-year-old chatted with her beau from a slight distance