Lady Gaga gushes over House Of Gucci co-star Adam Driver and says she’s ‘lucky’ to have acted alongside him in sweet 38th birthday tribute: ‘You’re a weirdo like me’

It appears Lady Gaga and Adam Driver hit it off while shooting the much-anticipated film House of Gucci.

The Born Like This star heaped on the compliments when she posted a tribute to Driver on Friday, in honor of his 38th birthday.

‘Me and my buddy Adam Driver. Happy Birthday to someone I feel so proud to know,’ the A Star Is Born actress, 35, gushed alongside a photo of the duo shooting a scene at a masquerade ball.

‘This is us behind the scenes filming ‘House of Gucci.’ 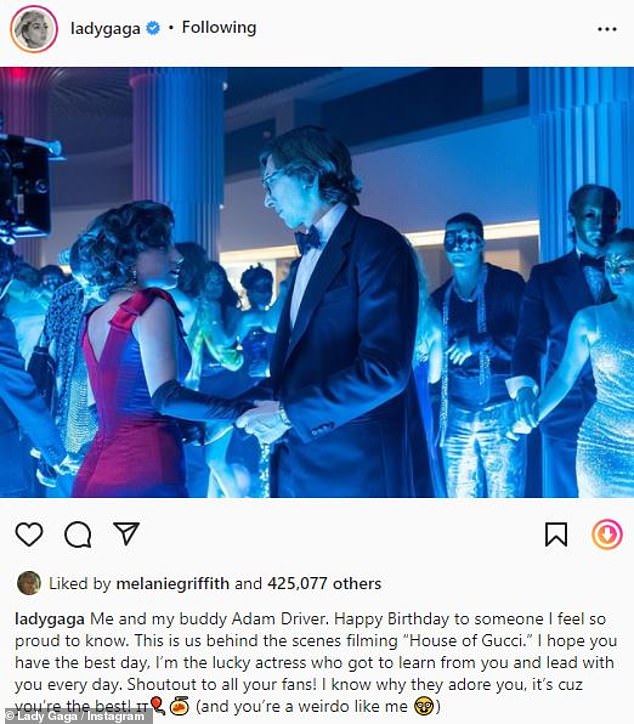 Crushing: Lady Gaga gushed over House Of Gucci co-star Adam Driver when she wished him a happy 38th birthday in an Instagram post on Friday

Gaga (born Stefani Joanne Angelina Germanotta) continued, ‘I hope you have the best day, I’m the lucky actress who got to learn from you and lead with you every day.’

She concluded, ‘Shoutout to all your fans! I know why they adore you, it’s cuz you’re the best! (and you’re a weirdo like me ),’ Gaga concluded.

Gaga and Driver star opposite each other as Patrizia Reggiani and Maurizio Gucci, respectively, in House Of Gucci, a biographical crime drama film, directed by Ridley Scott. 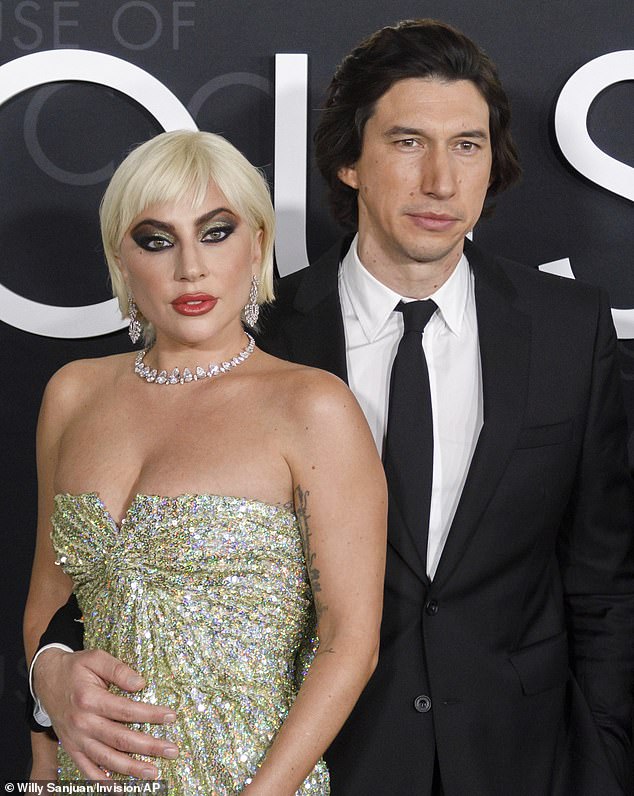 Lessons learned: ‘I’m the lucky actress who got to learn from you and lead with you every day.’ Gaga shared in her birthday tribute; two co-stars showed off their chemistry at the premiere of House Of Gucci in Los Angeles on Thursday 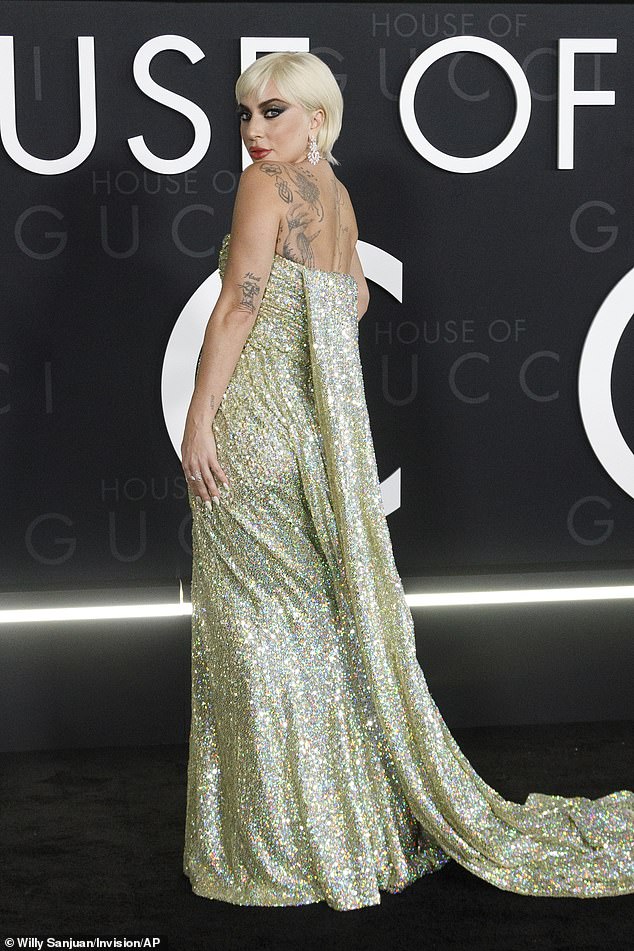 Born Like This: The actress and singer acknowledged that Driver is a weirdo like her; she is pictured striking a pose in her sequin gown for the House Of Gucci premiere

Based on the 2001 book The House of Gucci: A Sensational Story of Murder, Madness, Glamour, and Greed by Sara Gay Forden, the movie tells the true-crime story of how Reggiani (Gaga) married into the Gucci family and eventually plotted to assassinate her husband, Maurizio Gucci (Driver), heir to the designer family fortune.

Academy Award-winning actors Al Pacino, Jared Leto and Jeremy Irons round out the lead roles as other Gucci family members, along with Salma Hayek.

While her acting resume may be short, Gaga can also call herself an Oscar-winner, with her win for Best Original Song for A Star Is Born (2018). She also received a nomination for the film in the Best Lead Actress category. 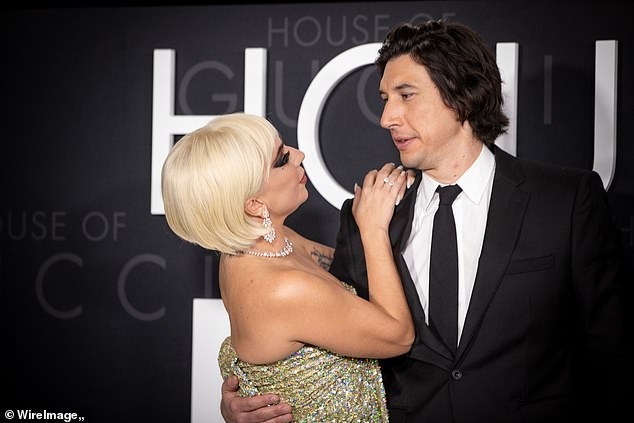 Gaga and Driver star opposite each other as Patrizia Reggiani and Maurizio Gucci, respectively, in House Of Gucci, a biographical crime drama film, directed by Ridley Scott 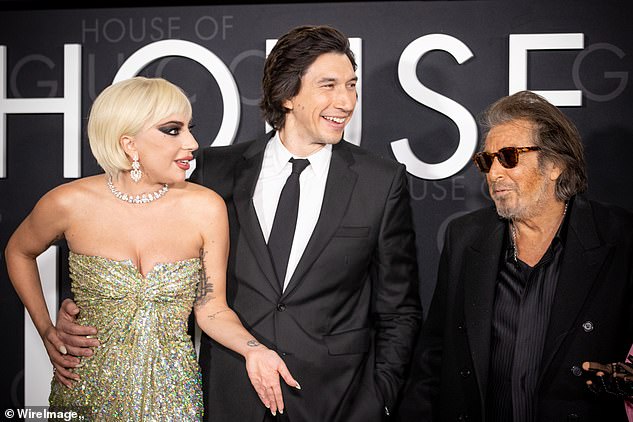 Star-studded: Al Pacino is also among the cast of House Of Gucci, along with Jared Leto, Salma Hayek and Jermey Irons

During a joint interview with the New York Times, Gaga praised Scott for empowering her as a woman, during the shoot.

‘I have to say this, Ridley: There’s not a lot of men that are directors who would empower a woman to be ugly on camera,” the actress and singer told the acclaimed director.

‘When I aged and had scenes where I was in this embarrassing, desperate state, he embraced the ugliness of this character and that should be commended, because it is ugly to be disposed of for your looks, it is ugly to be left for a younger woman.’

She added, ‘So I appreciate that Ridley took something that was sort of a ‘sexy murder’ and he let it be ugly.’

House of Gucci premieres in theaters on November 24. 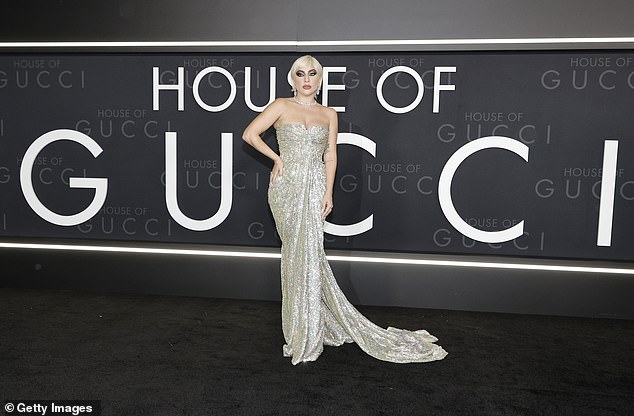 Coming; House of Gucci premieres in theaters on November 24