Kylie Jenner’s house is filled with sunflowers on Valentine’s Day (but is her ex Travis Scott to thank?)

Last year her then boyfriend Travis Scott filled her house with roses on Valentine’s Day.

And while she might be officially single, it seems someone didn’t want Kylie Jenner to go without.

Taking to her Instagram Kylie shared images of a room filled to the brim with yellow sunflowers – which she tagged her ‘favorite flower’.

In one shot, the 22-year-old makeup mogul can be seen standing among the field of freshly cut sunflowers in the foyer of her Calabasas mansion. 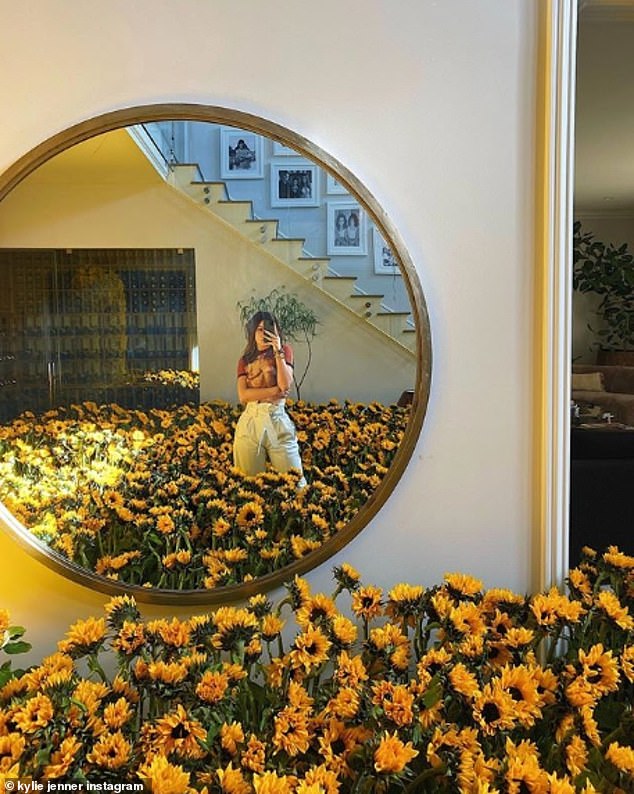 Rise and shine: Kylie Jenner took to Instagram on Saturday afternoon to share a snapshot of her Valentine’s Day surprise, which consisted of her entire foyer filled with sunflowers

‘Hi,’ captioned the reality star as she casually posed before a giant circular mirror.

She showed off the details of her impressive arrangement on her Instagram story.

Stormi can be seen in the short clips running through a yellow rose archway and taking in the floral wonders.

Beyond and around the arch were rows and rows of blooming sunflowers that nearly consumed Kylie’s foyer and living space. 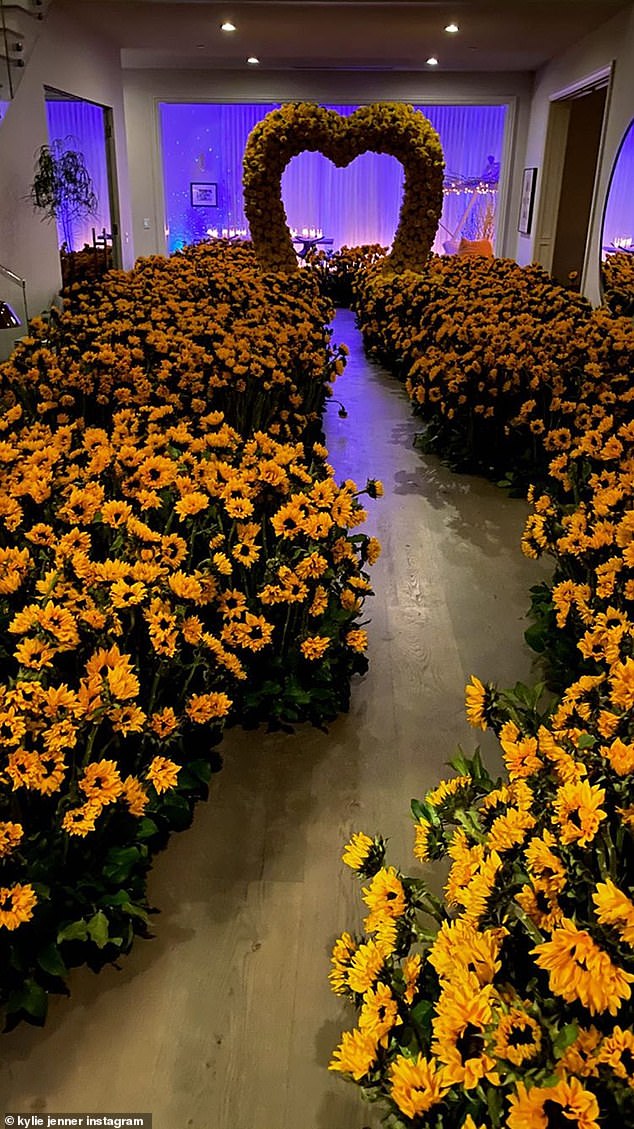 Sunflowers for days: Around and beyond the yellow rose arch were hoards of freshly cut sunflowers 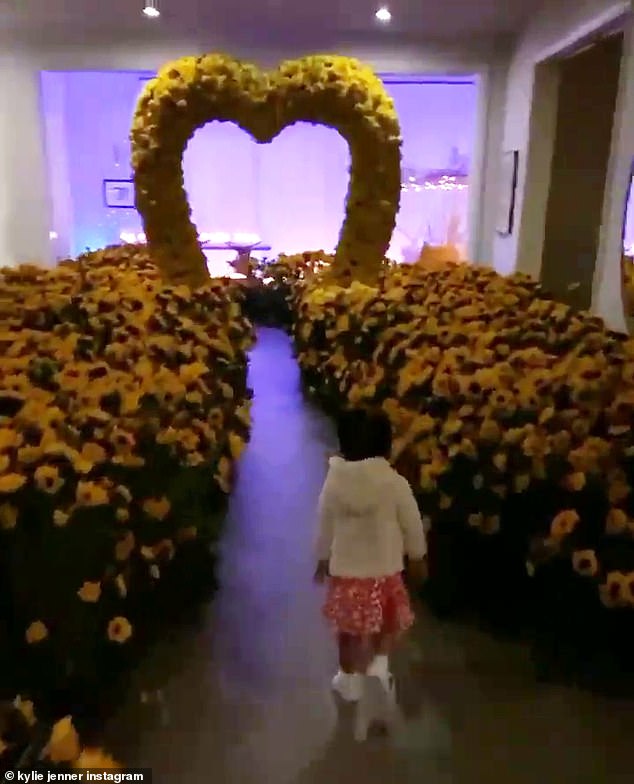 Stormi approved: In the clips shared to Jenner’s Instagram on Friday evening, daughter Stormi can be seen running under the yellow rose archway 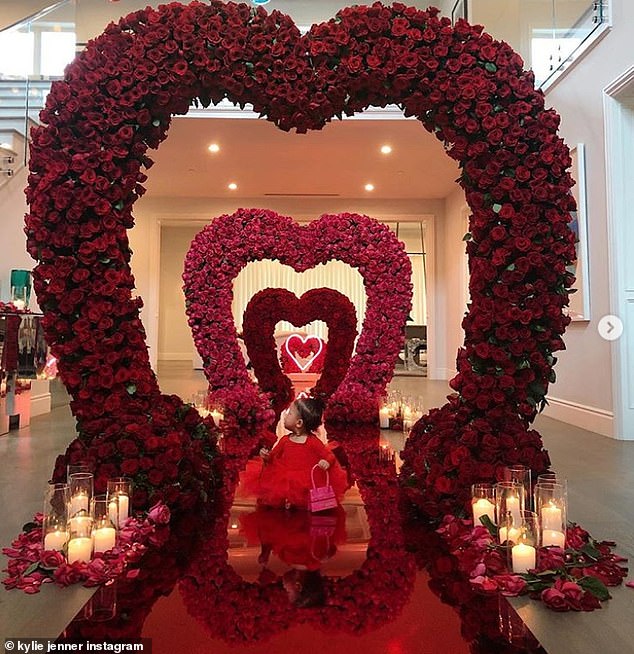 Mirror Image: On Valentine’s Day in 2019, Travis purchased his then girlfriend a picturesque present so large that Jenner had to place daughter Stormi next to it in order to properly depict the size Dreamy: The entire setting had a dreamy feel due to the diffused purple back lighting

The sunflower path ended at a slumber party style set-up consisting of a couch filled with pillows and candles.

The entire setting had a dreamy feel due to the diffused purple back lighting.

‘Dreaming,’ notated Jenner over one of the story’s clips.

The extravagance of the gesture looked suspiciously similar to the out of this world arrangement of roses ex beau Travis bestowed upon Kylie last year. 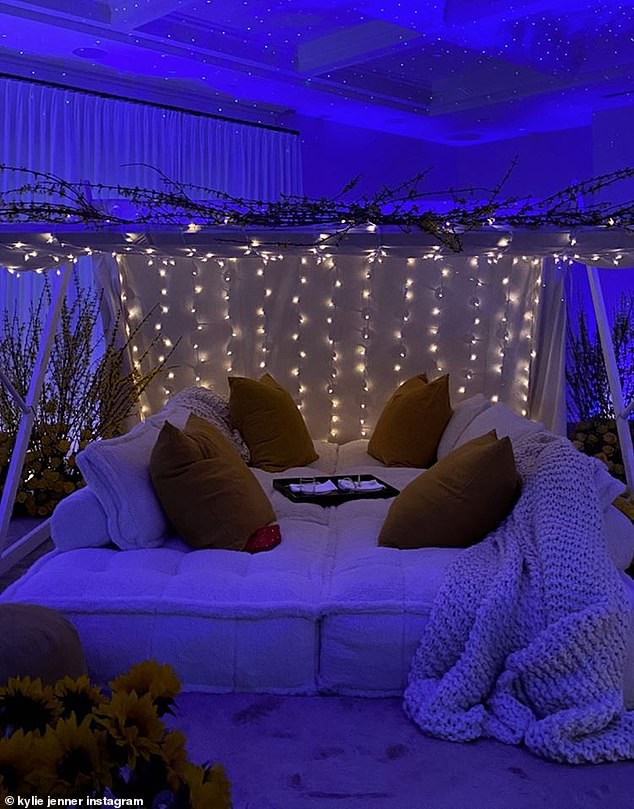 The big lead up: The elaborate floral displays led up to a slumber party style sitting area decorated with comfy pillows and lit candles 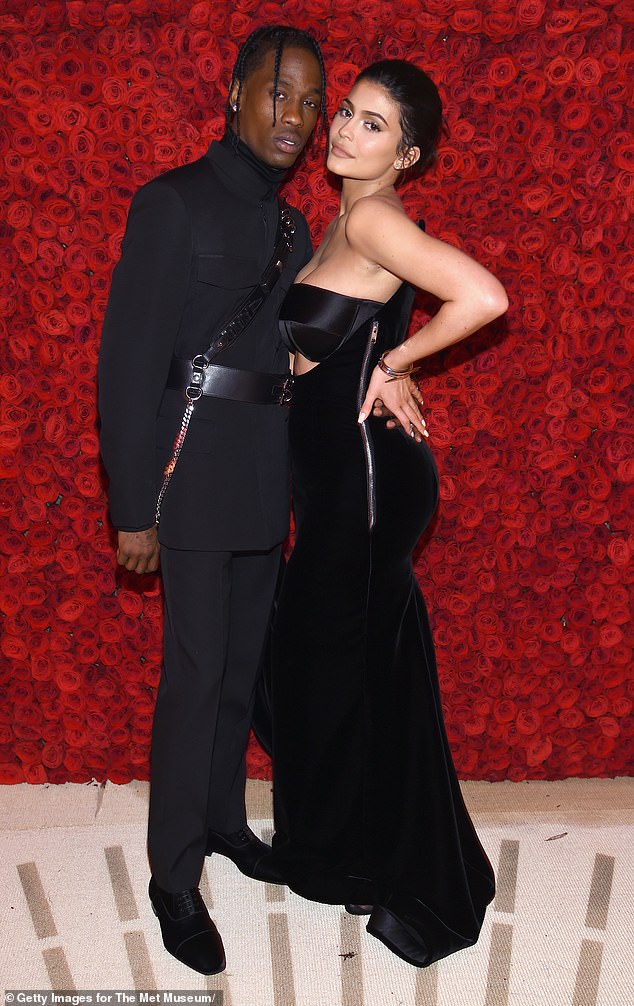 Could it be from him? Kylie and Travis have recently been spending a lot more time together following their split in October of last year

Then, Scott provided Jenner with a picturesque present consisting of giant heart shaped rose arrangements that paved an arched pathway from her doorway to her living area.

Interestingly, Scott and Jenner have been  spending plenty of time together in recent weeks.

Indeed the two have shared brief glimpses of one another on their Instagram Stories,  both out partying, and at home co-parenting two-year-old daughter Stromi. 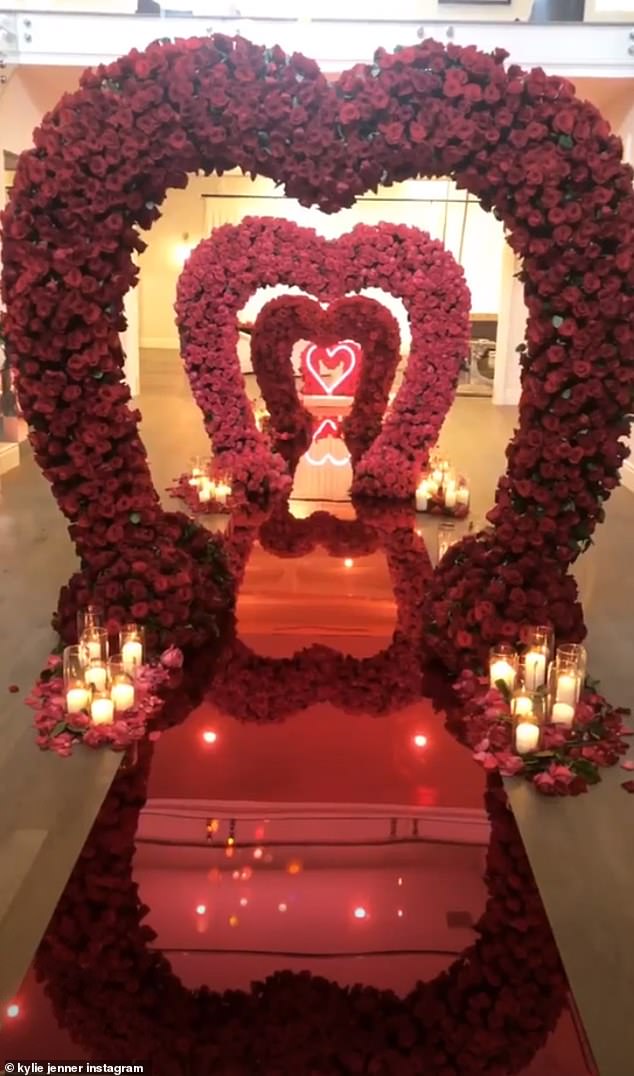 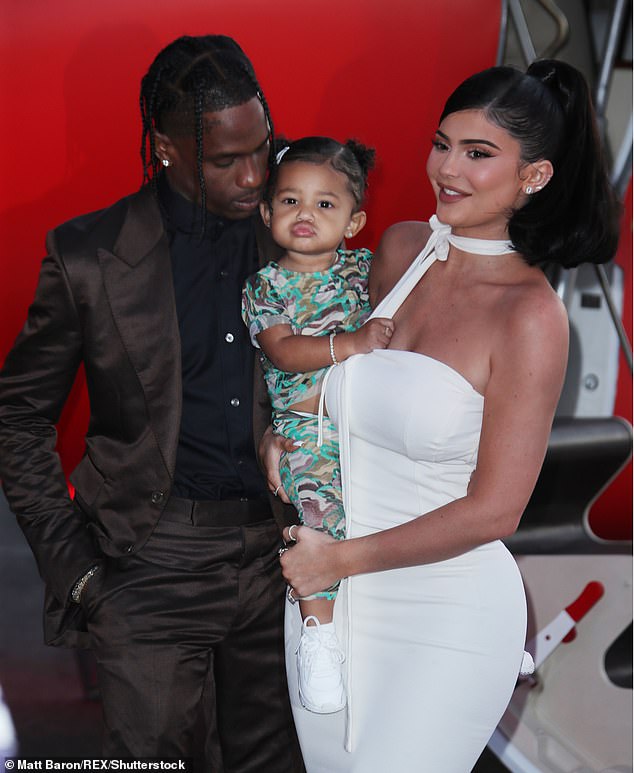 Working on it: The former couple have been spending a lot more time together as they work to  shape their relationship for the sake of their two-year-old daughter Stormi (center); the entire family were pictured on the red carpet for the premiere of Scott’s Netflix film Travis Scott: Look Mom I Can Fly in August 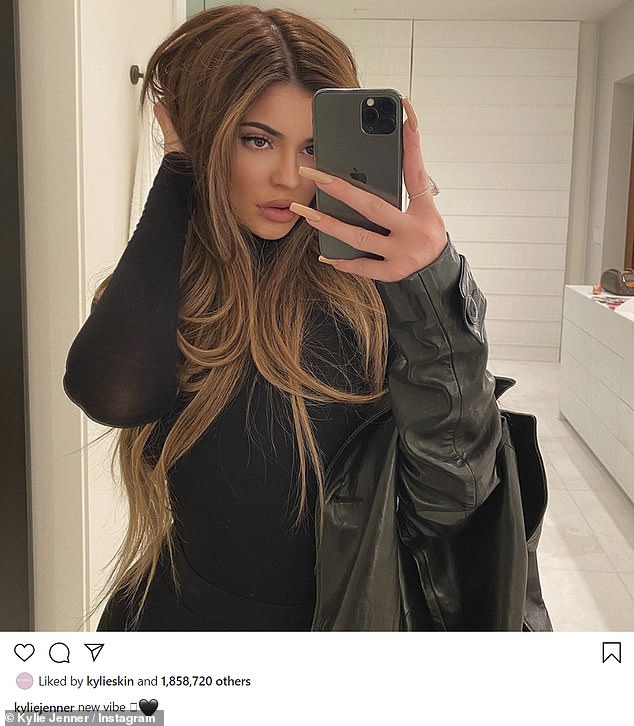 New vibe: On Valentine’s Day, Jenner spent the day with some of her closest ladies, as she donned a stunning honey toned wig 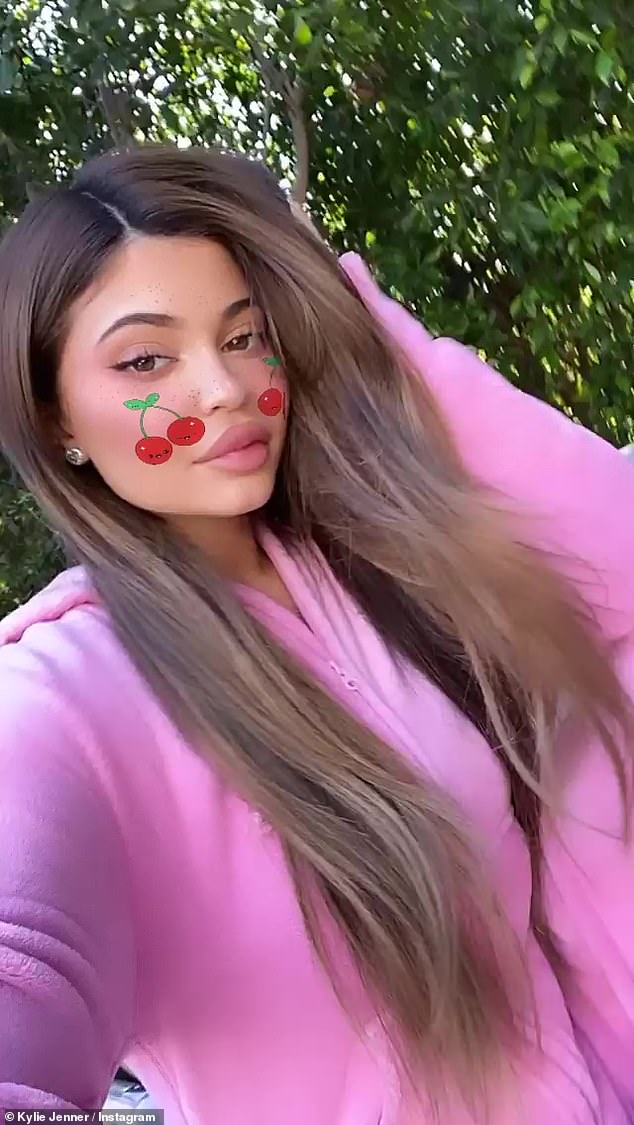 Pretty in pink: The honey haired gal changed into a pink onesie for the ladies-only hang on Friday afternoon 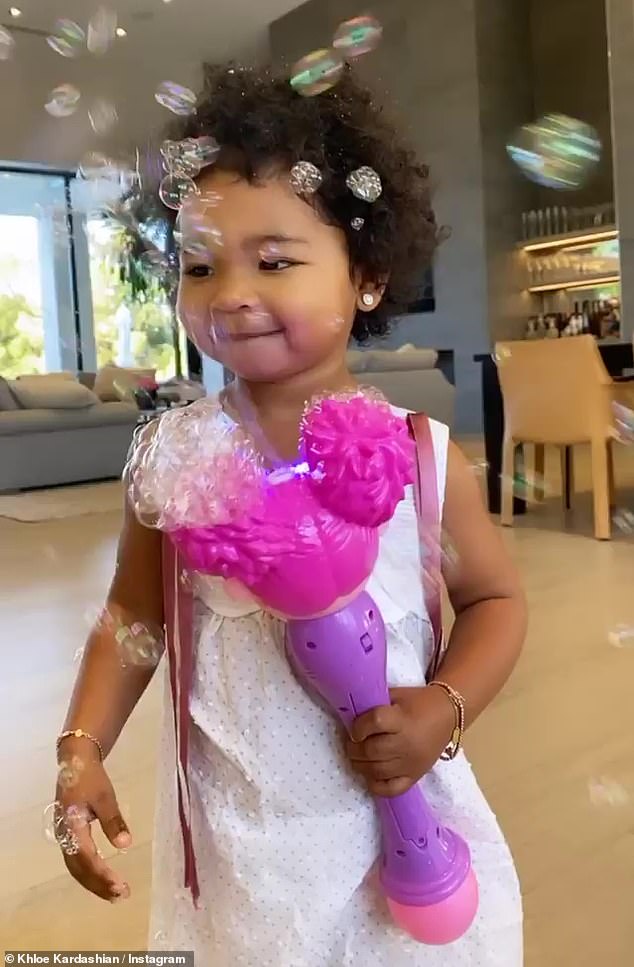 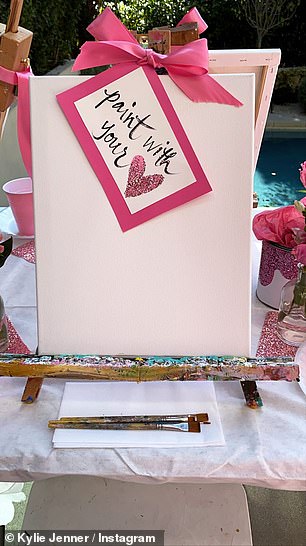 Paint a memory: The event, held at Jenner’s home, offered guests the opportunity to paint a memory; pictured here are Stormi’s hand prints 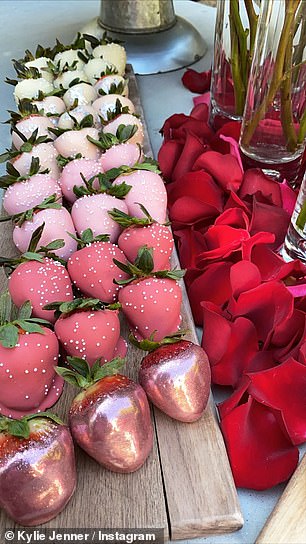 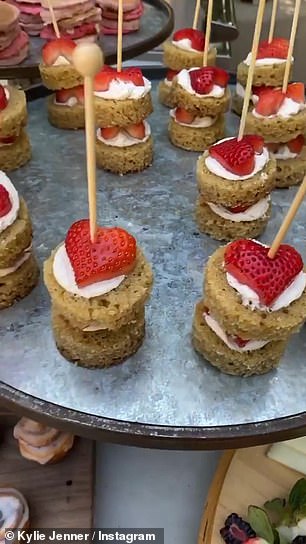 Yummy! Jenner had plenty of treats to offer her beloved guests, including an array of uniquely dipped chocolate covered strawberries and bit-sized cakes

She threw a ‘girls only’ Valentine’s day party, where sister Khloe and her nearly two-year-old daughter True were in attendance.

For the occasion, the 22-year-old sported a honey toned wig that cascaded down to her stomach.

She showed off the new look for her boy-free Valentine’s Day brunch on Instagram with the caption, ‘new vibe’ followed by a black heart emoji. 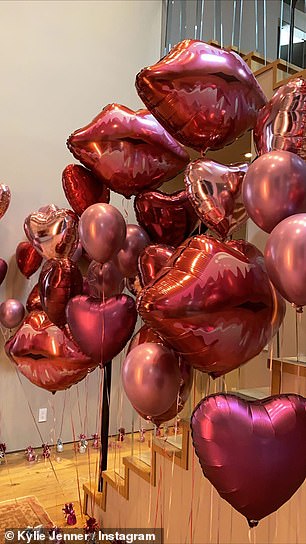 Personal touch: Jenner decorated the backyard event with lip and heart shaped balloons, while each seat at the the table featured a personalized table setting