Khloe Kardashian was treated to a trip on her sister Kylie Jenner’s private jet for her 38th birthday.

Along with a photo of her sitting on the ladder of the aircraft Khloe wrote, ‘Wheels Up on Kylie Air.’ 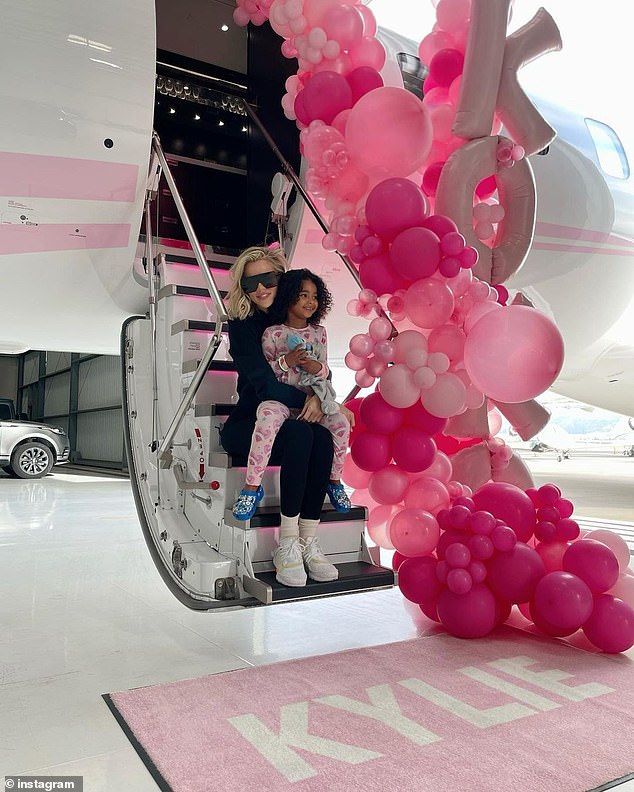 Fun! Khloe Kardashian was treated to a trip on her sister Kylie Jenner’s private jet for her 38th birthday

She didn’t say where the flight was headed but she added, ‘Kamp KoKo is underway.’

Her niece North West celebrated her recent June birthday in a similar way, with mom Kim Kardashian flying the nine-year-old and her friends to Wyoming for a ‘Camp North’ retreat via Kim Air.

Kylie’s pink and white jet was decked out in a balloon arch with different shades of pink.

Four pale pink balloons spelled out ‘Koko’ as they decorated the entrance of the airliner. 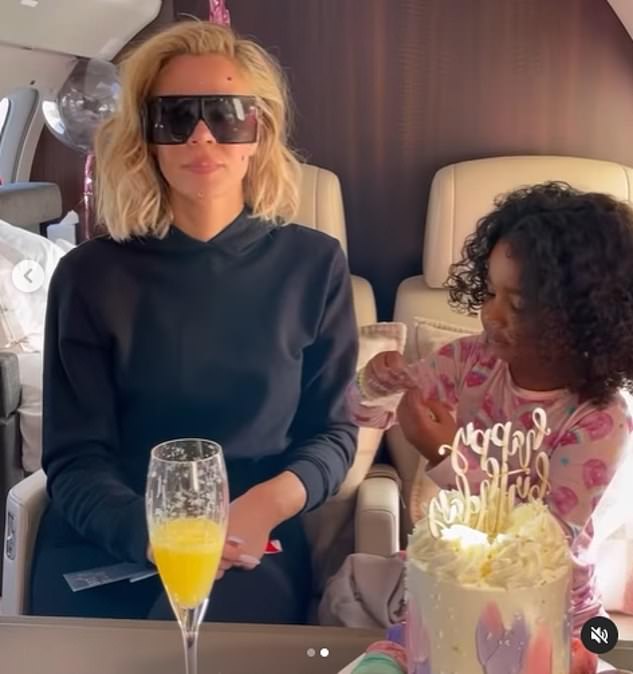 Mommy-daughter time! Khloe’s four-year-old daughter True, who she shares with ex Tristan Thompson, joined her on the excursion

Her four-year-old daughter True, who she shares with ex Tristan Thompson, joined her on the excursion.

The tot was clad in a long-sleeved pajama set with hearts patterned throughout.

Also along for the ride were Khloe’s niece Chicago, four, brother Rob Kardashian, 35, and his daughter Dream, five.

Rob, who’s chosen to live a life outside of the spotlight, was only present with a shot of his back for a few seconds in a video upload. 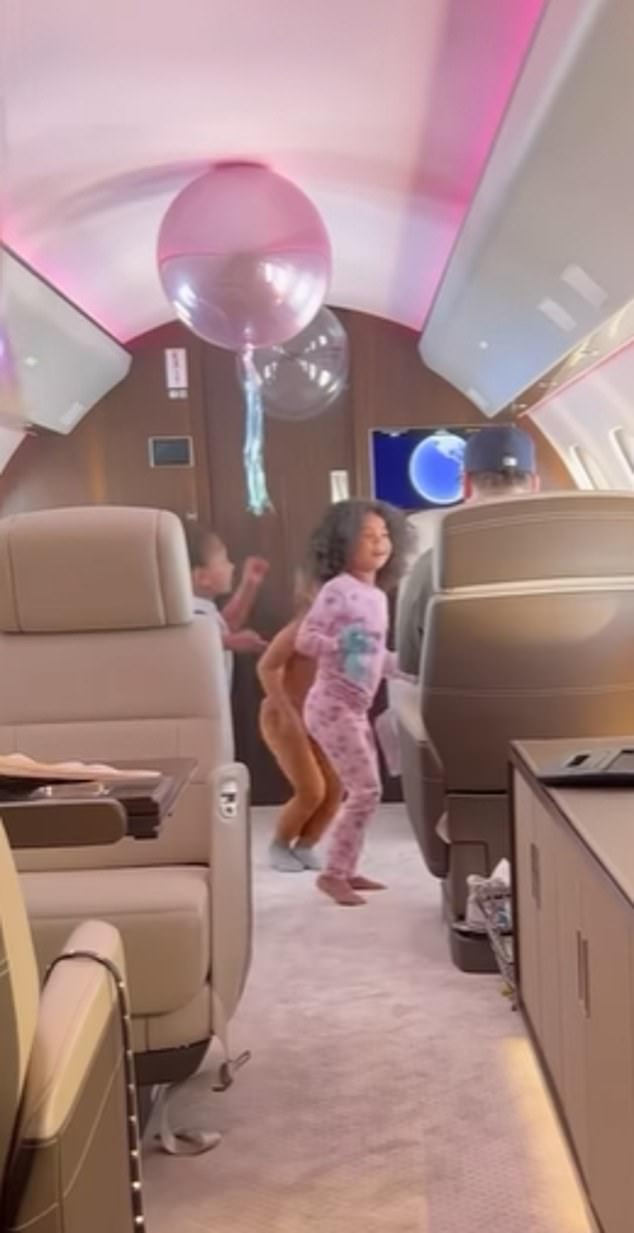 A good time: True appeared to have a blast on the private plane in her adorable pink pajamas 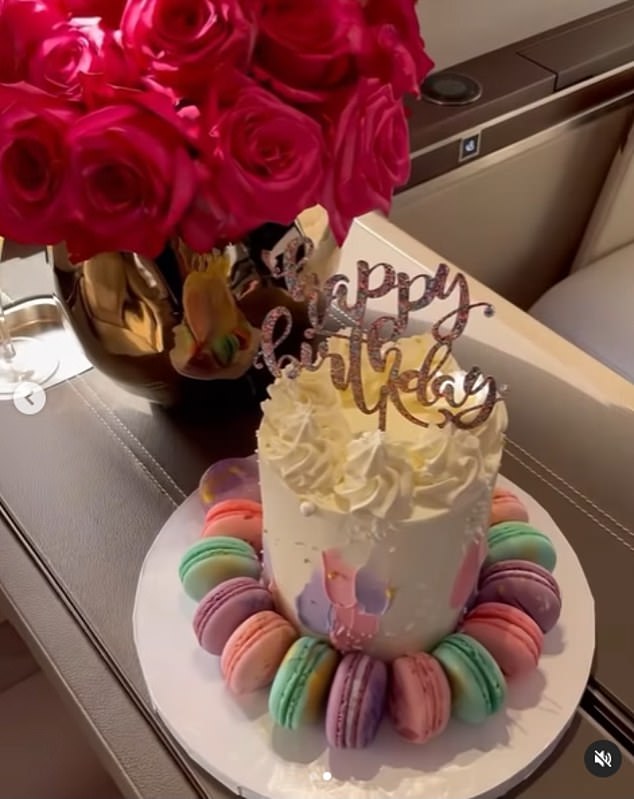 Festive: A birthday cake and macaroons awaited Khloe aboard the sleek aircraft

She flaunted her figure in a curve-hugging, Barbie-pink latex mini dress with matching pink pumps.

The denim designer posed for pictures in front of a balloon sculpture reading ‘Happy birthday Khloe, love you.’

She wrote in her caption, ‘Thank you all so incredibly much for all of the birthday love. I have been overwhelmed with love and blessings and I am so beyond thankful.’ 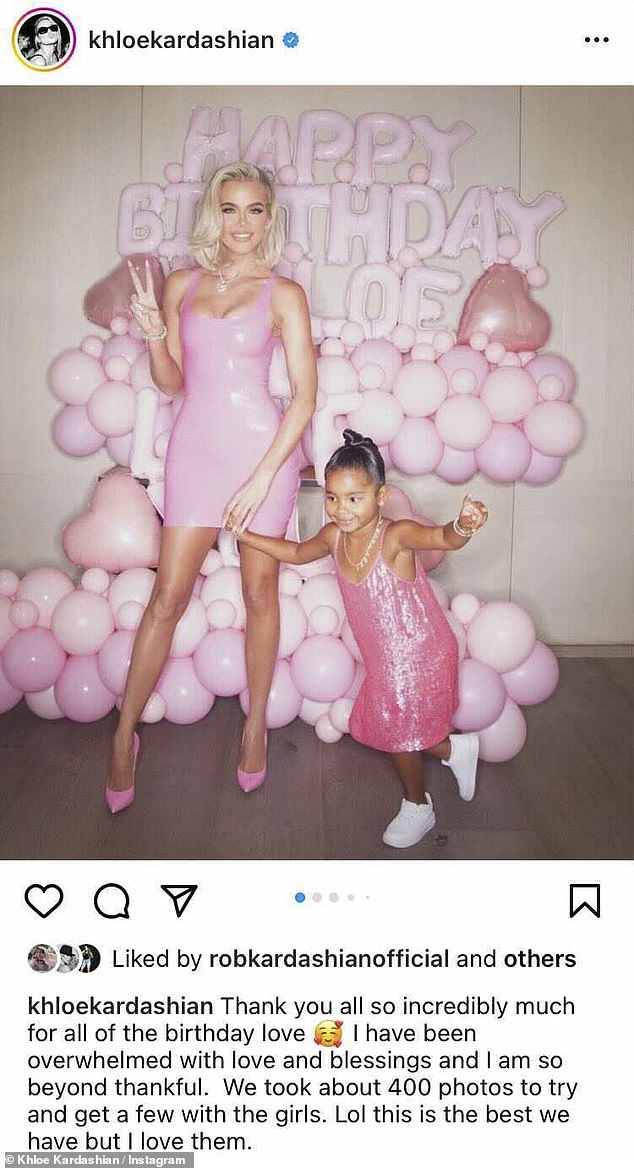 She continued, ‘We took about 400 photos to try and get a few with the girls. Lol this is the best we have but I love them.’

She was referring to True and Chicago, who made appearances in some of the bright shots.

Khloe wore her blonde hair in a voluminous shoulder-length bob and wore glinting diamond jewelry around her neck and wrist. 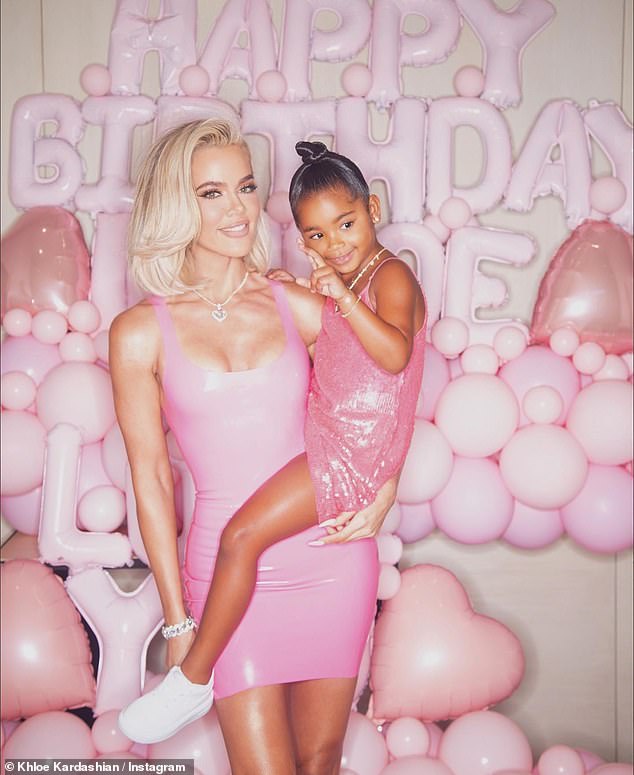 Picture perfect: Khloe wore her blonde hair in a voluminous shoulder-length bob and wore glinting diamond jewelry around her neck and wrist