Travis Scott arrived at the 2022 Billboard Music Awards on Sunday night with Kylie Jenner and their daughter Stormi.

The rapper is preparing to give his first TV performance since his deadly Astroworld Festival tragedy that left ten people dead in November last year.

The 31-year-old performer smiled for cameras as he and Kylie, 24, walked the red carpet at the star-studded event, held at the MGM Grand Garden Arena in Las Vegas. 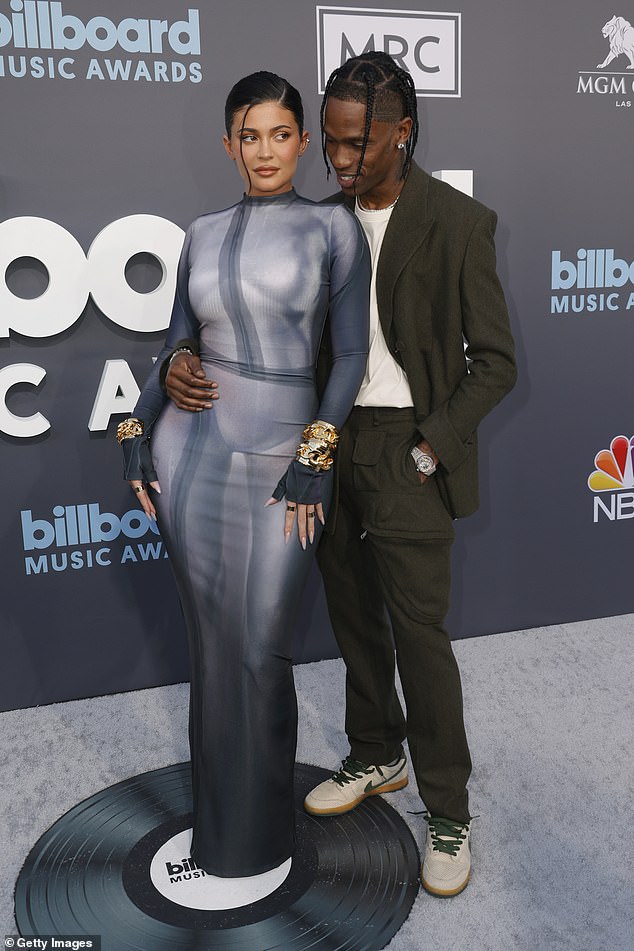 By his side: Kylie Jenner supports Travis Scott at the Billboard Awards as they arrive with daughter Stormi for his first TV performance since Astroworld tragedy

Kylie and Travis were seen walking with their four-year-old daughter who looked thrilled to be at the bustling ceremony.

The billionaire makeup mogul showed off her famous curves at the event, wearing a figure-hugging graphic print dress.

Meanwhile, Stormi looked like a little superstar in an off-the-shoulder gown with matching sneakers as she was guided by her mom Kylie along the red carpet. 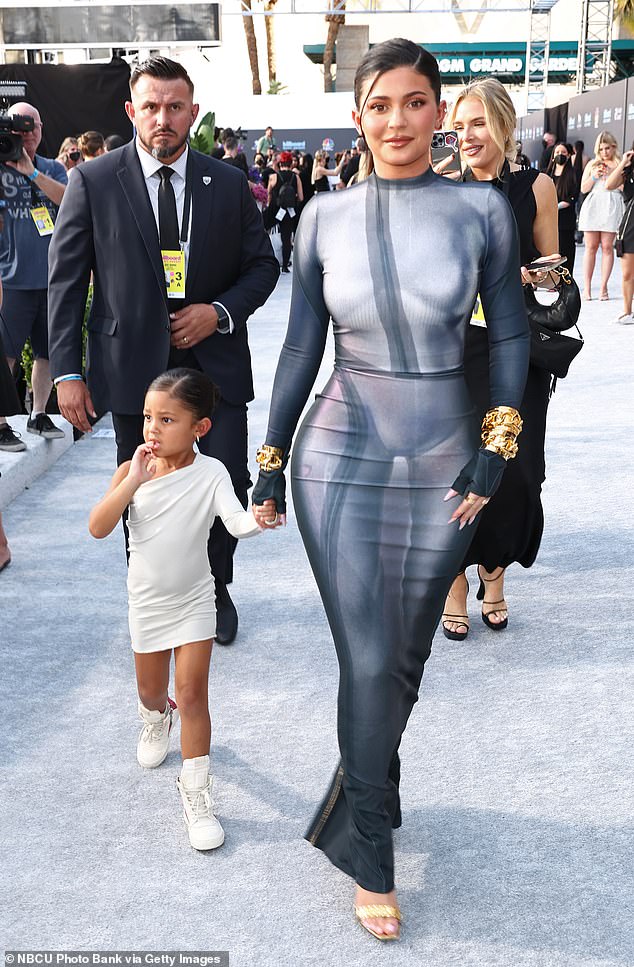 Little superstar: Meanwhile, Stormi looked stylish in an off-the-shoulder gown with matching sneakers as she was guided by her mom Kylie along the red carpet 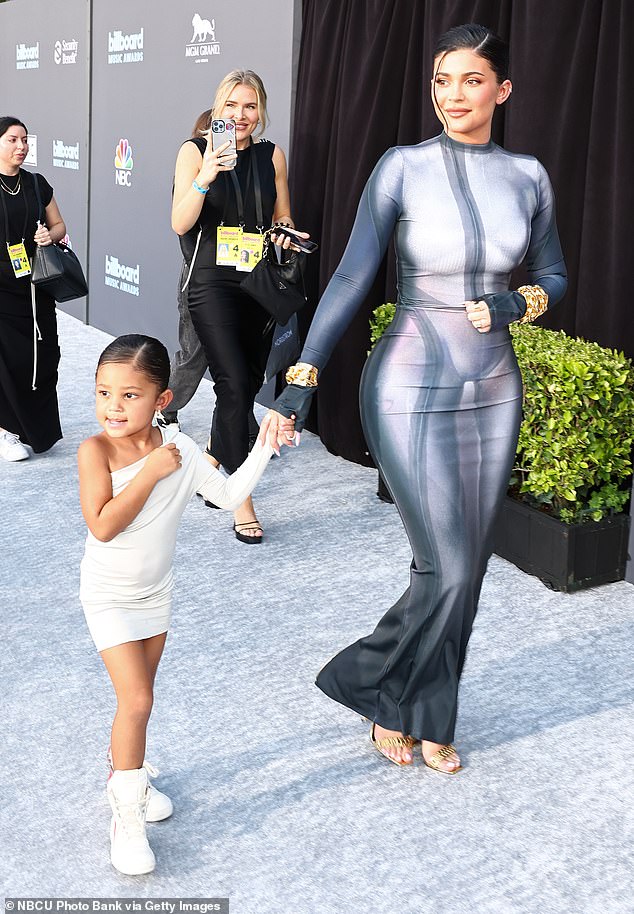 Mommy’s girl: Stormi looked thrilled to be at the event with her parents Kylie Jenner and Travis Scott

At one point, Travis was seen cradling Stormi as he waited for Kylie to pose for solo shots.

Earlier in the day, Kylie had posted a snap of herself and Stormi on her private jet, as they made their way into Las Vegas for the event.

While this has marked Scott’s first performance back on live television, he recently made his first public return to performing during a nightclub appearance in Miami last week. 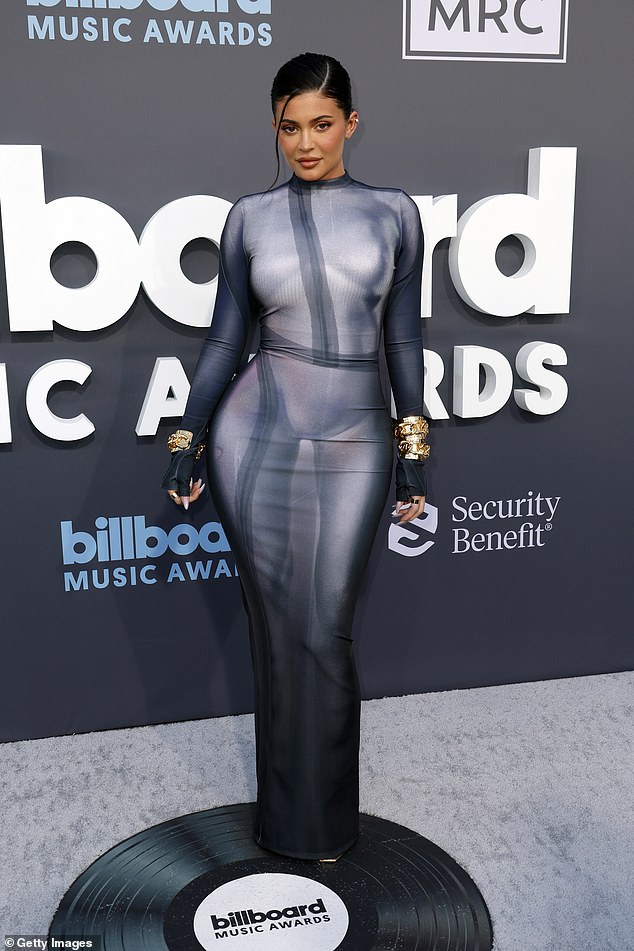 Shape: the Kardashians star showed off her famous curves in a figure-hugging outfit on the carpet 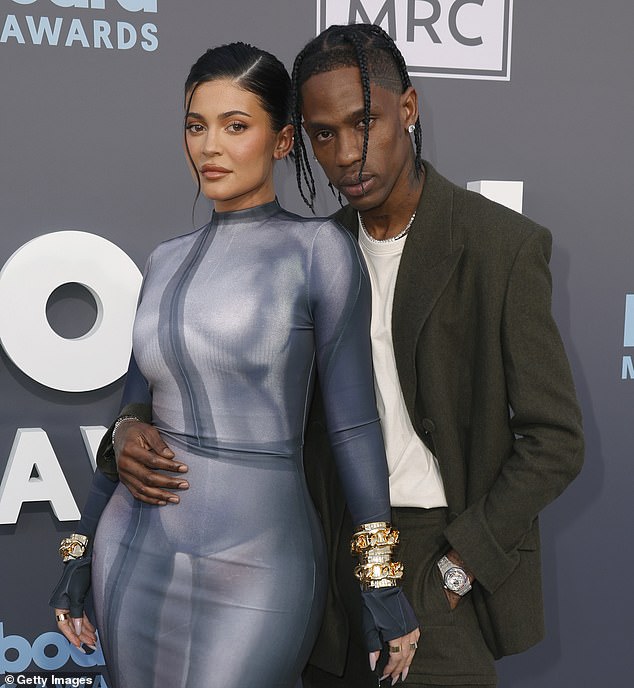 Keeping close: The 31-year-old performer smiled for cameras as he and Kylie, 24, walked the red carpet at the star-studded event 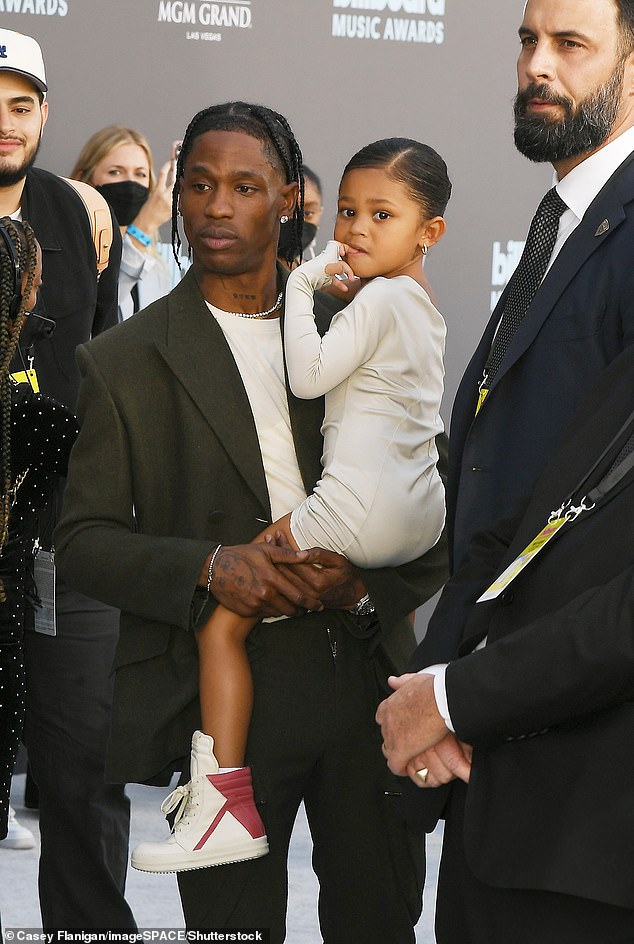 Stormi’s first Billboards! Travis held his little one close as he arrived at the event

The deadly Astroworld incident took place during Scott’s performance set on the evening of Friday, November 5, in his hometown of Houston, Texas.

It spawned countless legal woes for Scott, as well as intense public backlash for his alleged handling of the deadly incident.

He was also sacked as a 2022 Coachella headliner, as well as a headliner for the Day N Vegas festival last year.

This week it was revealed in a new court filing that more than 4,900 people were injured in the stampede at his concert. 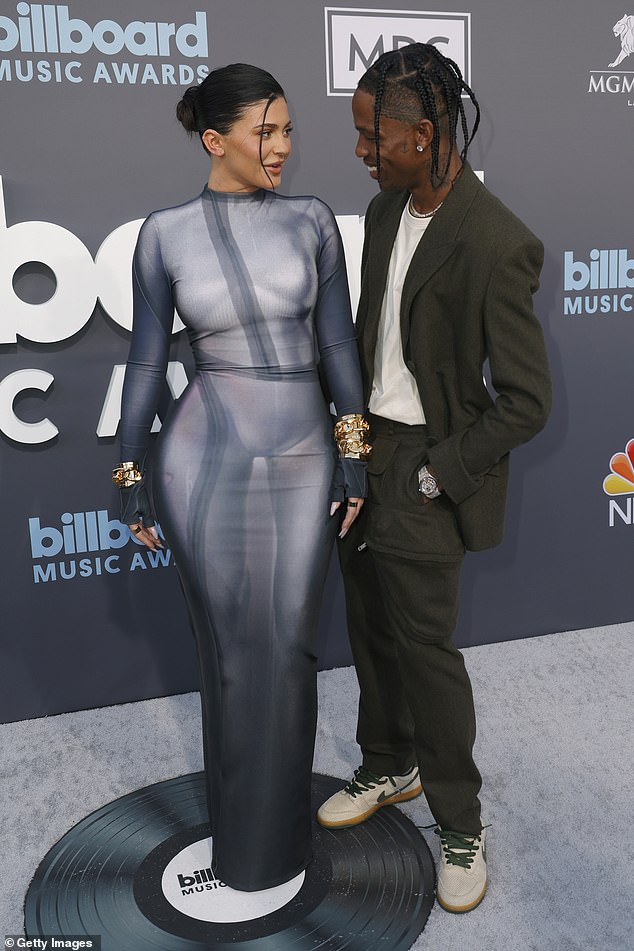 The look of love: Kylie and Travis smiled at one another as they posed on the carpet

Comeback: While this has marked Scott’s first performance back on live television, he recently made his first public return to performing during a nightclub appearance in Miami 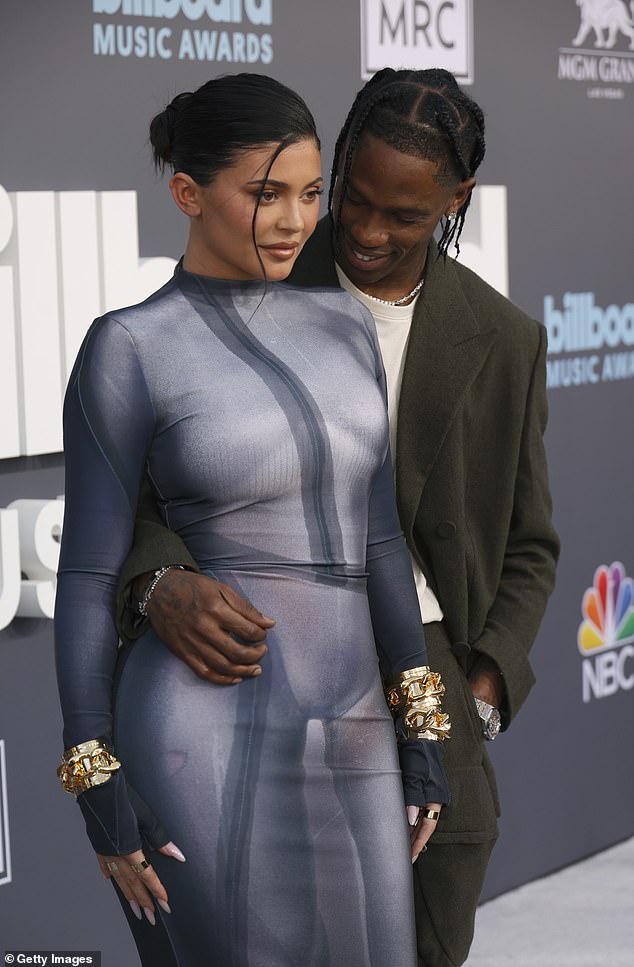 Red carpet ready: The couple arrived for the rapper’s much-talked about performance 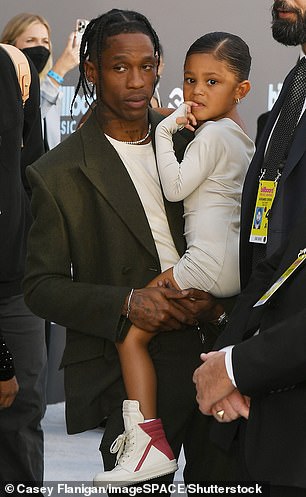 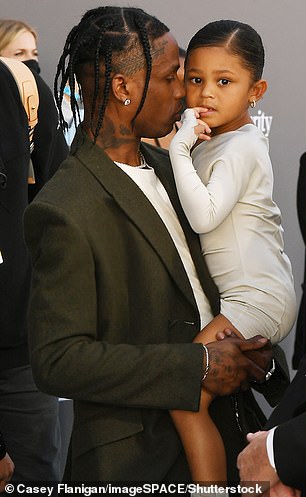 Baby girl: Travis posed with his daughter Stormi upon arrival

They claim an additional 1,649 received less extensive treatment, and the severity of 2,540 concertgoers’ injuries is still under review.

The filing did not specify what ‘extensive’ or ‘less extensive’ treatment comprised. When reached by DailyMail.com on Tuesday, Mithoff’s office refused to elaborate citing a court-issued February gag order. 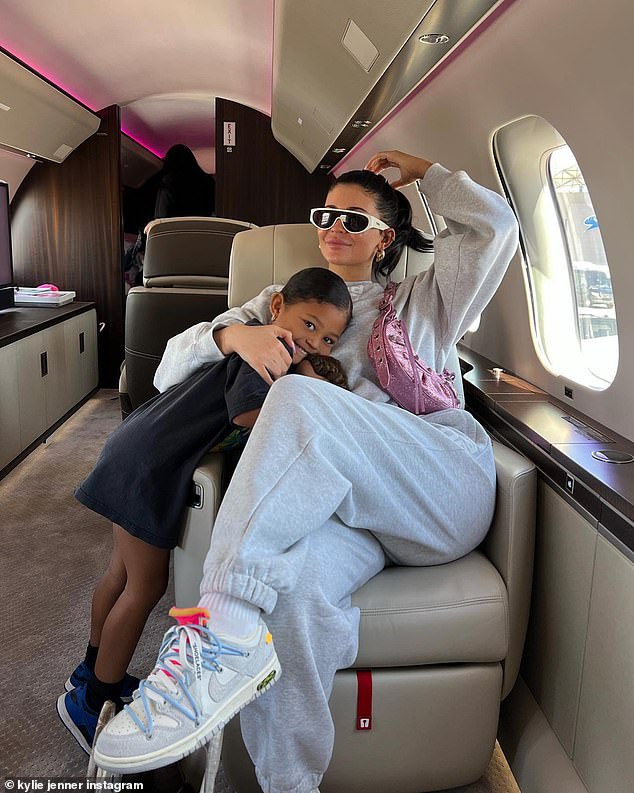 On her way: Kylie travelled to Vegas via private jet with her four-year-old daughter Stormi

They also refused to disclose the monetary damages victims are suing for.

It has been previously reported that around 125 people have filed civil lawsuits against Scott and concert promoter Live Nation with potential damages amounting to $750 million.

On Thursday, RollingStone reported that Shanazia Williamson and Jarawd Owens are among those suing Scott, Live Nation and others, claiming in a lawsuit that Williamson was ‘trampled and crushed resulting in the death of her and Jarawd’s unborn child.’ 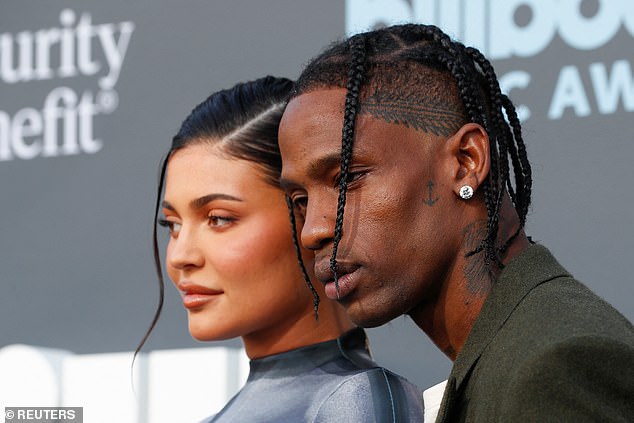 Side by side: The couple happily posed on the red carpet together 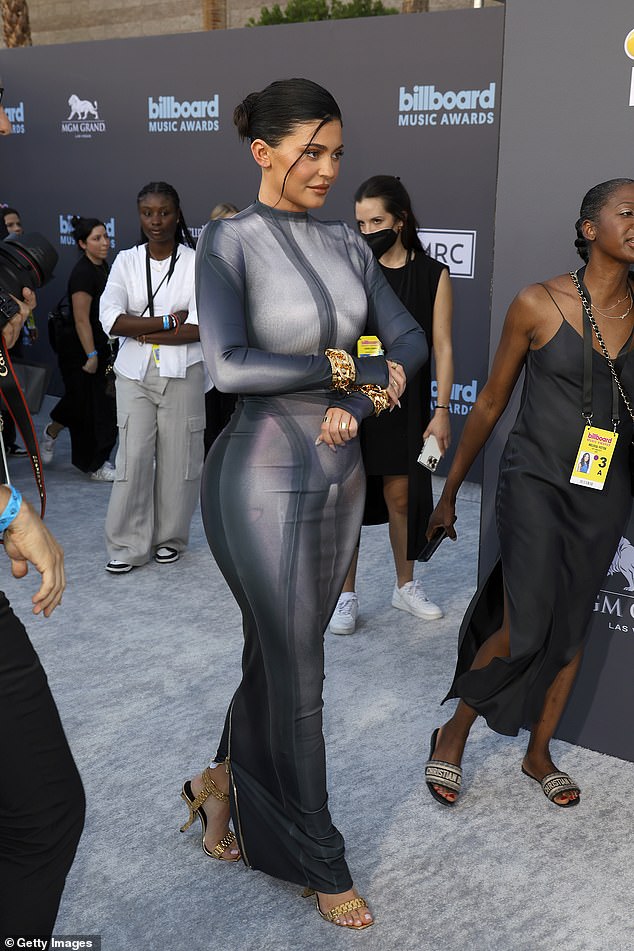 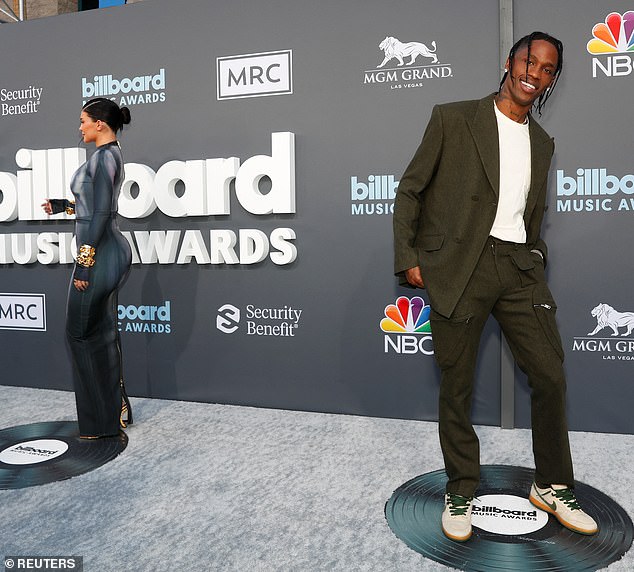 Together apart: The pair also posed solo while on the carpet at the event 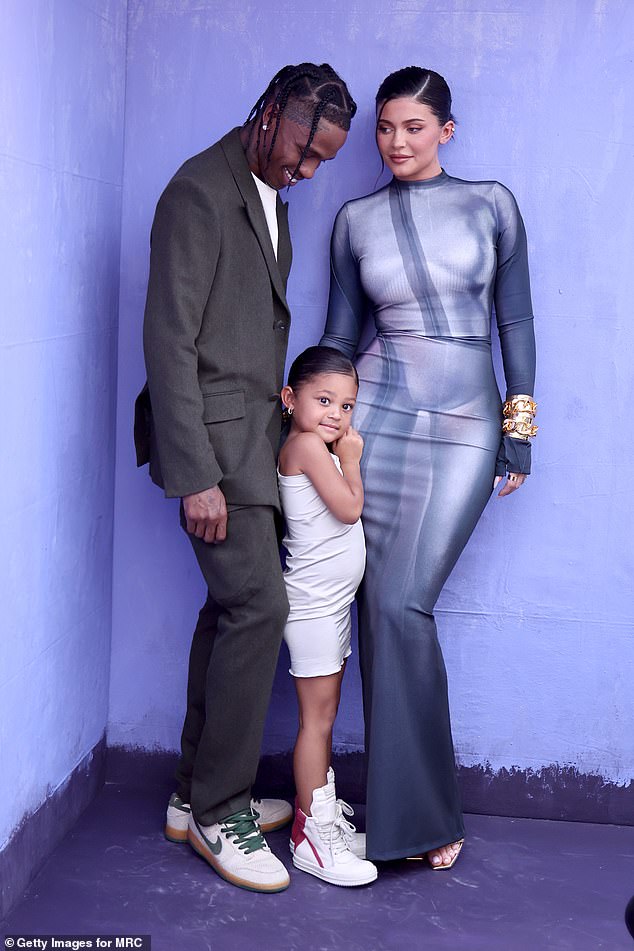 Their little angel: The trio posed together for a family portrait 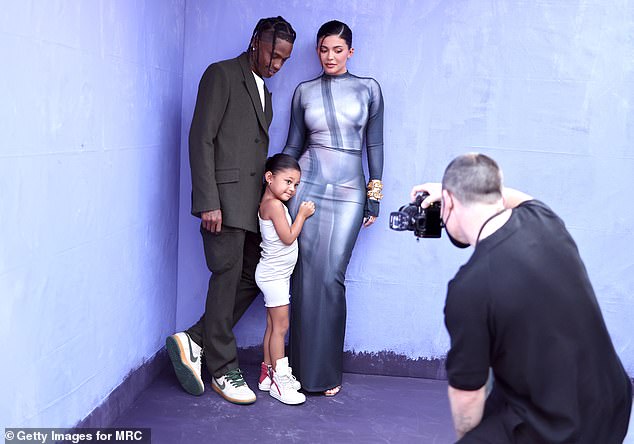 Portrait: Stormi was posing up a storm at the event with her parents

Meanwhile, Sean ‘Diddy’ Combs, who is this year’s host of the Billboard Music Awards, said prior to Scott’s performance that he ‘demanded’ the rapper should be in attendance on the night.

‘For the Billboard Music Awards, I made a request, I made a demand, I said my brother Travis Scott has to perform,’ Diddy revealed this week.

He also spoke about insisting on Scott performing during an interview with Revolt Black News, where he stressed Scott should be forgiven.

‘There will be no canceling on my watch. Love is about forgiveness… so that was why it was important for me to have Travis Scott perform. It’s going to be a great night,’ he said. 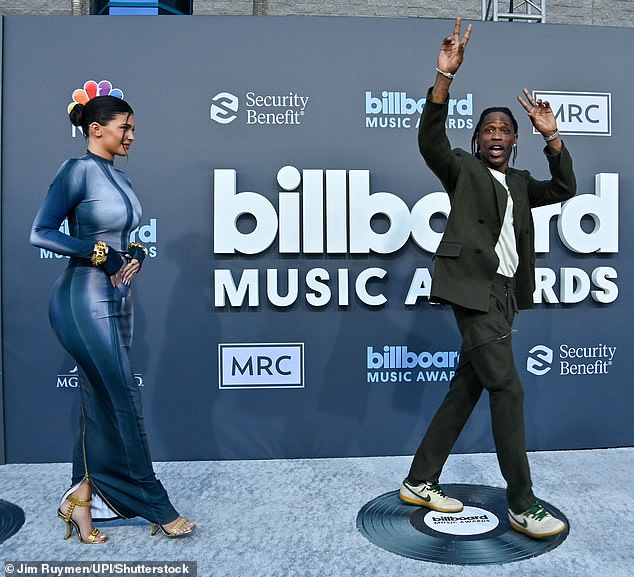 Peace out: Travis flashed a peace sign to fans as he left the red carpet arrival area

Lil Baby (The Back Outside Tour)

The Rolling Stones (No Filter Tour)

GIVĒON “When It’s All Said And Done…Take Time”

Summer Walker “Still Over It”

Moneybagg Yo “A Gangsta’s Pain”

Coldplay “Music Of The Spheres”

CeCe Winans “Believe For It”

CeCe Winans “Believe For It”

Lil Nas X “MONTERO (Call Me By Your Name)”

Masked Wolf “Astronaut In The Ocean”

Doja Cat & The Weeknd “You Right”

Masked Wolf “Astronaut In The Ocean”

Chris Stapleton “You Should Probably Leave”

Jason Aldean & Carrie Underwood “If I Didn’t Love You”

Luke Combs “Forever After All”

THE ANXIETY: WILLOW & Tyler Cole “Meet Me At Our Spot”

Ye “Off The Grid”

Ye “Off The Grid”