Now Kylie Jenner is ready to partner on a new line of cosmetics with the long-standing French luxury brand.

The 22-year-old Keeping Up With The Kardashians star shared a steamy photo to Instagram late Monday night announcing that the Kylie X Balmain collection would drop this week during Paris Fashion Week. 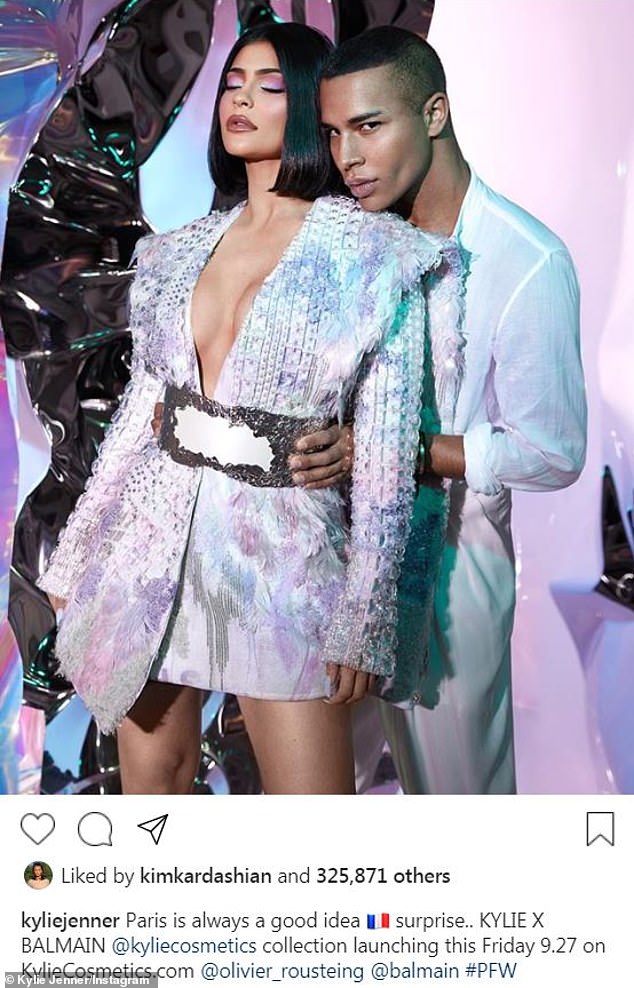 Kylie was dressed in a stunning blazer-style dress with a low-cut top that showcased her prominent cleavage.

The busy outfit was covered with white, pink and violet feathers, as well as sewn panels of reflective gleaming glass.

The 5ft6in billionaire had a thick white belt sinched around her waist with a metallic covering resembling tin foil, and her lustrous raven tresses were done up in a stylish bob.

Joining Kylie in the photo was Balmain Creative Director Olivier Rousteing, who wore an all-white outfit and had his hands placed gingerly around her belt. 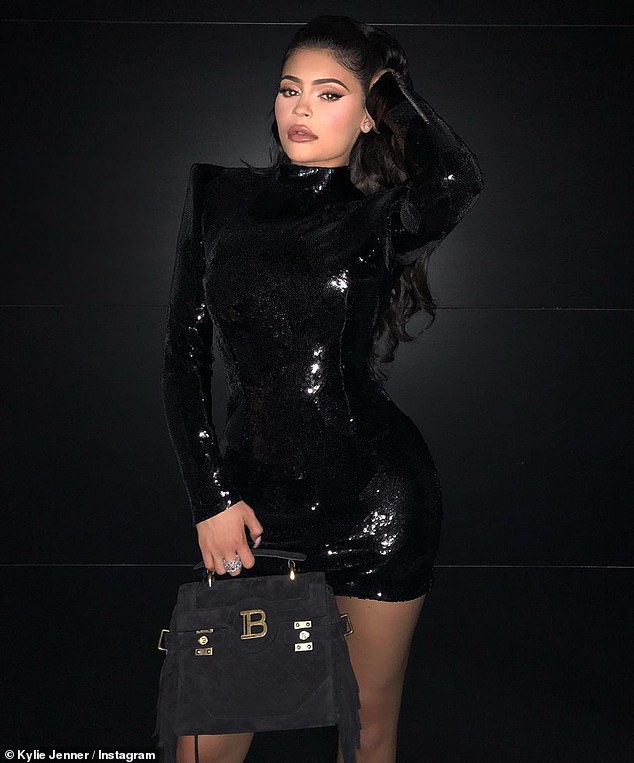 Double Balmain: Last week, Kylie repped the brand with a steamy black sequined dress and one of its popular handbags

‘Paris is always a good idea,’ she wrote in the caption, adding in a French flag icon.

So far the entrepreneur and reality TV star hasn’t detailed what the collection will entail or how it will differ from her other Kylie Cosmetics offerings.

The collaboration is a logical step for Kylie, who has made her adoration for the brand well-known.

Most recently, she showed off Wednesday on Instagram in a short black Balmain dress covered in gleaming sequins. 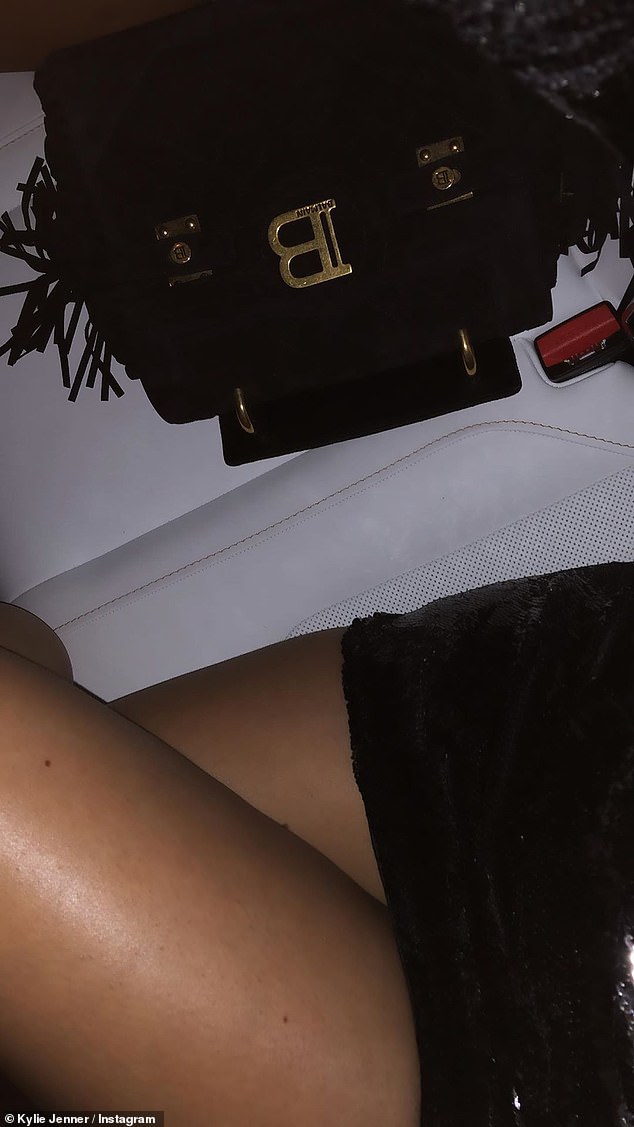 Detailed: A closeup shot highlighted the bags fringed sides and prominent ‘B’ logo, as well as giving fans a glimpse of Kylie’s thighs

She paired the sultry look with a black suede version of the brand’s popular handbag.

The close-up highlighted the intriguing fringe on the bag’s side, as well as it’s prominent metal ‘B’ logo.

Though she shared the Kylie X Balmain announcement, which would have been photographed sometime earlier, the reality star was feeling under the weather on Monday.

She skipped out on the Emmy Awards ceremony the previous night because of the illness, leaving her sisters Kendall Jenner and Kim Kardashian to represent the family on their own. 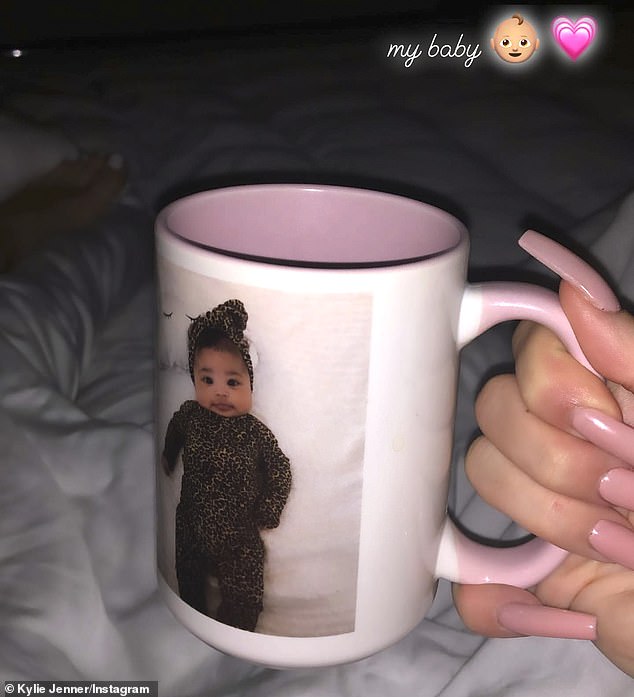 Too cute: Kylie skipped Sunday’s Emmy ceremony because she was sick, so she shared photos from home on Monday while recuperating, including one of a coffee mug with one-year-old Stormi looking adorable in a leopard-print onesie

Kylie shared a cute photo to her Insta Stories on Monday night that featured a coffee mug with a sweet photo of her daughter Stormi, now one, wearing a cute leopard-print onesie

She shares the adorable tot with her boyfriend, the rapper Travis Scott.

Kylie also had the presence of her bff Sofia Richie to look forward to while she was convalescing.

‘Bae came to take care of me @sofiarichie,’ she captioned a photo that appeared to show the two holding hands in bed.

Illuminating the room in vibrant red light was Kylie’s nightlight reading ‘The Kiss Was Beautiful’ in neon letters set within a lopsided heart. 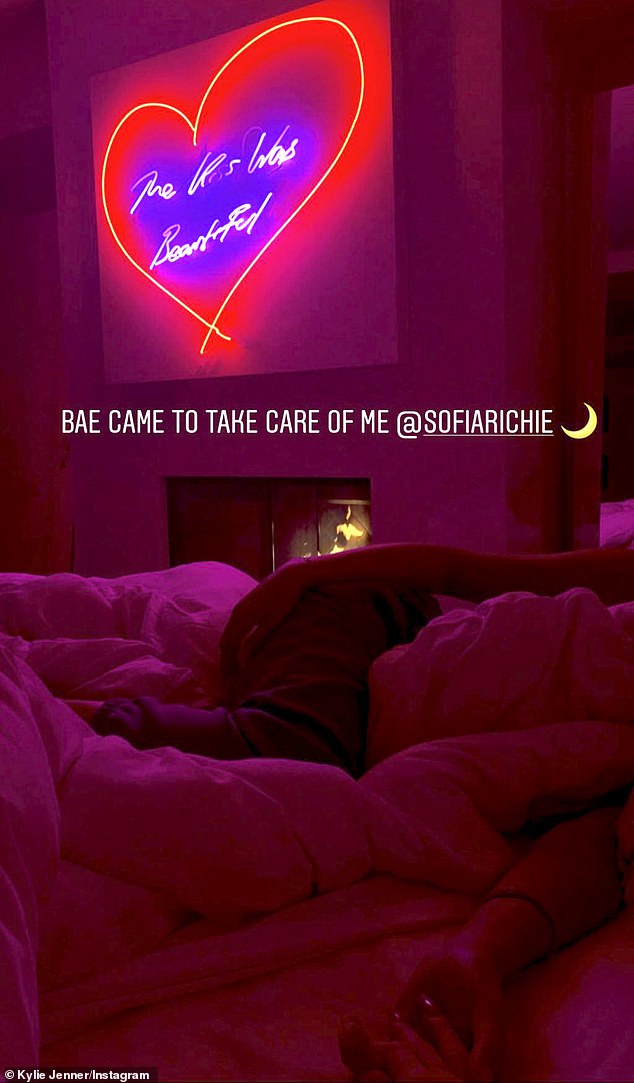 Comforting: Kylie also had the presence of her bff Sofia Richie to look forward to while she was convalescing. She posted a photo of the two holding hands in bed under her neon light reading ‘The Kiss Was Beautiful’