Kourtney Kardashian’s son Mason, 12, DID attend her Italian wedding to Travis Barker… after Twitter users wondered whether he was included

After a plethora of online speculation on whether Mason, 12, was at the event, Kourtney’s, 43, eldest son appeared in a photo posted by friend Carl Dawson, who documented the wedding celebrations on his Instagram Stories. He was there: Kourtney Kardashian’s, 43, son, Mason Dash Disick, 12, attended her lavish Italian wedding to drummer Travis Barker, 46, on Sunday

Mason looked dapper for the event, sporting a black jacket over a white T-shirt, and wore his hair in a straight style, tucked away behind his ears.

His siblings were also in attendance, with Penelope serving as a flower girl.

Barker’s, 46, son Landon, 18, and daughter Alabama, 16, with ex-wife Shanna Moakler, 47, were also there, along with his 23-year-old stepdaughter Atiana, whom Moakler shares with boxer Oscar De La Hoya, 49.

Social media users were relieved to see Mason at the celebration, with influencer Amanda Hirsch reposting his photo from the event and writing: ‘Mason is there everyone calm down!’ 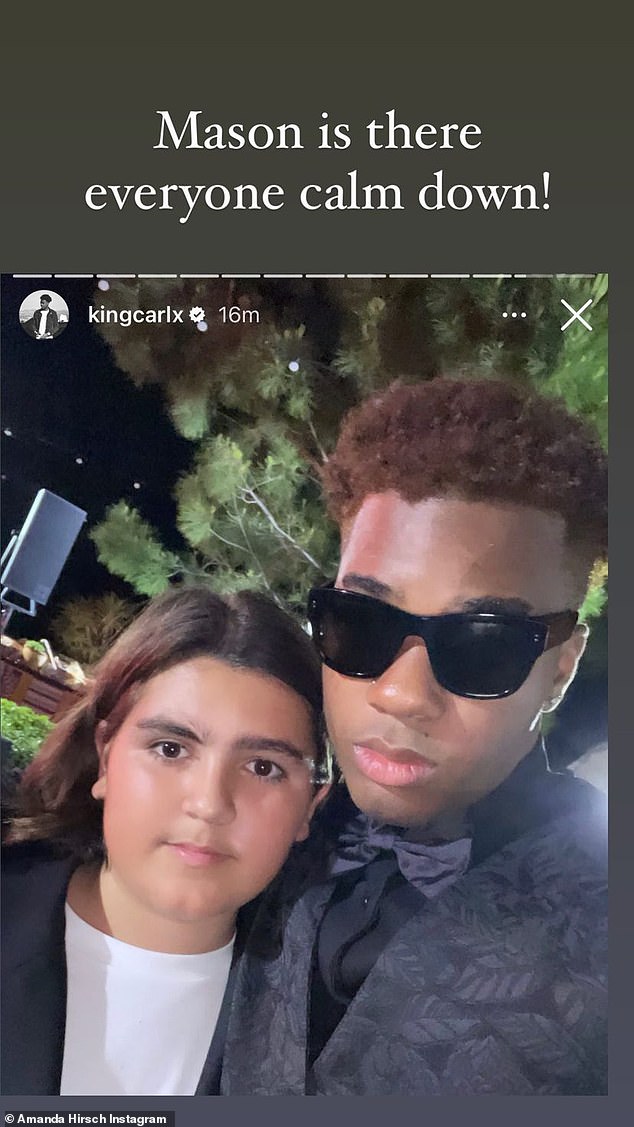 Confirmed: Social media users were relieved when Mason appeared in a photo posted by friend Carl Dawson, who documented the wedding celebrations on his Instagram Stories

Prior to his appearance, Twitter users wondered whether Kourtney’s kids would be at the ceremony, seeing as they were excluded from Barker’s romantic proposal in October 2021.

‘Tensions were high when Kourtney learned her three kids weren’t included in Travis Barker’s proposal – but did Mason, Penelope and Reign miss the couple’s wedding too?’ Us Weekly asked in a Twitter post.

Another Twitter user made a list naming those who had not been seen in any of the wedding photos, writing: ‘MIA at the Kravis wedding (haven’t seen them in any of the pictures).’ 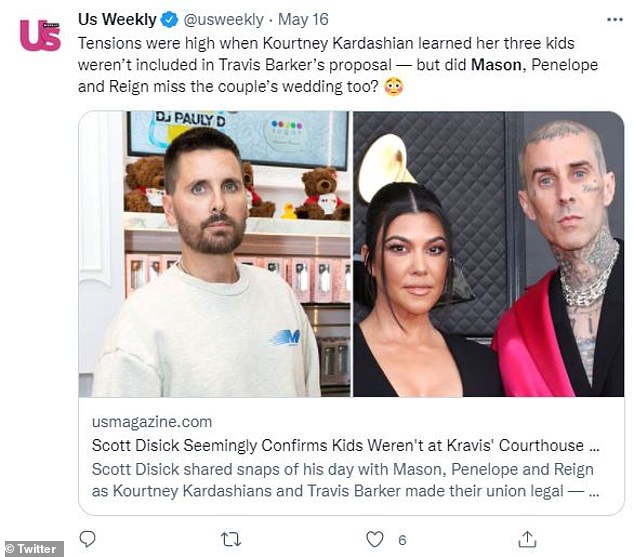 Inquiring: Prior to his appearance Twitter users wondered whether Kourtney’s kids would be at the ceremony, seeing as they were excluded from Barker’s romantic proposal in October 2021 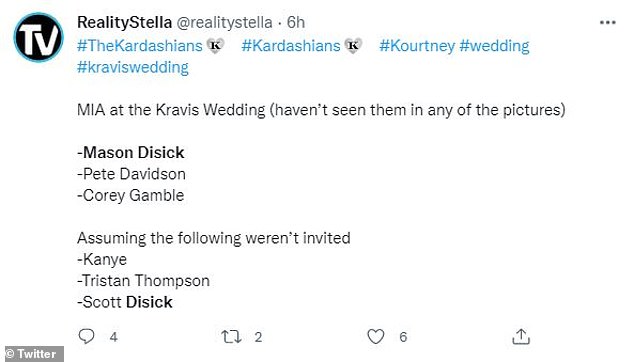 Missing: Another Twitter user made a list naming those who had not been seen in any of the wedding photos, writing: ‘MIA at the Kravis wedding (haven’t seen them in any of the pictures)’

Worried: A fan by the name of @edmundb pondered, ‘Does anyone know if Mason Disick is actually at Kourtney’s wedding in Portofino?! Haven’t seen a single photo… #help’

A fan with the username @realitystella went on to list Mason, as well as his aunt Kim Kardashian’s, 41, boyfriend Pete Davidson, 28, and the family matriarch Kris Jenner’s, 66, other half Corey Gamble, 41, as missing in action.

Another user by the name of @edmundb pondered, ‘Does anyone know if Mason Disick is actually at Kourtney’s wedding in Portofino?! Haven’t seen a single photo… #help.’

Bold: Another person was more presumptuous, boldly asking, ‘Is Mason Disick just not apart of the family anymore? I’m confused??’

Fans: Mason appeared to have many online fans, with @linditweets stating: ‘Was secretly hoping for mason disick!’

While another person was more presumptuous, boldly asking, ‘Is Mason Disick just not apart of the family anymore? I’m confused??’

Mason appeared to have many online fans, with @linditweets stating: ‘Was secretly hoping for mason disick!’

As many users speculated, Mason’s father did not attend the wedding, and was instead spotted enjoying a dinner with Rod Stewart, his son Sean Stewart and daughter Kimberly Stewart at LAVO Ristorante in West Hollywood.

Kourtney and Travis got married for the third time in a romantic ceremony in Portofino on Sunday evening, surrounded by their closest friends and family.

The bride looked sensational in a figure-hugging minidress that showed off her lithe legs, and clung to her curvaceous figure as she said ‘I do’ to the rocker in an alfresco ceremony at the medieval Castello Brown fortress.

The couple also tied the knot in Santa Barbara earlier this week, following a non-binding wedding ceremony in Las Vegas after the 2022 Grammys in April.

The lovebirds got engaged in 2021, after dating for less than a year. The moment was captured for The Kardashians series on Hulu, with the family hosting a dinner celebration afterwards. 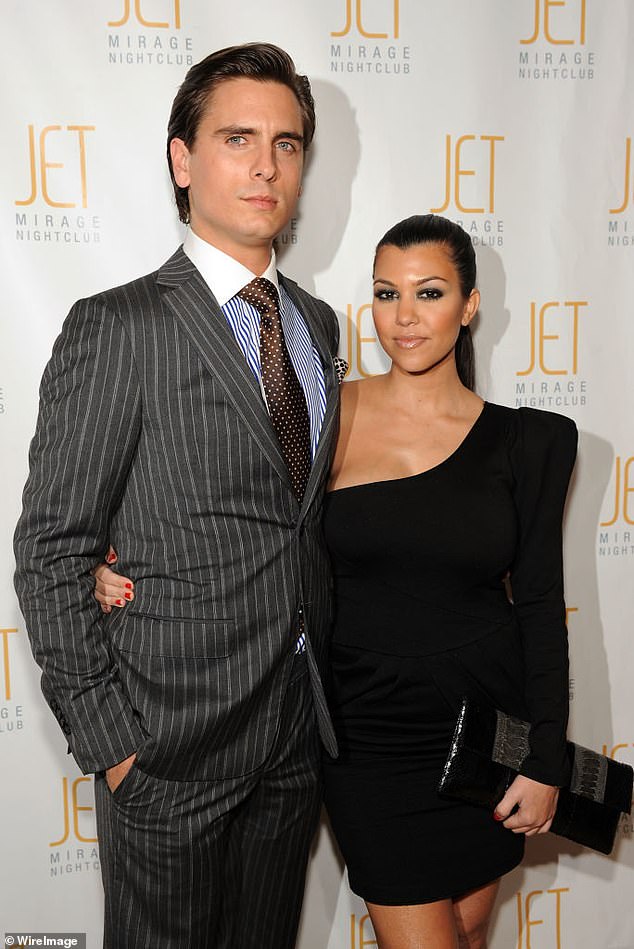 As they were: The reality TV star shares Mason with her ex-boyfriend Scott Disick, 42, along with daughter Penelope, nine, and younger son Reign, seven; Pictured in 2010