It’s a day of celebration for both Mason and Reign Disick.

And while Kourtney Kardashian, 40, and Scott Disick’s, 36, youngest child together has officially turned five, he still enjoys cuddles with his mom.

The reality star took to her social media on Saturday evening to share a heartwarming video of her son hugging her as they laid in bed in their pajamas. 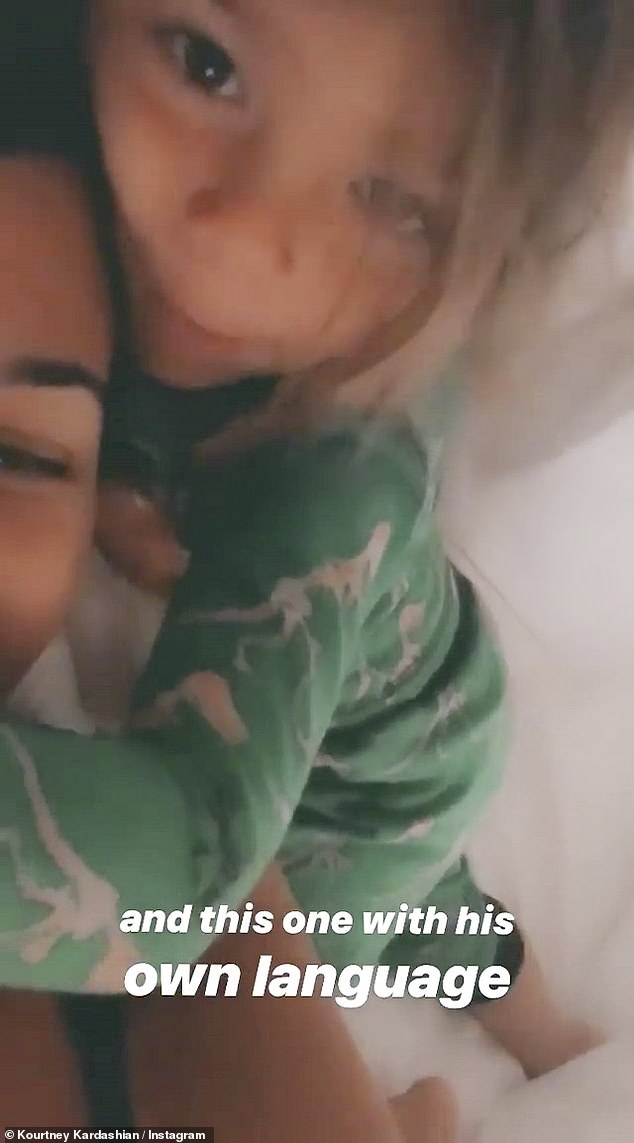 Adorable: Kourtney Kardashian took to her social media on Saturday to share a video of the birthday boy Reign Disick as he spoke in his own language while cuddling with his mom 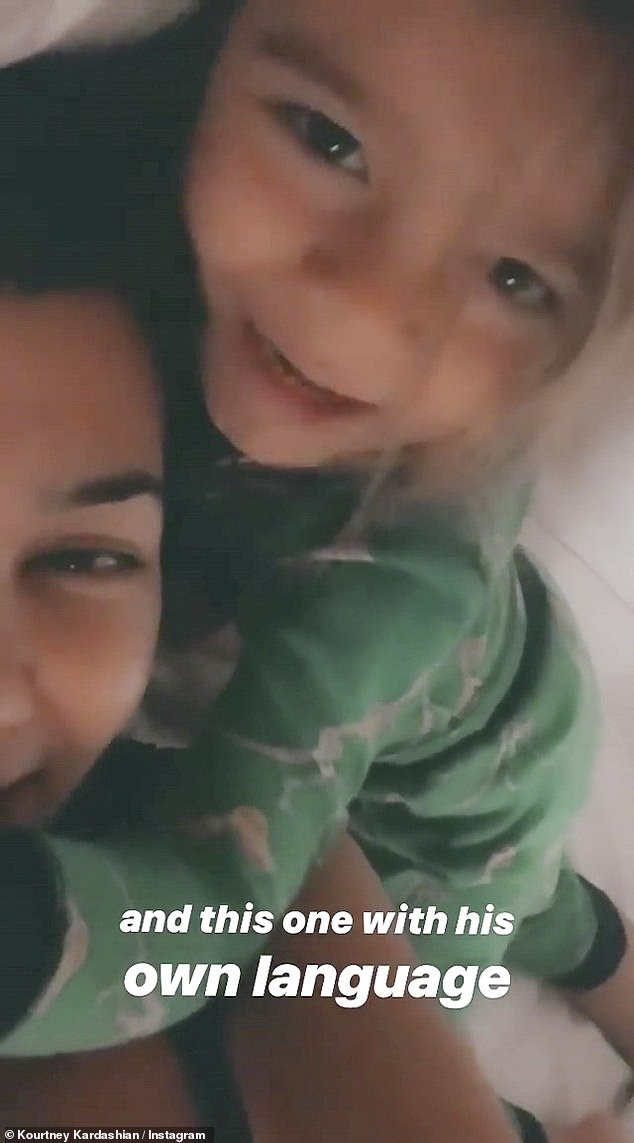 Snuggles: He wore a pair of green pajamas as he wrapped his arms around his mother

‘And this one with his own language,’ she wrote in the video as Reign spoke his own words in the camera.

‘Is five today. Time. Flies,’ she said in the next shot.

For his birthday uniform, he wore a pair of green pajamas with his long hair hanging in his face.

Earlier in the day, she shared a video of her son Mason in what appears to be a massive limo with a sparking silver chain around his neck.

‘My baby is 10!’ she wrote in the clip with a crying emoji while her oldest son playing on his new iPhone.

Mason and Reign also got birthday shoutouts from the Lord Disick himself on his social media channels sharing a picture with each son. 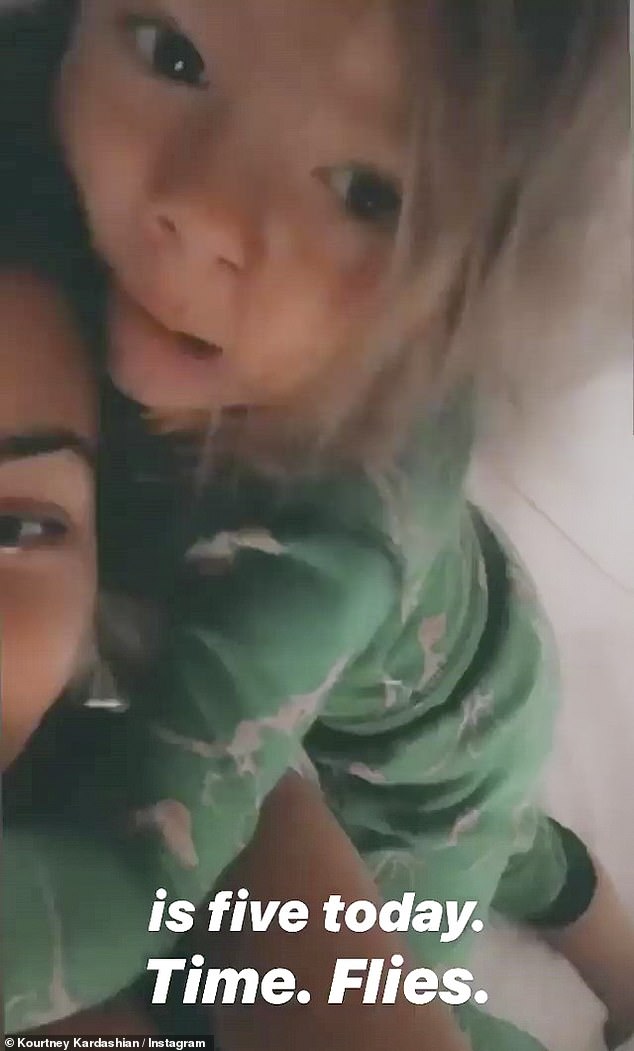 Having fun: Reign appeared to have fun showing off for the camera 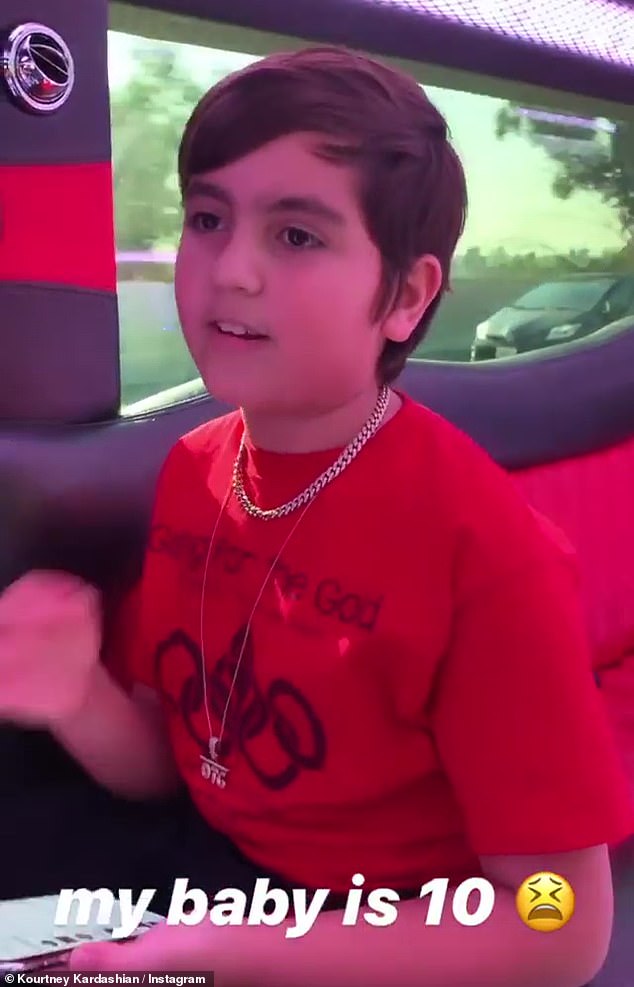 Growing up: Mason looked like a Scott Disick mini-me while out with his mom 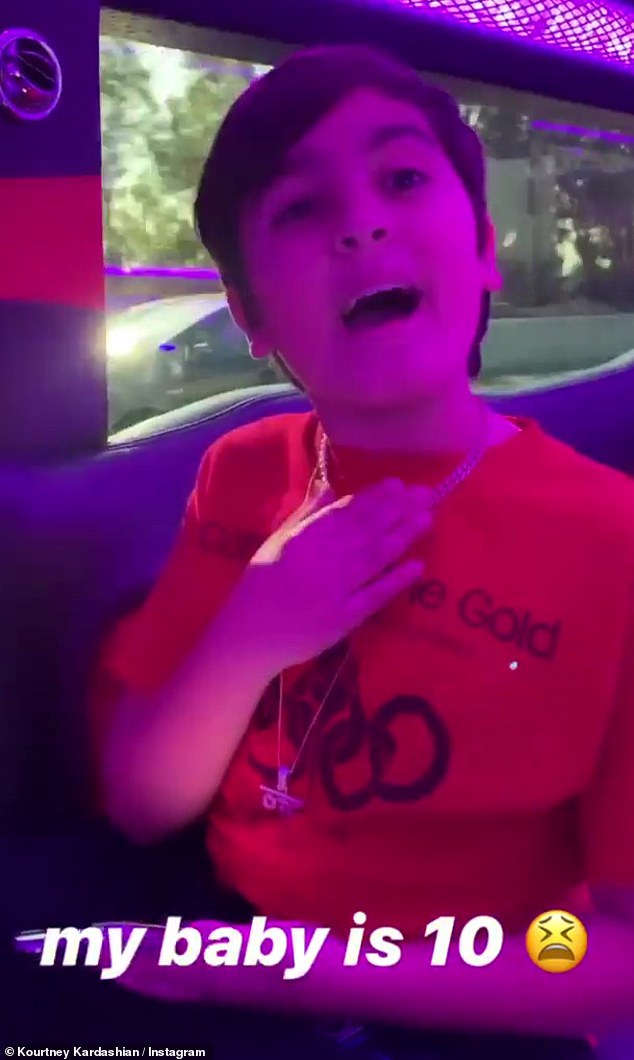 Looking cool: Mason wore some cool necklaces and a red t-shirt while riding around in the limo for his birthday

Recently, the fitness-enthused mom announced that she wouldn’t be appearing as much as her famous sisters on their reality series, Keeping Up With the Kardashians so she could spend more time with her kids.

‘I just decided to spend more time as a mom and put more of my energy there, but I’m not saying goodbye,’ she said during an interview with ET.

‘I think you’ll have to see more of it on the new season, season 18. It isn’t airing yet, but it’s being filmed. Currently, in this room.’ 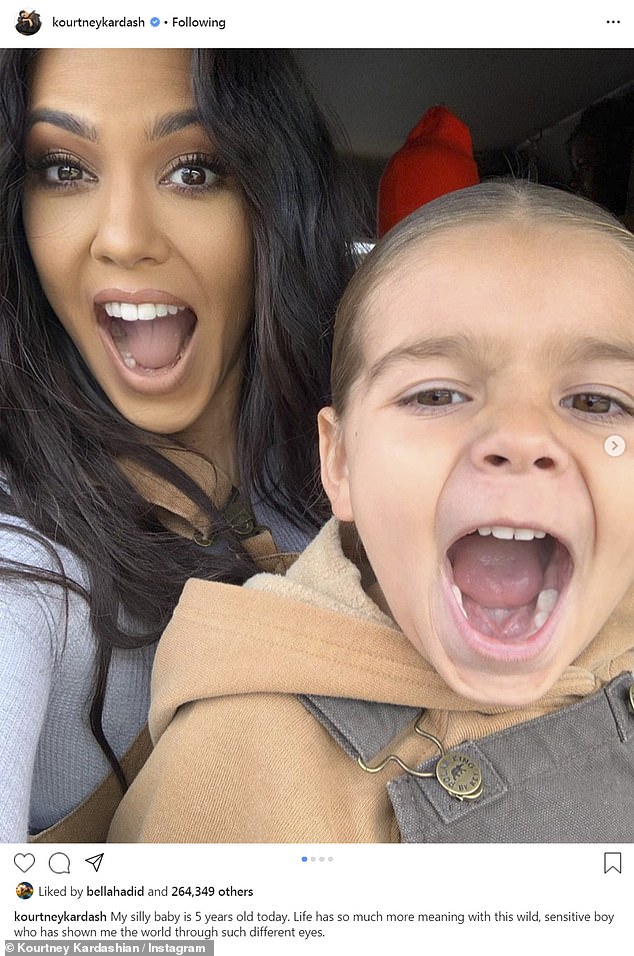 Silly baby: Kourtney and Reign make some funny faces as they celebrate his birthday 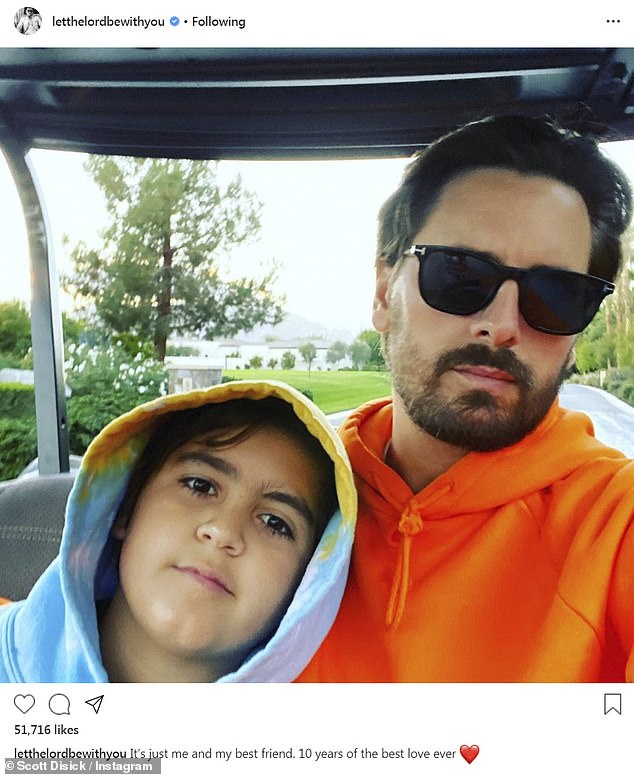 Best friends: Scott Disick shared this photo of his mini me while out enjoying the weather 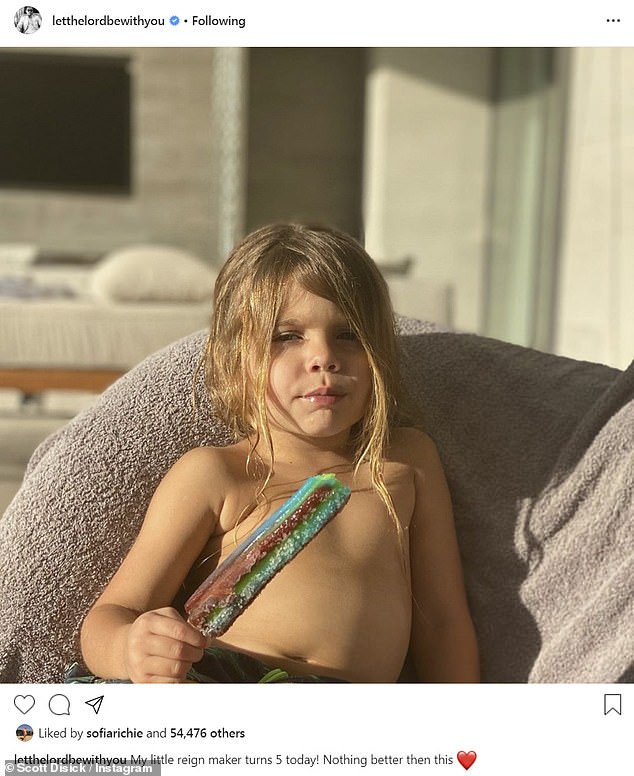 Birthday boy: Scott shouted out his ‘little Reign’ on his birthday 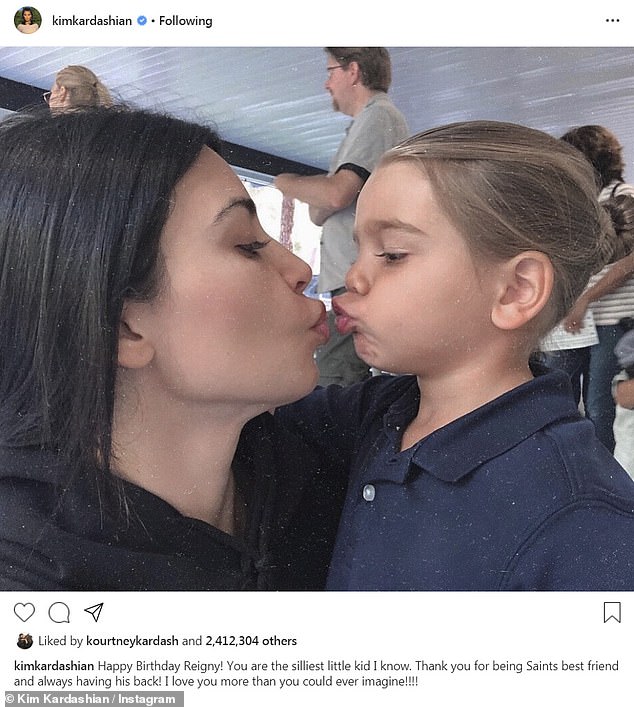 Puckered up: Kourtney’s sister Kim Kardashian wished Reign a happy birthday with a sweet Instagram photo of the two puckered up for a kiss 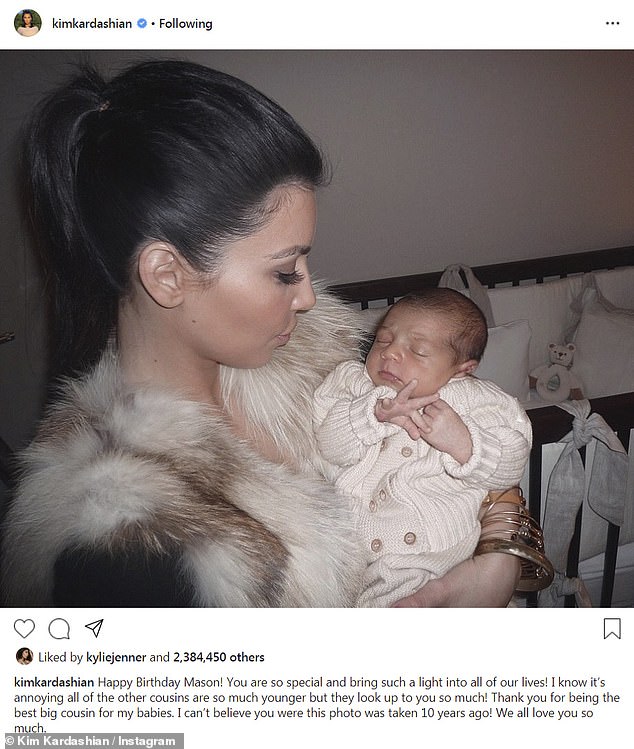 Perfect timing: She also posted an adorable photo of Mason as a baby. He was born exactly five years before his little brother Reign