She admitted she ‘hit rock bottom’ during her ‘very tough’ divorce from ex-husband Paul Sampson in 2015.

But Kirsty Gallacher looked radiant as she shared a sizzling Instagram snap while playing in the fresh water lagoon in Grazalema, Spain, on Thursday.

The TV presenter, 42, showcased her toned and tanned physique as she modelled a pretty black bikini decorated sea shells. 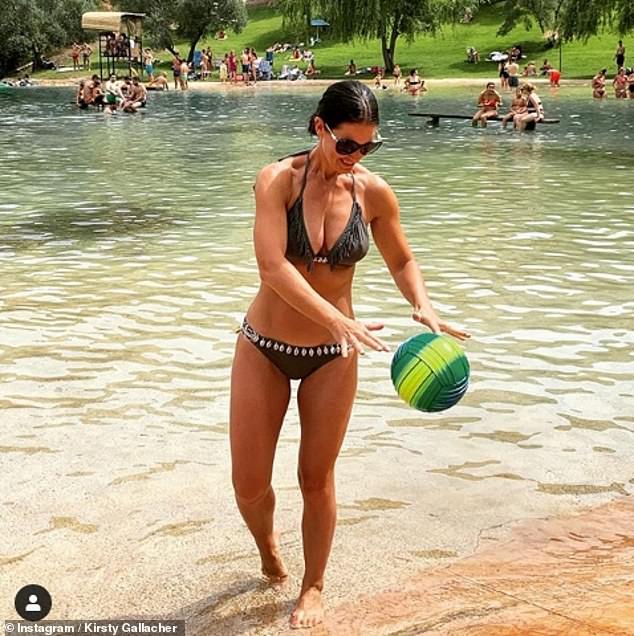 Fun in the sun: Kirsty Gallacher looked radiant as she shared a sizzling Instagram snap while playing in the fresh water lagoon in Grazalema, Spain, on Thursday

The broadcaster beamed with happiness behind a pair of sunglasses as she played with a green ball in the shallows.

She captioned the offering: ‘Fun with the family (usually involving a ball) in #sierradegrazalema at the stunning fresh water lagoon.’

Proving she is having a great holiday with her two sons, Oscar, 12, and Jude, nine, the television personality shared a series of holiday snaps from their family Spanish break.

Taking to her stories, Kirsty explored the Arcos de la Frontera Cathedral and strolled through the scenic streets of the city. 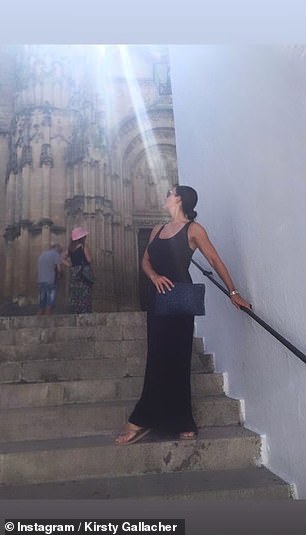 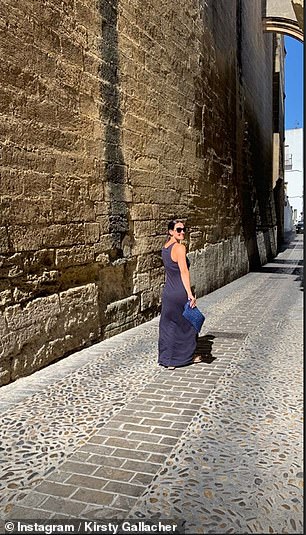 Scenic: Taking to her stories, the TV presenter, 42, displayed her love for exploring and culture as she took in the sights of the city

For her day of soaking up the sights, the stunning star kept cool in a navy blue maxi-dress and tied her tresses back in a chic bun.

Kirsty also shared some snaps with her children, in one she visited a stable where she joked in the caption: ‘We were tempted…..’ as they looked on at a white stallion.’

The doting mother could be seen wrapping her arm around one of her sons as she covered herself in a bright red kaftan.

Keeping active on their trip, another image showed one of her boys enjoying a round of golf. 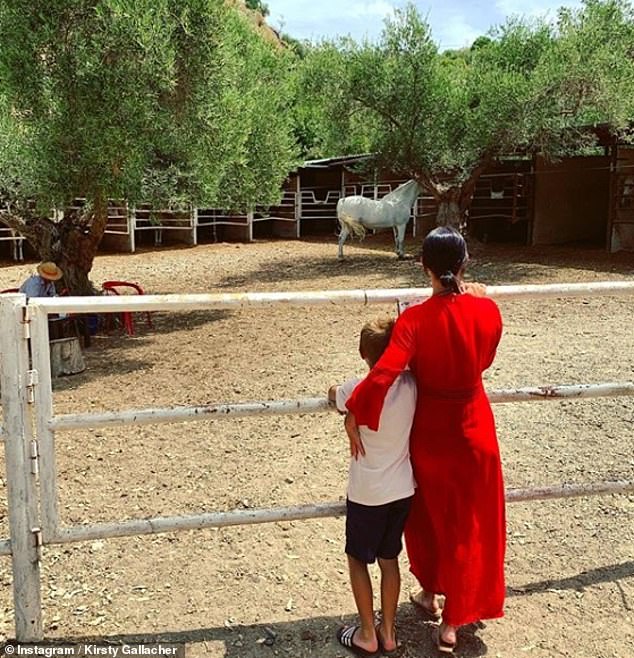 Quality time: Kirsty also shared some snaps with her children, in one she visited a stable where she joked in the caption ‘We were tempted…..’ as they looked on at a white stallion’ 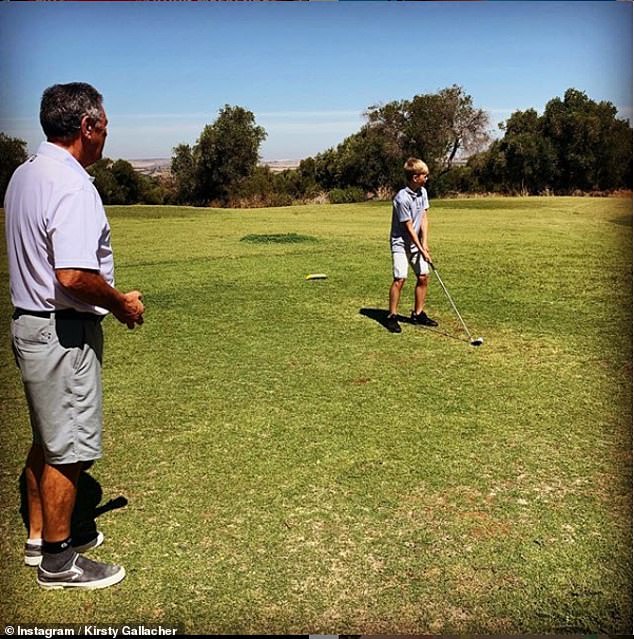 Sporty: Keeping active on their trip, another image showed one of her boys enjoying a round of golf in the sunshine

Kirsty discussed her painful marital split, dating again and seeking advice from her brother-in-law Russell Brand, 44, as she spoke to Lisa Snowdon on new Fabulous podcast Things I Told My Daughter on Thursday.

The star was interviewed alongside her mother Lesley and revealed Russell helped guide her through ‘grief, trauma and abandonment issues’ in the wake of her divorce by offering some sage advice.

Kirsty and former rugby player Paul Sampson, 42, parted ways in 2015 after five years of marriage and continue to raise their two children.

She said: ‘It’s very upsetting, I feel like I was blaming myself for everything. I’m sure Paul was doing the same. Because you have children in your care. It’s a horrible, horrible burden.’ 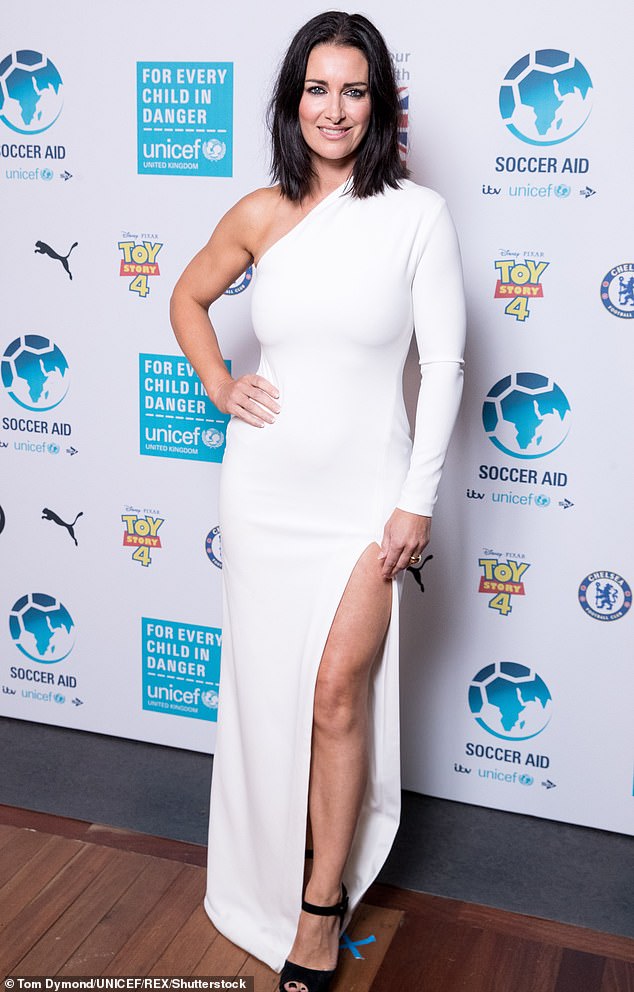 ‘The last three years have been very tough’: Kirsty recently opened up about her divorce and struggling to date again (pictured in June)

She added: ‘The last three years have been very tough but it is for anybody getting divorced.

‘Because you go through not only grief, but trauma, almost separation anxiety and abandonment issues in a way. I have talked about before the fact that you come out of it and you feel like you need to be with someone else.’

Since splitting from her husband, Kirsty has been linked to comedian Jack Whitehall, 31, and rugby player Danny Cipriani, 31.

But her brother-in-law, actor and comedian Russell Brand, offered wise counsel in her time of need. 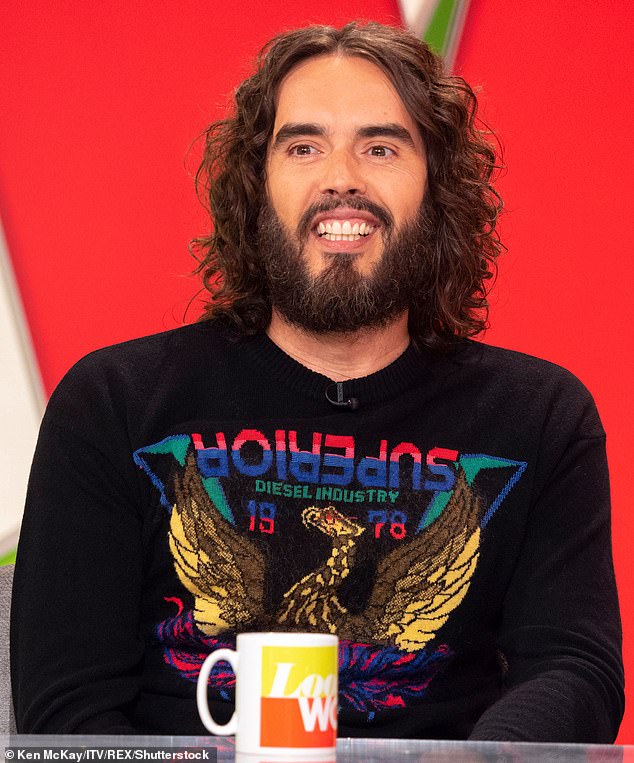 Words of wisdom: The presenter said brother-in-law Russell Brand (pictured in May 2018) gave her great advice to remain single and rediscover herself 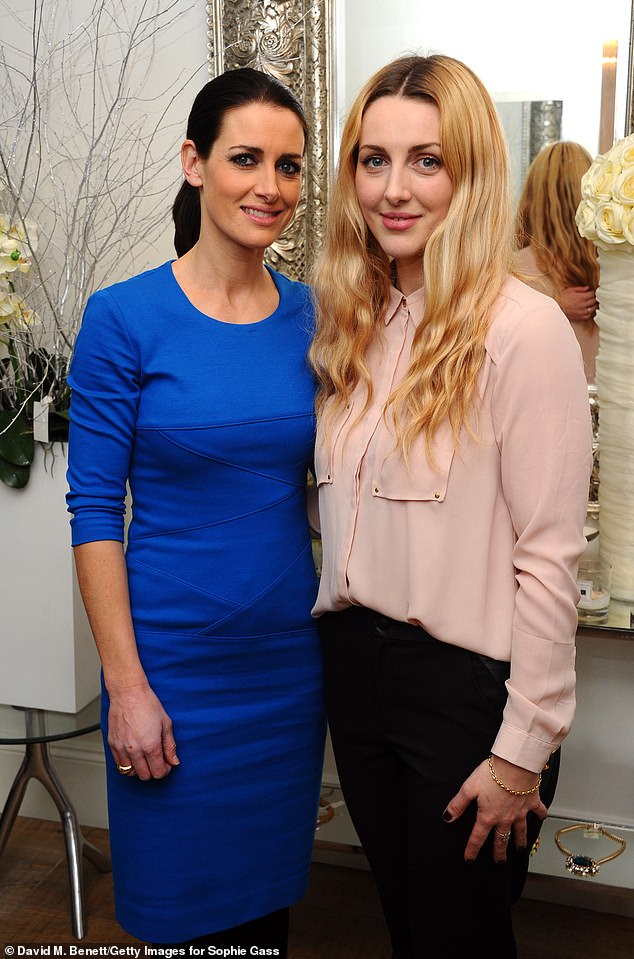 Close family: The comedian turned over a new lead when he fell for Kirsty’s sister Laura (the siblings pictured in 2014); the pair wed in 2017 and have two young daughters together

He turned over a new leaf when he fell for Kirsty’s sister Laura; the pair wed in 2017 and have two young daughters together.

Kirsty explained: ‘Russell said to me, “You just need to be on your own for a while”. And I didn’t listen to him at that point and I just went, “Oh no, I’m not sure I do”.

‘And now I obviously say to him, “You were right” because I’m in a good place and you have to heal. However or wherever that journey takes you.

‘You can hit rock bottom like I did, as soon as you get well again you look back and think “I meant to have gone through this to be where I am now”.’ 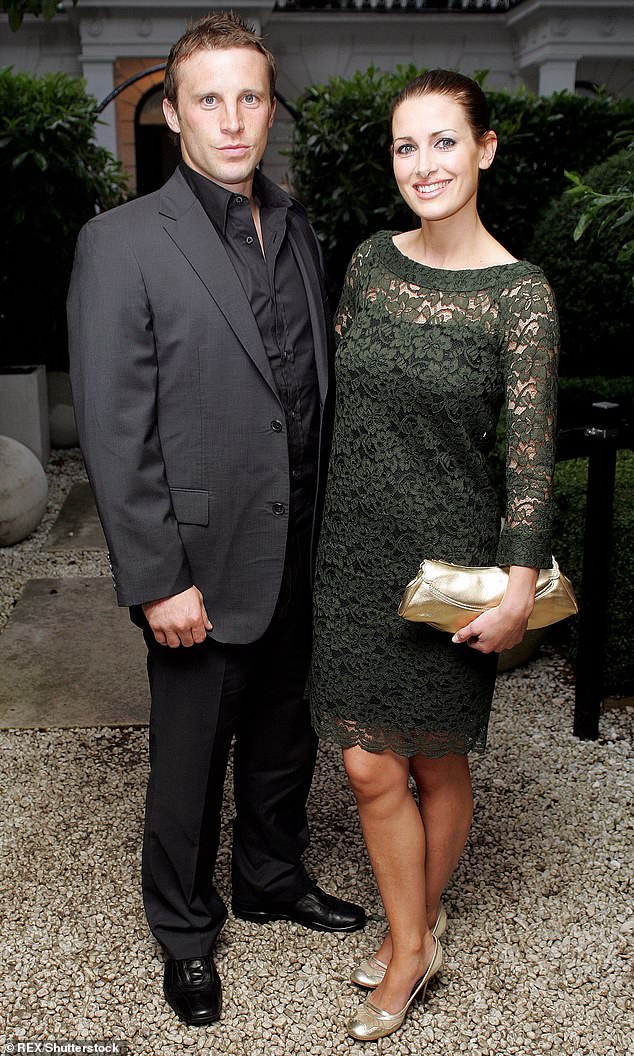 Split: The star, 43, who appeared on the podcast alongside her mum Lesley, recalled her difficult split with ex-husband Paul Sampson in 2015 (pictured in 2007)