Kimberley Walsh has come under fire from animal welfare charity PETA after sharing photographs of her and her family swimming with a captive dolphin.

The Girls Aloud star, 39, shared the snaps from Dubai during their recent holiday and can be seen smiling widely, with her arm wrapped around the dolphin’s fin.

PETA’s Director Elisa Allen said in a statement to MailOnline: ‘For crying out loud – hasn’t Kimberley seen The Cove? If she had, she’d understand that dolphins used for these encounters are often violently torn away from their families and ocean homes. 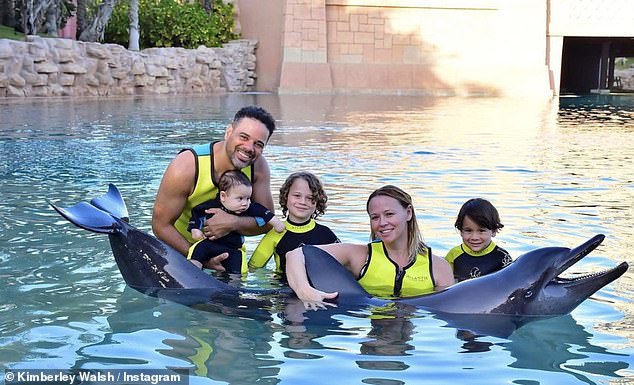 ‘Shame on you!’ Kimberley Walsh, 39, has sparked outrage after sharing photographers of herself and her family swimming with captive dolphin in Dubai, during their recent holiday

She continued: ‘Instead of exploring, raising their young, and swimming vast distances, dolphins in captivity are forced to spend decades performing confusing tricks in cramped tanks while being fondled by strangers.

‘PETA has contacted Kimberley with this information, which we hope will open her eyes to the plight of captive dolphins and will encourage her never ever to support industries that imprison wild animals for profit.’

Kimberley was surrounded by her three young sons Bobby, six, and Cole, four, and baby Nate, five months who was held up by her husband Justin Scott for the snap.

The star also uploaded a snap of eldest child Bobby looking pleased while kissing the bottlenose dolphin on its rostrum. 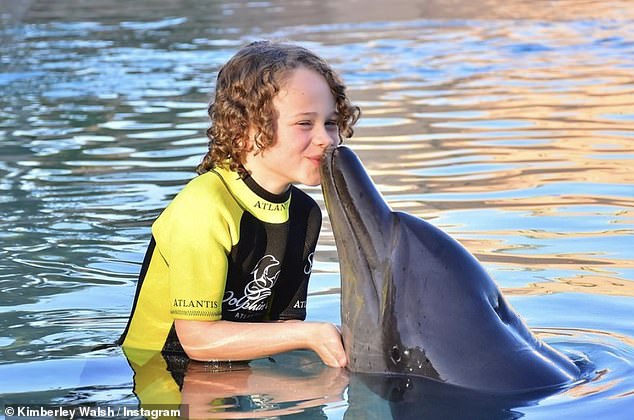 Controversial: The star also uploaded a snap of eldest child Bobby looking pleased while kissing the bottlenose dolphin on its rostrum

Kimberley was quickly swamped with overwhelmingly negative comments from disappointed followers, who were angered by the photographs.

One follower wrote: ‘Definitely not a good idea. V disappointing. Do your own research on animals in captivity and then I hope you can use your platform to educate your followers wisely.’

‘Dolphins belong in the sea. Shocked and disgusted to see a high profile celebrity promoting this cruelty. Shame on you,’ fumed another.

Someone else commented: ‘Extremely disappointed #emptythetanks dolphins belong in the ocean not fish tanks where humans can profit off their suffering.’

‘What part of you thinks that wild animals kept in tiny tanks purely for profit, human entertainment and photo ops is something you should be proud to be encouraging? asked another furious follower.

Furious: Kimberley was quickly swamped with overwhelmingly negative comments from disappointed followers, who were angered by the photographs

‘Really disappointed to see you supporting animal cruelty. Animals are not entertainment. That beautiful dolphin should not be in captivity to be exploited,’ slammed someone else.

‘This really isn’t something you should be promoting. I really hope all these shocked comments will be a wake up call to educate yourself. x.’ noted another person on Instagram.

‘Hugely disappointing that someone with your status in 2021 would fund and advocate such cruelty. A quick research would have highlighted all you needed to know about such attractions are never in the best interest of the animals,’ argued someone else.

In June, the Mysterious Girl singer posted a video featuring the 13-year-old daughter he shares with ex-wife Katie Price on holiday in Portugal on YouTube.

The reality star was then contacted by PETA, who educated him in the ‘damage done to dolphins in captivity’.

The one-time pop star wrote in his new! magazine column: ‘It was a case of Peter vs PETA recently after I revealed I had edited footage of Princess swimming with dolphins in Portugal when I was contacted by them. 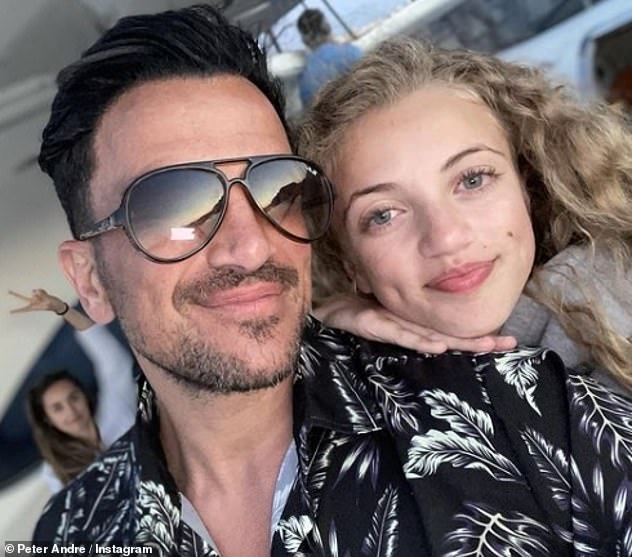 ‘The animal rights group weren’t necessarily having a go – just trying to get the point across about what goes on with dolphins in captivity. Initially, I just thought, ‘wouldn’t this be a brilliant experience for my daughter as it’s her dream?”

He revealed that the organisation sent him a letter explaining what happens to dolphins who do not live in the wild, and added that people have the option to look away or become educated and make others aware, which he has chosen to do.

The Australian star concluded: ‘At the end of the day, we’re always learning and I’m not going to get everything right every time. I’ll make sure I’ll continue to make mistakes, but I’ll try not to make the same ones twice.’